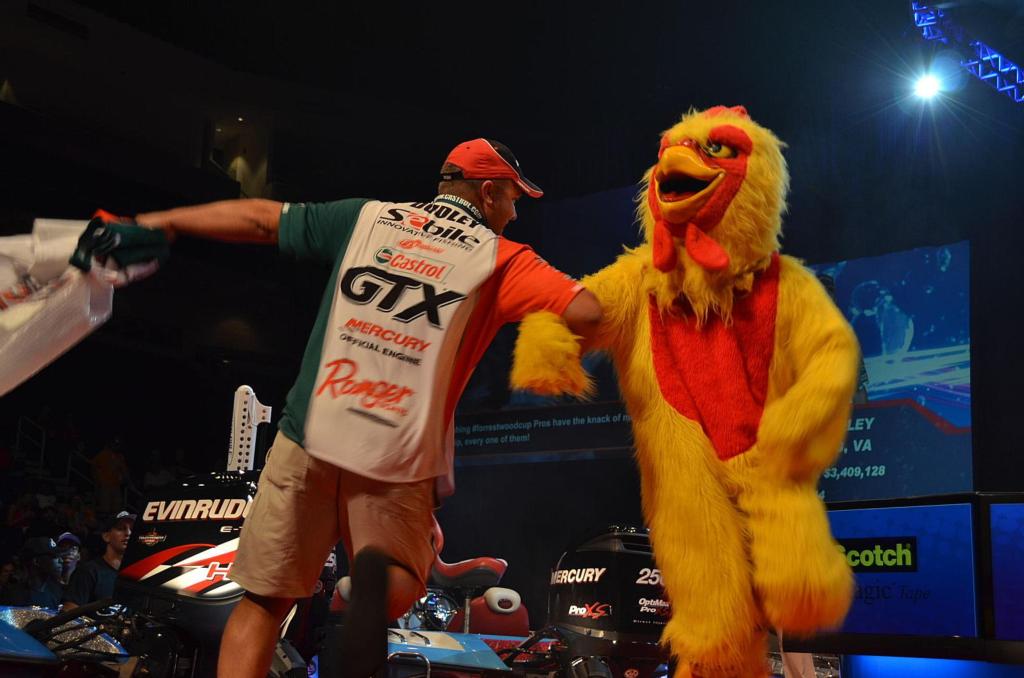 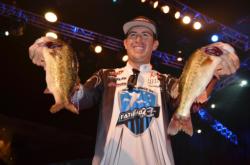 Wheeler lands counterpunch … After stunning the field with a dramatic 21-pound, 15 ounce stringer on day one, 21-year-old pro Jacob Wheeler of Indianapolis, Ind., suffered through a mediocre day two, coming back to the field with a modest 11-pound, 12 ounce bag. In the process, the young pro saw his commanding lead shrink to a shade over 3 pounds. As such, a number of big-gun pros were able to significantly close the gap. At that point, the convenient and easy narrative was that Wheeler, an FLW Tour rookie this season, would ultimately collapse from the pressure as he faced off against a loaded field that included six former Forrest Wood Cup champions and six FLW Tour Angler-of-the-Year title holders. But a strange thing happened along the way during today’s competition. After the majority of the top-20 pros struggled to bring in a significant limit to the scales of any kind, Wheeler stepped onto the stage and showed off the biggest bag of the day – a 14-pound 7-ounce sack. Not only did the young upstart not wilt under pressure, but he built his lead back up to nearly 6 full pounds, giving himself some much needed breathing room heading into tomorrow’s finals. “Of course I’ve been nervous, it’s the biggest tournament of my life,” said Wheeler. “But you need to put all of that (pressure) in the back of your mind and just go out there, keep your head down and go fishing. Once I was able to start catching fish and get that momentum back, I was really able to calm down. But having a 6-pound lead is definitely more comfortable.” Wheeler said that he’s caught keepers over the last three days on seven or eight different baits. “I’m junk fishing really,” he said. “I’m using a lot of different baits and fishing the conditions – that’s Indiana fishing. That’s what I’m used to doing and that’s what I’m comfortable with.” Wheeler said one of his primary fishing spots is something he calls the “pig pen” – a nice little stretch of real estate with some good cover that currently houses a lot of larger-sized largemouth. “I’m fishing up river in about 5 feet or less and there is a lot of cover in that area,” he said. “I’m looking for current breaks and if we get a little bit of rain that seems to help my bite as well.” As for tomorrow, Wheeler said he is ready to go. “I’m just going to go out there, fish hard and whatever happens, happens. If it’s meant to be, it’s meant to be.” 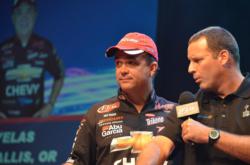 Team Chevy continues to dominate … Although Wheeler has found himself atop the leaderboard after each of the last three days of competition, Team Chevy has managed to place its own stamp on this year’s Cup in fairly dramatic fashion. Heading into today, four Team Chevy pros had qualified for the top-20 cut. After today’s weigh-in, all four anglers had advanced to the final round of 10. The impressive list of Chevy anglers fishing for a title on Sunday include: Bryan Thrift of Shelby, N.C. (third place with 39 pounds, 15 ounces); Jay Yelas of Corvallis, Ore. (fifth place with 37 pounds, 2 ounces); Luke Clausen (sixth place with 37 pounds) and Dion Hibdon (10th place with 35 pounds, 3 ounces). 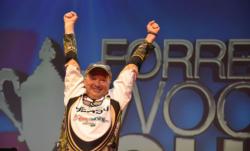 Colonel crowned co-angler champion – After serving 38 years in the military and the Air National Guard, Timothy Dearing finally retired to pursue his passion of tournament bass fishing. However, while Dearing was more than happy just to be competing, he had no idea what was in store during this year’s Forrest Wood Cup. After posting a three-day catch of 22 pounds, 13 ounces, Dearing managed to walk away with a Forrest Wood Cup title, a $50,000 first-place prize and enough memories to last a lifetime. “I had an opportunity to become a general but my wife said to me, `Why don’t you just retire, go fishing while you’re still healthy and follow your dream.’ Being in the military I’m very goal oriented and I had two goals for this season – to get one top-10 finish and qualify for the Cup.” Obviously, he managed to do much more than that. And in the end, Dearing can now call himself Forrest Wood Cup champion. “This is just an awesome experience,” he said. Dearing, who fought back tears onstage, also credited FLW Tour pro Brandon Coulter with taking him under his wing and teaching him the finer arts of tournament fishing. “I traveled with Brandon all year,” he said. “And I wouldn’t be here without him.”

Heartbreak hotel co-angler edition … After leading the Co-angler Division for two consecutive days and boasting a 2-pound lead over his next closest competitor heading into the final day of competition, Matt Krekovich of Granite City, Ill., appeared to be in perfect position to net the prestigious title of Forrest Wood Cup champion as well as a $50,000 first-place payday. However, unfortunately for Krekovich, an on-the-water rules violation sabotaged those hopes. While his pro partner, day-one pro leader Jacob Wheeler, moved from the front of the boat to cull a fish, Krekovich continued fishing – a specific violation of FLW Rule #10. As Forrest Wood Cup host Chris Jones explained onstage, “While the pro is not on the front of the boat, the co-angler cannot fish. It was an honest mistake (by Krekovich), a mental mistake but that’s how it goes sometimes.” As such, Krekovich was credited with a catch of zero pounds on day three. However, if there was a silver lining, it was that Krekovich was able to keep his weight for day one and day two which was good enough for a fourth-place finish overall. While the experience was undoubtedly hard to swallow for the Illinois native, he at least walked away with $10,000 in winnings for his efforts. 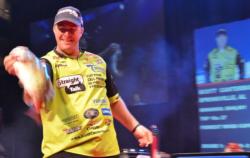 The Chicken Dance part III … As promised Castrol pro David Dudley entered the stage once again to his infamous “Chicken Dance” song. However, this time he brought along a friend – an unnamed individual actually dressed in a giant chicken costume. So as Forrest Wood Cup fans looked on, Dudley and the chicken danced around the stage, easily creating one of the more surreal scenes of the entire tournament to date. Dudley also made good on his promise to throw a few lucky members of the crowd an autographed jersey. The only requirement to being awarded the jerseys – they had to prove that they were able to “out-dance” him.

0: The number of anglers who have won two Forrest Wood Cup titles.

0: Total number of limits caught in the Co-angler Division during today’s competition. 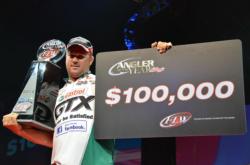 4: The number of pro anglers (Scott Martin, Luke Clausen, Andy Morgan and David Dudley) who finished in the top 10 in Forrest Wood Cup competition in 2011.

5-13: The total weight in pounds of ounces separating first-place pro Jacob Wheeler from his next closest competitor (Scott Canterbury) after the third day of Forrest Wood Cup competition.

11: Total number of stringers recorded over 14 pounds during the first three days of 2012 Forrest Wood Cup competition on Lake Lanier.

12-15: The amount in pounds and ounces separating the top-10 pros heading into the final day of 2012 Forrest Wood Cup competition.

78-0: Total weight in pounds and ounces of fish caught on day three by co-angler field.

201-13: Total weight in pounds and ounces of fish caught on day three by pro field.

500: Total first-place prize award in thousands earmarked for the winner of the 2012 Forrest Wood Cup. 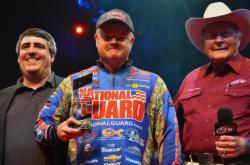 “It’s such a great honor from such a great organization. I have to thank Goodwill,” – National Guard pro Mark Rose upon winning the inaugural FLW/Goodwill Sportsmanship award.

“I’m a little surprised myself,” – FLW Tour pro and Lake Lanier expert Tom Mann Jr., remarking on how incredible the largemouth bass bite has been at the Cup this week.

“I guess you get applauded for being old, and that’s good,” – Co-angler Doug Caldwell joking about the crowd applause after revealing that he’ll soon be turning 75 years old.

“I’ll tell you what, it’s hard to fish behind a vacuum cleaner,” – Co-angler Mike Devere with regard to sharing the boat with 2012 AOY winner David Dudley in today’s competition. 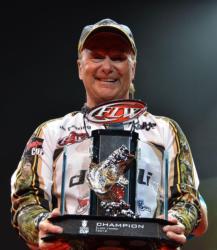 “I’ve been in four wars, but I’m extremely nervous right now because I’m not in control (of my own destiny),” – Eventual co-angler Forrest Wood Cup champion Timothy Dearing, who spend 38 years in the military but had to sweat out final weigh-in.

“I completely missed the boat,” – National Guard pro Brent Ehrler on how he misread the potential of the largemouth bass bite this week on Lake Lanier.

“Today is the day I’m going to put out of my mind,” – Castrol pro David Dudley lamenting the fact that he lost a 7-pounder, a 5-pounder and three 4-pounders during today’s competition.

“I’m not so sure. There might be an extra guy show up the way my luck is going,” – Chevy pro Dion Hibdon jokingly refusing to believe that he had mathematically qualified for the finals as he weighed in his catch.