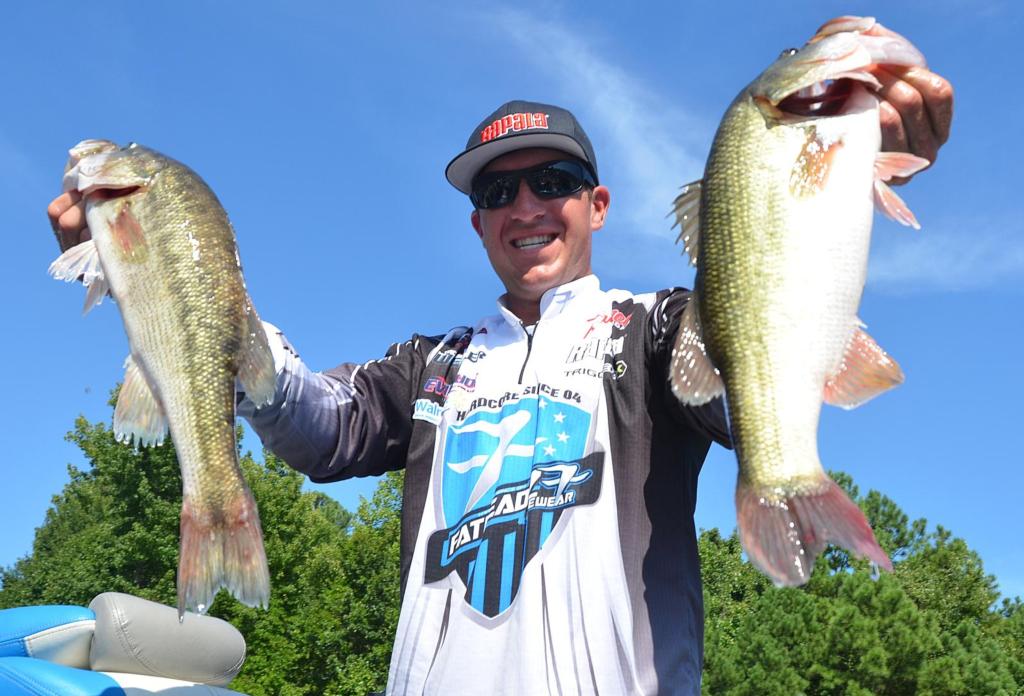 DULUTH, Ga. – At 21 years of age, Jacob Wheeler is barely old enough to sip his hard-earned victory champagne. But he executed a game plan and held his composure like a seasoned veteran at the 2012 Forrest Wood Cup on Lake Lanier.

During prepactice, Wheeler used a jet boat to explore the far end of the Chattahoochee River. He got the idea from fellow Rapala Pro Staffer Ott Defoe, who did it somewhat successfully back at the 2010 Cup. The first two days Wheeler confidently caught 13- and 14-pound limits. But there was one major problem. His tournament boat wouldn’t allow him to access much of that productive water. After 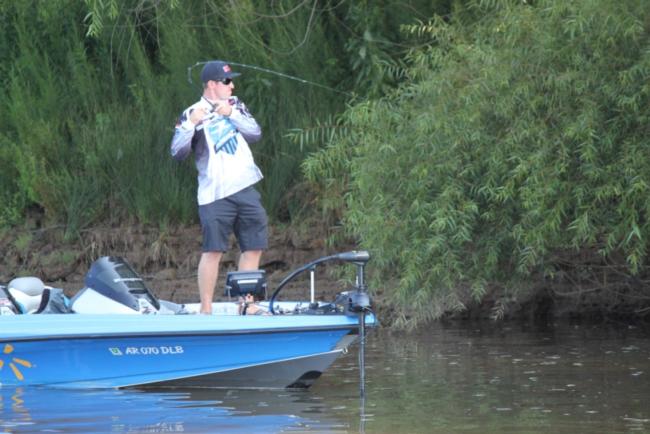 exploring other vessel options, Wheeler decided to travel as far as his Ranger would let him. To his surprise the largemouths were still biting slightly downriver; the potential was there.

What Wheeler didn’t know was that the river’s current breaks held a few 5- and 6-pounders. The Fatheadz pro caught an unimaginable 21-pound, 15-ounce limit on the first day of the tournament to open up a 6-pound lead. From there, each day was a balancing act of saving water and managing his fish. On day two he simply wanted to be consistent and put a limit in the boat. The next day he pushed the pedal a little more so that he simply had to catch a limit Sunday to claim the Cup.

Amazingly, there were never any missteps, miscalculations or mistakes. The bite was not great on the final day (he caught only six keepers) but Wheeler had more than enough to walk away as the youngest pro ever to win the Forrest Wood Cup.

“It was a struggle today,” said the Indianapolis, Ind., native. “The whole time I tried not to think about the money or the Cup. Every time I sat down to run to the next spot I might have been jittery, but I realized I had to stay focused and fish at 100 percent and capitalize on every single bite.”

bluegill beds, which were still up spawning from a recent full moon. Once he had a solid limit, he would head south to the clearer water.

“The river was the area I felt I could catch five fish. But a lot of the big ones were around bluegills.”

Wheeler’s most productive flipping bait was the new Trigger X Goo Bug, which recently debuted at ICAST. When he fished around bluegills, Wheeler threw topwaters – mainly the X-Rap Prop. He termed his pattern Indiana fishing as he mixed in a variety of lures to give the bass different looks. Other prominent river baits included a vibrating jig and a Rapala Skitter Walk. All were fished in water less than 4 feet deep. Around the docks and bluegills, he occasionally mixed in a shaky head and a Flutter Worm.

Wheeler’s day-four weight was 11 pounds, 15 ounces. He essentially sealed the tournament with a kicker largemouth at 2 p.m.

“There was this one bluegill bed that I’d been saving for the final day and I know there were bass there because I had seen three on it before in practice. I made a cast and twitched it three times. The whole 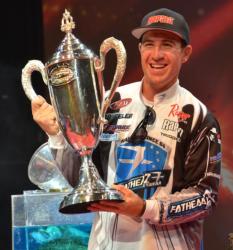 time I was thinking it was going to be another one of those 4-pounders that just follow 4 inches from the bait. I twitched it one more time, let it pause for four seconds and she came up and annihilated it – just swallowed it whole.”

Wheeler finished the four-day event with 60 pounds, 1 ounce and won by over a 7-pound margin, the largest in Cup history. His $500,000 check more than tripled his previous career earnings. In consecutive seasons, the young phenom has captured two of bass fishing’s most prestigious events – the All-American and the Cup.

“I’m truly blessed,” Wheeler added. “It’s an honor to be sitting in this seat right now at this age. In 100 years I never would have thought I could be sitting here next to the Forrest Wood Cup.”

While it varied from largemouths to spotted bass, Canterbury brought at least one big fish to the scale every day. His final-day limit weighed 10 pounds, 7 ounces, giving him a four-day total of 52 pounds, 12 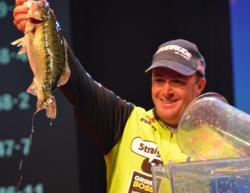 “I lost one fish in the brush today, but other than that I pretty much fished flawless all week,” said the Springville, Ala., native.

While the buzzbait was straightforward, Canterbury’s double drop-shot rig consisted of nose-hooked Jackall Cross Tail shad on top and then a Flick Shake below it. The Cross Tail shad would be 4 feet up from his 1/2-ounce weight and the Flick Shake would sit 10 inches up.

“That was the only presentation I knew where I could go behind people after they left and catch one. I think it was something those spotted bass haven’t seen out there.”

Canterbury had one brush pile in particular that coughed up three of his biggest bass. He hit it five times Sunday and on the fourth try it coughed up his 4-pound kicker. Most of his 50-plus spots were located mid-lake towards the south end.

His consolation prize was a $100,000 check, the largest in his five-year career.

“From practice to the tournament, I gave it my all and I put everything into it.” 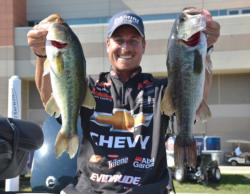 For much of the week, Chevy pro Bryan Thrift bounced back and forth between the shallow and deep water. As the tournament wore on, he knew he would have to spend more time largemouth fishing up shallow if he was going to have a chance at catching Wheeler.

But the largemouth bite was extremely slow Sunday morning. In fact, Thrift had no keepers in the livewell at noon.

“I decided to run up the river to a brush pile I had under a dock,” said the Shelby, N.C., native. “I caught like 25 keepers but they didn’t weigh much at all. But then at least I could relax with a limit.”

Thrift discovered late in the tournament that the cruising largemouths would actually eat a shaky head better than a topwater. Earlier he was getting most of his largemouth bites on a Damiki D-Pop 70 and a Barry’s prop bait. He sampled both rivers, but spent most of his time running and gunning around marinas and flat banks in the mid-lake area. Covering insane amounts of water, Thrift estimated he spent roughly $170 per day on fuel.

“I think by the end of the week those fish were topwater’d out. I wish I would have figured it out earlier; I guess I was a little hard headed. But I caught all of my keepers today on a shaky head with a 6 1/2-inch Damiki Finesse Miki. The key was being stealthy. If you could get a bait over to the bass before it saw you, it would at least show some interest if not bite.”

“Having a good Forrest Wood Cup can really make your year.” 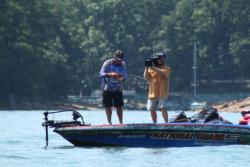 For the first time all week, defending Forrest Wood Cup champion Scott Martin weighed a largemouth. In fact, it was one of the bigger bass in his 12-pound, 1-ounce limit.

Martin caught most of his fish this week targeting brush piles in 30 to 40 feet of water. Martin fished the south end of the lake, rotating through roughly a dozen spots located mainly from the Brown’s Bridge down to the Lake Lanier Islands Bridge.

Early in the week, Martin caught several of his fish schooling with a River2Sea Rover. As the tournament progressed, he basically rotated between a Sworming Hornet Dude (with a 4-inch swimbait), a Fish Head Spin and a drop-shot with a Bruiser Baits finesse worm.

For a total weight of 51 pounds, 12 ounces, Martin earned $60,000 for fourth. That’s quite the achievement considering he caught only one keeper in two days of fishing the last time the Cup was held on Lanier.

“I’m starting to figure out how to catch these fish deep; I’m learning some new tricks. Two years ago I fished too shallow.”

Despite the pretournament discussion that spotted bass were the dominant species, Martin was the highest-fishing pro to exclusively target spots.

“I’m proud to have had the chance to defend my title.” 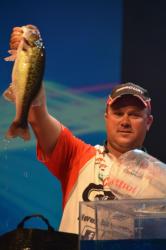 Perhaps the biggest threat to unseat Wheeler wasn’t Canterbury or Thrift, but instead was the 2012 Angler of the Year David Dudley. The Castrol pro committed to targeting cruising wolfpack bass during prepractice and never wavered during the tournament.

While he was around the right fish, execution was a problem. Ironically, Dudley is notorious for poking fun at his fellow pros about their missed fish. Now that the shoe was on the other foot, he hardly wanted to talk about it. On day three the frustration mounted to such a degree that Dudley was seen snapping rods over his knee.

“I hate excuses, but I had the fish on to win,” said Dudley. “I really want this tournament out of my mind right now. I really want to forget all about this as soon as I can.”

While Thrift frequently saw his cruisers, Dudley rarely did. He used similar baits however – bream-colored prop baits, a wacky worm and a 6-inch Bottom Hopper worm on a shaky head.

Dudley fished several marinas and the presence of both cruising and spawning bluegills was crucial to his success. His final-day stringer weighed 14 pounds, 6 ounces, bringing his total weight to 49-13. Dudley earned $50,000.

Rounding out the top 10 pros at the 2012 Forrest Wood Cup on Lake Lanier: