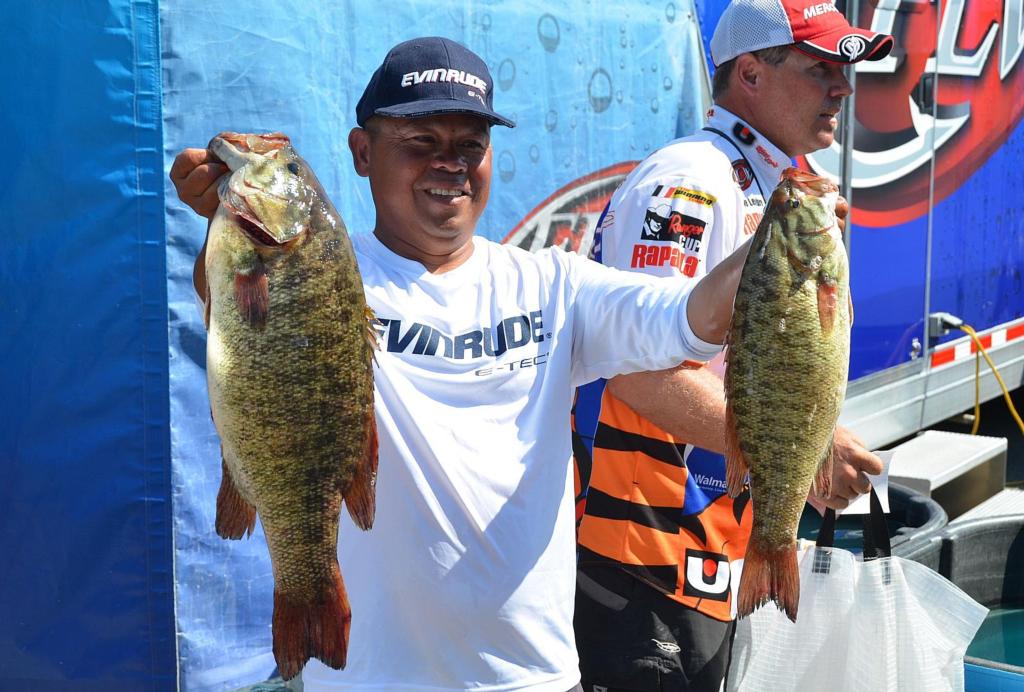 TRENTON, Mich. – As expected, over two thirds of the field at the Walmart FLW Tour Open pointed their boats north Thursday morning towards Lake St. Clair and the St. Clair River. But the few that ventured south to Lake Erie found exactly what they were looking for – giant smallmouths in the 6-pound class. In fact, each of the top three pros opted for Erie instead of St. Clair.

While the bites on Erie weren’t as numerous, the average size was impressive. Leading the pack is veteran pro Thanh Le, who caught the biggest smallmouth of his life today. His 6-11 brute was also the heaviest bass of the day and it anchored his 22-pound, 14-ounce limit.

Le went to his first spot, which was his best spot in practice, and was disappointed to only find catfish and drum. His fortune changed at spot No. 2 as the 6-11 bit. He moved again, caught two or three more and steadily climbed until he had a limit in the Ranger at 11:30 a.m.

“I went to Erie because I hate smallmouth fishing in grass; I prefer targeting rocks and structure,” said Le. “On Erie, they’re either there or they’re not.”

Le said he visited seven places and essentially hit all the productive water he has. Most of these areas offer structure in water 20 to 30 feet deep.

“I’m fishing tubes and drop-shots, barely dragging it along the bottom. I am not getting a lot of bites, but the ones I’m getting are big.”

Despite Erie’s sheer size and the fact that most of the field went north, Le still had some company. He dialed into his pattern on the last day of practice when he caught a 25-pound stringer. Today, Le said he caught 10 bass total.

“That’s what I was hoping for today – 25 pounds. If they would have bit at my first spot I think I would have had it.” 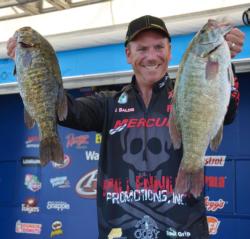 Few people know Lake Erie better than Michigan pro Joe Balog. While Balog now lives on St. Clair, he still heads south and east come tournament time – especially if the winds are calm. After an hour and 15 minute boat ride and nine different spots, his plan worked to the tune of a 22-pound, 13-ounce limit.

“With the weather we had today Erie was a natural choice,” said Balog.

Like Le, Balog did not sort through numbers of fish – only receiving eight bass bites all day. The biggest of those was a fat 6-3.

“I caught my first keeper at 9, my second at 10 and then at 11 I caught three in a row and the momentum really turned. I was even able to check on some stuff that I wasn’t able to get to in practice.”

Balog said he’s deep structure fishing in as shallow as 25 feet of water and as deep as 36 feet.

“Today the key was a 5-inch Trigger X minnow. But I’ve also caught some on my signature 1-ounce Goby Replica. That bait is known as more of a spring and fall bait, but its working some in this tournament too.” 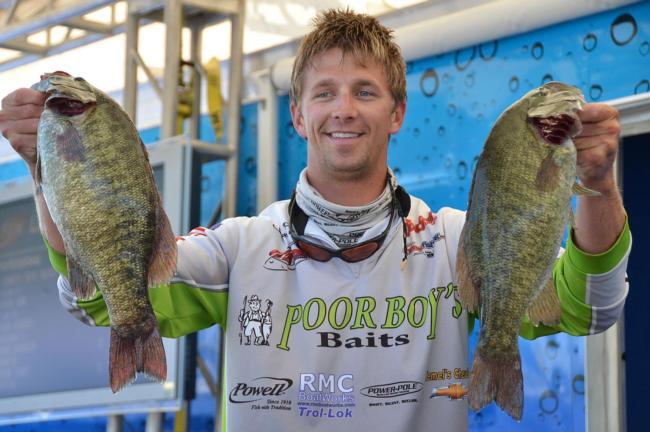 It’s been quite a run recently for third-place pro Chad Pipkens. After winning the Beaver Lake Major from the back of the boat, Pipkens stepped up and won the points race in the BASS Northern Opens. In his first FLW Tour event from the front deck, Pipkens caught a 21-pound, 11-ounce stringer – on his 29th birthday no less.

“I don’t even view St. Clair as a choice,” said Pipkens, who lives approximately an hour and 45 minutes from Trenton in Holt, Mich. “I like to hop around and the St. Clair fish tend to scatter.”

Pipkens caught 15 or 20 keepers from 12 different places. While he drop-shotted a Poor Boys Erie Darter in 18 to 25 feet of water, he also cranked in water as shallow as 8 or 9 feet.

“In my opinion, Erie has been waiting to bust loose. It’s close, but it might be starting to happen.”

Pipkens is especially optimistic after catching a few on places that were void of fish during practice.

“They’re still not setting up quite right. You’ll see some groups but there’s a lot of solitary fish and that means you have to bounce around a lot. Today you could do that but it becomes a lot more difficult when the wind blows.” 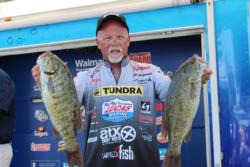 The highest-finishing pro who sampled Lake St. Clair Thursday was Bill McDonald of Greenwood, Ind., who sacked 21-9. McDonald said this is his second tournament out of Detroit and he’s never even seen Erie by boat.

“I fished St. Clair today and all during practice,” said the fourth-place pro. “I came up here and had a good prepractice, then I struggled some Sunday and then on Monday and Tuesday I caught them good again.”

McDonald didn’t see the need to deviate from what was working so he continued to throw a drop-shot around rocks and clumps of vegetation.

“I probably hit eight or 10 places today and caught 12 to 15 keepers. I’m mainly using drop baits in 14 to 20 feet of water. I was so confident that I started this morning with just one rod on the deck.” 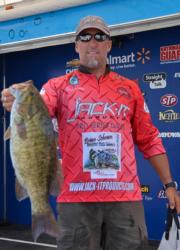 “I fished a 12-foot flat early with a Jerk Money 120 by Jack-It products,” said Metry. “I was twitching it hard and fast as they are aggressive this time of year. By 11 a.m. the bite slowed so I moved and started dragging a Lunch Money tube in 25 feet of water. That’s when I caught that big one.

“I thought it was a sheepshead at first because it stayed down and would never surface. Then I finally saw the gold and bronze color and said `Oh my God it’s a smallmouth.'”

Shuffield experienced the day of a lifetime meanwhile on St. Clair.

“I found this three square-mile area in like 15 feet of water where I could see them swimming around everywhere,” he explained. “Today I just fished the outside edge of it and caught 15 keepers and then I was done. I got there at like 8:30 this morning and I was done at 9:50. It was amazing. I would bring up a 4-pounder and there would be two or three more just following it in. I bet I threw back 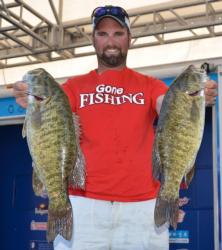 Shuffield said he only made 50 casts in that area and roughly 30 of them came back with a smallmouth pinned to his tube. His co-angler partner, Keith Honeycutt, caught nearly 20 pounds as well.

“We didn’t know what to do so we left and just threw a frog for fun the rest of the day for largemouths. This is my fourth time up here and I just love it.”

Within that three-mile area Shuffield has 75 waypoints, many of which contain eelgrass. The best part of his pattern is that no one was within 10 miles of him all day.

“I really think the quality is there to win. If you get the right bites you could catch 25 or 26 pounds.”

Rounding out the top 10 pros after day one:

“It was a slower bite early,” said Taylor. “But once the sun got up you could kind of see where to throw. And then it was on.”

Taylor said he culled five times, using mainly drop-shots and a Poor Boys Erie Darter. He occasionally mixed in a spinnerbait and a jerkbait.

“We were basically targeting breaklines with some cabbage.”

Marty Hottot of Chatham, Ontario, is in second place, 10 ounces off the pace with five bass weighing 20 pounds, 15 ounces. Hottot and Taylor were the only co-anglers to crack the 20-pound benchmark. 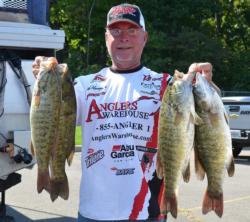 Paired with Shuffield, Honeycutt caught a 19-pound, 10-ounce stringer in just over an hour on Lake St. Clair. Shuffield credited the veteran Texas co-angler for being excellent with the net in the midst of an all-out flurry.