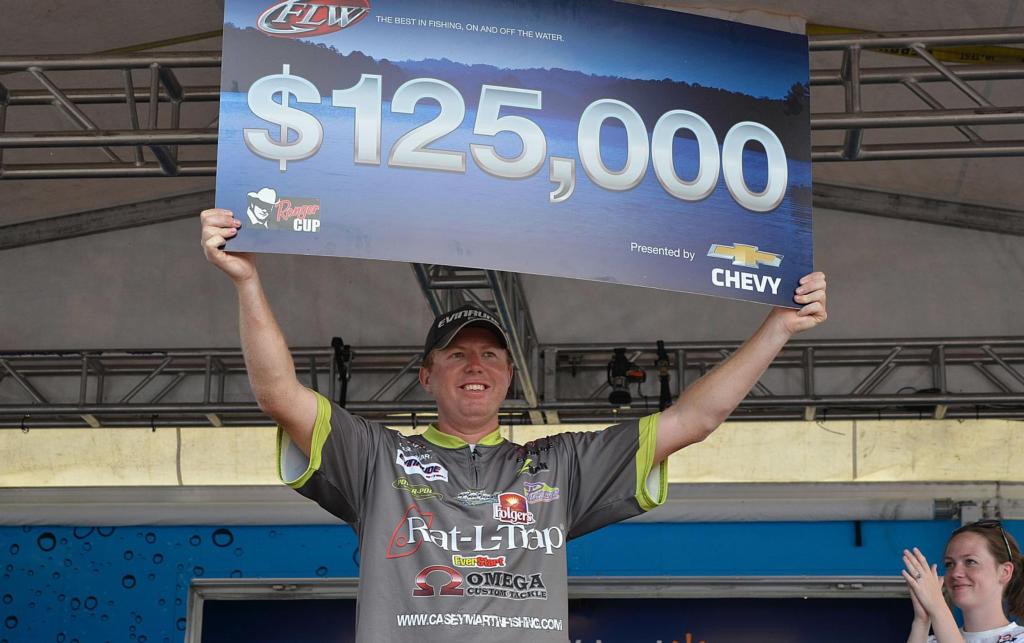 DAYTON, Tenn. – Casey Martin led the opening day of the 2013 Walmart FLW Tour season with a 26-pound, 12-ounce Lake Okeechobee stringer. Fittingly, he closed the regular season by winning with a 30-pound final-day stringer. Between bookends was a rollercoaster ride of ups and downs. The ride ended Sunday at Lake Chickamauga with one of the most dominating victories in FLW Tour history.

When Martin arrived in Dayton, he was solely focused on trying to qualify for the Forrest Wood Cup. The odds were against him as the New Market, Ala., pro entered the tournament 54th in the standings. That meant Martin would have to make the top-10 and receive some help from others above him.

After a poor start to practice, Martin pondered locking up and sampling Watts Bar on day three. He opted against it and instead located three schools of bass, one of which was loaded and completely lit up his Lowrance unit with white dots (which indicate fish). The spot was a shell-ridden ledge with 15 feet of water on top and 25 feet on the bottom. But as boat No. 76, Martin was beaten to the spot the first morning by Mark Rose. With Rose’s permission, Martin fished alongside as the two whacked giant stringers. Two other anglers joined, but only Martin made the top-20 cutoff. That third day was the pivotal one. 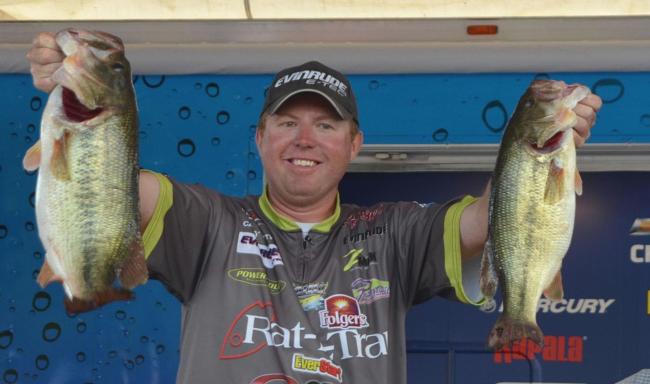 “I thought the mega-school was gone and I almost left,” recalled Martin. “Then I idled around one more time to see if they were still on the graph and they were. So I adjusted and switched to a spinning rod and a drop-shot.”

Not only did Martin re-ignite the school, he was able to lay off his big-fish spot, a long point that separated two spawning bays, and have something in his back pocket for the final day. In the weeks leading up to the event, the Canadian-born pro practiced relentlessly on Lake Guntersville near his house. The two TVA lakes fish similarly and Martin was prepared for the day-three curveball.

“Not only did I look for the same stuff, but I checked on how the schools reacted to different baits on consecutive days. I knew about the drop-shot coming in because my girlfriend Lindsey would throw one out of the back of the boat.”

Martin’s patience with the big-fish spot paid dividends Sunday as he was fishless on the mega-school an hour into the day.

“Both spots were within sight of each other in Harrison Bay. I’d go to the mega-school and get a solid limit, and then sneak into the big-fish area when no one was looking. I was struggling on the mega-school today and I saw a local start to go over to the big-fish spot. I was thinking about leaving anyway, but that really forced my hand.” 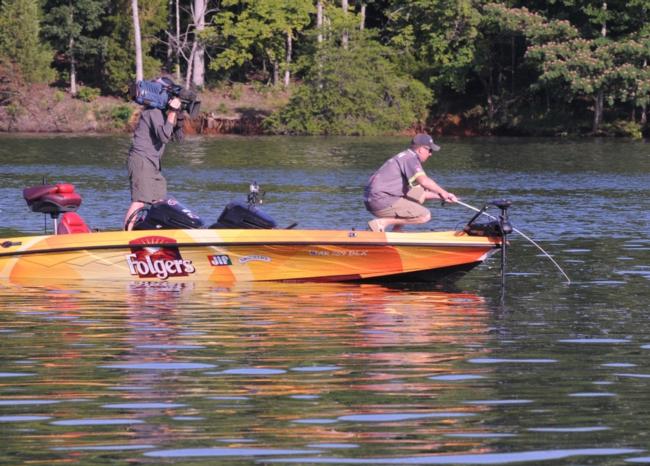 On his third cast he tied into twin 5-pounders, but one came off at the boat. From there, the crush session was on. An 8-pound, 5-ounce giant, his biggest fish of the week, bit just before 9 a.m. and he had his limit around 11. The final tally of 30 pounds, 1 ounce is astonishing, even for Chickamauga, but especially for late June.

Martin’s four-day total weight of 103 pounds, 3 ounces, is second all time in FLW Tour history as is his 22-pound plus margin of victory. The only thing he didn’t do was give the sizeable and raucous Dayton crowd a hometown winner.

“It’s been a crazy year. I didn’t even think I would make the Cup. It went from an average year to an unbelievable year pretty quick.”

Martin caught most of his fish this week on a Picasso Bait Ball Extreme tipped with either Gene Larew Sweet Swimmers or Zoom Swimmin Super Fluke Juniors (albino color) on top and either 6-inch Strike King Shadalicious (blue gizzard color) or Basstrix swimbaits on bottom. While Martin had 13 swimbaits connected to his rig, only the bigger three on bottom had hooks, per Tennessee rules. 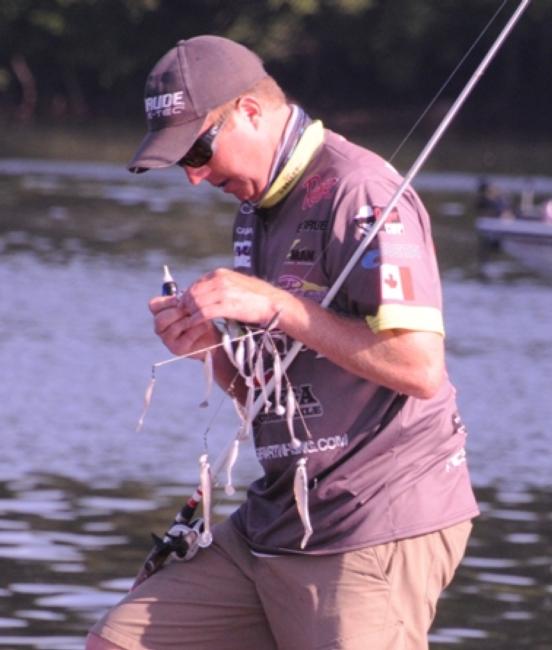 “People can say it’s just another Alabama rig win but those fish wouldn’t touch it on day three. But today it caught all my fish. Twelve of the 20 bass I weighed this week came on it.”

Martin has been featured all year in a Youtube reality series titled “Circuit Breaker.” The Grand Lake episode will be out shortly and fans won’t want to miss the Chickamauga finale.

“Never in my wildest dreams did I think I’d win one in my rookie year. I know how good these guys are.”

“Coming into this event, I didn’t even know if I’d be back next year. I wanted to, but it’s expensive. So this is huge; I’ll definitely be back.”

He’ll also be one of the 35 pros from the FLW Tour at the upcoming Forrest Wood Cup on the Red River.

He had the area to himself and there were plenty of fish, but the quality in the river wasn’t quite as 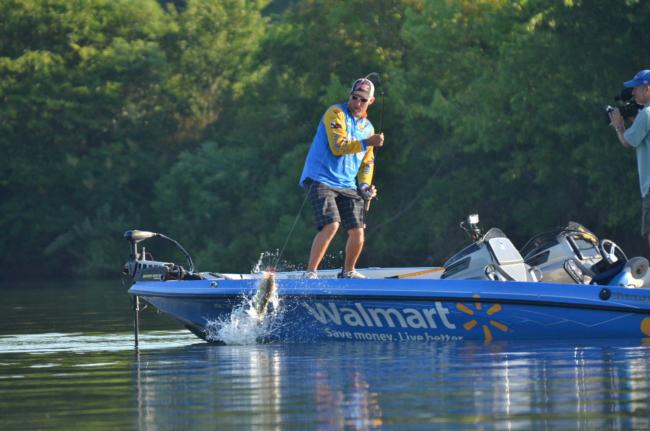 good as the quality in the lake.

“Twenty pounds is about all you can do in river,” said Strader. “You can make the cuts, make it to the last day, but you really can’t compete with the lower end.”

Strader shortchanged himself a little as he caught a 22-pound, 4-ounce stringer on the final day.

“I didn’t have any in the first 40 minutes, then I caught four in a row and it was on. I tried to upgrade again in the lake but couldn’t. I did see a giant shallow but she just swam off.”

“It was a real specific deal. But once you got lined up right, it was fun. I found that spot years ago and it only produces for a few weeks each year.”

“My only regret is that I should have stayed on that spot longer on day one. At least I didn’t lose by ounces. That would have been way more painful.” 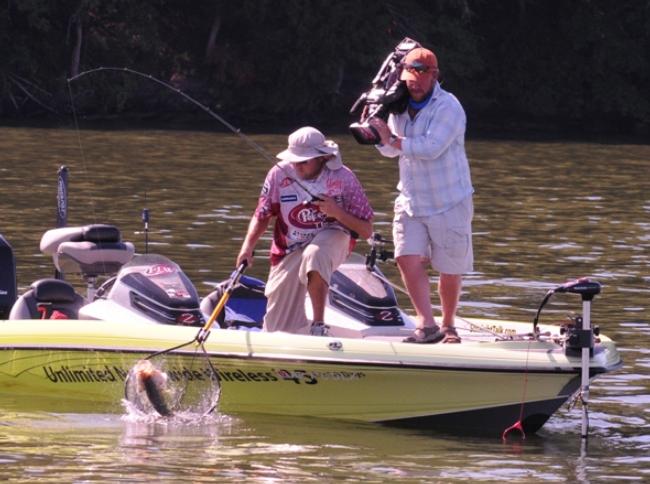 Like Strader, Neal got off to a slower start on day one and then came on strong towards the weekend. On day four, he fell back a bit – catching 17 pounds, 1 ounce to finish the tournament with 79 pounds, 13 ounces.

“I really thought 78 to 80 pounds would win it,” said Neal, the owner of the Dayton Boat Dock. “I got myself there, but as it turned out it took a lot more.”

Neal switched back and forth between targeting schools of fish or specific pieces of cover like a brush pile or stump. The first day of the tournament he fished mostly cover and in hindsight thinks it was a mistake. On days two and three he whacked them early in the morning near an underwater spring. Today the fish weren’t there, but he has to assume they were on day one. While it was just one of several mid-lake spots, it accounted for much of his weight on days two and three.

“I would love to have day one all over again. But anytime you average 20 pounds a day you can’t complain. It was an awesome week; it was all I can ask for.”

Neal caught most of his fish on a 3/4-ounce Warrior football jig with a Warrior craw and a homemade 1-ounce bucktail jig. He also caught a few ripping a spoon and a few casting a solo Strike King Shadalicious swimbait.

For third place, Neal earned $28,520. And like Martin, Neal will be in Shreveport this August for his first Forrest Wood Cup. 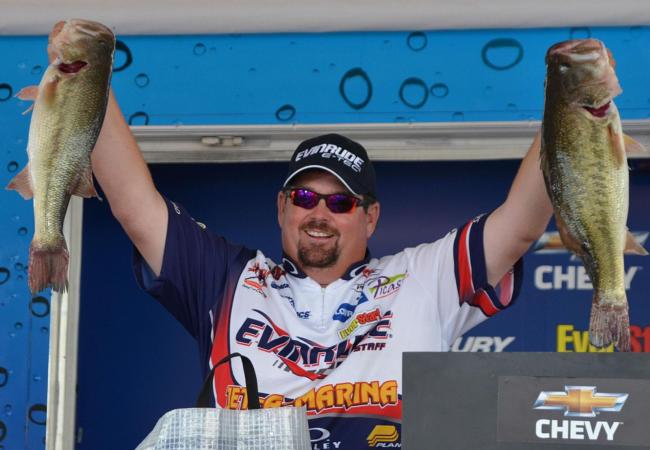 With his Forrest Wood Cup berth in the balance, Dan Morehead decided to stay away from his favorite Tennessee River ledges in favor of less risky grass. The strategy worked as Morehead finished fourth with a total weight of 77 pounds, 2 ounces.

“I wanted it to be in my own hands this week,” said the Paducah, Ky., pro. “I couldn’t get bit on any subtle offshore stuff and I didn’t want to get caught behind a bunch of people on the community schools. I wanted to control my own destiny.”

Morehead instead fished approximately 6 feet of water near Chester Frost Park. His first bite this morning was a 9-pounder, the biggest bass of the tournament, and his second bite was a 5-pounder. From there, the action came back to earth as he weighed in a 23-pound, 2-ounce stringer.

“I literally fished this whole tournament with two rods on the deck. I fished a Zoom Magnum Trick Worm (red bug color) with a 3/16-ounce Picasso tungsten weight and 1/8-ounce Picasso Shakedown with a Zoom Trick Worm.”

Morehead remarked earlier in the week that subtly placing his baits between the grass was key. His bites weren’t violent; he’d simply see his line ease off to one side or the other.

The Evinrude pro earned $23,753 and qualified for his 13th Forrest Wood Cup. 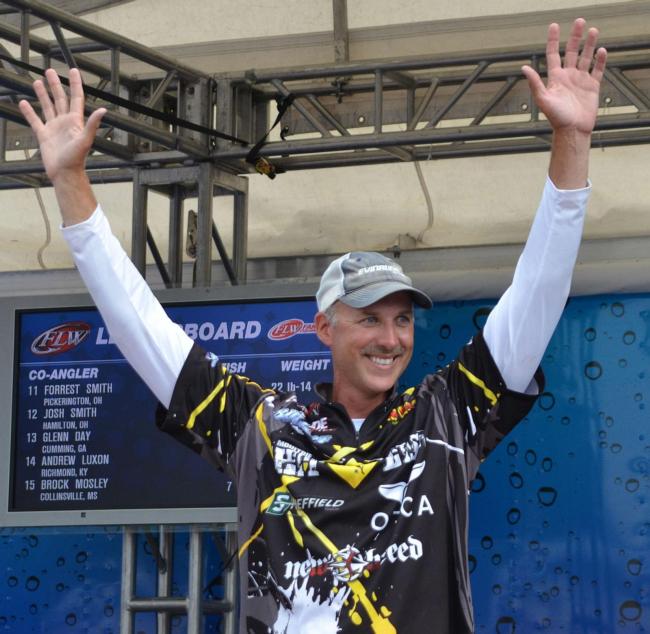 After capturing the Angler of the Year title Friday, Morgan went to work on the tournament title the final two days. With less pressure, he sacked 19-5 and 19-8 stringers to finish the week with a cumulative weight of 73 pounds, 8 ounces.

“I caught 95 percent of my fish this week on a Zoom Ol’ Monster,” said the hometown hero. “I did catch a few on a War Eagle jig and a few on a Zoom Trick Worm.”

While Strader and Neal fished larger schools, Morgan bounced around and hit 50 to 60 spots a day – targeting cuts in bars, stumps and brush piles. He mainly stayed away from the community holes.

“I took it slow, one cast at a time, one hour at a time, one day at a time. I couldn’t have scripted the week any better, other than winning the tournament. How sweet it is to win AOY right here in the hills and hollers of Dayton.”

Rounding out the top 10 pros at the FLW Tour event on Lake Chickamauga:

The final event of the season is the Forrest Wood Cup, slated for Aug. 15-18 on the Red River in Shreveport, La.