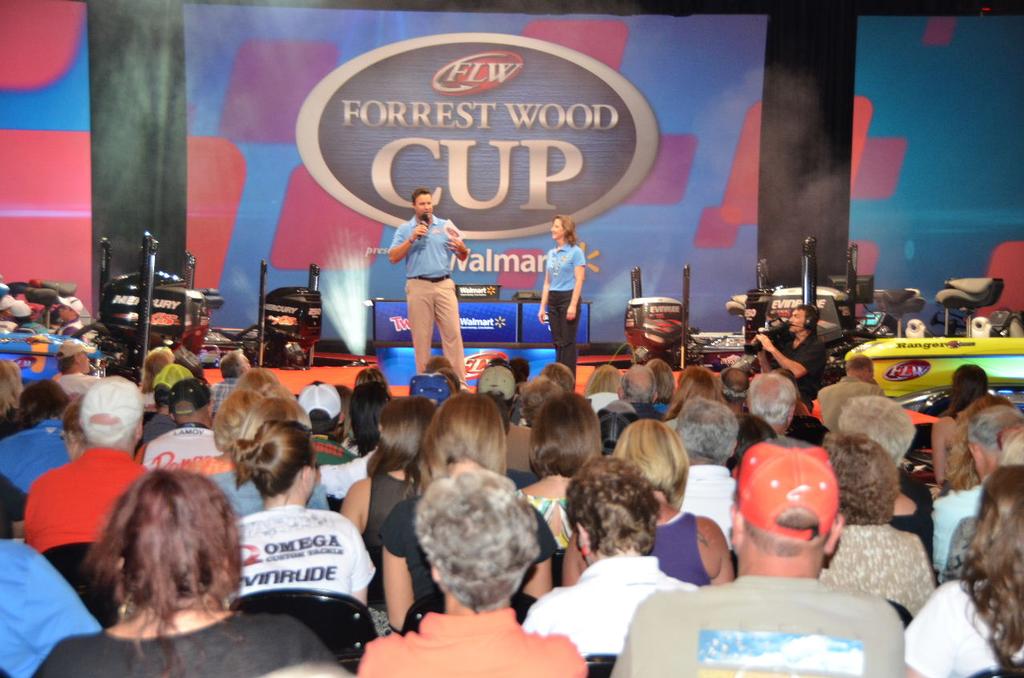 Another great crowd was on hand to witness weigh-in at the 2013 Forrest Wood Cup. Photo by Gary Mortenson.
The plot thickens, Super Glue to the rescue and a 2-year-old makes the cut
August 16, 2013 • Gary Mortenson • Tackle Warehouse Pro Circuit 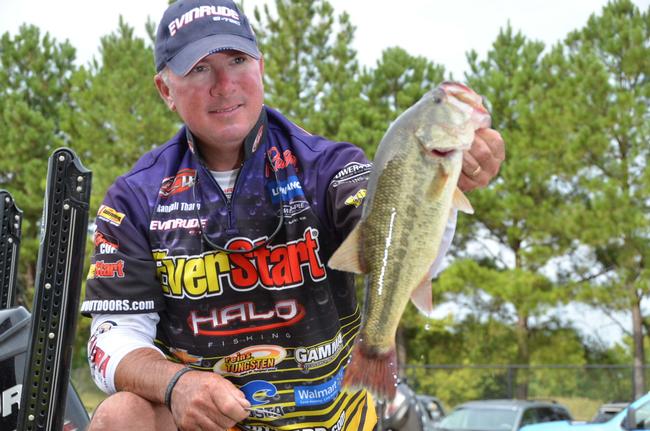 The plot thickens … Heading into the opening day of competition at the 2013 Forrest Wood Cup, the conventional wisdom was that it would be a grinder tournament – meaning that nobody would likely pull away in the early rounds. The rationale was that big bites were so difficult to come by that an 11- or 12-pound average per day would more than likely result in a tournament title. But then two anglers – Randall Tharp and Bryan Thrift – defied all expectations as they both netted monster stringers well in excess of 18 pounds. By the start of day two, the new conventional wisdom was that the 2013 Forrest Wood Cup was now simply a two-man duel between Tharp and Thrift. While that narrative made perfect sense at the time, multiple-day, high-stakes bass-fishing tournaments sometimes have a tendency to veer off from a carefully written script. And that’s exactly what transpired on Friday. With Tharp only managing a catch of 11 pounds, 3 ounces, and Thrift turning in an 11-pound sack on day two, both anglers suddenly opened the door to the rest of the competition. And when you do that, against a field of this caliber, you’re asking for trouble. Sure enough, for Tharp and Thrift, that trouble materialized in the form of Larry Nixon, Ray Scheide, Mark Rose, Tom Monsoor and John Cox. Whereas a day before, Thrift and Tharp enjoyed more than a 5-pound lead over their next nearest competitor. But now, suddenly, that lead had evaporated into a 2-pound lead over Nixon. To make matters more exciting for bass-fishing fans, five anglers are now basically 5 pounds or less behind the two leaders. In short, hold onto your seats, because who knows what day three will bring. 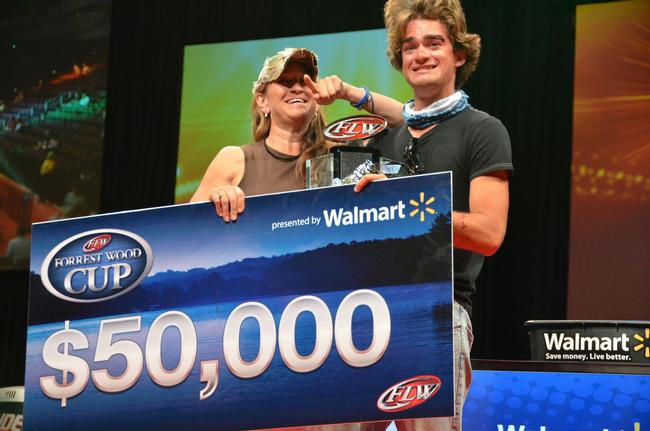 Great hair, great win … While there were many memorable moments from today’s Cup weigh-in, Theo Corcoran’s emotional victory celebration immediately after capturing the first Forrest Wood Cup co-angler title of his career probably stands out the most. As Corcoran walked onstage holding up a giant bass while holding back equally giant tears, the 24-year-old Missouri native did his best to soak in the moment as he was declared champion by a rather stunning 7-pound, 9-ounce margin. Sporting one of the greatest hairdos since Jimmy Houston, Corcoran let the world know just how he felt. “It’s surreal,” he said as he repeatedly wiped tears of joy away. “I’ve been dreaming about this since I was 5 years old watching Jimmy Houston.” However, suddenly the mood changed as tournament host Jason Harper and the crowd noticed something amiss – Corcoran was bleeding from the head. As it turned out, it was from a wound he’d sustained earlier in the day while fishing with pro partner, 2013 TBF National Champion Mark Daniels Jr. According to Corcoran, immediately after boating a 4-pound largemouth which all but sealed his victory earlier in the day, Daniels made a cast and clocked Corcoran in the head with a large weight, opening up a huge gash on his head. Understandably concerned, Daniels ran over to Corcoran to express his sympathies and help him bandage his wound. However, it was the 23-year-old old who now attempted to calm down Daniels in addition to presenting his own makeshift medical plan in the process. “I told (Daniels) just to hold on and Super Glue the cut. He said, `What?’ I said, `Yeah, let’s just Super Glue it.'” So that’s what they did. Amazingly enough it worked and Corcoran went on to victory. But there was one catch – apparently Super Glue doesn’t hold as well during trophy presentations. However, looking at the smile on Corcoran’s face as blood ran down the side of his head, it appeared that it didn’t much matter. Because if truth be told, blood isn’t thicker than a first-place check worth a cool $50,000. 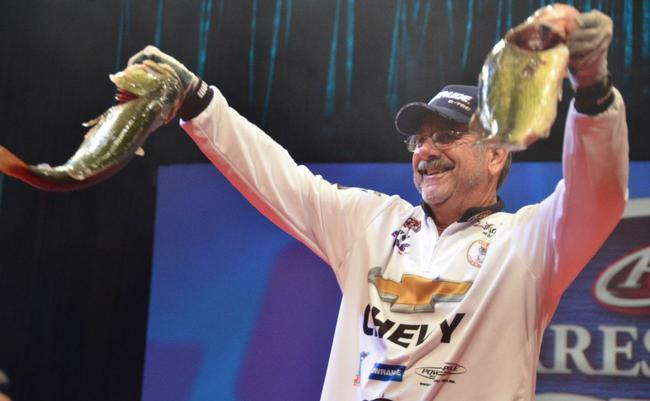 The General surges … While Thrift and Tharp have dominated the pro headlines to this point, and rightfully so, there appears to be a new sheriff in town – who goes by the name of Larry Nixon. While Nixon has often joked that it’s becoming harder and harder to keep up with the “kids” on the professional bass fishing circuit these days, today it was the “The General” who showed the kids a lesson or two. Boating a 14-pound, 5-ounce sack in today’s competition, the largest stringer caught on day two by any angler, Nixon moved to within 2 pounds and 2 ounces of Tharp and within 1 pound, 14 ounces of Thrift. What should make matters more concerning for the dynamic duo atop the standings is the fact that Nixon hauled in a 13-pound, 4-ounce stringer the day before. In short, Nixon’s rise is no fluke. In fact, right now, he’s arguably been the most consistent angler in the tournament so far. “I’ll tell you, I’m fishing my tail off,” said Nixon, who has never won a Forrest Wood Cup title. “I’m fishing in an area with big fish. It’s a lot of hard work but I’m staying with it and (I have) confidence.” To be sure, Nixon would like nothing more on this planet than to grind out a title here on the Red River. And now, it looks like it just might be a real possibility. So kids, watch out. 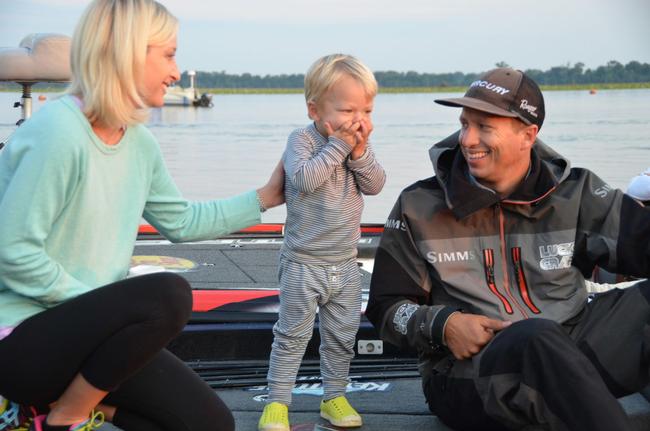 A 2-year-old makes the cut … While awaiting the start of today’s takeoff, Keystone Light pro Brent Ehrler invited his wife and 2-year-old son Oliver on board his boat for a quick bit of family bonding. But like most 2 year olds, not surprisingly, Oliver wasn’t just content to sit around and be a passive participant in the morning festivities. As such, he began playing with a bag of Yamamoto plastic baits – throwing them up in the air, throwing them at his parents and throwing them into the water to the delight of the crowd. But when the time came for Ehrler to pull away from the dock, Oliver decided that the game wasn’t quite over, hucking one last bait in the direction of his dad which ultimately landed harmlessly on the boat deck. At the time, Ehrler thought nothing of it – that was until he had exhausted his tackle arsenal late in the day. “I had burned through all of my stuff and I knew I need one more fish,” Ehrler recounted. “And then I looked at my feet and there it was.” Somehow necessity and fate collided to produce one of the more memorable top-20 finishes in Cup history. Ehrler tied on the bait and proceeded to land a significant fish which helped propel him into today’s cut. “I really didn’t think I had a chance to make it today,” said Ehrler, who couldn’t help but grin from ear to ear as he thought of how the day’s events unfolded. 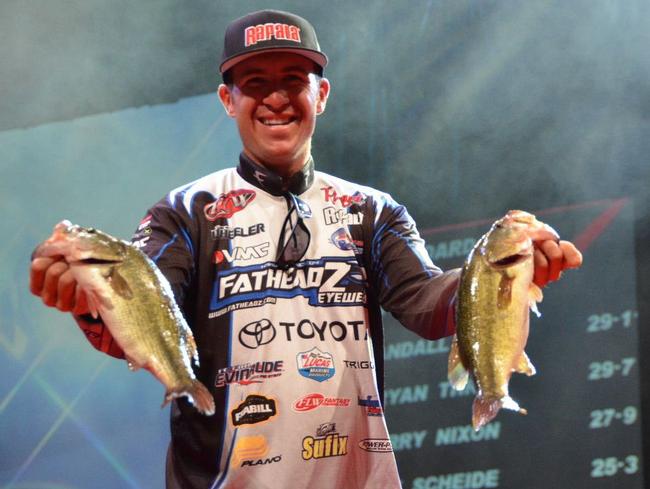 4: Number of ounces separating first and second place after the first day of Cup competition.

15: Most Forrest Wood Cup appearances by an angler (Andy Morgan) still remaining in this year’s competition.

20: Total number of pros who still have a chance at capturing the 2013 Forrest Wood Cup title.

22: Age in years of the youngest angler (Jacob Wheeler) remaining in this year’s Cup competition.

26: Total number of limits caught by co-anglers during the opening day of Cup competition.

287: Total weight in pounds of fish caught on day one by entire co-angler field.

435: Total weight in pounds of fish caught on day two by pro field.

“I’m 44 years old so I know it’s not going to get any easier for me.” – Day-two pro leader Randall Tharp on why he wants to win the Forrest Wood Cup as badly as ever.

“It was pretty awesome. All in all I had a great time running with the big dogs.” – Paul Clark, the 2013 FLW College Fishing National Champion on fishing his first major event against the top pros in the country.

“My dad died last Thursday so it’s been a tough week for me. I want to thank everyone for their thoughts and prayers.” – Pro competitor Bill McDonald on having other things on his mind this week more important than the Cup.

“He lost a bet. If he didn’t catch a limit today he was going to have to film me.” – Travis Wavescorx, the producer of “Circuit Breaker,” the reality video series covering the exploits of rookie Tour pro Casey Martin. Wavescorx actually came out onstage in place of Martin while Martin filmed Wavescorx weighing in his bag of fish.

“It was tougher today. This is the tenth day I’ve fished here this summer and I’ve caught like on 4-pounder.” – Chevy pro Jay Yelas on the difficult fishing conditions that led to his 25th-place finish.

“I’ve fished about 15 or 16 Bassmaster Classics but I have to tell you, FLW has some of the best people in the world – except for you.” – Chevy pro Jimmy Houston joking with FLW tournament host Chris Jones onstage.

“When you’re fishing out of the back of the boat with Jimmy Houston, how can you have a bad day?” – Co-angler Dave Shively, putting his 33rd-place finish in perspective. 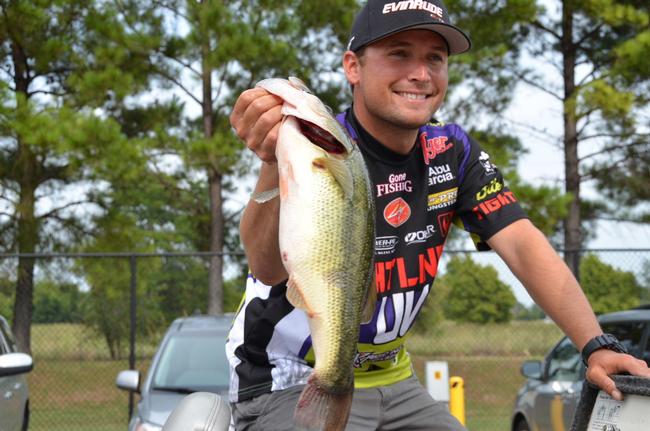 “I’m fired up dude. I just want to beat (Randall) Tharp now. He’s been talking trash all year. I’m coming for you Tharp.” – Justin Lucas on his excitement after jumping from 20th place on day one to 10th place on day two.

“My popularity has gone sky high since I got that rig.” – M&Ms pro Jim Moynagh on the side benefits of having a fully wrapped truck and boat covered with M&Ms logos.