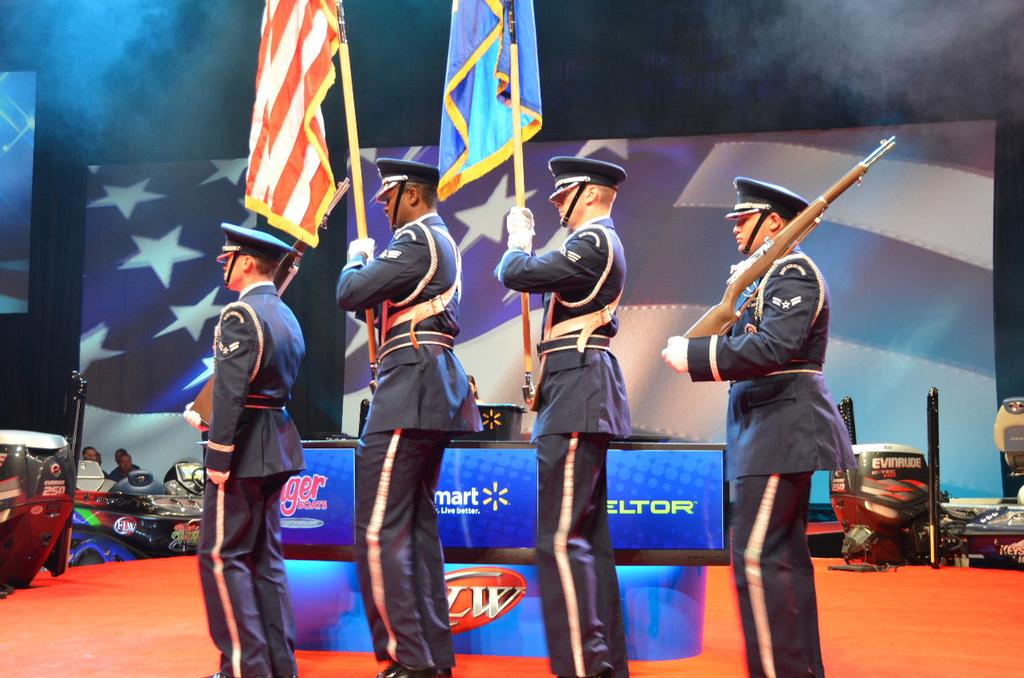 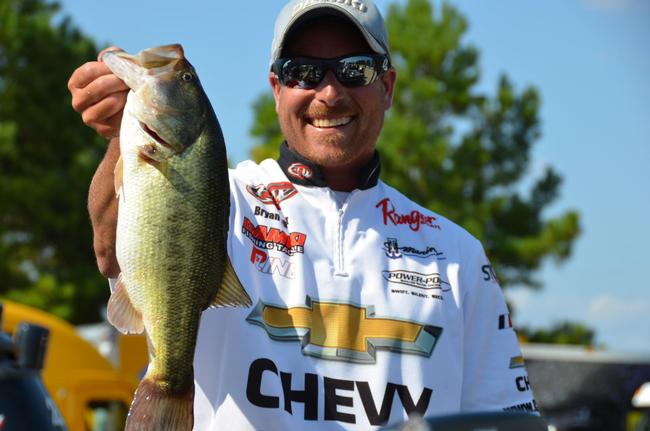 A change at the top … For two straight days, EverStart team pro Randall Tharp of Port Saint Joe, Fla., had led the 2013 Forrest Wood Cup. Well today that all changed … just barely. Bolstered by a three-day catch of 39 pounds, 6 ounces, including a 9-pound, 15-ounce bag in Saturday’s competition, Chevy pro Bryan Thrift, who had tailed Tharp all week long, finally grabbed the top spot heading into Sunday’s all-important, final round of Cup competition. “It’s really tight,” said Thrift of the current leaderboard. “I’d love a little more separation. It was a grind out there today.” Despite the tough day of fishing, Thrift did manage to catch a nice 3-plus-pounder fishing a 6-inch Damiki finesse worm, a catch which salvaged his afternoon and put him in strong contention for a title. But despite the thrill of leading one of bass fishing’s most prestigious events heading into the final day, Thrift is hardly going to have a restful sleep this evening as Tharp remains hot on his heels. Ironically, Thrift now holds a 4-ounce lead over Tharp, who in turn held a 4-ounce lead over Thrift after yesterday’s competition. So in essence, the two heavyweights just flip flopped in the standings. However, given the rise of a few other anglers in the top-10 field, tomorrow’s outcome is anything but certain. “There are some great fishermen in the top 10, so anyone can win,” said Tharp. “There’s a lot of big fish out there and whoever goes out there tomorrow and catches that big bag is going to win. I think I know what it takes to win this tournament, but we’ll have to see what happens tomorrow.” 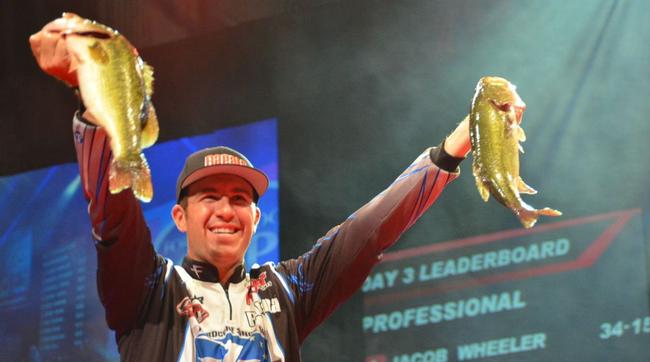 Wheeler surges … After the first day of Cup competition on Thursday, Jacob Wheeler of Indianapolis, Ind., the reigning 2012 Forrest Wood Cup champion, looked like he could kiss any chances of a repeat goodbye. Languishing in 40th place, it appeared that the 22-year-old would have to settle for some nice memories in Shreveport and not a whole heck of a lot more than that. However, by the time Saturday’s weigh-in had concluded, it was clear that anyone who counted out Wheeler earlier was now looking very foolish indeed. Buoyed by a day-two catch of 13 pounds, 7 ounces, Wheeler shot up the leaderboard into 18th place, barely surviving Friday’s top-20 cut. Then today, the Indiana native turned on the afterburners, boating the best tournament catch of the day with 14 pounds, 4 ounces. Suddenly, Wheeler was sitting in fourth place overall heading into the finals with a very real chance of pulling off one of the greatest comebacks in Cup history. “It’s a four-quarter event,” said Wheeler, who heads into the finals with a total catch of 34 pounds, 15 ounces. “I went out there today and made some really good decisions. And if I can get some good bites tomorrow, I can make a real run at this thing.” In short, don’t count the kid out just yet. 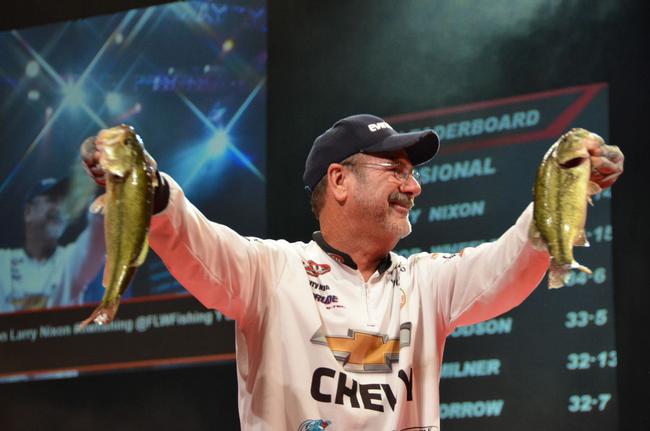 The Red River fights back … Although many had predicted that the Red River would be a difficult place to fish in the dog days of summer, a number of notable anglers managed to bring in some significant limits over the first two days of competition. Thrift and Tharp boated 18-pound-plus sacks on day one, a feat previously perceived as nearly impossible. There were also seven bags total brought in that day that weighed in at more than 12 1/2 pounds. Then on day two, pros brought in nine sacks weighing over 12 pounds. However, today, the Red River was as stingy as it’s been all week – producing just two limits over 11 pounds. The two leaders who have dominated the competition all week, Thrift and Tharp, combined for just a little over 19 pounds. Seven of the top-20 pros failed to break the 8-pound barrier. And a handful couldn’t even top 7 pounds. As a result, only six of the top-10 pros from the previous day found themselves still in the top 10 when all was said and done: Thrift, Tharp, Larry Nixon, Mark Rose, Tom Monsoor and Robbie Dodson. Ray Scheide, John Cox, Mark Daniels, Jr., and Justin Lucas, who had all graced the top-10 leaderboard on Friday, unfortunately found themselves on the outside looking in. 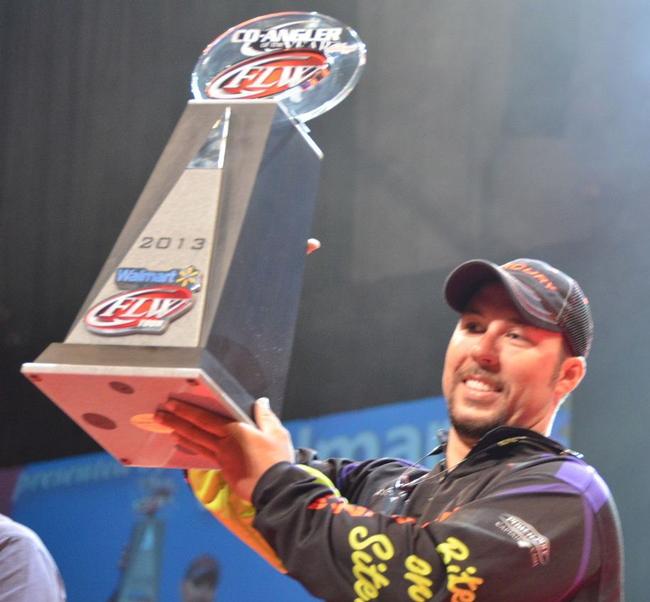 Peek seeks peak competition … While the changes atop the leaderboard heading into the final day of Cup action dominated the headlines, a little bit of other news was made today as well. Richard Peek of Centre, Ala., the 2013 FLW Tour Co-Angler of the Year, let the audience in a little bit of a secret today. When prodded by Forrest Wood Cup tournament host Jason Harper about his intentions for next year, Peek had this to say: “I guess next year is the year (to turn pro on the FLW Tour). I guess we can make it official. Winning the Co-angler of the Year is the nudge that I needed (to make my decision).” However, for any pros salivating at the prospects of having another rookie on Tour next year, they’d better take a quick refresher course before getting too excited. Since finishing in sixth place overall at the 2010 FLW College Fishing National Championship, Peek has recorded four top-10 finishes on the EverStart Series circuit, an amazing nine top-10 finishes on the FLW Tour and won two titles (a 2011 EverStart Series Pickwick Lake tourney and a 2011 FLW Tour Kentucky Lake event). 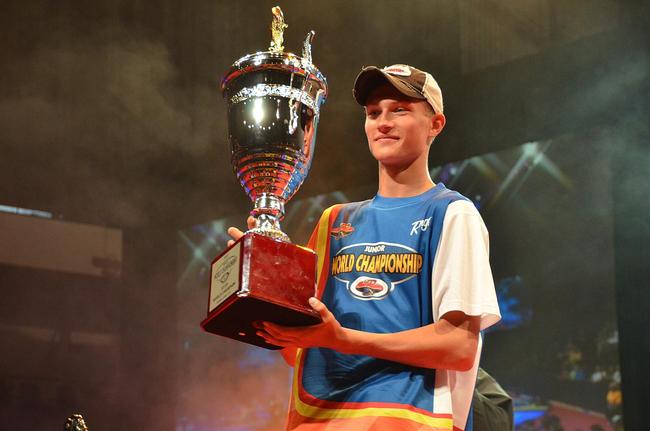 TBF kids recognized … Before the start of the day’s weigh-in, the 2013 TBF National Junior World Championship competitors from all across the nation were recognized onstage today. While all of the kids, who ranged in ages from 11 to 18 performed admirably this week, two juniors stood out. In the 11 to 14 age bracket, Luke Loewe, 14, of Wisconsin, captured the TBF Junior World Championship title. In the 15-18 age bracket, Jonathan Ladner of New Jersey took home the title.

1: Number of past Forrest Wood Cup champions with a chance to become the first angler to ever repeat as Cup competition: Jacob Wheeler (2012).

4: Number of ounces separating first and second place after the third day of Cup competition.

7-2: The total weight in pounds and ounces separating first-place and 10th place. 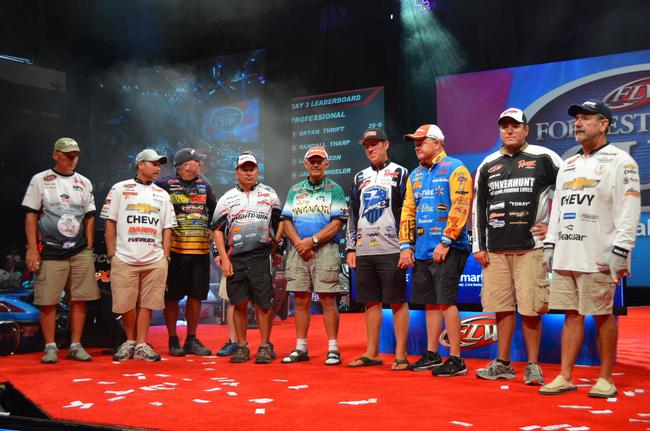 10: Total number of pros who still have a chance at capturing the 2013 Forrest Wood Cup title.

22: Age in years of the youngest angler (Jacob Wheeler) remaining in this year’s Cup competition. 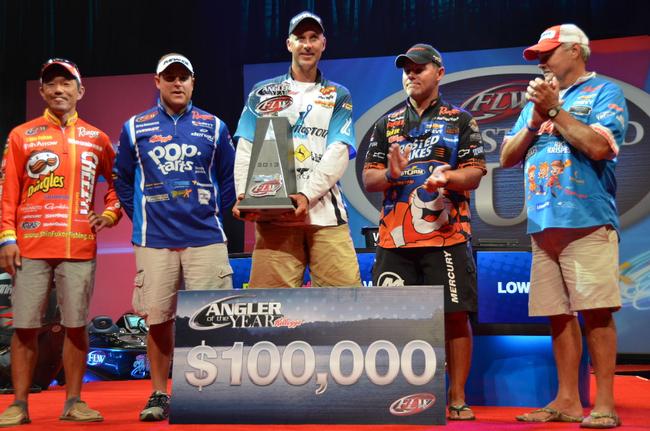 “I was going to make a long run today to (Pool 3) but I chickened out.” – Wesley Strader on what might have been after finishing the day in 14th place overall.

“I had a little difficulty on the water today. A live well switch got bumped and I wound up with four deceased fish. And I think it’s going to cost me.” – Troy Morrow, inaccurately predicting that he wouldn’t survive today’s cut as a result of the 1-pound penalty he incurred for bringing in four dead fish. But in the end, Morrow qualified in eighth place despite the mishap.

“I’ll tell you what, he’s really coming on strong. He’s got it going on.” – Fishing legend Hank Parker on the rise of Jacob Wheeler over the past two days of tournament action.

“That was a mistake.” – Justin Lucas coming clean on challenging Randall Tharp a day earlier. By the end of weigh-in on day three, Tharp made the cut in second place while Lucas finished his tournament in 15th place.

“Today was unbelievable. I can’t believe that I caught that many (small) fish all the same size. It blew my mind.” – Tom Monsoor.

“What a struggle today. You don’t know what it’s like to go out there with that much money on the line, go to your (main) spot and find out that it’s muddy and have to start all over again.” – Larry Nixon on his difficult day of fishing on the Red River.

“I want this more than anyone in the house, that’s for sure. I can’t fish like I used to, but I’m still pretty darn good.” – Larry Nixon on his desire to be 2013 Forrest Wood Cup champion. 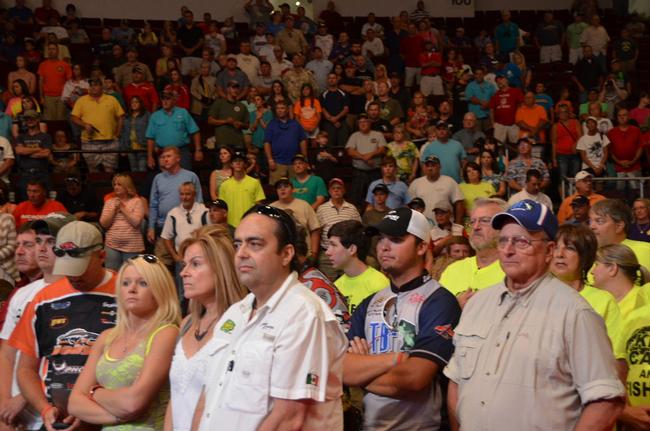