Dehart by an ounce 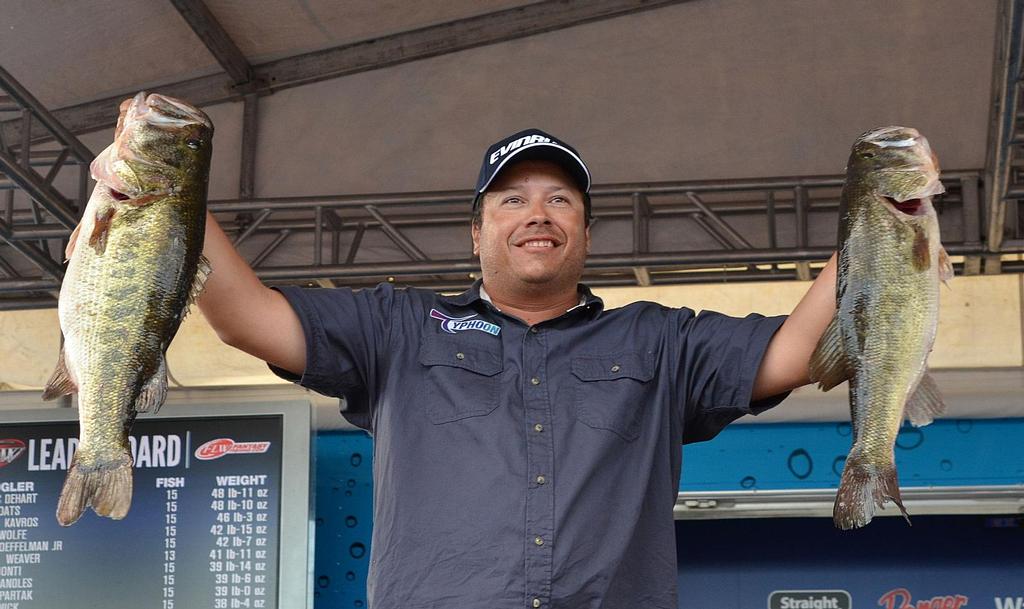 CLEWISTON, Fla. – On a lake like Okeechobee anything can happen from day to day. One day you are having the tournament of your life, and the next you are left scratching your head in frustration. For co-angler Billy Dehart that perfect day came at the perfect time as his tournament-best limit of 23 pounds, 8 ounces Saturday was enough to carry him to victory. 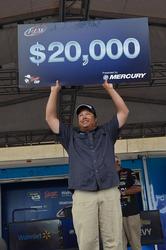 Dehart’s week started out with him tied in 10th place with 15-5. Day two was rougher on the Burlingame, Calif., co-angler with a limit of 9-14 that dropped him to the 14th spot. The stars aligned for Dehart today when he put together that monster bag to push his three-day total to 48-11 giving him the win by a mere 1 ounce.

“The lake setup right for me this week,” said Dehart, who won his first major title. “This was the most comfortable I have felt in years of fishing out here.”

The comfort he felt on Lake Okeechobee this week can be chalked up to the fact that this was his third tournament on the lake in 2014.

“I wanted to stay in Florida all of January until this tournament,” Dehart explained. “I wanted to get a feel for what the weather changes did to the fish and just really get tuned into the bite.”

He got his week off to a solid start by throwing a white 3/8-ounce Ware Eagle spinnerbait with some orange and chartreuse – something he picked up in the Rayovac FLW Series a month ago – through the grass with wind blowing on it. When conditions changed on day two, so did Dehart. He tossed a Rapala X-Rap Prop around sparse lilly pads to produce his catch – including a 4-pounder in the last minutes to bump him inside the top-20 cut. Today, without hesitation Dehart went back to the spinnerbait with 65-pound PowerPro braid and put a 7-pounder in the boat quickly giving him instant satisfaction that he made the right call.

Dehart’s 7-pounder was a great start but it was his 9-14 kicker that helped seal the deal. 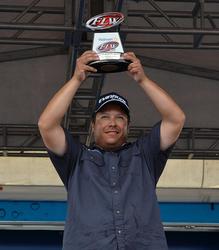 “I started flipping a 5-inch watermelon colored Senko to the tules for a while and it was the only rod I didn’t have braid on. I got bit and instantly got hung in the cattails. I only had 16-pound Sunline so I was pretty worried but the fish swam out pretty quick and we got her in the boat.”

Dehart has fished all levels of FLW competition and has found success in all of them. From a BFL Regional win to multiple top 10s in Rayovac Series and tour-level event, yet a win on the FLW Tour has eluded him – until now.

“This was my first year of fishing full time. I spent my first two years on Tour flying red-eyes every event only to get in the night before the tournament with no prep time. I had to do that because of my job, but now that I can focus on fishing I feel a lot better.

“I really want to thank Jacob Wheeler for teaching me all that he has over that past eight months. I also want to thank my mom and dad along with Hi’s Tackle Box.”

With a cool $20,000 in his pocket from the victory what does the California co-angler have in mind for it?

“I signed up to fish the Northen Division of the Rayovac Series as a boater just the other day except I don’t have a boat. I planned on buying one but this will make it a lot easier.” 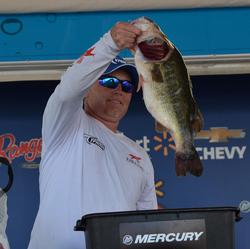 “It feels like there is an egg beater in my stomach,” said the 41-year-old co-angler. “I don’t think I’m going to be able to sleep for a week. I’m driving back to Oklahoma tonight and I’m sure this is all I will think about.”

In practice earlier in the week, Coats was catching good quality fish on a 1-ounce jig but says the slight cool front that rolled in on the first day of the event pushed the fish off that bite. He made a change to sight-fishing beds with a Junebug or black/blue Senko to put fish in the boat.

“I noticed my pro was fishing kind of fast and moving right past the beds on the first day. My Typhoon sunglasses really made it easy to pick the fish out on the bed. From there it was just a matter of putting the Senko in front of them.”

Coats kept that up again on day two but the wind made sight-fishing a little harder. With the conditions presented on day three he made the change to a Gamble Big EZ in McMillan Magic color and it paid off. He threw the Big EZ on 50-pound PowerPro with a 7-foot heavy Falcon Rod.

“Today I bet Greg (Bohannan) and I caught 25 keepers each. My Kicker was caught when it blew up on my Big EZ but didn’t eat it, so I threw a Zoom Speed Worm back in there and she ate it.”

Though he didn’t walk away with the title, Coats is happy to get the season started in the right way.

“Last year at this tournament I got 50th place. I ended up finishing the season 10th in the points. So this is a great start to the year, better than I thought. I want to make it back to the Forrest Wood Cup again and this puts me in the right direction.” 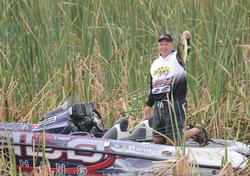 Chuck Kavros of Grass Valley, Calif., was fishing in just his second Walmart FLW Tour event of his life this week. Though it was it his first event on Okeechobee, Kavros showed the poise and ability of a seasoned pro.

“I had a confidence level this week that made me feel like I would do well,” said Kavros, the owner of Top-This (a truck accessory store) who is his title sponsor. “I was actually pretty relaxed in all three days of fishing. I think a lot of that had to do with my practice. I spent time with Darrell Davis and Kevin Stewart earlier in the week and those guys really helped me figure out what to and what goes on out on Okeechobee.”

Kavros experienced what most of the field did this week with a decent morning bite everyday followed by a lull. The bite would pick back up again right before the day was over creating just a few windows to capitalize on the bite.

His bait of choice in the event was a Zoom Speed Worm – Junebug in color.

“I owe a lot of this week to the help I received in practice. I would have never imagined I would make a top 10 this year. A lot fell in line for me this week.”

Rounding out the top 10 co-anglers from day three on Lake Okeechobee: