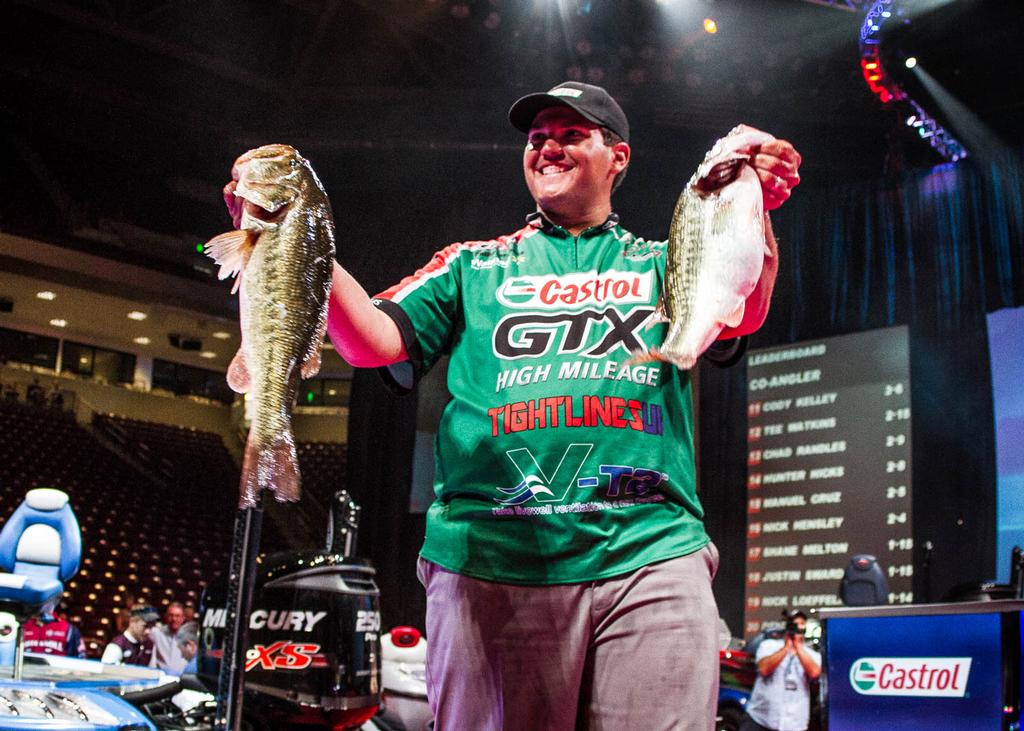 Castrol pro Phillip Jarabeck smoked them on day two. He brought in 17 pounds even and took the lead with 26-4. Photo by Brian Lindberg.
August 15, 2014 • David A. Brown • Tackle Warehouse Pro Circuit

COLUMBIA, S.C. – Suffice it to say that Philip Jarabeck has admired the accomplishments of his uncle, Castrol pro David Dudley, but today he showed there’s plenty of talent in the family by taking over the lead Dudley set on day one of the Forrest Wood Cup presented by Walmart and hosted by Capital City/Lake Murray Country.

Dudley, a past Forrest Wood Cup champion, posted the event’s heaviest sack with his first-round weight of 17 pounds, 14 ounces. Today, Jarabeck hauled in 17 pounds and raced up the standings from his 19th-place finish on day one.

“I was just super-blessed today,” Jarabeck says. “I had a great day today. I culled three or four times. I had multiple keepers that I threw back.”

“Yesterday, it was all deep because I had such a bad morning,” Jarabeck says. “The first couple of hours are crucial to my weight, getting those first couple of good bites, and then I can grind it out deep and get my limit.”

Jarabeck got things rolling quickly today by bagging his first keeper about 15 minutes after takeoff. By 8 a.m., he had another good keeper and a 4-pounder in the livewell.

“I’m just running around first thing in the morning and trying to get lucky and catch a big fish, and then I can go out deep,” Jarabeck says. “Offshore, I’m fishing anywhere from 20 to 25 feet deep, sometimes a little deeper.

“I’m targeting stumps, rocks, brush piles, whatever’s there – fish. I was trying to find a bass down there,” he adds. “There are not many of them to find, but I found a bunch of them today.”

Jarabeck caught his shallow fish on reaction baits, but switched gears to slower presentations for the offshore spots.

“On the bank, I’m just trying to cover water really fast, but out deep it’s super-slow,” he says. “It took a long time to catch one, but they were the ones I needed to catch.”

Site selection was also key, and Jarabeck expressed his thanks for family support and spiritual guidance.

“My wife said a prayer for me this morning that the Lord would guide me, and He really did,” Jarabeck told the weigh-in crowd. “I went to places I’d never even fished this morning and caught a couple of good ones. It’s just super exciting to have such a great day.”

Jarabeck says he’s comfortable fishing the way he likes to fish. Murray’s diverse array of shoreline cover and offshore opportunities remind him of fisheries with which he’s very familiar.

“This lake sets up exactly like two lakes back home, which are Buggs Island and Smith Mountain,” Jarabeck says. “You put those two lakes together and you have Lake Murray. It’s just like home. I feel very comfortable.

“Execution was the key today,” he continues. “I had probably 10 bites yesterday, and I only put three of them in the boat. I hope that doesn’t hurt me too badly in this event.”

To that point, managing the ups and downs of tournament competition is a skill as critical as bait selection for the young angler in his first Forrest Wood Cup as a pro.

“Staying head-strong is the key,” Jarabeck explains. “This is the biggest event of the year, so if you lose one or get one tangled up in the brush pile, move on and go catch another one. Just stay focused and keep your head straight.” 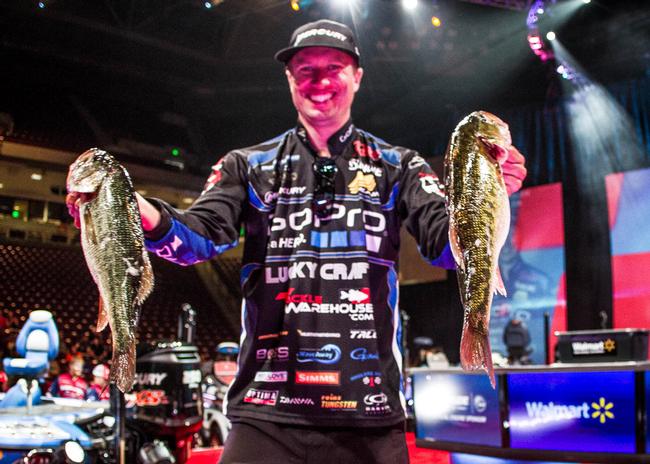 Improving from sixth place on day one, California pro Brent Ehrler now sits just 8 ounces off the lead in second place. Seemingly poised for a shot at his second Forrest Wood Cup title, the 2006 champ caught a limit of 12 pounds, 7 ounces today to tally a tournament total of 25-12.

“It did seem like it was tougher today,” Ehrler says. “I ran through a few places where I really thought I could catch one, but I never did. I ended up having seven keeper bites today, and that’s what I had yesterday.

“I broke one off today, and I broke one off yesterday too,” he continues. “I’ve had a few opportunities. If I can get seven bites tomorrow, I can stay right there in this position. When you catch one, it seems like it’s a 2-pounder. There are some quality fish there.”

Ehrler has been fishing the bank in about 5 feet and mixing in some offshore spots in about 20 to 25 feet. He’s using a mix of reaction baits and finesse rigs.

He’s comfortable that he can catch fish tomorrow, but Ehrler will probably need to look for new spots.

“I have a little pattern running, but I don’t have a lot of places,” the pro reveals. “I don’t think my spots are really replenishing because I went through some spots where I caught them yesterday, and I didn’t catch anything.

“I really only saved one spot that I haven’t hit yet, and we’ll see,” Ehrler adds. “I pulled up there with four fish, caught my fifth and never made another cast. If there are more in there, maybe I can catch one tomorrow.” 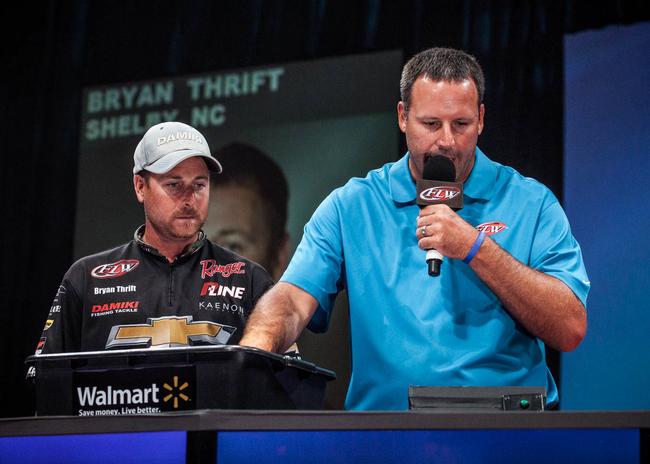 He’s holding steady in third place with an even 25 pounds, but Chevy pro Bryan Thrift expressed concern over his drop in productivity. Yesterday, he caught a limit weighing 14 pounds, 9 ounces, but today he bagged just 10-7.

“I think I blew it today,” Thrift says. “My whole tournament is based on me catching three or four good ones on top every morning. I had good bites today just like yesterday, but they weren’t eating the bait. They’d just roll at it or slap at it or blow up on it and not get the bait in their mouths.

“That’s the nature of the beast when you’re throwing topwaters,” continues Thrift. “They’re not going to eat it every time. It’s not like they were nipping at it. They were trying to eat it. It’s just bad luck that they missed it.”

The Shelby, N.C., pro says his topwater area is a fairly generic stretch of bank with grass, docks, points and rocks. However, he believes the area holds a good group of fish that seem eager to bite, at least in the mornings.

Thrift also has an offshore spot that holds limit fish. He caught seven keepers on reaction baits out there today and brought three of them to the scales. Pairing the two strategies is what he’s depending on for his daily bags.

“I have a couple of places where I feel like I can catch a limit pretty easily,” he says. “It’s going to be a small limit – 9 or 10 pounds – but if I can get three or four of those 2 1/2- to 3-pound topwater fish, I know I can go catch one keeper [to fill my limit] in five minutes. So, I have to get that topwater bite going again. That’s going to be critical if I’m going to be any threat at all to win this tournament.” 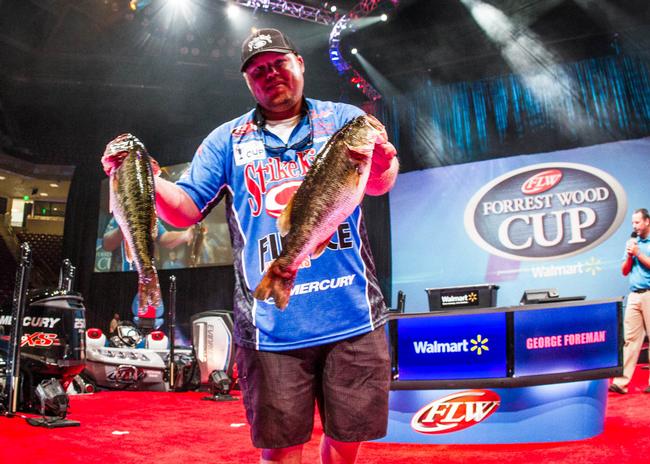 Catching 14 pounds, 12 ounces, the second-largest bag of day two, pulled Michael Wooley up 13 spots from 17th to fourth. His two-day total weight is 24-4.

Fishing from mid-lake to the dam, Wooley sampled 15 to 20 rocky-bottom spots in about 20 feet. He’s fishing what he described as an old-school summer tactic, adding that his action was spread throughout the day.

“Usually, I’d catch one or two, and then I’d go an hour, then I’d catch another one,” he says. “It was about an hour in between my catches. I had one spot where I caught a good one, my co-angler caught one, I culled one and he culled one. That was about 1 o’clock. They’re really spooky, so once you catch one or two, you might as well just pack it up and let it rest. If you get two off of one spot, that’s doing really well.”

Interestingly, Wooley’s strategy differs from the prevailing opinion that consistent success depends on a mix of shallow and deep patterns. He’s planning on sticking with the offshore game in hopes that he can maintain his bite in case the thinning bank scene diminishes with weekend boating pressure.

“I think it can happen deep,” Wooley says. “I don’t know what will happen tomorrow with the boat traffic. I don’t think it will affect the deep fish.” 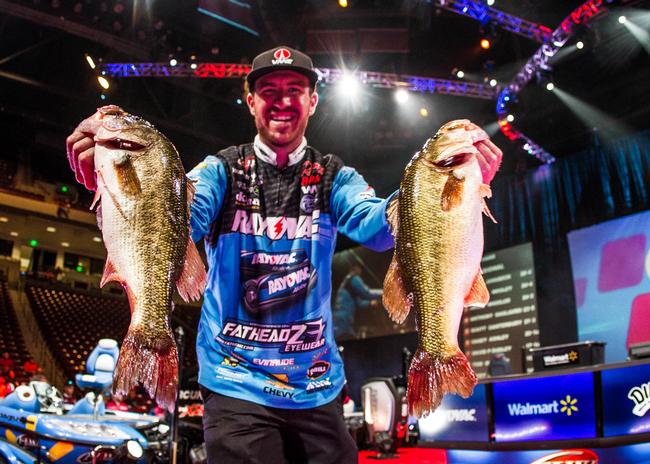 Wheeler’s day spanned the lake from near the dam to the Saluda River. His was a run-and-gun strategy designed to work the numbers game by hitting lots of shallow cover.

“I’ll stop, and I’ll literally jump on the deck of the boat before the boat stops, make five casts, go around the corner to the next little deal and just try to cover as much productive water as I possibly can,” Wheeler says. “That’s the key to this lake, and I feel like if I can run enough productive stuff that I feel like bass live on, I’m going to get five bites throughout the day.”

Wheeler says he’s catching his fish solely on reaction baits. He missed his limit by one fish today, but he’s pleased that he was around good quality.

“I’m definitely ‘fishing the feel,’” he says. “Today, I made a really big move at about 1 o’clock. I ran to a little place that I had never fished before, but I thought it looked good yesterday. I marked it on my GPS with a little house and said, ‘I think one lives there.’ I ran back there, and it was the right time of day. I pulled up and caught one about 3 1/2 to 4 pounds. That was a really key decision that helped me. Four fish for almost 12 pounds – that’s almost as much as I had yesterday with five.”

“I’m looking to cover some new water,” he says. “These fish aren’t wolf-pack fish; they’re fish that live in these areas. I don’t feel like there are groups of them, so once you catch a keeper, you need to move on. I’m just going to continue covering a lot of water and trying to get the five right bites.”

In the Forrest Wood Cup, 45 pros and co-anglers from the Walmart FLW Tour, Rayovac FLW Series, Walmart Bass Fishing League, FLW College Fishing and The Bass Federation are randomly paired each day, with pros supplying the boat, controlling boat movement and competing against other pros. Co-anglers fish from the back deck against other co-anglers. The full field competes in the two-day opening round. After day two, a co-angler champion is crowned and the pro field is pared to the top 20. After Saturday's weigh-in, the pro field is cut to the top 10. A pro champ is crowned on Sunday, with a $500,000 prize paid to the winner.

In addition to FLW Live, FLWOutdoors.com and ForrestWoodCup.com offer real-time updates from the water.

Check out all that FLW has in store at the FLW Expo, including a barbecue contest, free Rodney Atkins concert and a jam-packed tackle show at ForrestWoodCup.com.