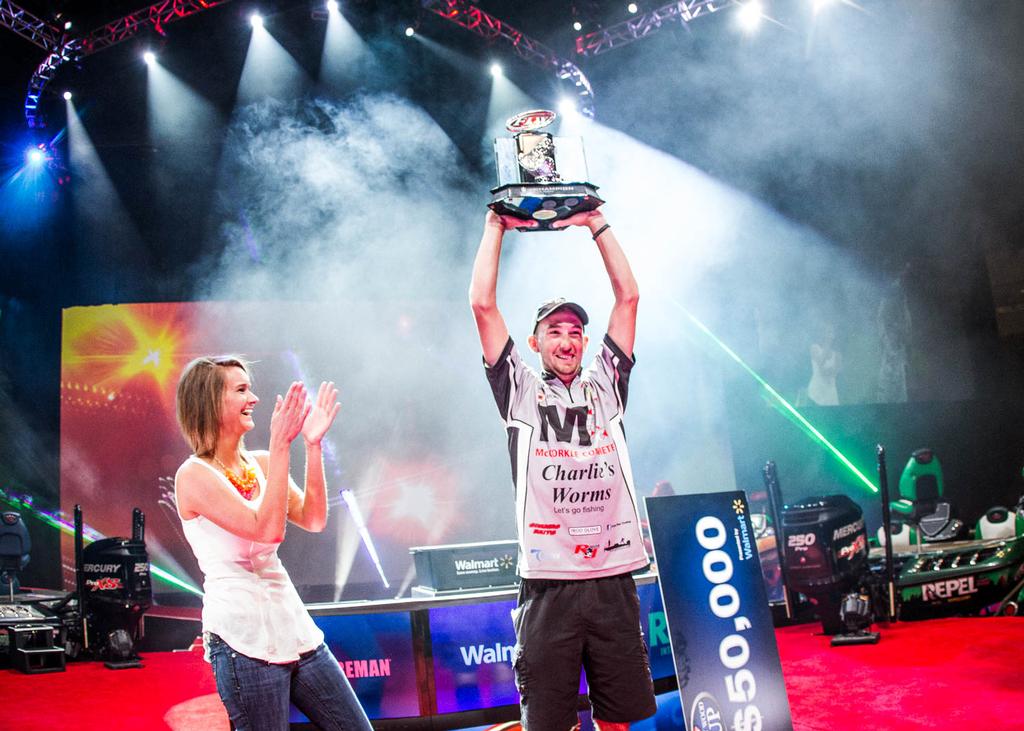 COLUMBIA, S.C. – When Bryan New left the dock at Dreher Island State Park this morning, he could hardly control his excitement. Before him lay an opportunity, and it was an opportunity he believed he could seize.

After catching 7 pounds, 9 ounces on day one of the 2014 Forrest Wood Cup on Lake Murray, New came into today’s competition atop the co-angler leaderboard by more than 2 pounds. All he needed to do was catch a couple of solid fish and he’d have a shot at the win. Three keepers would almost certainly seal the deal. After two consecutive top-five finishes at the Forrest Wood Cup, this was New’s best shot at the title.

And he went out and earned it.

New landed three keepers today that weighed 8 pounds, 5 ounces to give him the edge over runner-up Jason Johnson with a two-day, seven-fish total of 15-14.

After a tough practice with Chevy pro Bryan Thrift, New was aware that this tournament would be a grind. The results backed up the expectations, considering the co-angler field was unable to bring in a limit of bass through two days of competition. New stayed focused and made the most of every bite and in turn earned a $50,000 payday for it.

“I had such a great year and really a blessed year,” says the 24-year-old co-angler. “Just all the support I get from my family, my girlfriend and sponsors means so much.

“Every time I go fishing I just try to read the day and read the water to help me understand what to do, and I fish as hard as I can,” he adds. “That is what I did this week.”

Being from North Carolina, New has known Thrift for some time but spent this season traveling and practicing with the Chevy pro. While he credits Thrift with teaching him many skills, New also owes a debt of gratitude to another longtime friend.

“There’s no doubt that fishing with Bryan has helped me become a better angler,” explains New. “But I do have to say that a friend of mine, Roger Pope, took me under his wing when I was younger and taught me about fishing and how to make things happen. That meant more to me than anything.”

In his three Cup appearances the worst finish New has posted is fifth, and his lowest finish in the regular-season points race is 13th. Since his debut on Tour in 2012 New has continuously improved. The question is: When is it time to leap to the pro side?

“I’ve got way too much to learn yet,” says New. “I really haven’t spent enough time in the front of the boat making my own decisions. Maybe in another year or two I’ll be ready to think about that. I’m on top of the world right now. I mean, what more could you ask for?” 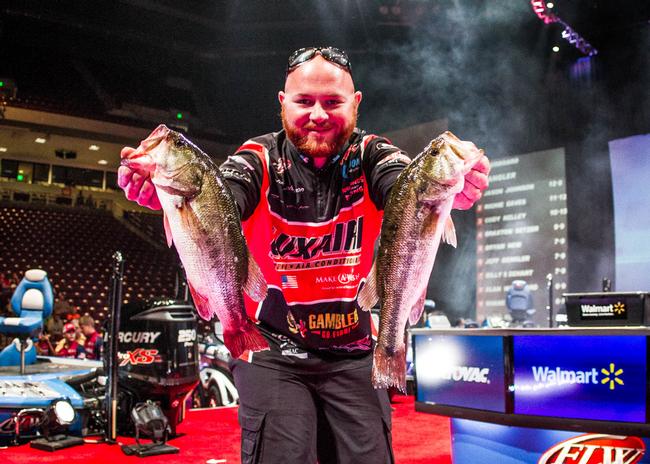 Jason Johnson of Gainesville, Ga., went out with a bang in his final event as a co-angler on the Tour level. He brought the day’s best catch of four bass weighing 8-7 to challenge New for the title of Forrest Wood Cup champion. Johnson’s total weight for the event stood at 12-8 for just six bass but it was enough to help him walk away with $10,000 in winnings.

Johnson made the announcement at the final FLW Tour stop at Kentucky Lake that he would be fishing as a pro in 2015 and he reinforced that this week.

“I still plan on making the move to the front of the boat next year,” says Johnson. “It is something I have thought about for a long time and I couldn’t be more excited to get the season going.”

Not surprising was the fact that Johnson caught five of his keepers on a drop-shot rigged with a pink Gambler Sweebo Worm mostly because of the fact his home lake is Lake Lanier and he practiced with Brent Ehrler. His other fish came on a G Money jig.

After having a phenomenal year on Tour Johnson received the most attention during the Kentucky Lake Tour event when his final-day catch was disqualified due to a rules infraction which cost him the Co-angler of the Year title. Despite that tough break the Georgia co-angler had bigger things on his mind this season.

“At the beginning of the year I found out my mom was diagnosed with breast cancer. She underwent 18 consecutive weeks of treatment and overcame it. She was here in the audience. This was the first Friday I got to fish this year where I wasn’t thinking about my mom being in chemo. It’s very special to have her here.

“I had a great year with Luxaire Heating and Cooling, Ranger, Gambler and John Megle Chevrolet. I fished clean all week and am happy with how I ended my co-angler career.”

Jumping from eighth place to finish in third was Nauvoo, Ill., co-angler Richie Eaves. For his efforts this week Eaves claimed a $9,000 check.

Eaves fished in his second Forrest Wood Cup this week and got things rolling with two bass weighing 3-14 on day one. He put three quality bites in the boat on Friday to add 7-14 to his overall weight boosting his total to 11-12.

“I traveled with Tom Monsoor this season and practiced with him for this tournament,” says Eaves. “We actually had a halfway decent practice so I thought the tournament would have been a little better but obviously a lot of how you do depends on who you were paired with.”

A buzzbait and Carolina-rig were the weapons of choice for Eaves on Murray. He kept it simple and threw his buzzbait on 15-pound fluorocarbon and rigged either a worm or Zoom Brush Hog (green pumpkin) on the Carolina-rig.

Another big thing for Eaves was fishing clean. He never lost a fish all week and in a tough tournament like this one that goes a long way.

“I’d really like to thank Tom (Monsoor) for everything,” added Eaves. “If it wasn’t for him I wouldn’t be out here.”