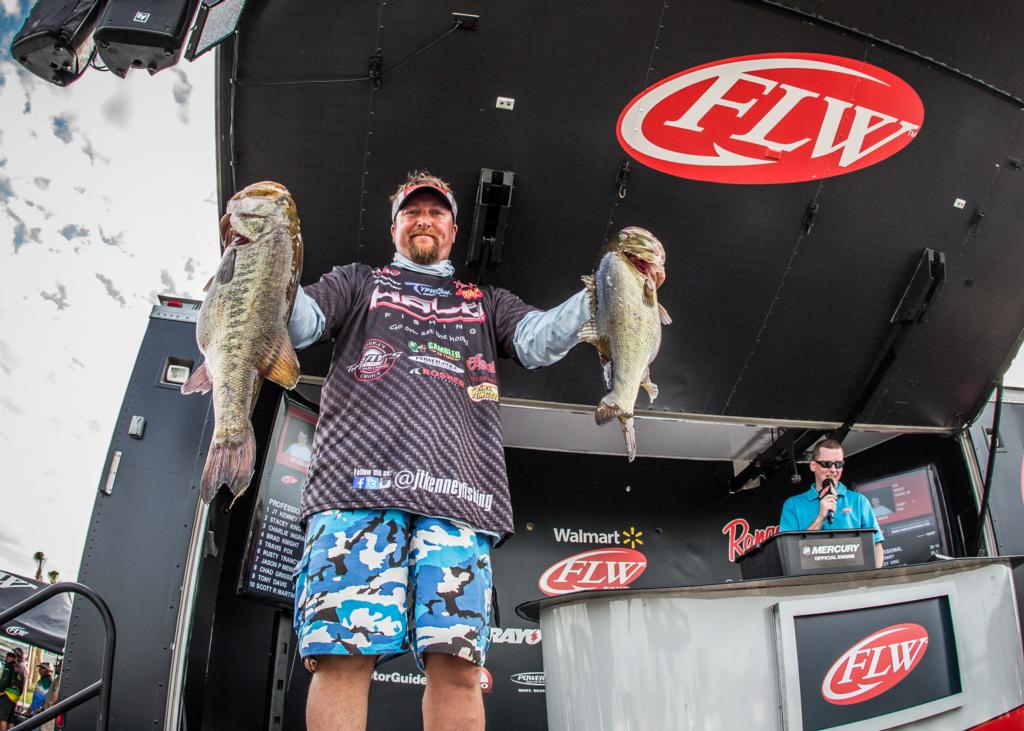 JT Kenney! He snagged the day one lead with an impressive 29-14 - they were all giants! Photo by Curtis Niedermier. Angler: Jt Kenney.
March 5, 2015 • Rob Newell • Archives

There was fuel, and there was flame.

The fuel was in the form of a delayed largemouth bass spawn on Lake Toho that had been pushed back for several weeks due to low water temperatures and high water flows through the Kissimmee Chain of Lakes. The biological clocks of Toho’s bass have been ticking, so to speak.

The flame was in the form of a fast warm-up over the last three days, a full moon occurring right now and water temperatures rising nearly 10 degrees in the last 72 hours.

At the day-one takeoff of the Walmart FLW Tour event presented by Mercury this morning, everyone held his breath for the combustion that was about to occur.

And when fuel met flame there were a few fiery flare-ups, but not of the size that many expected.

In all, the 20-pound mark was reached by seven anglers on a warm, balmy day that had five-alarmer written all over it.

Exactly why the bite was not as good as expected is still in question. Many pros reported a vanishing act of bedding bass that had just started to show up during practice, but have now disappeared despite highly favorable conditions

At the top of the standings are Florida ace JT Kenney and Missouri veteran Stacey King, who checked in with 29-14 and 28-1, respectively.

Kenney was the only one who really scared the 30-pound mark. He put in a considerable amount of time this winter scouting Toho and Kissimmee, looking for the exact kinds of places where bass could spawn. In all, he found nine small areas that held the perfect ingredients of vegetation and bottom composition for the exact stage of the spawn and conditions that the anglers have been faced with this week. During practice he fished the potential areas extremely slowly with hookless baits, daring bass to breathe on his lure so he could mark their exact locations on his GPS. In essence, he was “looking” for bedding bass without really seeing bass at all.

“I actually color-coded my waypoints,” Kenney says. “If I thought the fish that bit was a big one, I marked it in red. When I thought they were smaller fish, I marked those with other colors. Today, I went to the place that had the most red dots [one spot with seven waypoints], and I’m pretty sure I caught all but one.”

One of those “red dots” was an 8-15, which anchored Kenney’s limit today.

The place that Kenney fished today, the one with the most red dots, is also his smallest area. He has plenty of other areas, but his other spots have only one to three waypoints apiece. He also says he has no intentions of returning to the area that he fished today.

With North winds expected to blow in tomorrow, Kenney is prepared. He says he intentionally sought out places in “all four corners” of the system, so to speak, and in both lakes in order to have water to fish no matter the conditions.

“I really tried to plan and anticipate for every wind direction,” says Kenney. “I want to be careful not to fish in a place tomorrow that might be more protected later in the week. But who knows. I’ve been at this game a long time, and I know it can all go to pot in hurry.”

A 19-pound limit on Lake Toho today was enough to crack the top 10 on the pro side. Co-angler Chad Randles matched that total while fishing from the back of the boat to take the early lead on the amateur side. What’s more amazing than Randles’ catch is that his lead is less than 1 pound. Kentucky co-angler John Hunter is in second with 18-04, which included the Bridgford Big Bass, an 8-11 hawg. Not far behind him is Ken Keirsey of Oklahoma with 17-1. The co-angler champion will be crowned at tomorrow’s weigh-in.