Wheeler Back in Front 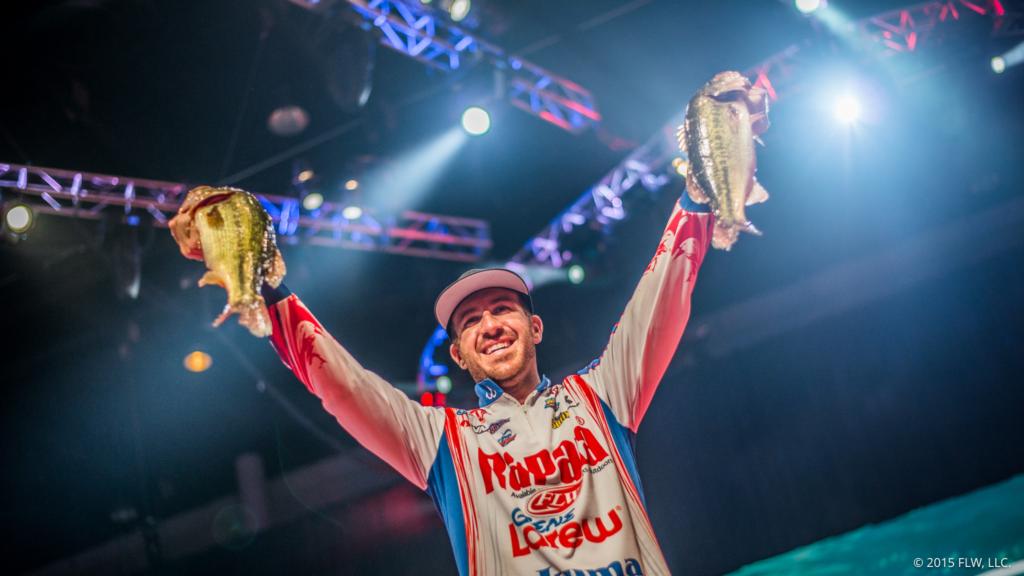 The weather across the Ozarks was unstable and volatile today – much like the leaderboard on the third day of the Forrest Wood Cup presented by Walmart at Lake Ouachita.

First there was rain. Then sunshine. Then wind. Then another round of storms thrashed the top 20 pros just before check-in.

Names on the leaderboard swirled about as well. Weights were the lowest of the week, with Bryan Thrift checking in the day’s best weight of 14 pounds, 3 ounces for his biggest move of the tournament from 10th to fourth place. But some, like day-two leader Ramie Colson Jr., endured the dark clouds of not being able to complete a limit, which dropped him to third place.

By day’s end it was Jacob Wheeler who found the sunniest spot atop the leaderboard, regaining his first-place position from day one with a 14-pound limit, which gives him a three-day total of 41 pounds, 1 ounce and a scant 12-ounce lead over second-place pro Brad Knight.

Interestingly, as Wheeler and Knight battle it out on the final day, their strategies are very different. Wheeler is running a true pattern across the lake. Knight, however, is banking primarily on one area for the win.

From the beginning Wheeler has ascertained that he knows the pace, the technique and the baits to win on Lake Ouachita in August.

His two-part approach is to haunt schoolers in the morning for a few keepers to get his livewell wet. Then at about 9 a.m. he hits the bank to gamble on the better quality, yet more inconsistent bream-eating bass. For three days, his plan has worked, except for a small hiccup on day two when he lost three 3-pounders that would have given him a bit more cushion going into the final day. 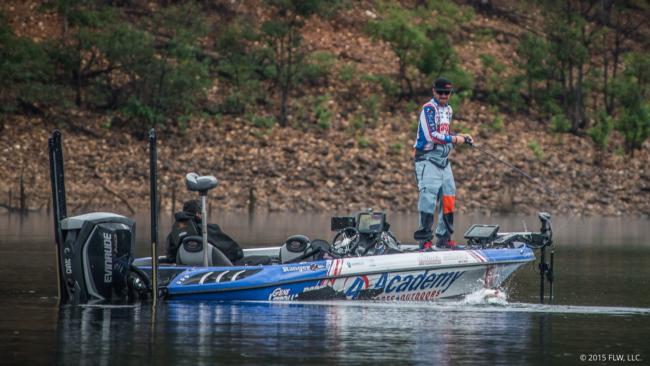 “I said from the beginning it would take two 15-pound days and two 12- to 13-pound days to win,” Wheeler says. “I feel I’m on that pace. I had the bites yesterday to pad that a little bit, but those bites at least let me know that I’m doing the right thing.”

Today Wheeler started the day with three keepers from the schooling spot, and then he hit the shallows to catch three more off the bank. One of those was close to 4 pounds – the exact kind of kicker Wheeler is counting on to reach the teens and stay on the winning pace.

No matter if he is fishing schoolers or running the bank, Wheeler is doing nearly all his damage on topwater walking baits. During the day he is rotating through a variety of walkers, but his two primary choices are a Storm Arashi Top Walker and an older Reaction Innovations Vixen in a smaller size than the standard Vixen.

“I have one bank that I hit each day because it has produced several of my better fish,” he says. “Other than that I am constantly running new water, fishing fast and staying on the move. I plan to run the exact same program tomorrow: schoolers early and then running the bank the rest of the day.”

Should Wheeler win on Sunday, he would make history as the first two-time winner of the Forrest Wood Cup.

For complete details and updated information, visit the Forrest Wood Cup page. For regular updates, photos, tournament news and more, follow FLW on Facebook at Facebook.com/FLWFishing and on Twitter at Twitter.com/FLWFishing.