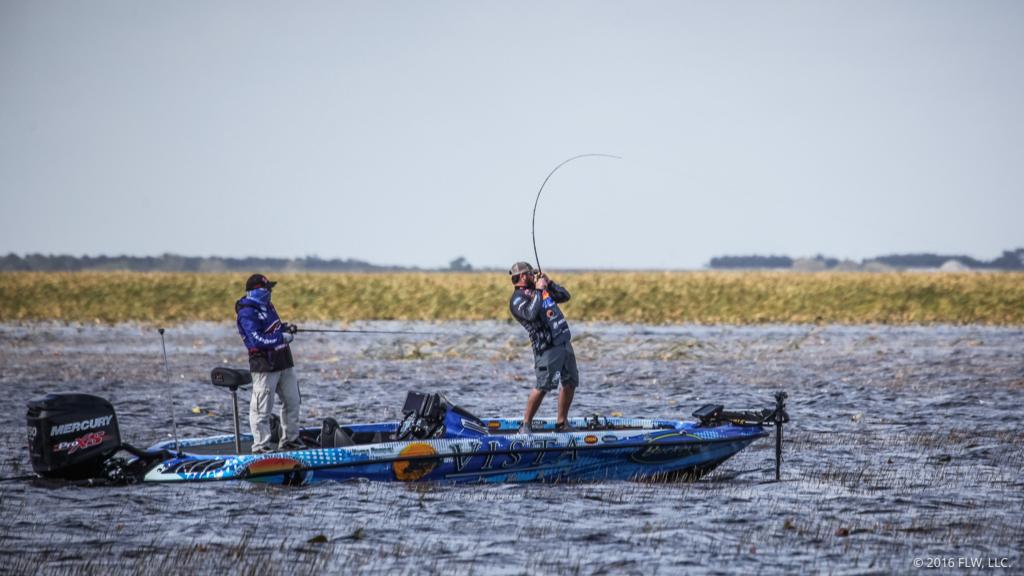 Alabama pro Alex Davis is the unofficial leader with 30 minutes remaining until the start of weigh-in. He checks in with 19 pounds. That's the best limit we've heard of so far. Davis knows how to fish shallow grass from his experience as a guide on Lake Guntersville. Davis has said that this is an important season in his career and that he needs to rebound if he wants to stay on Tour. Looks like the young gun is off to a good start.

Plenty of limits are already boxed up. The first flight checks in in just a few minutes. Tune in to FLW Live by clicking on the banner at the top of the FLWFishing.com homepage to watch the weigh-in.

With that, we're signing off the Day 1 Coverage Blog. Check back here tomorrow morning at 7:30 a.m. ET for the day two coverage.

2 p.m.: The hunt is on for afternoon kickers

There's a traffic jam of anglers in the 8- to 13-pound range. It'll take a late-day kicker to move up the leaderboard and get in position to make the top 20. The afternoon bite that many pros were relying on hasn't materialized just yet, meaning pros with late boat draws might be in the best position to make a move.

Weigh-in starts in an hour. If we hear any more reports of big fish catches we'll update everyone via Twitter and the coverage blog. 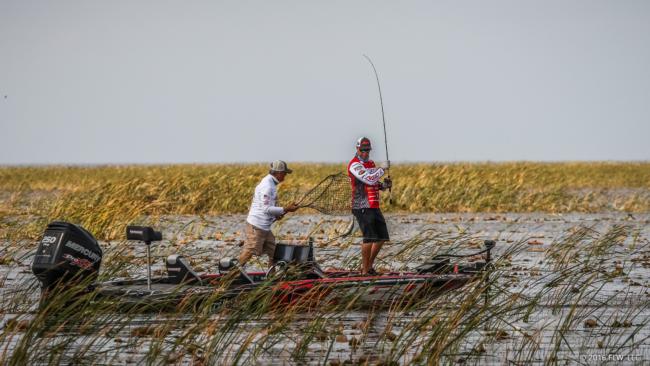 Some of the most popular community holes on Lake Okeechobee are failing to produce today, including Harney Pond and the Monkey Box. In fact, the entire north end of the lake seems to be letting down pros. It's probably partly to do with the south wind that's been blowing into the area all day. OTW reporter Rob Newell stopped in where Brett Hite won the tournament here two years ago, and it was vacant. And he says he's seen about 30 boats up north, but none was catching fish.

Tomorrow, expect a major change, as the wind shifts around and blows out of the north. Whoever makes the right adjustments will make it through to the weekend.

Word is that the bite has been better in the afternoons as new fish move in and bass start to settle in on beds or staging areas. If that's the case, we'll probably still see some mid-20s limits. Watch and see on FLW Live starting at 3 p.m. ET.

With less than three hours left to fish before the first flight comes in, many anglers are hunting for that critical big bite that makes a difference in getting a check and contending for the top 20. No one has managed to put himself in a position to be the leader, though reigning Forrest Wood Cup champ Brad Knight is trying. He has about 12 pounds so far. Knight just made the top 12 at the Bassmaster Southern Open on Toho last week and certainly seems to be on a hot streak. Shin Fukae also has a decent limit with two solid kickers.

Certainly, a low teen weight won't be in the lead by day's end. Right now, though, it's important to be chipping away at the 20-pound mark.

The action is coming at the hands of both flipping and reaction baits. Lipless crankbaits are popular, as are swimbaits. Fukae is dedicated to slowly picking apart a particular section with a flipping bait.

Clouds are starting to roll in over Clewiston. If we get some overcast conditions, the reaction bite could really pick up. Stay tuned. We'll be updating here right up until weigh-in starts. 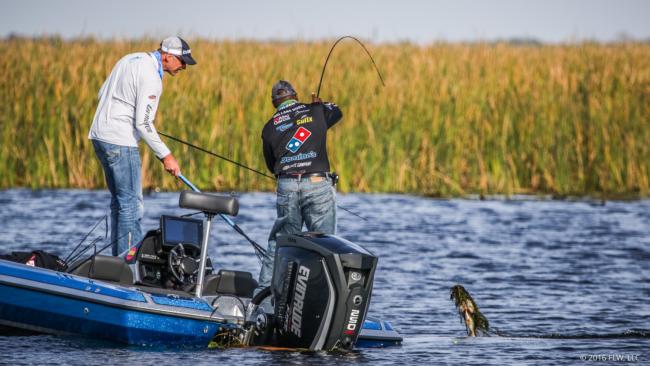 Learn more about the stuff the pros are fishing this week on Okeechobee with this feature on aquatic plant identification. We promise it's not as boring as botany class. There's some great how-to info here.

Kevin Johnson – one fish for 5 pounds

Jayme Rampey – limit for 7 or 8 pounds

Troy Morrow – limit with a 3-pounder

Follow the FLW OTW Twitter feed for up-to-the-minute reports. Scroll down the page to see the feed. 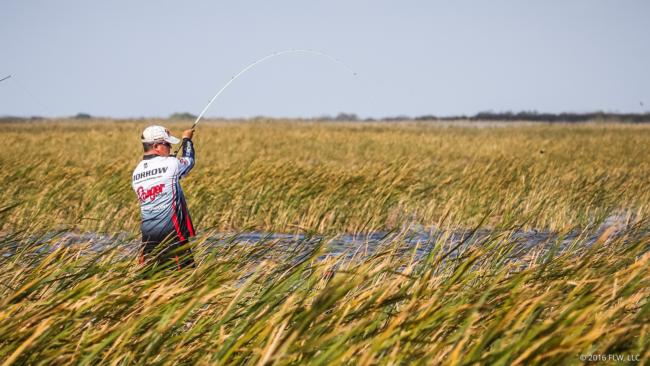 Limits are rolling in from across the lake now. Get a glimpse of a few of the catches in our on-the-water photo gallery.

So far, most of the limits are small, but we've heard of some 4- to 6-pound fish being caught. The biggest factor today has been the south wind. It's muddied a lot of the lake's northern waters, forcing pros to head south or move deeper into the protected areas within the reed line.

The wind is only supposed to blow harder this afternoon as a front moves in, bringing rain and cloud cover.

Stay tuned for a more detailed update in the next hour.

Add Bryan Schmitt and Troy Morrow to the list of anglers with limits. Morrow has a 3-pound kicker and has already culled. Schmitt says his best is a "good one," but we're not sure exactly how big it is. He's certainly an accomplished grass fisherman and has the skills to get it done here in Florida.

Cody Meyer was the first to secure a limit today. It's a small catch, but he's off to a solid start. If Meyer can get over the Florida hump, he should be in the running for AOY by season's end. The schedule sets up just right for him. 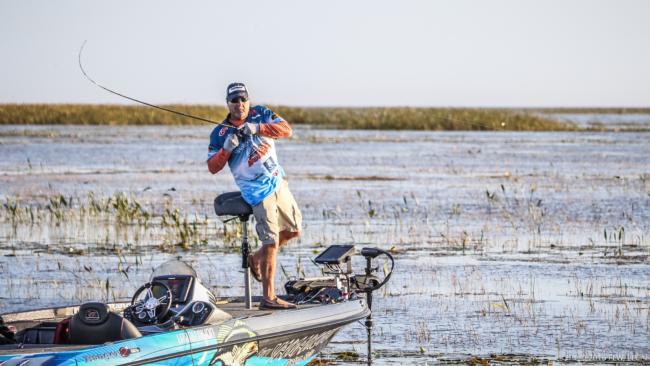 Chase Brooks is the first pro to land a quality keeper on day one. His 4-pounder might go a long way at weigh-in. Most of the anglers in the field are picking through small bass to get their keepers. Several pros have three or more in the boat, but no limits have been registered thus far.

Overall, it's a pleasant day here at Okeechobee. The sun is up, with a light breeze blowing. Maybe this afternoon's forecast cloud cover will help turn on these fish.

8:30 a.m.: Anglers are spreading out and catching fish

There's a bit of a crowd in the South Bay area, but the field has spread all across Okeechobee, even to parts of the lake not traditionally fished in these early spring tournaments. The fish seem to be biting. Several pros already have multiple keepers in the boat. The only catch is that none of the big girls have shown up yet. All the keepers registered so far have been small. 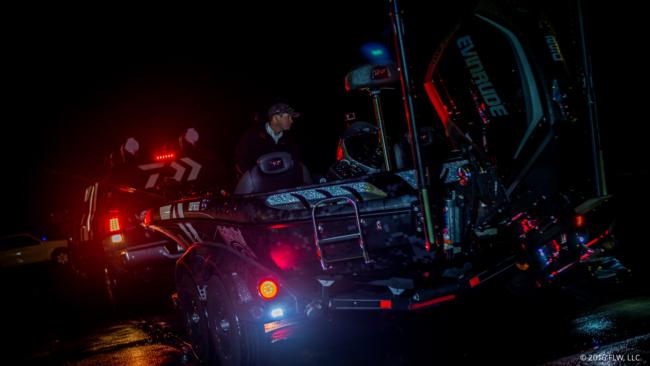 Excitement and wonder pretty much sums up the feelings of the pros who idled through the lock from Roland and Mary Ann Martin’s Marina and Resort and into Lake Okeechobee this morning for day one of the Walmart FLW Tour event presented by Ranger Boats.

The excitement is understandable … it’s day one of the 2016 Tour season. Everyone is on equal footing. Everyone has a shot at Forrest Wood Cup qualification and Angler of the Year. Anticipation is high.

Wonder stems from the current conditions of Lake Okeechobee. Currently, the water is about 16 feet above sea level. A local guide here at the marina says that’s about 3 feet higher than it was at the Costa FLW Series event just a few weeks ago. For reference, he says the U.S. Army Corps of Engineers will shut the gates on the lock that separates Clewiston from the Lake when the water level reaches about 15 ½ feet. The highest he’s seen it ever was 19 feet; the lowest was 9 feet.

More importantly, it’s been about a decade since the water was this high. From a fisheries standpoint, it’s perfect timing. High water this spring means the fish have new protected areas for spawning, which spells good news for the future of Okeechobee’s trophy bass population.

From a fishing standpoint, a few anglers are scratching their heads. Most non-locals have never seen Okeechobee this high. Favorite grass beds are fully submerged, and new backwaters are accessible. No one really knows where the fish will go and how this tournament will be won … except maybe a few locals. The Okeechobee sticks all seem very confident today, but none was willing to mention a game plan. They’re keeping their secrets. If you chose Okeechobee locals for your FLW Fantasy Fishing team, you’re probably in good shape to win your league or maybe earn a cash prize.

As for the non-locals, it’s important to not get stuck fishing memories. An open mind and, perhaps, an adventurous spirit will come in handy as the 2016 season gets underway. And after all, this is Okeechobee, where one flip into the right patch of grass could result in a double-digit bite that can make a pro’s tournament. No one’s ever out of the game.

Expect pros to bring a few spawners to the tanks and some sight-fishing to go down. But more likely, a mix of winding baits for prespawners and blind flipping in spawning areas will dominate this event.

The biggest wild card is the weather. The forecast is calling for a high of 82 degrees today, with rain overnight and a nearly 20-degree drop in the high temperature for tomorrow. Such an abrupt change could really slow down the bite, so getting off to a strong start on day one is critical.

Sky: sunny, with a few clouds; cloud cover moving in this afternoon