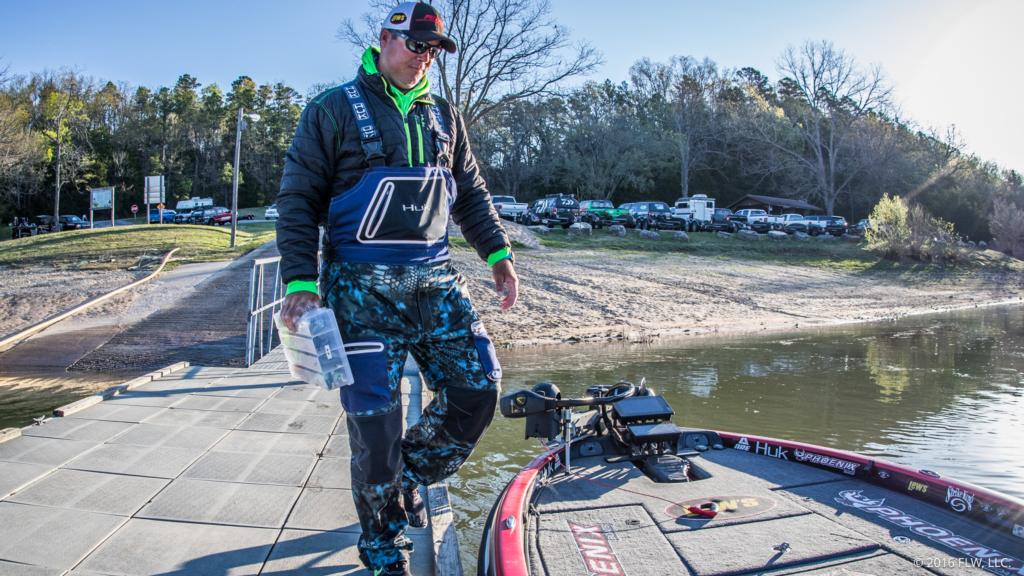 After winning the Forrest Wood Cup on Lake Ouachita last fall, Brad Knight certainly has an affinity for Arkansas. Like many, Knight has stubbed his toe a time or two on Beaver Lake, but he’s made $10,000 each of the last two stops at the lake, and the Ozark impoundment fishes a little like some of the lakes he’s familiar with back in east Tennessee. I joined him for the final morning of practice to see how he broke down Beaver before the Walmart FLW Tour presented by Jack Link’s kicks off in earnest on Thursday. 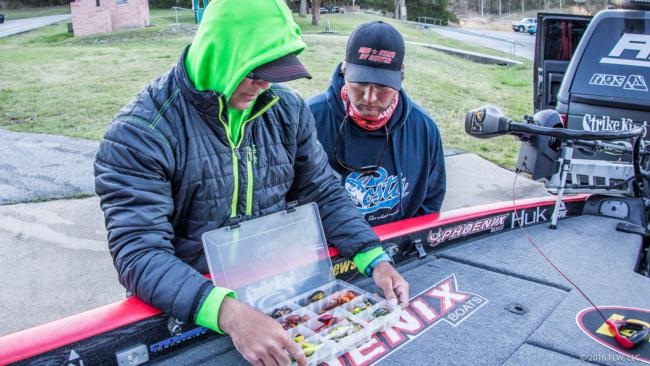 Because the morning started out so cold (temps had dipped into the 40s overnight), Knight elected to take it a little easy and start things off at about 7:30 from Rocky Branch. At the ramp, Knight paused to catch up with Clayton Batts who was searching for a Wiggle Wart in a certain color pattern that he only had one of. Unfortunately, despite being a proud owner of a large collection of hand-painted originals, the color Batts was looking for seemed to be unique. 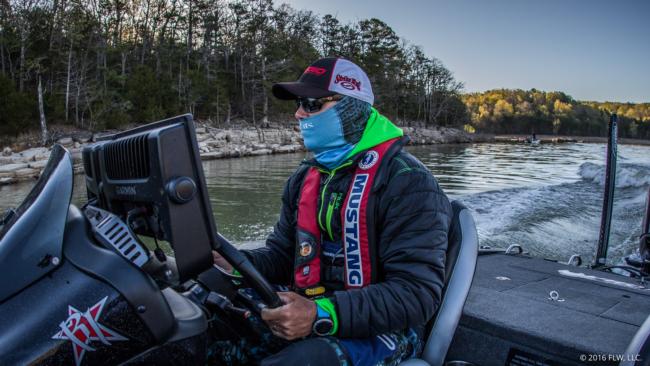 After putting in, Knight rolled out of Rocky Branch and made a brisk run toward the main lake. This year, Beaver Lake is fishing a little differently and the water is dirtier than usual. Every year on Beaver is a little new, but this tournament is setting up to be especially unique. Pretty quickly in practice, Knight had dialed in on the water color he wanted to fish, and the rest was a matter of identifying productive areas and techniques on the part of the lake that had roughly the right color. 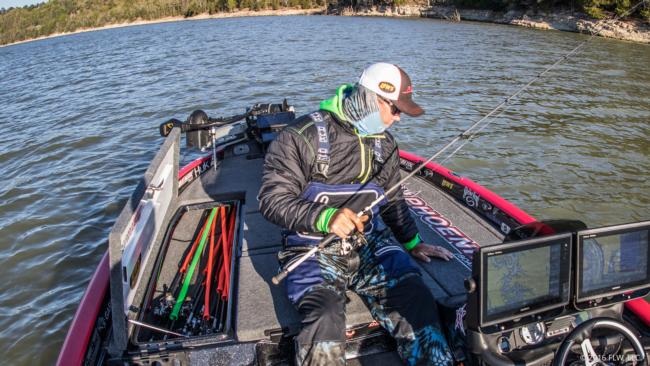 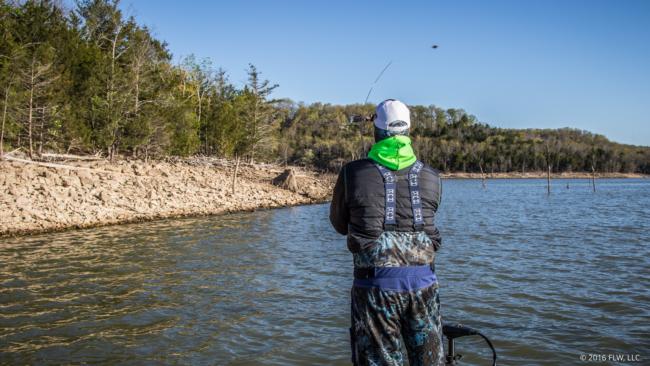 At his first stop, Knight pulled out a variety of Lew’s Custom Speed Sticks to throw everything from a spinnerbait to a crankbait and got to work. He started out on the main body near the mouth of a creek, and worked his way back into the creek.

Right off the bat, I noticed that the cranking expert was using a spinning rod to toss his lighter baits instead of a baitcaster. Having built and fished with more handmade balsa plugs than anyone could count, Knight says he’s able to get the most out of them in windy conditions with a spinning rod. He also opts for the spinning setup when he isn’t casting at specific targets. Never backlashing in the wind is a nice benefit, and as the day wore on, I was easily convinced that his liberal use of a spinning rod was a good thing. 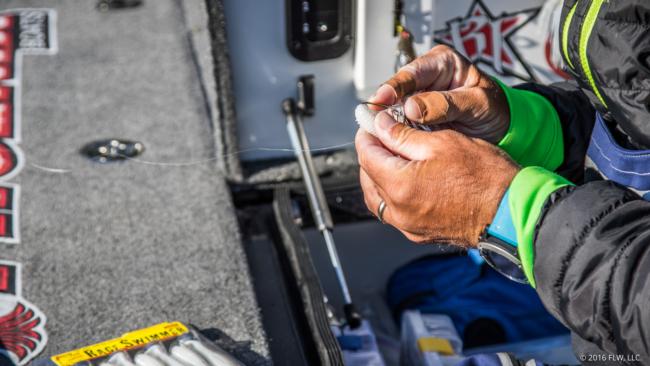 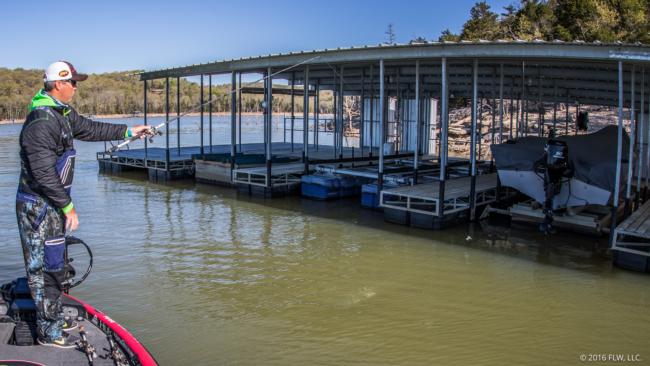 As we worked back into the creek (so far with not much to show), Knight rigged up a vibrating jig to skip around the docks he encountered. Like many pros, he can effortlessly skip about anything under a dock and he picked the docks and a few laydowns apart almost perfectly with no results. When he reached the end of the pocket, Knight powered back up and headed to the other side of the creek. 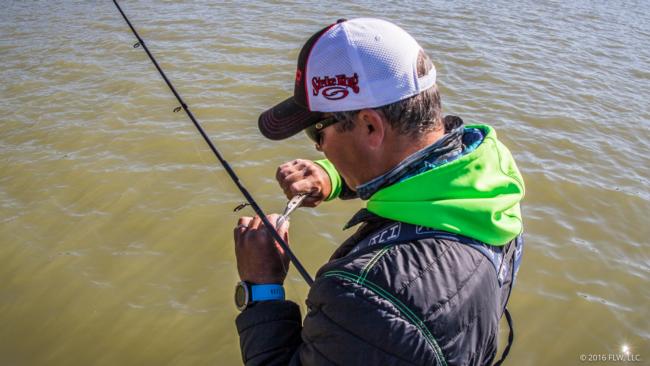 After taking a moment to tune a crankbait he’d built himself so that is ran perfectly, Knight got to work rapidly cranking along some shallow banks with pea gravel, small rock and the occasional stretch of slightly submerged bushes. Alas, it was for naught, and the morning continued to be brutally slow. For Knight, it called to mind the fact that despite the colored water and good reports, Beaver Lake isn’t a gigantic body of water and that pressure can still get to it pretty well. 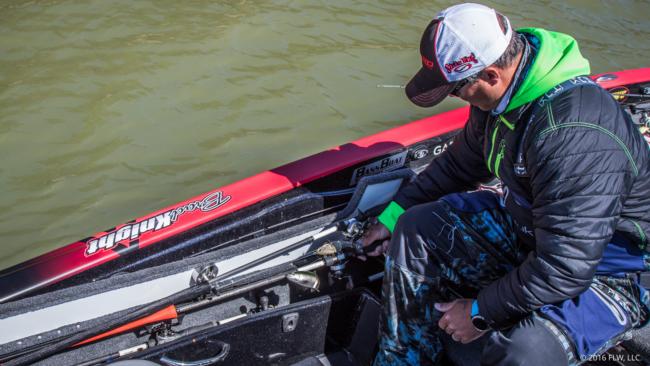 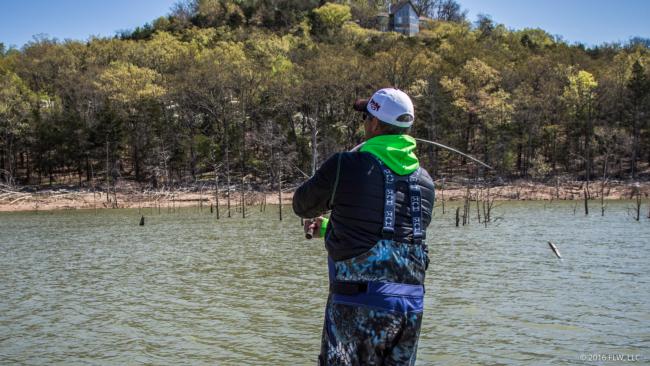 After running into Batts again, Knight bailed out of the creek and headed to a nearby main lake pocket and broke out his swimbait stash. Swimbaits have figured into Knight’s tournament success before, but they haven’t led him to a win… yet. Perhaps more than any pro on Tour, Knight has confidence in the ability of a big swimbait to garner strikes from winning fish as well as show him their location.

Settling on a Roman Made Negotiator, the swimbait expert fished it almost like a fluke around some bushes and through the back of the pocket before putting it up with no results. 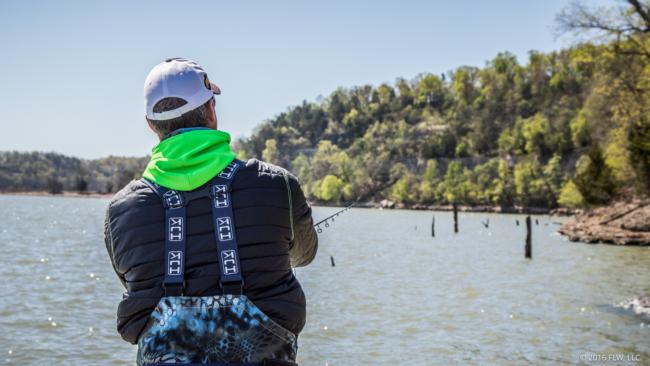 Mindful of the slow morning, our next move was to a steep main lake channel swing to search for some willing spotted bass. Knight says he enjoys the challenge that Beaver Lake offers, but feels that even when he comes away with a good check he’s endured some kind of heavyweight bout due to the difficulty of getting five good ones. Because of that, he knows just how key a good 2-pound spotted bass can be, and the time was ripe to hunt for a few. 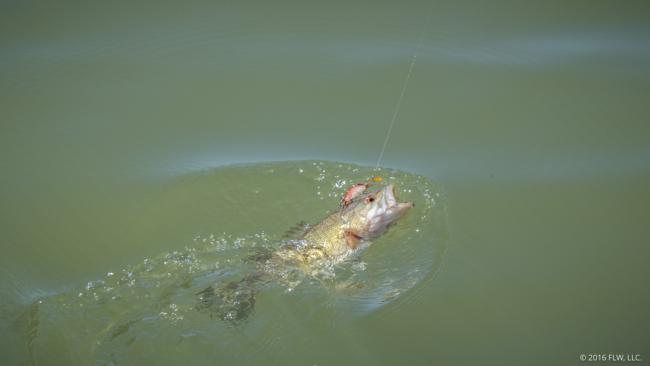 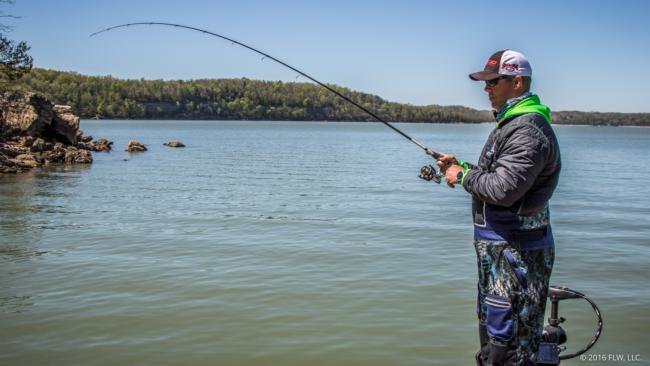 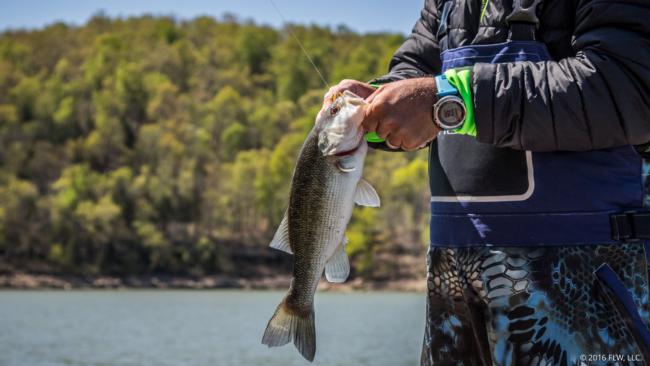 Success at last. After moving to a bank with rock that stair-stepped down rather than cut straight down, Knight connected with a few fish in short order. Though they weren’t giants, the momentum of the day had shifted. His experimental forays of the morning were gone and he was back on track with something to pursue into the afternoon.

Though winning the Forrest Wood Cup is enough of a feat to last a lifetime, Knight still very much wants another big win. Not only to get the feeling of winning again but to solidify his reputation as an angler. He’d like to take the next step, from a pro with a big win to a pro with a history of winning. Depending on how the next few days go for him and the rest of the field, it just might happen. 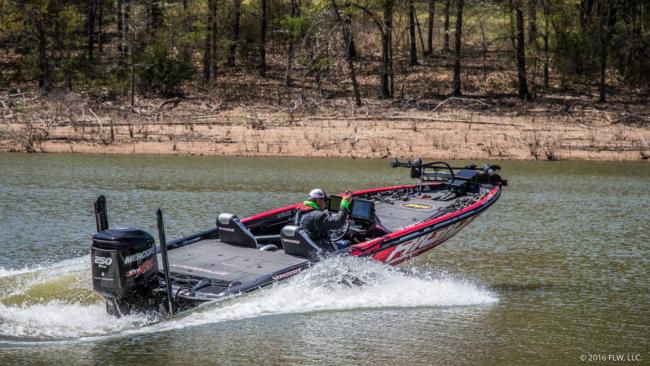 Unfortunately for me, I had to get off the water just as Knight was starting to catch a few. After running me back to the ramp and grabbing his forgotten cell phone from the truck, Knight put the hammer down and headed out for another crack at Beaver Lake.