The day-one weigh-in of the Walmart FLW Tour begins at 2:30 p.m. ET. Click here to watch along live.

Out on the water, the action has slowed a bit. Down here at the marina a couple of largemouths are locked on beds. The sun is high, which makes for perfect sight-fishing conditions, but will anyone unlock a spawning largemouth bite around the lake? Or will spawning smallouths be a bigger factor than expected? Maybe it'll be neither, and schools of offshore bass will steal the spotlight. Join us at 2:30 to find out. 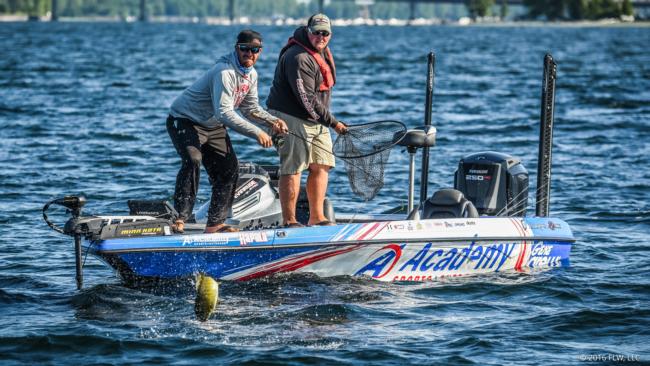 There's a lot of variety in the patterns and locations of the top pros today. Some of that is to do with the size and diversity of Lake Champlain. But also, the fish are still transitioning through their spawn and postspawn phases, so they're kind of everywhere right now.

For the shallows, pros are throwing topwater, swimming jigs and flipping. Out deep, dragging bottom baits seems to be the primary pattern, and both largemouths and smallmouths are being caught this way.

We're an hour from weigh-in. Watch for one final blog post at around 2:15 p.m. Then tune in for FLW Live and watch 'em weigh 'em.

Overall, the fish-catch updates have started to taper off, but not from the top of the standings. Scott Martin just culled up to 22 pounds. By our estimations, that puts him a couple of pounds ahead of Blake Nick.

The wind has changed direction just slightly. The water is still bucking outside the takeoff marina, but some of the more popular fishing areas are pretty calm now. And the sun is shining. It's going to be a beautiful weigh-in with lots of fish to check out. Weigh-in begins at 2:30 p.m. ET.

12 p.m. – All the usual suspects are lighting it up

There doesn't appear to be a lot of surprises coming at weigh-in. Most of the pros near the top of the standings were pre-tournament favorites, including Scott Martin, Jacob Wheeler, David Dudley, Cory Johnston and Bryan Schmitt.

Chris Johnston just checked in with his first report of the day, and, not surprisingly, he's catching them too. He has 18 pounds.

Among the darkhorses catching them is Blake Nick, who just popped a trio of 4-pounders to improve his overall catch to 20 pounds. He's our unofficial runner-up right now. 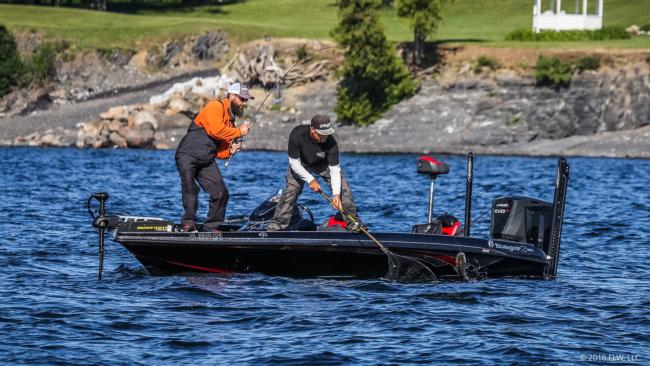 The reports coming in from the water are a little less frequent, but that doesn't mean the fishing has slowed. Some pros have changed strategies to try and target bigger bites. Jacob Wheeler, for instance, has swapped from smallmouths to largemouths to try and improve on his 16-pound limit. The smallies were eager biters this morning; largemouths not so much.

There are definitely still smallmouths on beds, and several pros have sight-fished big brown bass already today for weights that will have them in top-20 cut contention. This is a big lake, so maybe that pattern will last longer than in a typical largemouth-dominated sight-fishing tournament, but we'll have to wait and see.

Tactics remain about the same as before, but more topwaters are coming out, and swimbaits are popular. A couple pros are flipping too. 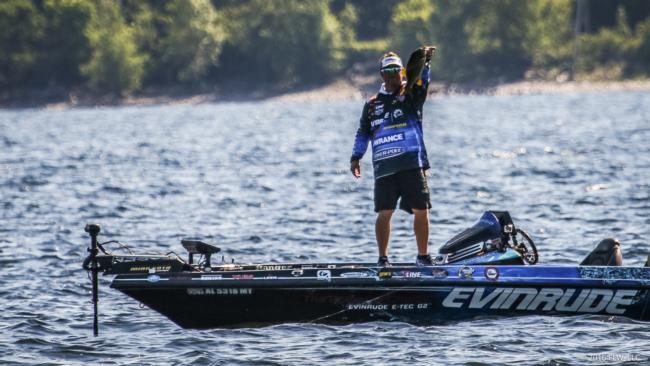 10:15 a.m. – The stars are conducting a hammerfest on Champlain

There's nothing like an old-fashioned slugfest duel of a bass tournament with some of the sports biggest stars trading punches on the water. Right now, the big guns on Tour are putting on a Champlain clinic and setting up an exciting weigh-in with very close weights.

Here's a quick summary of the leaders: 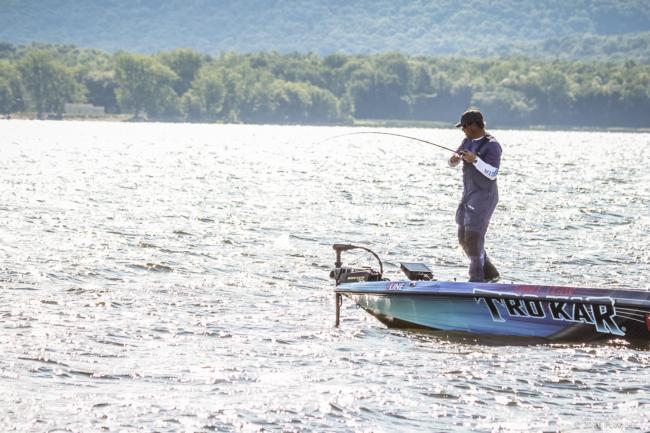 Scott Martin is still in the lead and has improved his limit to about 19 pounds. He's still hanging with a couple other boats and dragging bottom baits.

Jacob Wheeler also culled up. He has about 16 pounds. Last update was that he was headed up to Missisquoi to hang with the rest of the pack there and target largemouths. Missisquoi is a popular place today with at least a dozen pros there. 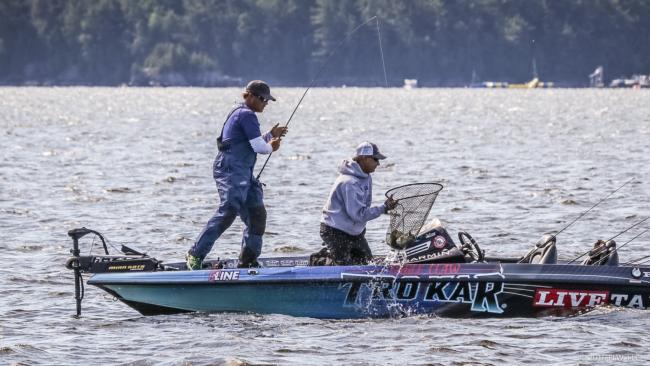 You can never count out Scott Martin. The AOY champ and two-time Champlain winner checks in with 17 pounds just two and a half hours into the day. He's fishing some of the same stuff as he fished in previous Champlain events.

Interestingly, he's fishing really close to David Dudley and Jimmy Reese. Dudley is a former winner here, and Reese has a pretty good limit. So you could say they're on a pretty sweet spot.

Reese is dragging with finesse gear and holding the boat into the wind. Dudley and Martin have 10-foot Power-Poles and are using them to hold in place while fishing with baitcasting gear. It's working. Martin just caught three fish in three casts, while Dudley landed a 2-plus-pounder. 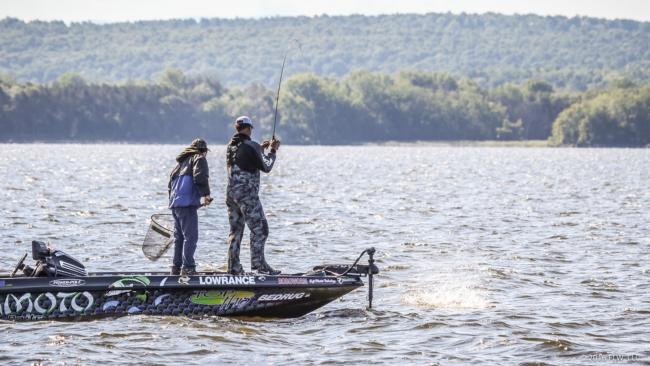 Now there seems to be no shortage of fish catches on Champlain. The updates keep rolling in.

Jacob Wheeler is one to watch. The Indiana pro is reportedly on a good pattern, and he's already landed "two good ones" to go with a couple of smaller fish.

For patterns, add topwater to the list from the previous post. These smallmouths are aggressive, so moving baits such as topwater and jerkbaits can be just the ticket to hammer brown bass.

Most of the action so far has been around reeds in the mouths of bays with swim jigs, twitching Flukes and other soft jerkbaits, or dragging rock piles with bottom baits for smallmouths.

The current unoffical leader is Jonathan Newton, with 15 pounds. Maybe he's found a way to apply his Tennessee River smallmouth knowhow to this big Northern pond. Behind him is Cody Meyer with 13 to 14 pounds. 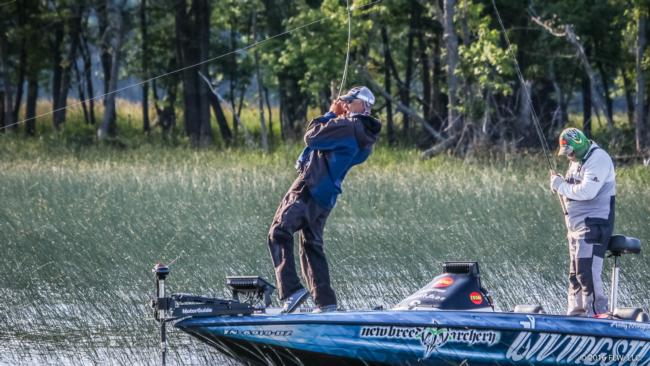 Well, after 90 minutes of fishing on Champlain, it's no slugfest, but it's not really "a grind" either. Mostly, anglers are chipping away at limits with small to medium-sized fish. A couple 3-pounders have been registered, but that's it for real quality bites.

AOY leader Andy Morgan is a limit-catching machine, and he already has five small largemouths. Cody Meyer, on the flip side, has a 13-pound limit of smallmouths. It's great to have choices! 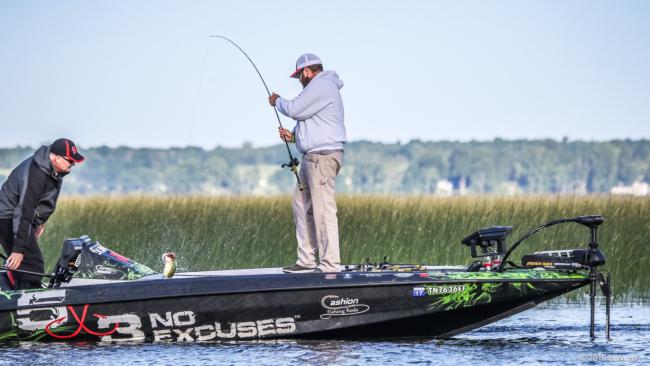 The field really spread out this morning, from northern smallmouth waters to various places down south. Pros are just starting to get to the big-time largemouth waters near Ticonderoga. Michael Neal, Kyle Monti, Brad Knight, Charlie Ingram, Curtis Richardson and Jimmy Reese all rolled into Missisquoi Bay together. Monti was the first to catch a fish. He caught a 3-pounder. 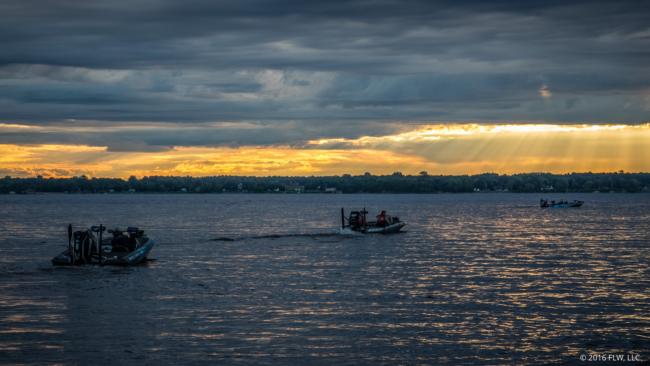 A whole heck of a lot is on the line this week on Lake Champlain at the Walmart FLW Tour finale presented by General Tire and hosted by the City of Plattsburgh and Adirondack Coast Visitors Bureau. The tournament just got crackin’ a few minutes ago out of Plattsburgh, N.Y.

Anglers are in for a beautiful North Country day, with a forecast high of 76 degrees and light winds out of the east. There’s nothing like hoodie weather in June and the prospect of big smallies and big largemouths all in the same pond, but that’s just what Champlain has to offer.

Andy Morgan, the current AOY leader, was boat No. 117 this morning. He needs to hold off previous AOY leader and budding superstar Jeff Sprague, who headed out in the 72nd boat. The race between these two is really too close to predict at this point, and with several other high-power contenders in the hunt, we should be in a for an exciting AOY finale.

Word is that the largemouth bite down south is just a bit off, possibly because of low water and delayed grass growth. That really opens things up this week to anglers who are willing to try the smallmouth bite or explore some lesser-known waters – a real test for anglers who virtually always stake their tournaments on the Ticonderoga area down south.

Expect to see a mix of largemouths and smallmouths. Anglers just trying to hold on to Cup berths will likely punt and chase 12 to 13 pounds of smallies. Anglers gambling on the win will probably focus on largemouths.

For the next four days, the entire field of 160 pros will duel for AOY points and positioning in the standings … and a six-figure payday. You can follow along all week via Twitter and the FLW coverage blog.

Precipitation: little to no chance