Lake Champlain goes down to the wire 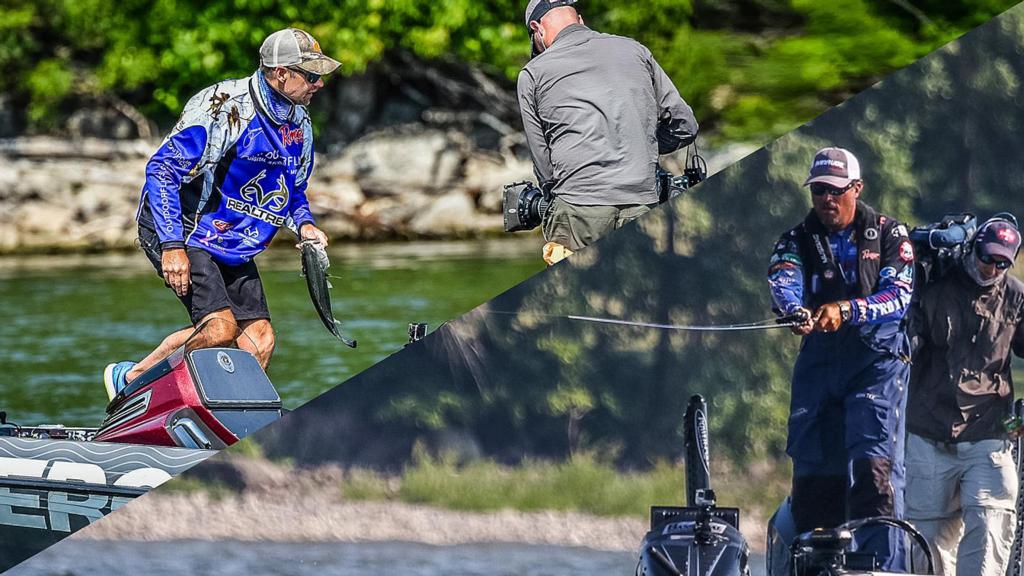 We can't accurately predict a winner, so you'll just have to watch FLW Live at 4 p.m. to find out who'll take the Lake Champlain title. Scott Martin and Jason Meninger are in a dead lock with their weights. FLW's reporters have headed in, and most of the pros are traveling toward check-in. Unless one of the leaders catches a kicker on the last cast, it could come down to ounces at the weigh-in scale.

That said, don't rule out David Dudley or Shin Fukae. Their weight estimates are only estimates, and if they really have a couple pounds more than was reported, either one could have a shot at the win.

Martin didn't put it away today. He has had a solid outing, but the door is definitely open. Whew, prepare yourself for one heck of a weigh-in.

Most of the talk today has been about Jason Meninger and Scott Martin, but Shin Fukae quietly pieced together a solid limit on top-10 day. His marshal estimates it to weigh 19 pounds, but the estimates are almost always a little low. If Shin really has 20-plus, he could challenge both of the favorites. Watch for that at the weigh-in, which begins at 4 p.m. ET and can be watched live on the FLW homepage.

All the pros have to check in at 3 p.m. This final hour will mostly be spent navigating back to the ramp through some pretty stout waves. The fishable minutes are winding down, and with them the 2016 season draws to a close. It's almost time to crown the final tournament champion. 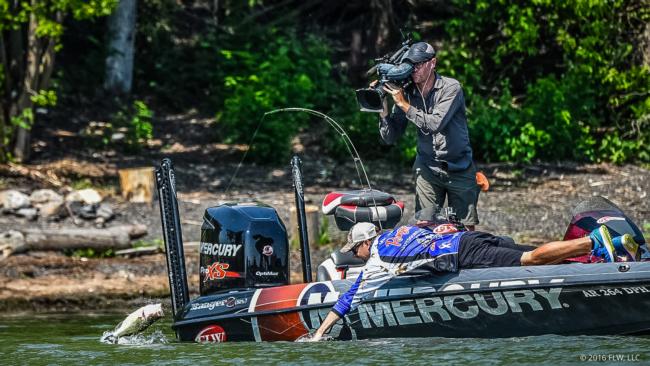 Fishing hours are about over for the three anglers in the top 10 who went to Ticonderoga. That's Chris Johnston, Bryan Schmitt and Jason Meninger. They all said they'd be heading north by 1 p.m. Here's the current list of weight estimates for the entire top 10.

So here's what's up with Scott Martin. He started the day by targeting spawning smallmouths and got some fish in the boat. Then he started working his way toward Missisquoi Bay, hole-hopping as he headed there.

In Missisquoi, Martin revisited the same reef that produced for him on day one, and he shared it for awhile with David Dudley. The reef gave up a 3 1/2-pounder plus allowed him to fill his limit and cull a couple times. We think he has just one smallie still in the livewell.

Now he's on the bank pitching a jig and throwing a vibrating jig. He just caught a 3 1/2-pounder for a nice cull. He should have about 16 pounds.

Meninger has at least 18 pounds, and possibly 19, so this race could be decided by less than a pound. 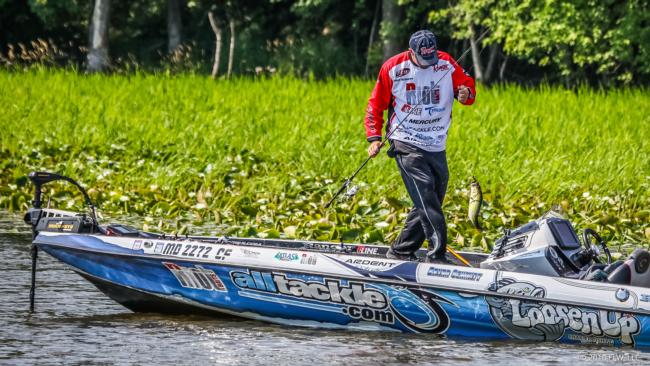 Check-in is at 3 p.m for the top 10 pros, and with this wind, Chris Johnston, Jason Meninger and Bryan Schmitt will have to leave Ticonderoga by 1 p.m. to make it back in time. That's a huge advantage for Scott Martin, who's fishing up north and has a much shorter, yet still bumpy ride back to the marina.

The last hour or so of competition has been a small-fish fest. David Dudley has caught a dozen keepers that didn't help him at all. Austin Felix probably has thrown back six keepers. Meninger has thrown some back too.

A big fish or two could be huge in the last few hours of fishing. 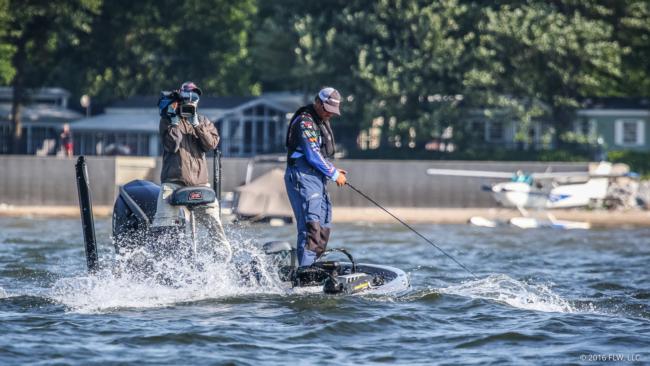 With four hours left to fish, here are the current weight estimates:

Jason Meninger is having a day. He's reporting 16 1/2 pounds, but fellow pro Barry Wilson is serving as Meninger's marshal today, and Wilson says that Meninger might have even more than that. His smallest is 2 3/4 pounds.

According to Wilson, Meninger is switching up between a wacky-rigged finesse worm and a Texas-rigged beaver-style bait or 7-inch straight-tail worm.

"He’s just staying in one area and fishing dock pilings in shallow water," says Wilson. "He’s being very precise. He'll pole down and switch baits and cast to the same area eight or nine times, and, bam, catch a 4-pounder. He hasn’t moved 100 yards, just going back and forth. He's also fishing some places that have hydrilla clumps and a rock point."

Even if Meninger only has 16 1/2 pounds, Scott Martin has about 13, so the two are practically tied right now. Martin was 2-11 ahead coming into the day.

VIDEO: Tom Redington breaks down the impact of the wind on day four 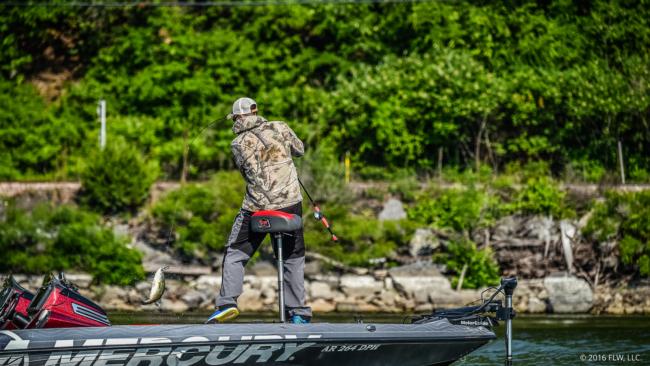 David Dudley got a good look at Scott Martin landing his fifth keeper, a 2-pounder that ate a crankbait, because the two are sharing a spot. Dudley moved out in front of Martin a little bit, so they might be doing a little jockeying for the sweet spot. Martin has about 12 pounds, but so does Dudley.

Jason Meninger is up to 12 pounds too, but he's fishing down in Ticonderoga. Bryan Schmitt, who's also south, can't seem to get anything going. He hasn't landed a keeper yet. 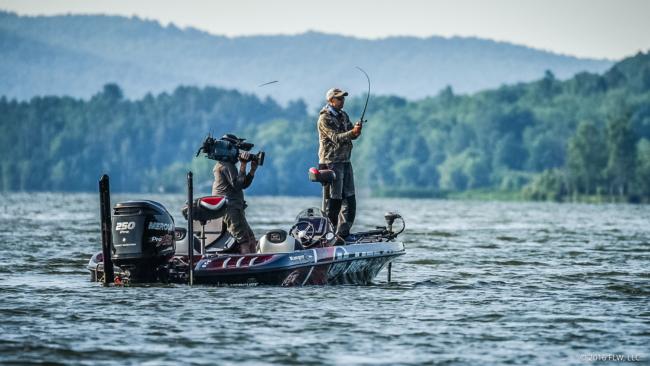 9 a.m. – The wind is making it tough; slow bite overall

That along with the fishing pressure from three previous competition days has made the bite a little bit tougher. The top 10 pros are catching fish, just not at the pace they set yesterday.

Here are the early estimates:

8 a.m. – The wind and waves are making it interesting

Looks like the weatherman was right for the first time in his life. The wind has picked up on Lake Champlain, and it's pretty bouncy out there. One FLW reporter on the north end of the lake called it a good "walleye chop" and says it's full-contact photography out there. He's watching David Dudley sight-fishing in 2- to 3-foot rollers. Down south in Ticonderoga, Bryan Schmitt, Chris Johnston and Jason Meninger have gone to work. They'll probably need to head back early because of the waves. It's definitely a factor today.

So far, Stetson Blaylock, Shin Fukae and Dudley have limits. Several others have keepers in the boat. 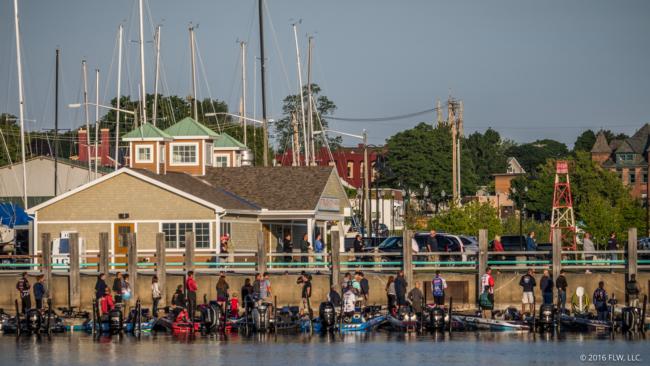 7 a.m. – The wind is moderate for the run to Ti, but it's supposed to build

In Lake Champlain tournaments out of Plattsburgh, the run to Ticonderoga is always a gamble. The lake is huge, and even a moderate wind can build some pretty impressive waves. Plus, it's just a long haul down there.

Both Jason Meninger and Bryan Schmitt are staking their tournament on the Ticonderoga area, and both have a shot to catch Scott Martin, who's fishing north. Plus, Chris Johnston is running south today to swing for the fences. Any of the three Ti guys could catch a 20-plus-pound bag and move up the standings.

The catch is that, while the pros launched to light SSE wind, the gusts are supposed to pick up throughout the day. It could be a rough ride home.

Wind: SSE at 4 mph and building