How the top finishers at Wheeler Lake got it done 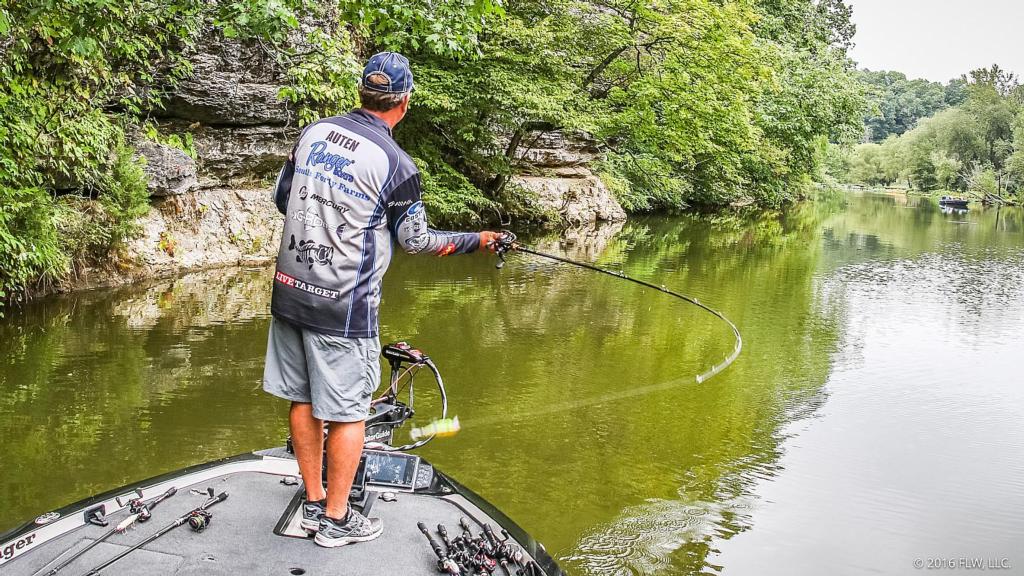 John Cox of Debary, Fla., outfoxed 49 other competitors in the 2016 Forrest Wood Cup presented by Walmart at Wheeler Lake by running his aluminum boat far back in Cotaco Creek to tap into a population of resident bass that few others could reach. His efforts earned him $300,000 and a Forrest Wood Cup for his trophy case.

Cox’s back-of-the-creek strategy was one of two effective patterns utilized on Wheeler during Cup week. The other dominant player in the event was targeting schooling fish. Here is a breakdown of how the second- through 10th-place finishers fished at the 2016 Forrest Wood Cup. 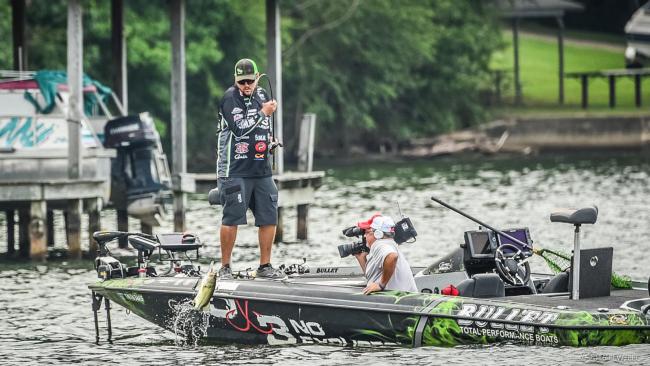 2. Neal waited out schoolers in one spot

Michael Neal of Dayton, Tenn., finished runner-up in the 2016 Forrest Wood Cup by spending the better part of four days waiting on schoolers in one spot – not an area – but literally one 30-yard-long pea gravel bar located on the main lake. In all, Neal pulled the majority of his 50 pounds, 10 ounces off this single spot.

It’s safe to say that Neal used his trolling motor less than anyone else in the Cup over four days as he Power-Poled down in the spot and just waited … and waited … for hours for the fish to come up breaking.

“It was pointless to chase them around on the trolling motor and cast randomly at them,” Neal says. “It was far more effective to just sit still, be quiet and just wait for them to surface within casting distance.”

Many times Neal fished by not fishing at all. He would stand on the deck with the button on his reel pushed, waiting for the school to erupt. The goal was to land his topwater right on the very spot where a fish was breaking the surface.

“You had to land right on the fish’s boil or it wouldn’t bite it,” Neal says. “It was a maddening way to fish, but it was my best chance at catching quality fish. There were some bigger bass in there schooling with the small ones. The small ones would school on small bait, and occasionally the big bass would school on much bigger 5- to 6-inch shad. If I could land just one or two casts per day in those bigger breaking fish, it was worth it.”

Neal says he rotated through three different walking baits all week, but the biggest key to all of them was to put a feathered hook on the back.

“I started using a feather on my hook the second day, and it made a difference in the number of bites I got in those schools,” Neal says. “I don’t know what it is about that feather, but it works in schooling fish.”

When the schools went dead for a while, Neal would drag a Carolina-rigged Big Bite Baits Finesse Worm under them. If he could hook up, it sometimes fired the school back up and got them surfacing again. 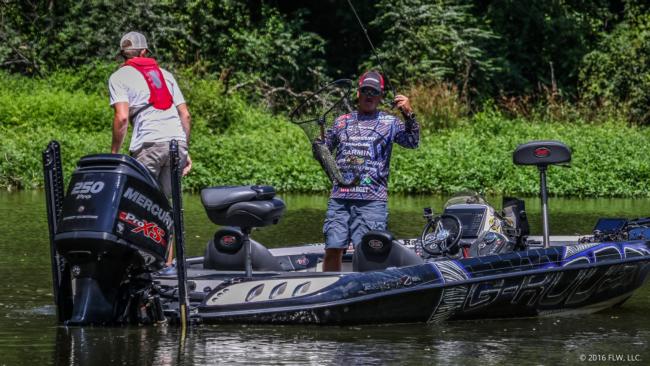 In his sixth trip to the Forrest Wood Cup, Todd Auten of Lake Wylie, S.C., posted his best finish at Wheeler, ending up in the third spot with a four-day total of 50 pounds, 5 ounces.

Auten has a shallow-based fishing style, opting for quality over quantity, and that trend showed in his scorecard for the week. He caught four bass the first day and only three bass the last day, but on the two days that he connected with a limit, he weighed in 14 pounds, 6 ounces and 17 pounds, 10 ounces, respectively, which put him in striking distance of winning the Cup going into the last day.

Auten did spend some time fishing for schoolers during the week, but the majority of his time was spent in Second Creek and the Elk River fishing shallow with buzzbaits, jigs and ChatterBaits.

His impressive 17-10 bag on day three was the result of weather, according to Auten.

“Every day of the Cup dawned sunny, hot and slick, except for day three,” Auten says. “That morning a little front pushed through, causing a few storms, overcast and wind. And I really believe that’s what triggered those big fish to bite that day. I fished that same area other days, and it just didn’t produce much compared to the third day.” 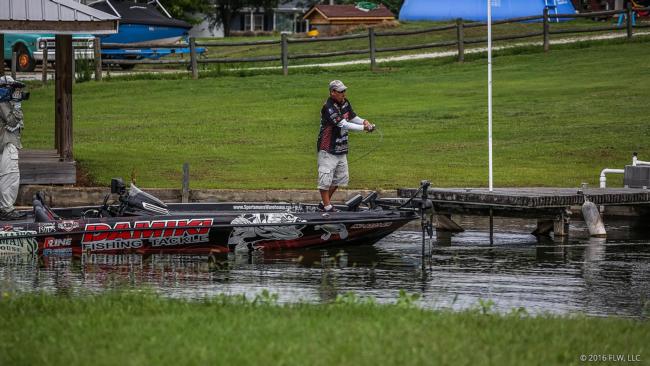 4. Thrift runs and guns for fourth

Bryan Thrift of Shelby, N.C., has been to the Forrest Wood Cup 10 times and has eight top 10s to show for it, including his most recent fourth-place finish at Wheeler Lake.

Thrift once again applied his run-and-gun style at the Cup.

“I caught them from Ditto to the [Wheeler] dam, and from 8 inches to 8 feet,” Thrift says. “To me, fish in the summer are going to stay in one spot. Where they are now is where they’re going to be until the first cold front cools things off. So if I have a place where I can get a bite, I’m going to go throw at it every day. And that’s what I did. I had about 25 spots and places where I had a bite, and I ran most of them every day.”

Thrift says a lot of his 49 pounds, 6 ounces during the week came on a Damiki D Pop 70 in a color called spayu. He tied the popper to 12-pound-test P-Line monofilament and fished it on his signature series Fitzgerald Rods 6-foot, 3-inch topwater rod.

His other key baits included jigs, swimbaits and shaky heads. 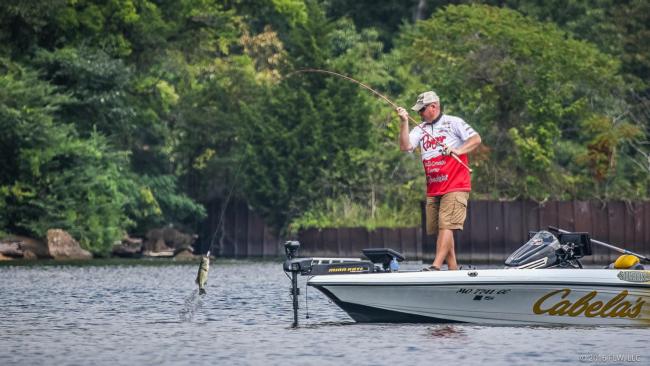 Jeremy Lawyer, the 2016 FLW Bass Fishing League All-American winner from Sarcoxie, Mo., made a fifth-place showing in his first Forrest Wood Cup with a four-day total of 49 pounds, 5 ounces.

Lawyer spent the majority of his four days tied to schooling areas near Wheeler Dam. He caught schoolers in a conventional topwater fashion, using a Yellow Magic popper that was custom-painted by Fall Creek Lures in a color Lawyer calls “Forrest Wood Cup shad.”

Interestingly, though, Lawyer also caught some quality schoolers on a 1/2-ounce slab metal spoon (white) by throwing it out, letting it go to the bottom and then ripping it up off the bottom. Also, he boated one of the biggest fish of the week by cranking a LIVETARGET BaitBall Threadfin Shad TDD-70 through the schools.

“When the fish would go down, I needed something to throw that might produce a reaction bite,” Lawyer says. “So I used a spoon and crankbait to rip through them after they went down, and both scored some key fish for me during the week.”

Once Lawyer left the lower end of the lake to return to Ditto Landing, he hit a couple of river banks, pitching a Reaction Innovations Smallie Beaver on a 3/8-ounce weight to shaded banks with current. He picked up a couple of key 4-pounders this way as well. 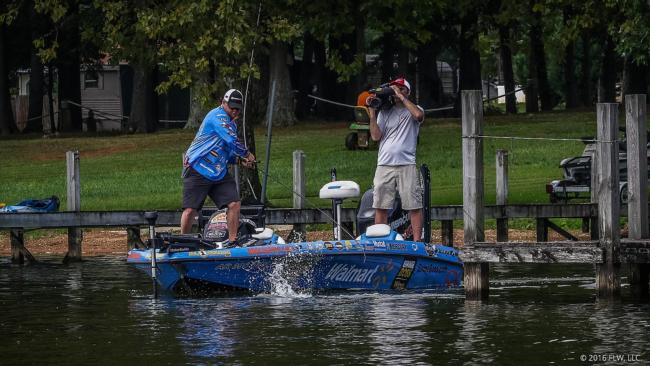 Given his Tennessee River ledge-fishing reputation in the summertime, Mark Rose was a huge favorite going into the 2016 Forrest Wood Cup on Wheeler Lake in August. And Rose did not disappoint, posting a sixth-place finish in the event with a four-day total of 47 pounds, 15 ounces. But the way he caught his fish was a bit surprising.

“I fished shallow for a lot of the week,” Rose says. “I could see them [with electronics] out deep, but I just could not get them to bite. I tried fishing deep a little bit during the event to keep them honest, but I mostly stayed on the bank in the mornings and then fished a few brush piles in the afternoons.”

For his shallow fish, Rose opted for a buzzbait with a toad.

“I had one shallow gravel bar where I could catch a good smallmouth or two every morning on a buzzbait,” he adds.

After that, Rose ran shallow creeks and sampled brush piles with a Strike King Bull Worm (plum apple) Texas-rigged with a 3/8-ounce weight and tied to 17-pound-test Seaguar fluorocarbon to fill out him limits. 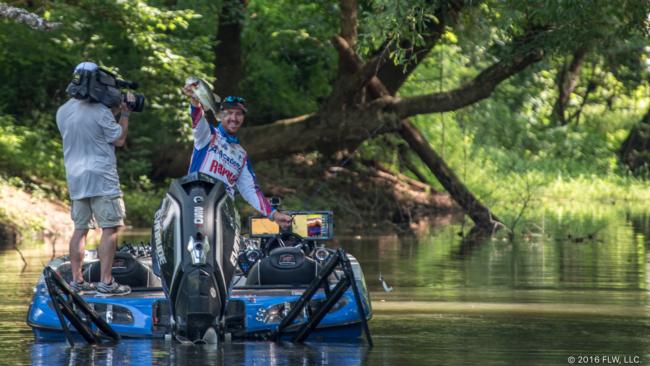 Wheeler says he went “creek fishing” for the week, pitching jigs and creature baits to overhanging trees, shade, laydowns and undercut banks in the very back ends of small tributaries.

Wheeler says he was very “non-committal” in his areas, choosing to run in and out of a lot of different creeks each day instead of setting up camp in just one or two like Cox did.

“Being able to run in and out of the creeks on plane was part of my plan,” he says. “I didn’t want to waste time idling, so I marked safe routes into six or seven creeks and ran them each day.”

Once in the creeks, Wheeler hit his key targets with a 9/16-ounce E.R. jig (magic craw swirl) teamed with a Gene Larew Punch Out Craw (Minnesota flash) tied to 17-pound-test Sufix fluorocarbon.

He also covered water in the creeks with an Accent Game Changer Buzzbait teamed with a toad and a black frog. 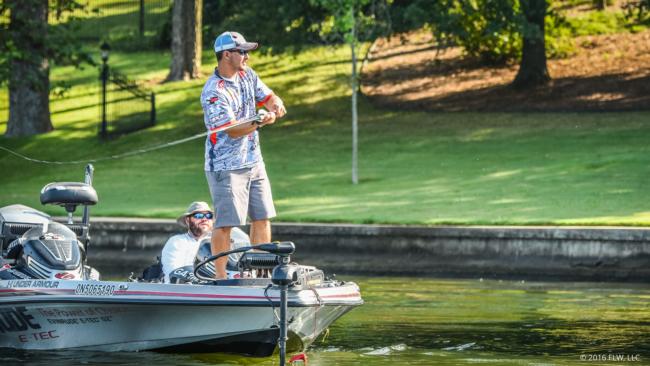 FLW Tour Rookie of the Year Chris Johnston of Ontario turned in an eighth-place finish in his first Forrest Wood Cup appearance with a total of 44 pounds, 8 ounces.

Johnston got in on the schooling game at Wheeler, chasing breaking fish with an Evergreen SB-105 (American shad) tied to 20-pound-test PowerPro braided line. 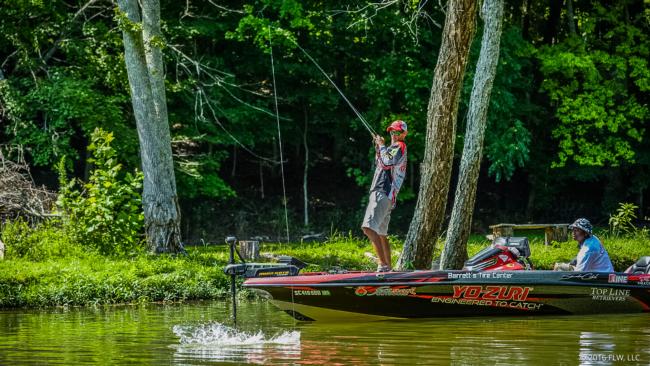 Brandon Cobb of Greenwood, S.C., has been to the Forrest Wood Cup two years in a row and scored a top 10 both times. He finished ninth at Wheeler this time around with a total of 44 pounds, 4 ounces.

Cobb caught the majority of his weight during the week from what he believes was a spring outflow hidden by an undercut bank on the main lake.

“This was just a small little pocket in the bank, under some overhanging trees,” Cobb says. “It was only about a foot and a half deep, but the water coming out of it was clear and about four degrees colder than the main lake.”

Cobb caught all of his fish the first two and a half days from the small spring area, pitching a 1/2-ounce Greenfish Tackle jig and a Zoom Baby Brush Hog to the bank with a 7-foot, 4-inch Falcon Cara heavy-action rod. He also mixed in a Zoom Z3 Original Worm on a drop-shot to squeeze a few more keepers from the area each day.

TBF champion Joseph Webster of Fulton, Miss., rounded out the top 10 at the Forrest Wood Cup with a total of 42 pounds, 3 ounces.

Webster played a one-two combo on Wheeler by chasing schoolers in the mornings to start his limit and then cranking deeper areas in the afternoons to score a quality keeper or two to bolster his weight.

In the afternoons, he ground a Norman DD22 (citrus shad) across deep humps and ledges in the lower end of the lake for a reaction bite.

“The fish were just not bunched up real well out deep during the event,” Webster says. “There were small groups of maybe five or six fish down there, and if I hit one just right I could catch maybe one or two out of them.”