On Norman with Bryan Thrift

The second day of practice with the best local favorite ever 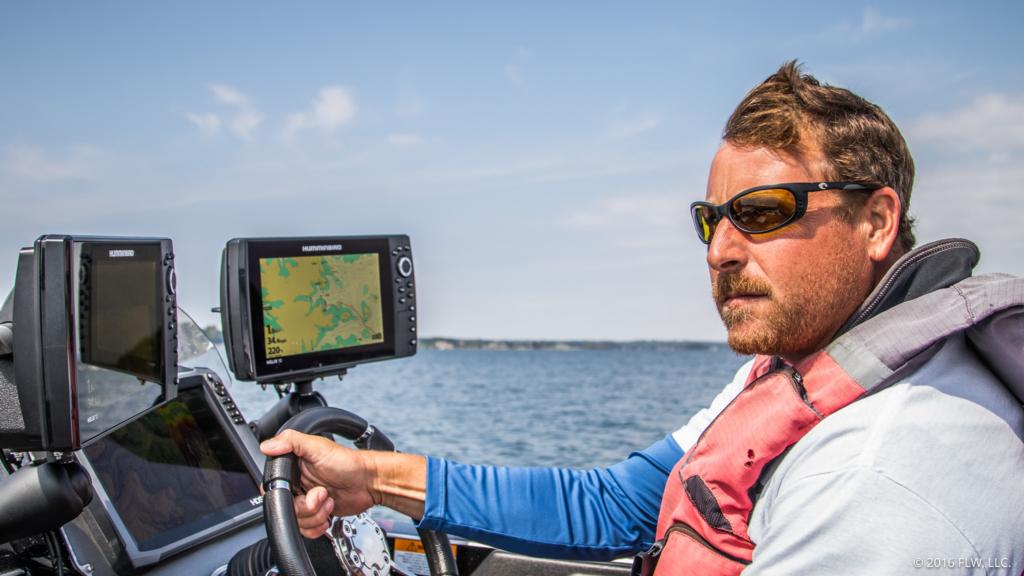 Bryan Thrift has finished in the top eight in the Walmart FLW Tour Angler of the Year standings in eight of the 10 years he has fished as a pro, and the Shelby, N.C., angler notched a Tour win on Lake Norman in 2010. As favorites go, Thrift is a strong one heading into this week’s Walmart FLW Tour Invitational presented by Lowrance at Norman. That in mind, we hopped in the boat with the man who’s fast becoming a legend in his own time for a half day of scouting on the second day of practice for this week’s Invitational showdown. 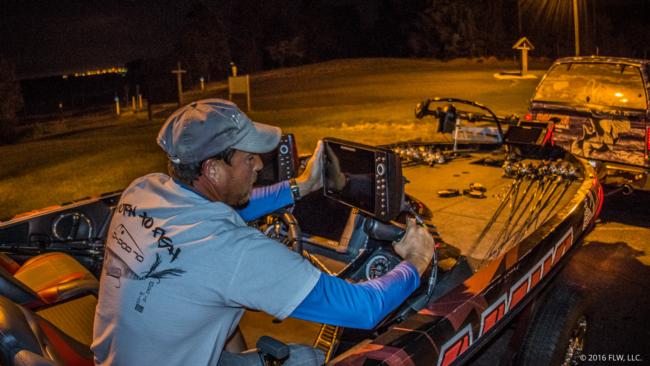 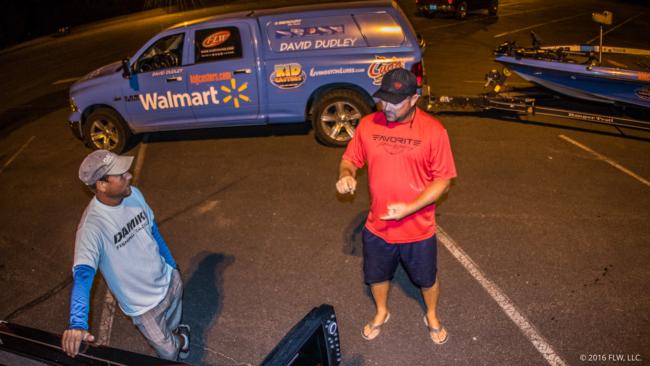 I meet Thrift in the pitch dark at Beatties Ford Access, located on the southwest side of Lake Norman and just a bit more than an hour away from Thrift’s home. He’s eager to start early and quickly and meticulously mounts his electronics just how he likes them, unloads a slew of combos from the front seat of his truck, straps them down on the deck of his Ranger and tosses the remnants of a breakfast burrito and a few tins of canned salmon into the cooler. Just as Thrift is ready to roll, David Dudley rolls up to the ramp. They chat a bit to chase away the dark before backing their boats into the water. Thrift ferries Dudley out to his boat and then strikes out into semi-darkness on the choppy lake. 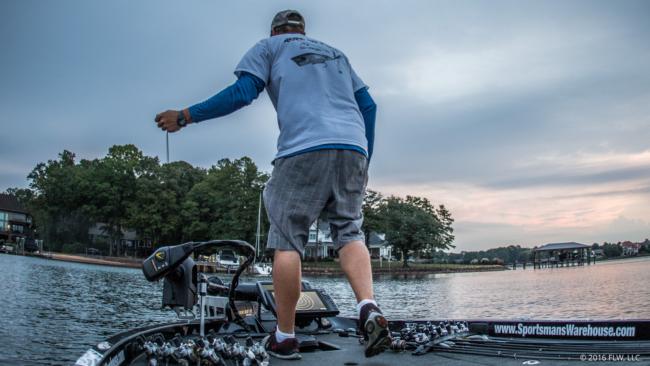 Located not far from Charlotte, N.C., Lake Norman is a heavily populated lake, and the vast majority of the shoreline is studded with homes that range from very grand to very modest. Thrift’s first stop is at one of the lake’s innumerable docks.

He tosses a topwater bait around the edges of a few docks before cranking up and moving out to the point of the pocket for a few more casts. Within 15 minutes, Thrift has cranked up his Evinrude two more times and been at another 10 or so different docks. As the sun finally starts to get up on an overcast morning, the early hunt for a topwater bite has paid off with a few little blowups, but so far nothing that appears substantial. 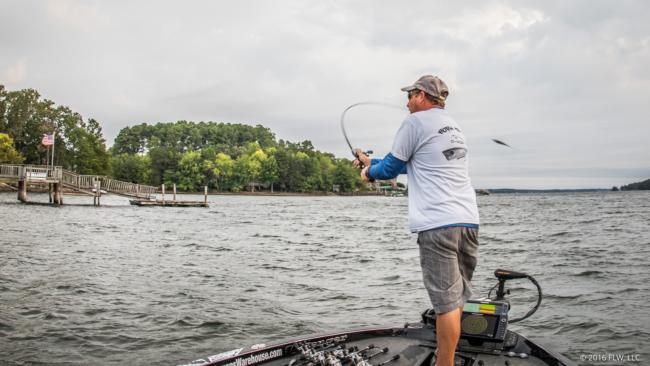 Still fishing in a wind that makes it feel like fall, Thrift shelves the topwater a few stops later in favor of a swimbait. His theory is that the wind and clouds should be perfect for a topwater or moving bait bite, but that’s not exactly happening for him early. Most of the docks Thrift targets have a dredged-out section around them where the water is much deeper than the regular bank. Though it looks great, the scenario around the docks could be better if the water was a bit lower, says Thrift. Regardless, there’s no doubt that the docks have failed to produce numbers or quality so far. 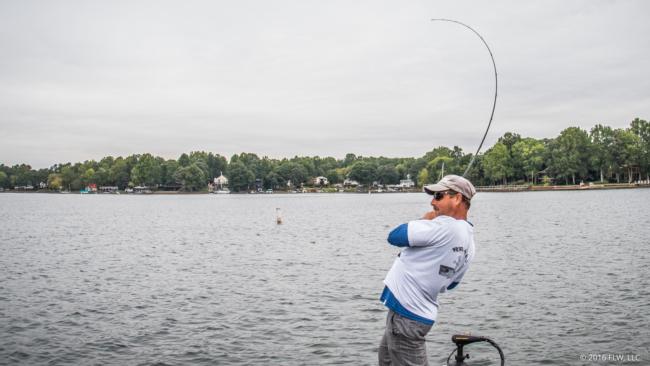 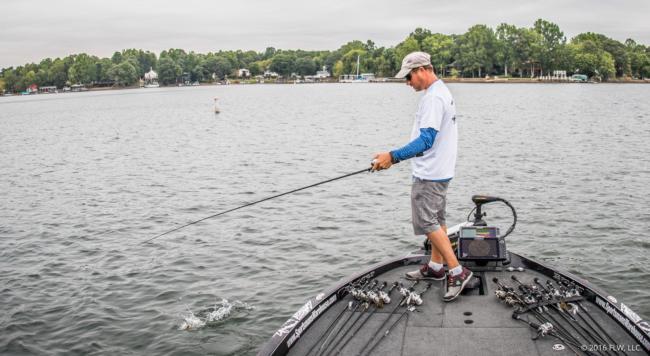 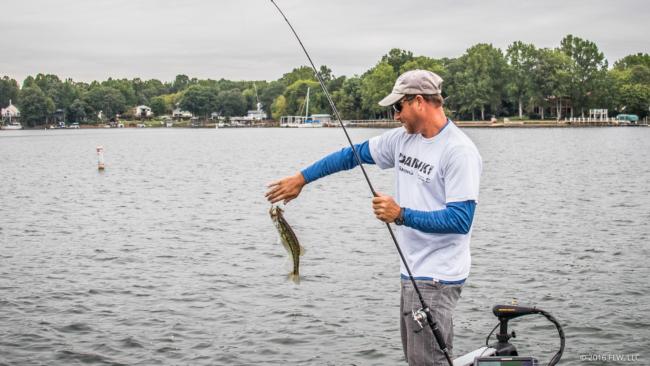 After another quick move, Thrift pulls out a jig and homes in on a dock that he knows has some brush nearby. Fishing brush near docks is a time-honored tradition in the Carolinas, and it pays off quickly now. In short order, Thrift sets the hook on a keeper and then another. Swinging a 3-pounder in the boat, he says, “I knew I shouldn’t have set the hook on that one,” before vowing not to set on any more bass in the brush. 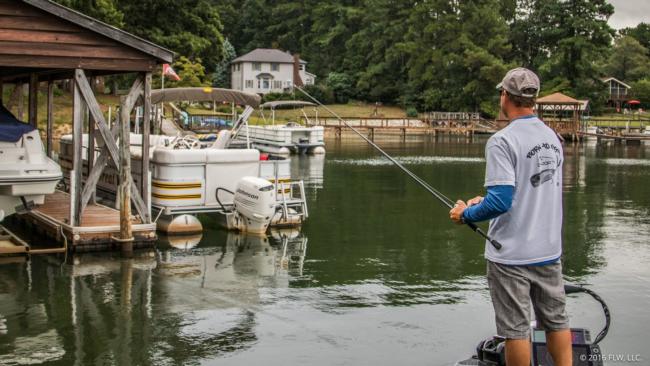 After another stop on some brush, Thrift turns his attention to a dock pattern and slows down just a little.

“A lot of times on this lake I spin myself out,” says Thrift, who fishes plenty of local derbies on Norman. “There are so many fish here that when I don’t get a bite for a while I forget you only have to catch five.”

He continues moving through a broad selection of docks, fishing a little known brush, but often just tossing his jig up to the dock and hopping or swimming it out. After hitting a couple more stretches in a cove, Thrift picks up and runs to a section of the lake he’s literally never been in before. 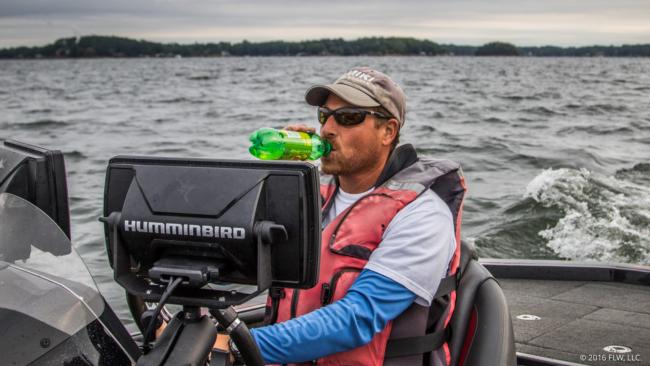 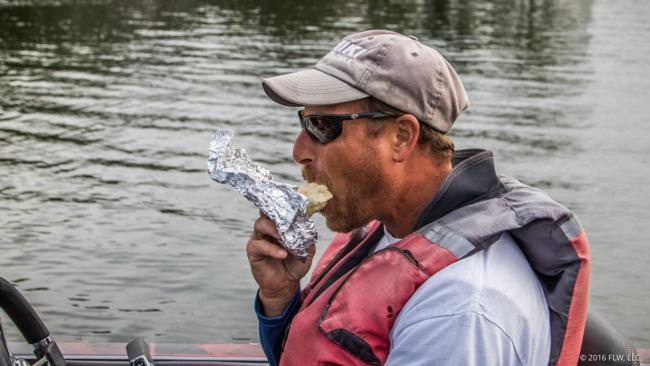 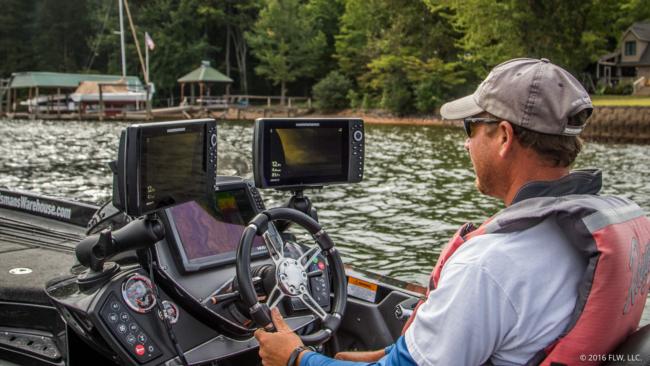 Thrift grabs a drink before starting in on the remnants of his breakfast burrito while idling down the middle of an arm. Though not known as an offshore expert, Thrift has added that to his game in recent years, and he’s now about as complete a pro as you can find. He makes use of three units, with two of them set to scan to the sides and a Lowrance in the middle set with Navionics and sonar. Set as he is, Thrift can scan nearly the entire width of a small creek in one shot, and no brush pile or rock pile is safe.

After noting a few willow bushes that he might hit on a spring day with higher water, Thrift idles back out of the creek and stops on a rocky point he marked coming in. A few quick flings with a single swimbait and he’s eliminated some water and is on to test out another area. 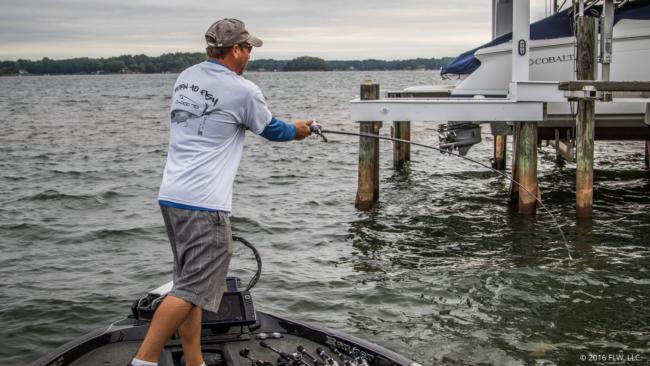 The next stop is a dock he noted in pre-practice. Almost as a matter of course, he gets bit within a few casts. After making a few more throws to see if there are any other takers, Thrift bounces to another couple of docks and then cranks up and begins to run a few waypoints.

There are remarkably few waypoints on Thrift’s GPS unit, and it appears that he doesn’t really need them. Thrift says he pretty much only uses waypoints offshore and just remembers everything else. Based on the accuracy of his casts to dock-related brush, his memory is as sharp as his aim. He’s firing around at some brush that he marked in pre-practice when he connects on a few more small bass but fails to run into anything of much consequence. 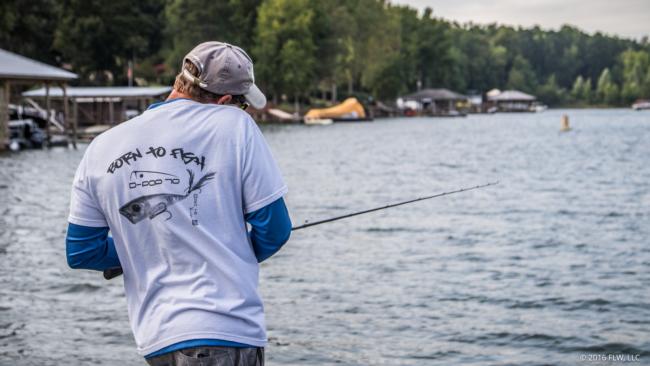 Thrift stays active on his phone throughout the morning. Sometimes he chats with a contractor for concrete or landscaping at his new house (“I need to win this thing. Then I’ll just call Mark and have him sod the whole yard,” he says.). Other times he fields calls from his wife, Allison, and wishes his young son, Wiley, a good day at school. And once he gets a breakdown of the day from fellow favorite Shane LeHew. 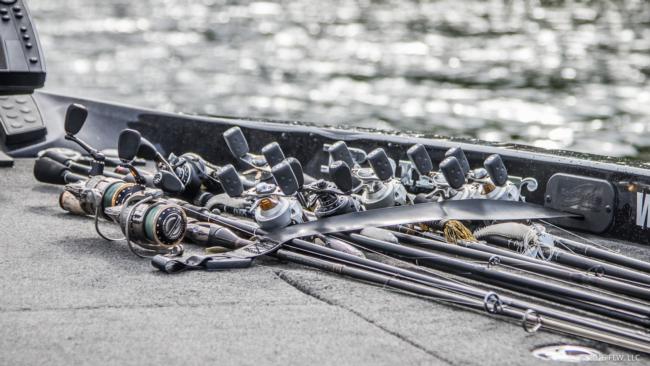 Thrift has about 20 rods ready to go with a far-ranging variety of baits. From swimbaits to ChatterBaits, drop-shot rigs and topwater, he’s ready for anything. 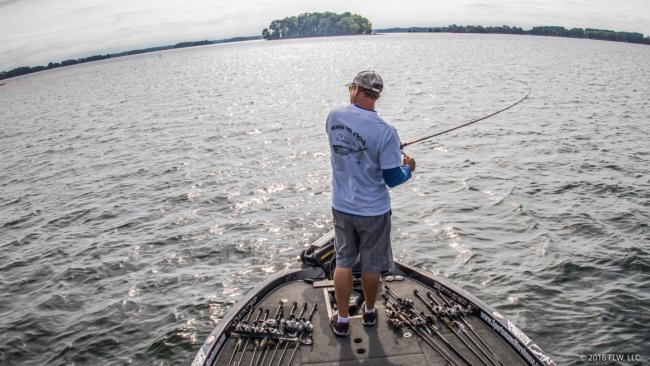 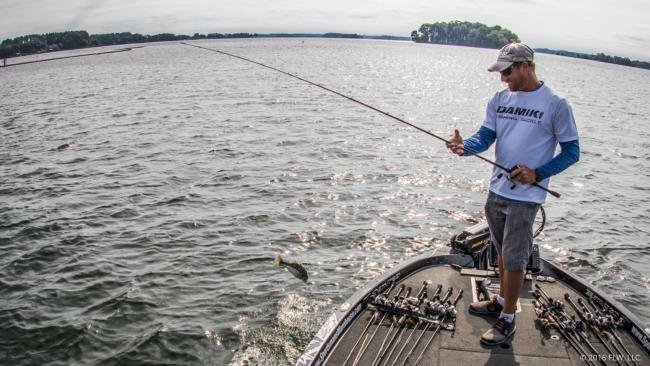 As the sun finally begins to break through the clouds around 10:30, we move again. Thrift pulls up on an offshore waypoint for a few casts, carefully idling in and lining up his boat before stopping to cast. Seconds later, he’s up on the front deck making a dead-on cast and reeling another spotted bass toward the boat. 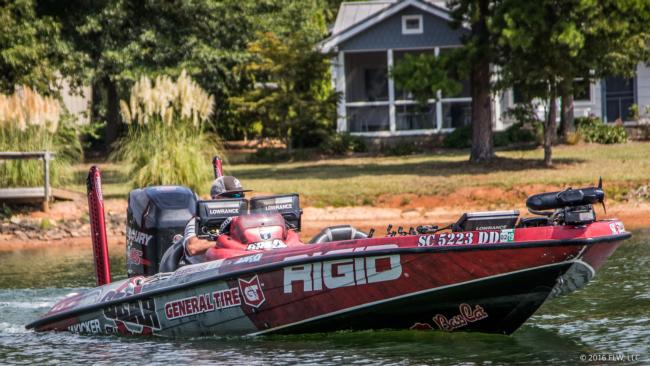 A high percentage of Thrift’s waypoints and the areas he’s fished based on past knowledge have produced already, so the pro decides it’s time to go looking. He moves to a new part of the lake where we run into Britt Myers, who is maybe the second or third tournament angler we’ve seen all day. After a brief chat in which Thrift agrees that the fishing is slower today than on Sunday, the anglers part ways and Thrift goes back to scanning creeks and points in search of new brush and rock that might hold some bass. 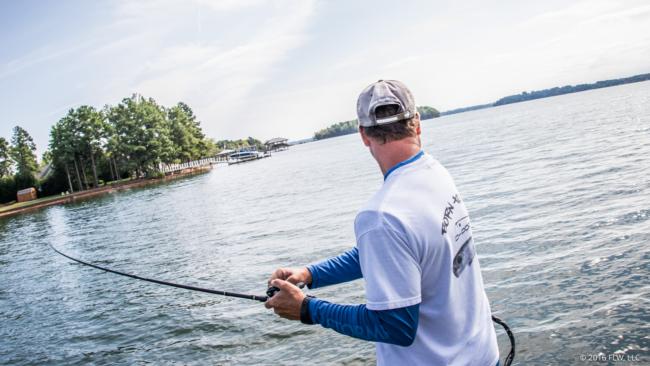 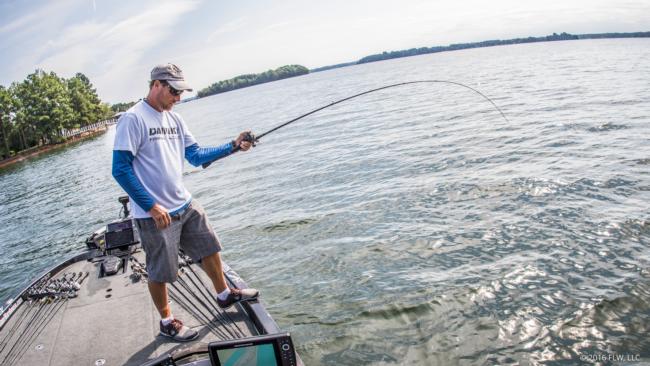 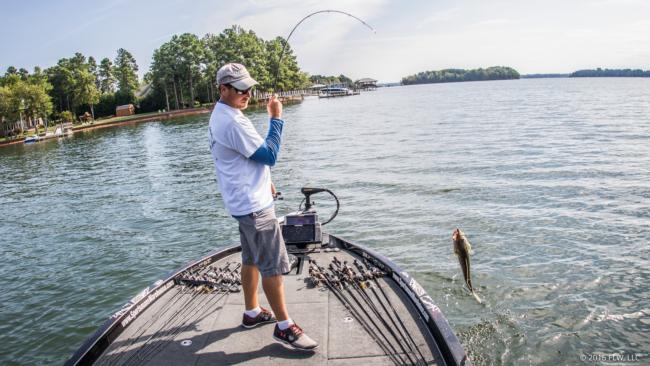 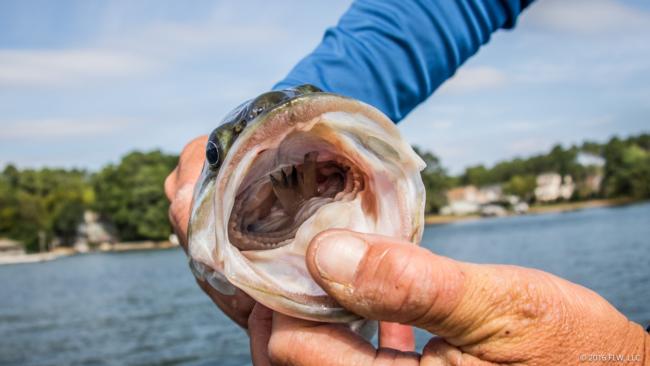 A little later, Thrift is successful again, stopping on a newly discovered underwater pond dam and setting the hook into another chunky Lake Norman spotted bass, this one coming with a clue as to what size shad it has been eating. 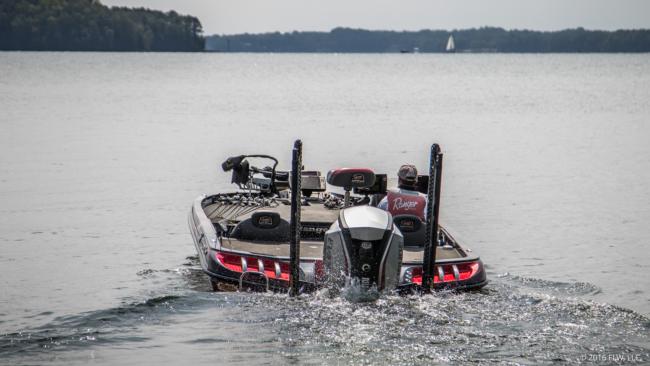 After another half-hour of idling mostly fresh water, Thrift takes me back to the dock and rolls back out. Armed with as much knowledge of Norman as anyone, plus a whole lot of skill, he seems relaxed and well positioned for another successful event. Nonetheless, he’s not about to take it easy because he’s close to home, and he intends to use all the time he’s allowed to keep the pressure on the competition.