It’s about time to weigh some bass! 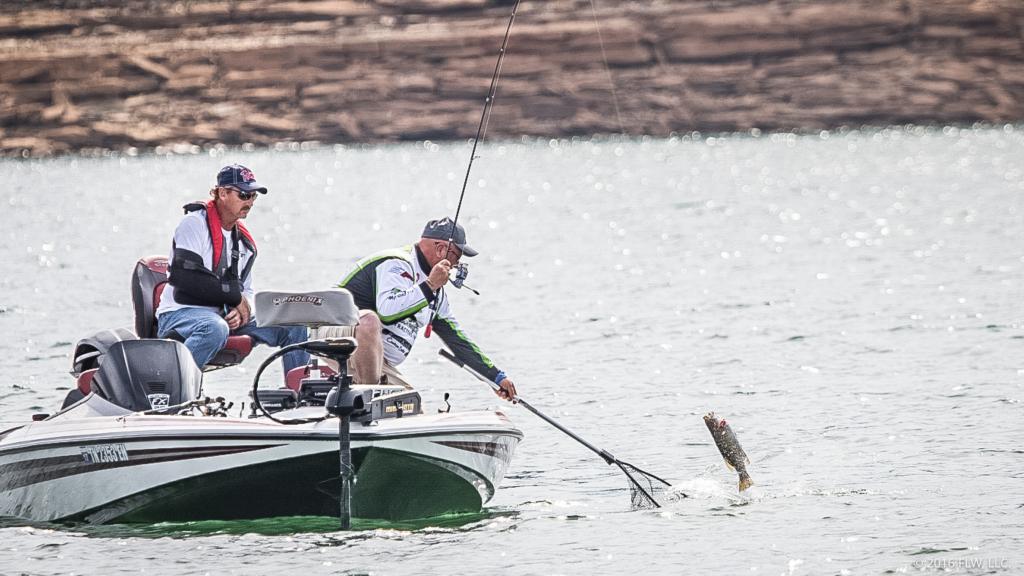 How the lake lays out

We’re 30 minutes from weigh-in with not a lot new to report. Matt Arey has filled his limit, but otherwise it’s been slim pickings in the final minutes. All that means we’re headed for a wicked tight weigh-in and that tomorrow could be anyone’s game. So get on out to Anderson County Park or flwfishing.com at 3 p.m. to see some beauty smallmouth and find out who takes the lead on day one!

It’s crunch time. Weigh-in starts at 3 p.m. ET and there are plenty of pros well shy of a limit. For any of them a keeper would go a really long way. Even for some in the top 10, a keeper or two would make a big difference. Because of the service on Norris, it’s likely that we’re missing updates from some pros, but even so, as the day winds down, the fishing looks to have been pretty tough.

Out on the Loyston Sea, the wind is rolling pretty good and has folks optimistic. Around takeoff, it’s easy to hear the whine of an outboard – pros are moving and grooving looking for that final bite or two to finish off the day. 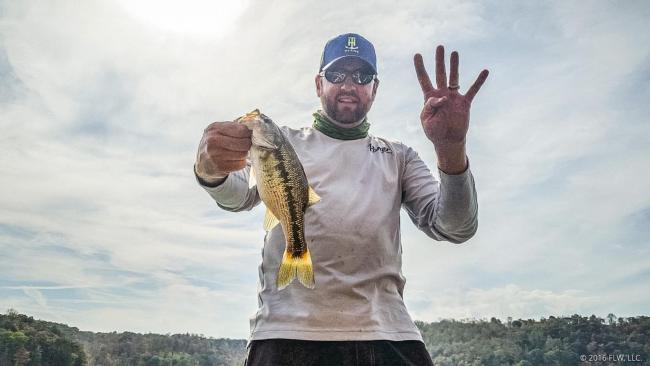 You might have noticed that the fishing on Norris hasn’t exactly been gangbusters today. Heck, Brandon Card doesn’t have any fish – if there’s any indication of how tough it is that oughta do it. Nonetheless, things might be turning on as the afternoon wears on. In practice, Todd Hollowell had one stellar afternoon, and there have been plenty of instances when the last minutes are the most key. Just recently, Sam Smith, Bill Dunn, Chris Gerrein, Luke Dunkin, Nick LeBrun and Trevor Windgassen have all boxed keepers. If the bite picks up around the lake, we could be in for an interesting afternoon.

David Williams is crushing it today. He just culled up with a 3-pound smallie and is probably up to about 14 pounds. That puts him at least a pound ahead of second (either Lambert, Watson or Hollowell) and really marks him as the only pro to catch any kinds of solid numbers all day.

David Williams has had a pretty good day so far. He’s unofficially in third with about 11 pounds, but he says he has around 12 pounds, which might put him in the lead. Regardless, he just threw back a keeper that wouldn’t help him and is one of just three pros with a limit. Williams started his day in a marina and says that he has had a couple 5-pounders either on or almost commit to his bait. If he had managed to get even one of them in he’d be having a transcendent day. Now, he’s left his marina and is running a gravel bank with a little wind and a spinnerbait.

Going into the event, Michael Milton was one of the most talked-about locals. A tournament veteran who’s won a lot on Norris this year alone, he’s got a reputation as one who understands the ways of the smallmouths in Norris. Today, he’s sitting on a goose egg so far. He says the water temperature is off from what he’d like it to be, but if he can’t catch brown ones, that should signal that it will be tough on anyone looking for smallmouths. Nonetheless, he's still chosen to chase smallmouth, and caught two shorts a little while ago on a grub from more than 50 feet of water. 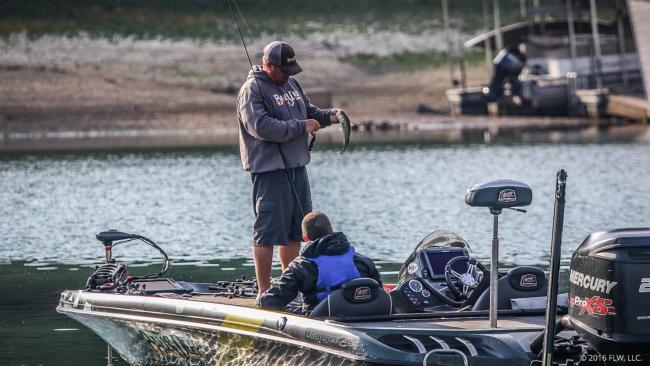 James Watson is off to a solid start for sure. He’s got more than 11 pounds in the boat and should be feeling right at home. Todd Hollowell comped Norris to Beaver Lake and if Watson is good anywhere, it’s in the Ozarks. With that in mind, he might be poised for a very strong week. Today, Watson has been burning the bank up with a topwater and occasionally flipping to a dock when one presents itself. 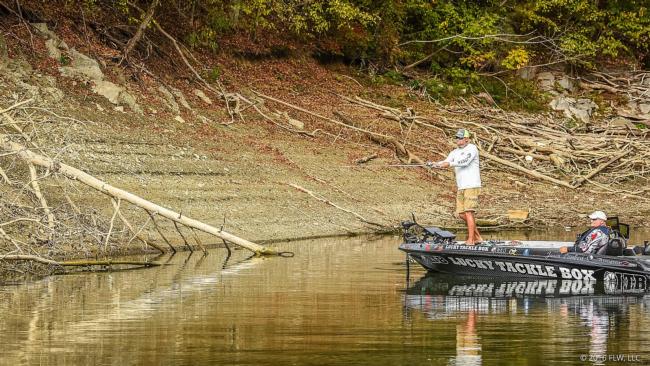 Fishing way up the Clinch, we’ve not got Jason Lambert with the lead. So far, he’s got a limit for about 12 pounds (perhaps even more) and is on the hunt for more. Fishing as far up the Clinch as he is, he’ll likely need to ride at least 40 minutes to weigh-in, and that means he’s got to head back well before 3 o’clock in all likelihood. If he can get up into the low teens, based on the rest of the reports, he’ might have a decent cushion for at least making the cut.

Most of the morning the wind stayed calm, but that’s beginning to change now. At takeoff, a decent breeze is ruffling the water and the number of leaves drifting off the trees is noticeably increasing. Out in the Loyston Sea, there’s a good chop building that might well activate the fish. That said, there are a lot of pockets and creeks on Norris, so if a pro wants to, it should be easy enough to find slick water. 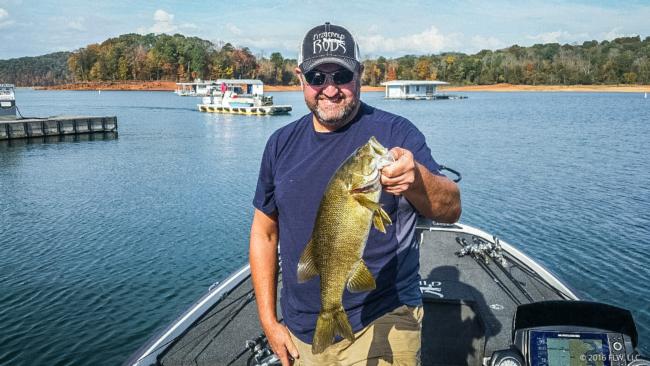 David Williams has been plugging away all morning in a marina (he’s a dock expert form the Carolinas after all), and that decision has paid off pretty well so far. Minutes ago, he completed the first limit of the tournament so far with a 2-pound smallmouth. That fish brought him up to about 11 pounds and gives him the lead by about 3 pounds. 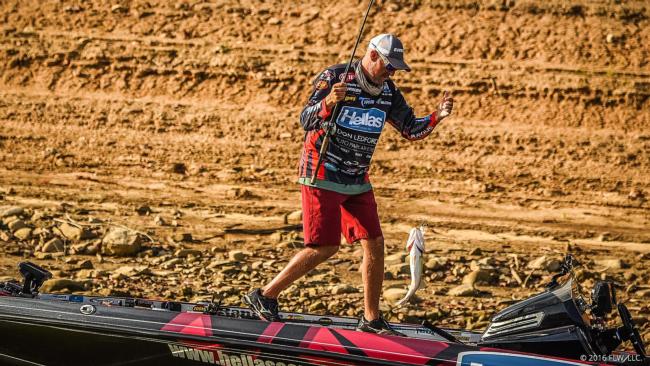 Streaking out into the lead with four fish apiece, Todd Hollowell has about 8 pounds and Wesley Strader has about 7 pounds. Interesting, Hollowell has caught at least one of each species, while Strader has all largemouths. They still have limits to fill, but it looks like Hollowell and Strader are poised for another good time like they enjoyed at Norman.

The most successful at catching numbers so far are David Williams, Wesley Strader, Todd Goade, Matthew Pain and Michael Neal. We’ve got each of them with three keepers and a touch behind Jim Moynagh who has just two. Many pundits predicted that the winner of this event would weigh less than a limit at least one day, but that doesn’t seem likely right now. When you consider that there are still five hours of fishing left for most, it looks like a lot of limits will hit the scale today. 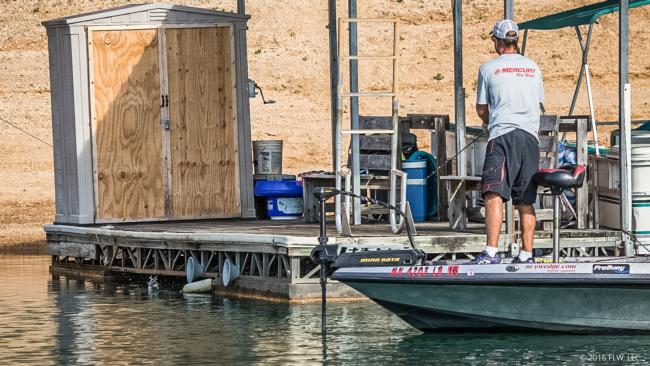 Jim Moynagh, all the way down south from Minnesota, is currently in the lead. After starting the day with a 2+, he added a 3+ to the mix and has about 6 pounds for a total. There’s obviously a long way to go, but most of our reports say the fishing has gotten tougher in the afternoons, so that’s a good little start to have. So far, he's spent the day fishing shallow and caught his big one off a dock. 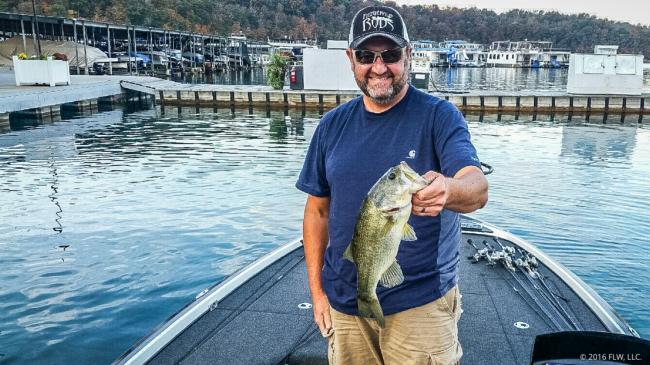 We expected the Loyston Sea to play a lot for smallmouths, and so far a lot of pros are in there. There’s not a whole ton of catching coming from that part of the lake though. Mostly, it’s running around with topwaters on points and chasing schoolers.

Whenever you mix Tour pros with anglers drawn from the lower ranks you expect to see the better, more experienced anglers show out. So far today, that’s proving true, despite the fact that not many of the Tour anglers have experience on Norman. As of now, Matt Arey has a 3-pounder to start and Michael Neal is on the board with two keepers.

So far, in addition to the first three pros on the board, we’ve got Mitch Crane, Stephen Patek and Ray Philhower on the board with keeper bass. Notably, Greg Werner has a 3.5-pound smallie to start his limit out. For a tournament that is supposed to be tough, that’s a key bass.

One thing to consider is that because of Norris’ size, some pros are only just getting to their first fishing spots. It’s a long run way up the Clinch or Powell and there might well be action all the way up them. 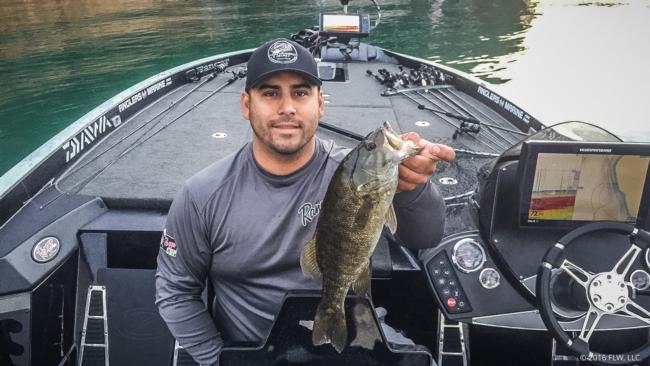 The first three pros on the board are David Valdivia (with an 18-inch smallmouth), Matthew Pain with a small keeper largemouth and David Williams with a 1-pounder. It’s calm and serene all over the lake now and the sun is just starting to rise and light up the fall foliage. So far, we’re off to a great start. 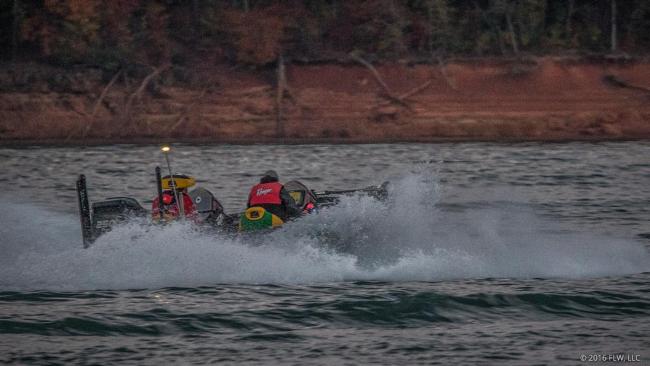 7:30 a.m.: Fall is on the way and the final Walmart FLW Tour Invitational of the year is upon us

Taking out of Anderson County Park on Norris Lake, the start of the final Walmart FLW Tour Invitational presented by Quaker State was warm and calm. Sometime soon, that’s all going to change. Today’s highs are forecasted to reach into the 80s, on day two, the lows are set to be in the 40s with the high only barely scraping past 60 degrees. Though a front is on the way for sure – the first big cold front of fall for east Tennessee – most of today should be pretty good for fishing.

Norris is a sprawling fishery. It winds for miles up the Clinch and Powell Rivers and has a whole slew of creeks and coves on it to boot. For the 98 pros fishing this week, finding fresh water shouldn’t be much of an issue. Today, they’re mostly looking for largemouth and smallmouth bass (which need to be at least 18 inches to keep), though some spotted bass will undoubtedly be weighed in. Like many mountain reservoirs in this part of the country, it fluctuates a lot seasonally and is currently about 20 feet low. Besides taking some cover out of the water, that shouldn’t faze the fish too much.

One of the main questions this event is if largemouth or smallmouth will triumph. We won’t have that answer until the final weigh-in on Saturday, but today will go a good ways toward showcasing a fishery that is a mite tough now, but outstanding when the water temperature is cold.