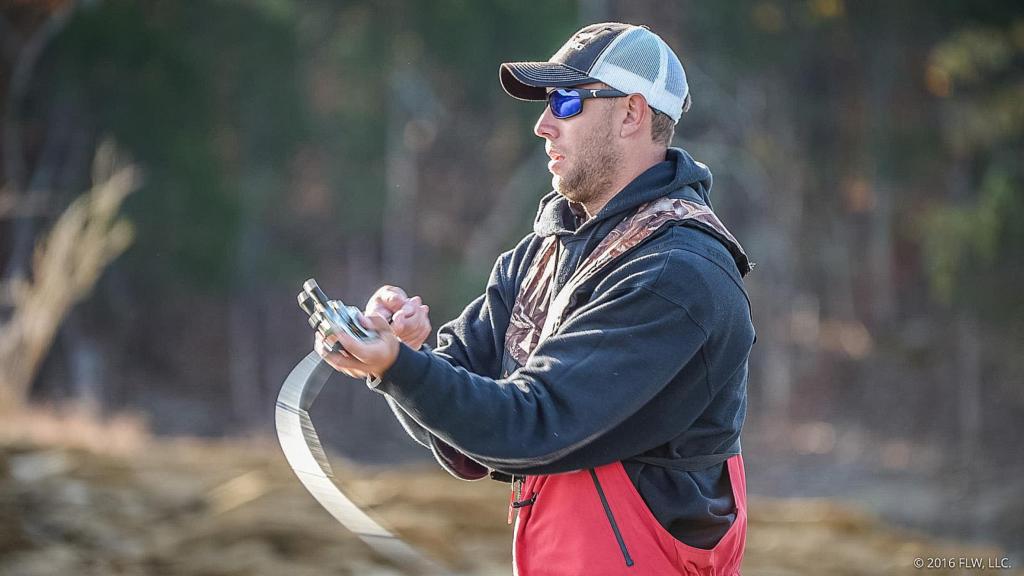 There’s just an hour of fishing left for the pros. Check-in is at 3 p.m. and weigh-in will start shortly after that. Recently, Tracy Adams has made another small cull (emphasis on small) and William Campbell has filled out a good limit which will probably move him up into the top 10. Additionally, Matt Arey recently added a 2-pounder, but is still shy of five.

Up at the top, James Watson probably still has the lead, but Jason Lambert, Tracy Adams and Derrick Blake are all close enough that a good fish in the closing minutes could easily swing the outcome. To find out what happens, the place to be is Anderson County Park or flwfishing.com.

1:41 p.m.: The weather is moderating and Watson missed a big one

Today has been a big buzzbait day, and James Watson almost made it an even bigger one. A bit ago, he missed his biggest of the day on a buzzbait. He’s probably dialed in on the right thing now, but he’ll need to act fast if he wants to ice this derby down.

One thing that affects everyone is the weather, and it’s getting nice out on Norris now. The wind has slacked off a bit, and though you might not fish without bibs and a jacket now, it’s perfect sweatshirt weather on land and the sun is beaming. Anyone coming out to weigh-in at Anderson County Park is going to have a nice time of it for sure. 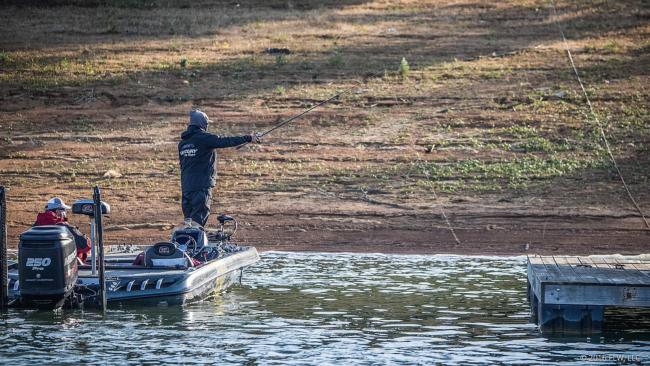 After a long stretch with no bites at all, James Watson finally made a bit of a switch. Laying down the Plopper, Watson swapped up to a buzzbait and immediately caught a pair of shorts. He’s also flipping a few more docks now. Still, he’s really got to add at least one more good fish to ice this thing down. 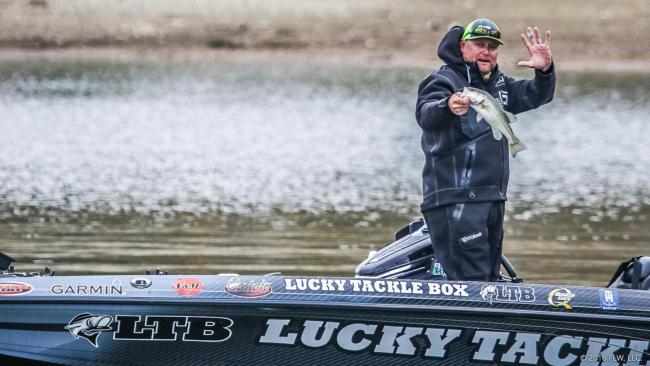 Jason Lambert has culled up shallow after each of his morning flurries. He’s following the same program today and just boated a 3-pounder that brings his weigh up to around 12 pounds. With that, he’s coming perilously close to erasing the deficit between him and James Watson. He still probably needs to cull again to tie things up, but it’s very close right now. 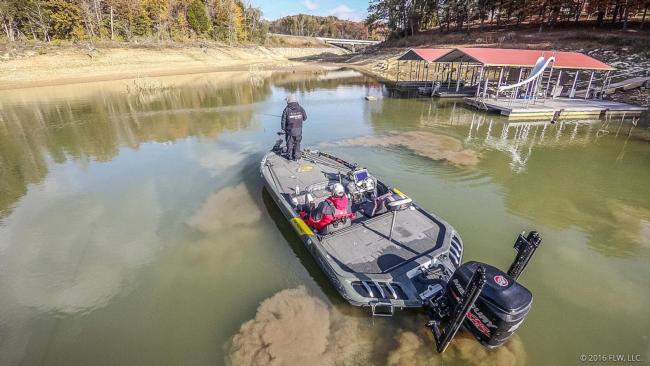 The last time we wrote about a lull for James Watson he broke out of it in about two shakes of a lamb’s tail. This one might be more serious. While Derrick Blake and Tracy Adams are culling up behind him, Watson hasn’t had a bite in more than an hour. He’s flipping the occasional dock and making a ton of casts winding a Whopper Plopper. According to our reporter on the water, he’s beginning to get seriously frustrated. 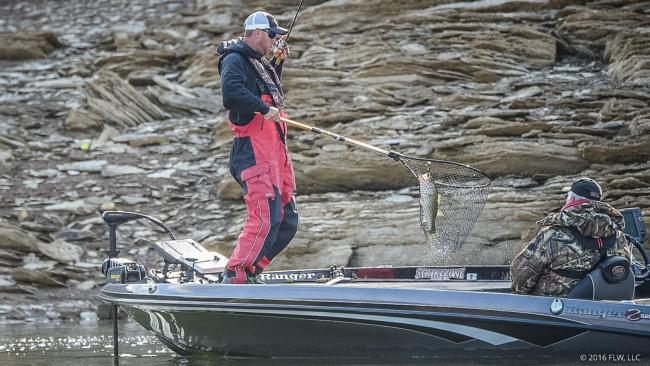 Derrick Blake hails from just down the road and wants to fish the Tour someday. This week, he’s certainly showing his mettle. After a decent lull, Blake made one of the day’s better culls, upgrading by about a pound on a buzzbait. That moves him up into second again and gives him about 11 pounds on the day.

There are still scattered clouds racking over Norris Lake, but there is a lot of sun as well. On the water, the temperature really hasn’t come up too much, but the wind certainly has. At takeoff, there’s a stiff breeze cranking down from the north that has whitecaps rolling in the more open areas of the lake. If anyone out there wants more moderate or easy conditions to catch ‘em in they aren’t likely to get their wish.

Everyone in the top five has a limit in hand, so here’s the unofficial update, with today’s weight listed first and their total listed second. As you can see, Watson still has a pretty substantial lead, but the competition behind him isn't just giving up. 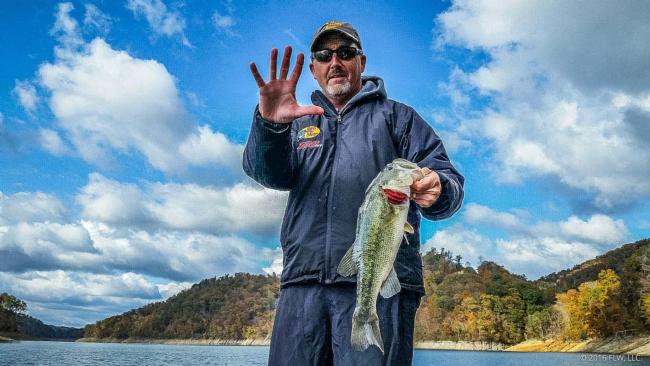 Tracy Adams has had a very strong hour. He filled his limit with a 3-pounder (or perhaps even larger) and then culled up lightly again. Now, he’s up in the 33-pound range with Derrick Blake and Jason Lambert. That’s all well and good, but he’s still quite a bit behind ol’ Watson. 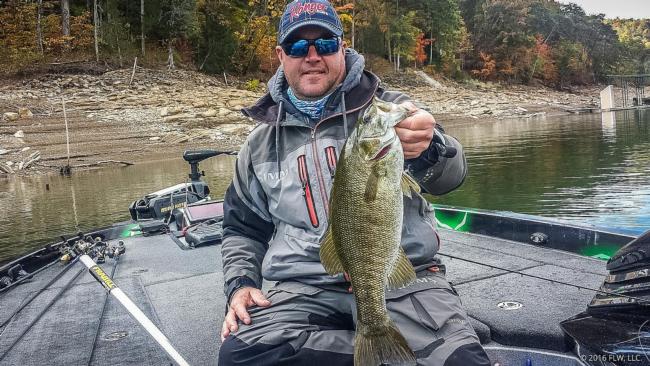 With no action from the leaders in a bit, the time has come to glance around the field. With a single big smallmouth, Kelley Jaye has moved his way up to about 11th place. In fifth, Michael Neal has four for right around seven pounds. Scott Canterbury is up to about five pounds with three fish and Wesley Strader is still on just two small keepers.

The first four that Derrick Blake put in the box weren’t all that big. His fifth keeper was a 3-pounder. Now, Blake is up over 9 pounds (essentially even with Lambert) and looking for a cull. If he managed to run into another 3-pounder or two we might have a talk about the lead.

In the actual lead, James Watson just caught his sixth keeper and made a very small cull. Of the three limits so far, his is the lightest, but he came into the day with a lead and has caught more keepers than anyone else today. 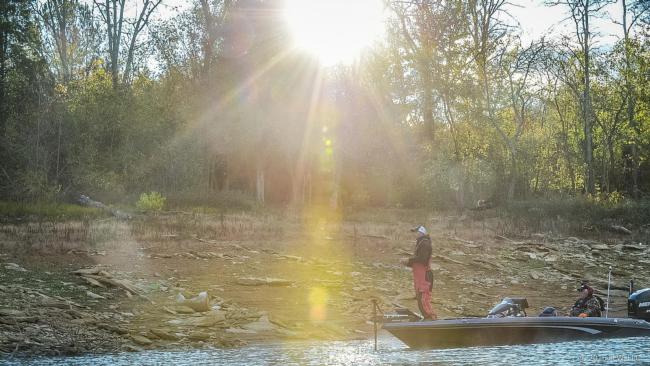 Sometimes the winner will run away with a tournament, but today it’s the top four by a mile. Unofficially, at least for now, Michael Neal is in fifth place and nearly 6 pounds behind Tracy Adams. Up top, it’s still James Watson, then Jason Lambert, then Derrick Blake and Adams, but there’s room to move there as well. Of the top four, Lambert and Watson both have limits, and Blake and Adams are each sitting on four keepers. To this point, the biggest limit goes to Lambert, who has close to 10 pounds. 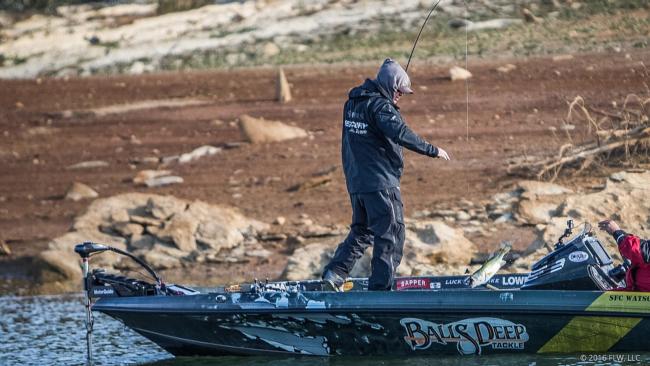 That didn’t take long. Just as soon as it seems like Watson might be slowing down he boxed a solid largemouth on a buzzbait to bring his total up to four fish. Now, he’s got about 7 pounds total and is back in the lead, if only by a smidgen.

According to our reporter, James Watson has fished some incredible looking spots in the last hour. He also hasn’t caught a fish in the last hour. Watson hasn’t been catching them fast and furious for most of the event. In fact, he usually doesn’t limit out very quickly and mostly upgrades in bits and pieces throughout the day. With that in mind, a lull of an hour or so shouldn’t be too much of a worry. Of course, today the weather is a whole lot different and the fishing might be too. It’s not time to panic yet, but it’s worth watching for sure. 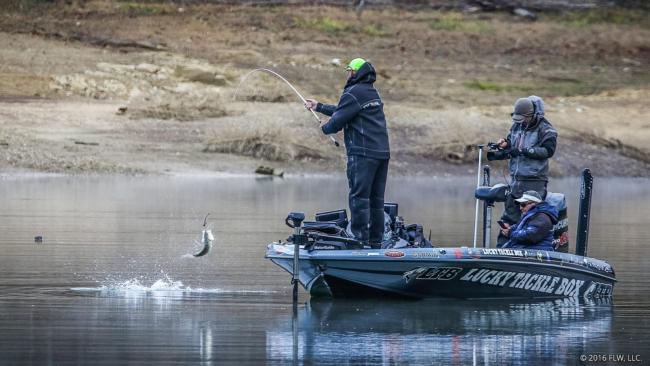 There’s a whole lot of time let, but like yesterday, Jason Lambert has his limit very early. He filled it out with a 1-pounder, so it didn’t really push him ahead, but he’s now got the lead and is looking to cull.

Around him, Mitch Crane has one in the box, Matt Arey caught his second keeper, and Gary Yamamoto started things with a 3-pounder.

Jason Lambert might not be catching them two at a time today, but he’s still catching. After a bit of a lull, Lambert added his third on the day, a nice keeper smallmouth from his offshore area. He followed that up with a 2-pounder largemouth. With that fourth fish, he’s taken the unofficial lead from Watson by just a smidgen. He’s only got one fish over 2 pounds so far, but if bigger ones are out on his offshore stuff he may be able to make a run at this thing. 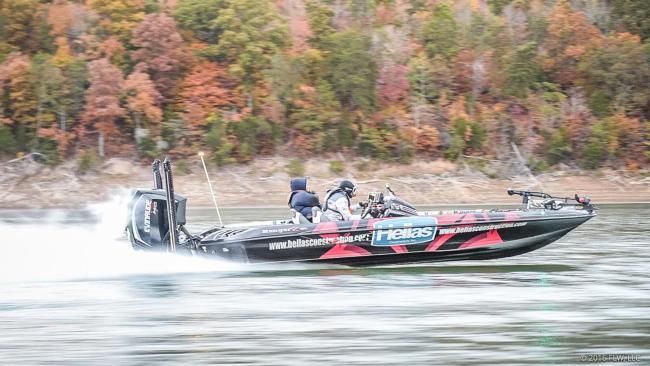 Chunking a buzzbait, Wesley Strader is now on the board. It’s only a small keeper to start, but the way Watson has gotten going, it’s going to take every last ounce for the others to run him down. On a side not, it’s pretty amazing how effective a buzzbait has been this week. They might not look like a fish should eat them, but they dang sure catch fish.

Ahead of Strader, Derrick Blake might have a little something going. He’s got three nearly identical keepers in the box now and is unofficially in second place with about 28 pounds. That’s good, but with the same number of fish, he’s still 3 pounds or more behind Watson. 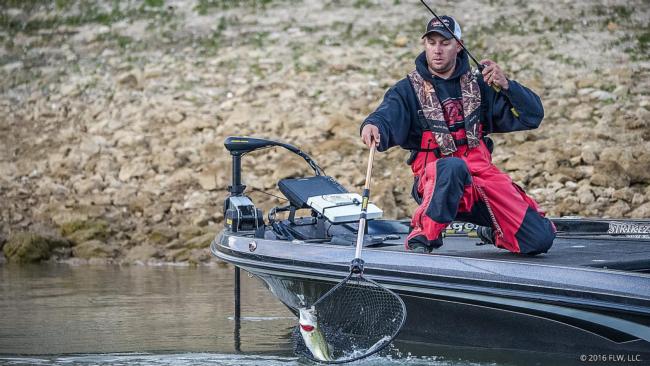 Jason Lambert made it to his school and has started off right so far. He’s caught a keeper and a 2-pounder in short order and more could be on the way. Meanwhile, Derrick Blake has missed some big blowups on his buzzbait and landed one small keeper. 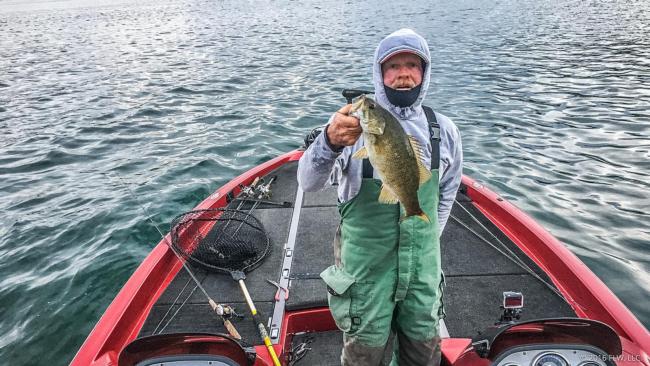 Besides Watson, who hasn’t followed up on his early flurry yet, three other pros have managed to boat keepers. Matt Arey has one small largemouth on a topwater, William Campbell has himself a 2-pounder to start and Bill Dunn got things going with a nice smallmouth.

One thing to watch: Jason Lambert should be arriving at his starting spot any minute now. 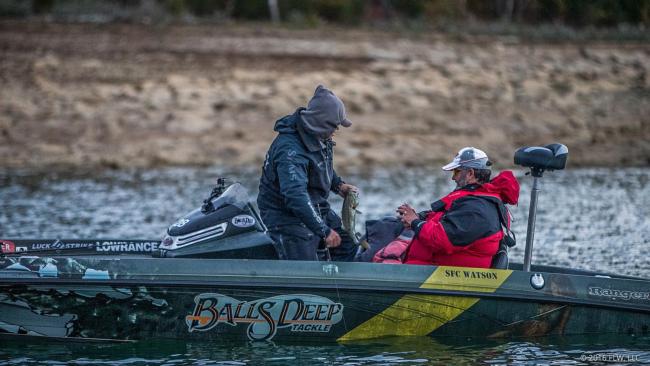 James Watson was sure enough feeling good going into the final day and so far it’s more than a feeling. In the first few casts, Watson struck with a keeper largemouth and then followed that up with an 18-inch smallmouth. Early on, he’s doing it with a spinnerbait and River2Sea Bubble Walker. He’s the only man on the board today and is doing it in style. 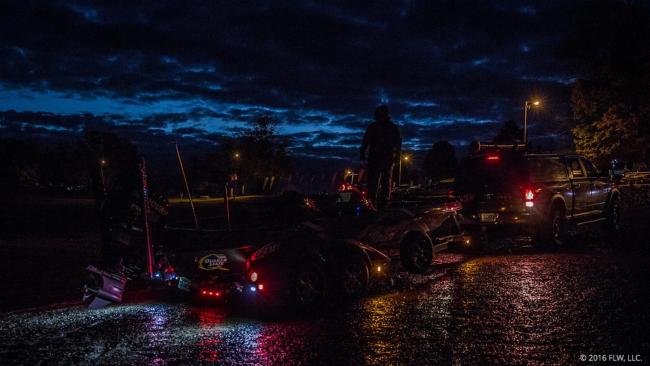 Fall has arrived on day three of the Walmart FLW Tour Invitational presented by Quaker State on Norris Lake. This morning, instead of the balmy conditions of day one, the air temperate is hovering around 45 degrees and the high is about 60. For the second day in a row, the weather will challenge the anglers. The other major challenge will be figuring out how to overcome James Watson.

Watson grabbed the lead yesterday and has been remarkably consistent each day. He’s also beginning to establish himself as an expert in the fall. Considering how tough Norris has been fishing, his 3-pound lead seems like quite a lot on a final day that might offer the toughest fishing of the week.

Behind Watson, Jason Lambert and Derrick Blake are the leading candidates to overcome him. Blake has been running a lot of water well up the Clinch River each day and could be a couple of big bites away from making it a contest. Lambert is perhaps the biggest threat, if only because he’s fishing offshore (in part). The Tennessee pro has located a pair of offshore schools and really only tapped one so far. Though the size of the fish offshore is in question, we’re at the very least looking for a hot start from the ledge expert.

With Wesley Strader, Tracy Adams and Michael Neal all running close behind, there will be plenty of talent waiting on Watson to stumble. In all likelihood, the final day will come down to the wire.