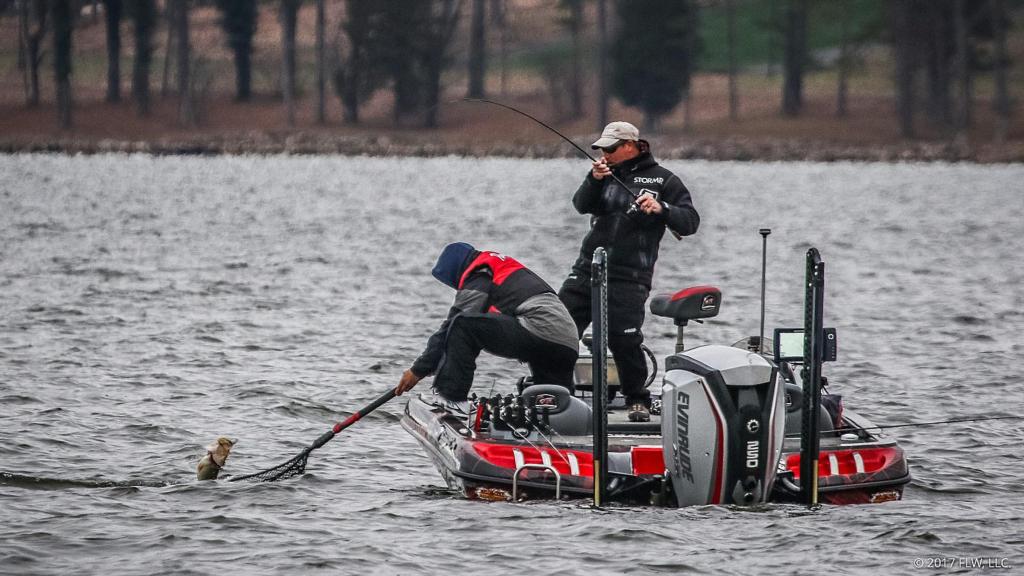 Winding and grinding has been the theme through two days of the FLW Tour event presented by Lowrance at Lake Guntersville. Winding because the old tried-and-true form of lipless rattlebaiting on Guntersville is starting to rise up through the tournament standings as a way to get bit consistently. And grinding because Guntersville is still not exactly on fire in terms of fish catching. Many pros who have made the top-20 cut are surviving on five to 10 bites a day.

Mark Rose now leads the event with a two-day total of 42 pounds, 8 ounces. He’s fishing classic staging areas in hydrilla. Just behind him are four other pros playing the same angle. 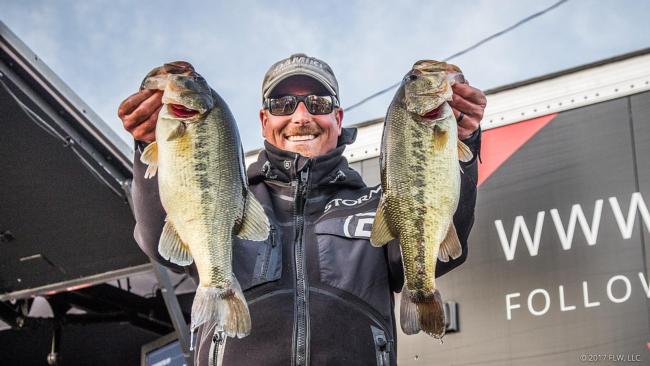 Bryan Thrift backed up his 20-pound, 13-ounce day one catch with 18 pounds, 11 ounces on day two to move into second place.

For Thrift it’s business as usual in the prespawn, running multiple stops for as many opportunities as he can get.

“I call what I’m doing here a form of random flailing around,” Thrift laughs. “I’m just out there fan-casting around in grass, hoping for a bite. I do have a couple of isolated places that I’m running, and one of those produced my biggest fish today. It was just one small patch of grass out there by itself.”

All week Thrift has been frustrated by not being able to find a group of fish. Today, however, that changed.

“Today I did finally find what I would call a group of fish for the first time all week. I caught seven or eight fish in a 15-minute period. I actually Powered-Poled down on that spot and caught them on the same cast. In fact, I caught more fish today, but less weight.”

Thrift revealed that he is using a Damiki Tremor lipless rattler and square-bill crankbait for most of his fishing.

“I probably only fished 15 or 20 spots today – not as many as yesterday,” Thrift says. “Once I found that one spot where I had the flurry, I spent two hours there trying to fire them up again, and that took away from a lot of my running around time.” 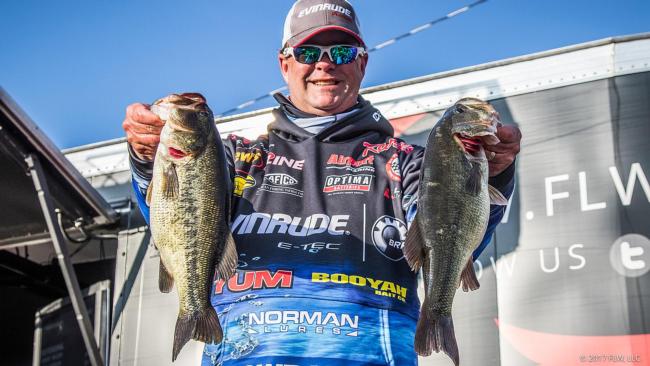 “Eighteen pounds a day the next two days will win,” Wilson says. “If you gave me that, I’d stay at home. This lake is fishing pretty tough right now. This is not the Guntersville we’ve come to know over the years. But it’s still good, and there are fish to be caught. It’s just a bit more of a grind than I think we’re used to, so, yes, I would take 18 pounds a day not to fish.”

Wilson’s primary gig is winding a moving bait in shallow backwaters that are 2 to 3 feet deep.

“I’ve got four primary areas, and I’m doing the same thing in all four of them,” he says. “Most people wouldn’t believe it, but some of these fish get really shallow in February, and that’s what I’m looking for: ultra-shallow fish that have moved in to spawn, but the weather has prevented the spawning from happening.” 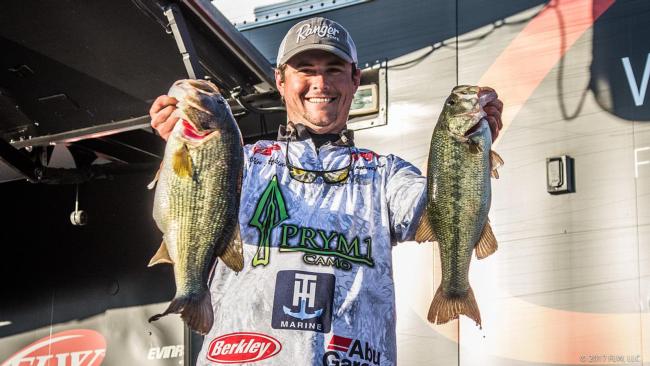 Though you might not have heard of Justin Atkins before, you’ll know his name soon. The FLW Tour rookie has wasted no time proving he can compete by putting himself in the fourth-place spot after two days.

“Eelgrass is fairly new, and I think it’s been here long enough now where certain populations of bass are starting to prefer it over other types of vegetation,” Atkins says. “I have a lot of friends that live over here, so I spend a lot of time over here fishing with them, and we’ve kind of gone to school on this new form of grass. It grows in a very specific depth range and tends to grow in places that are naturally attractive to bass to begin with. So that’s what I’m targeting here. I’m basically cranking eelgrass.”

Atkins is also aware of the realities of the Guntersville fishery right now. He, too, believes 18 pounds a day will go the distance to victory lane in this event.

“The lake seems to be in a bit of a down cycle right now,” he says. “But a down cycle on this lake is still better than most lakes on a good day. So it’s still a good fishery, and I’m sure it will bounce back to an incredible lake once again. But for the last year or so 18 pounds has been a pretty strong showing in local tournaments.” 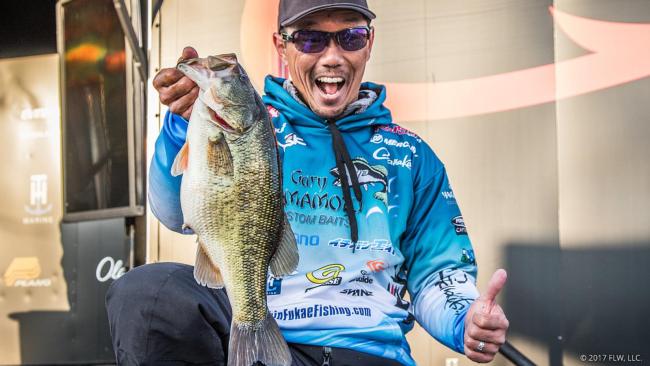 Texans take up more spots in the top 20 of the Guntersville event than anglers from any other state, and for good reason. When it comes to “trapping grass,” Texans are hard to beat due to the amount of grass in Lone Star State lakes.

Shin Fukae leads the Texas crew in the fifth-place spot in the event. And it comes as no surprise to find out that Fukae is playing the grass game with lipless rattlers.

“I am reeling a rattling bait through the grass all day,” Fukae says. “That’s why I am so tired – all day long, reel, reel, reel. I have one hump in the eelgrass where I have caught most of my fish – five yesterday and four today – all off just one spot.”