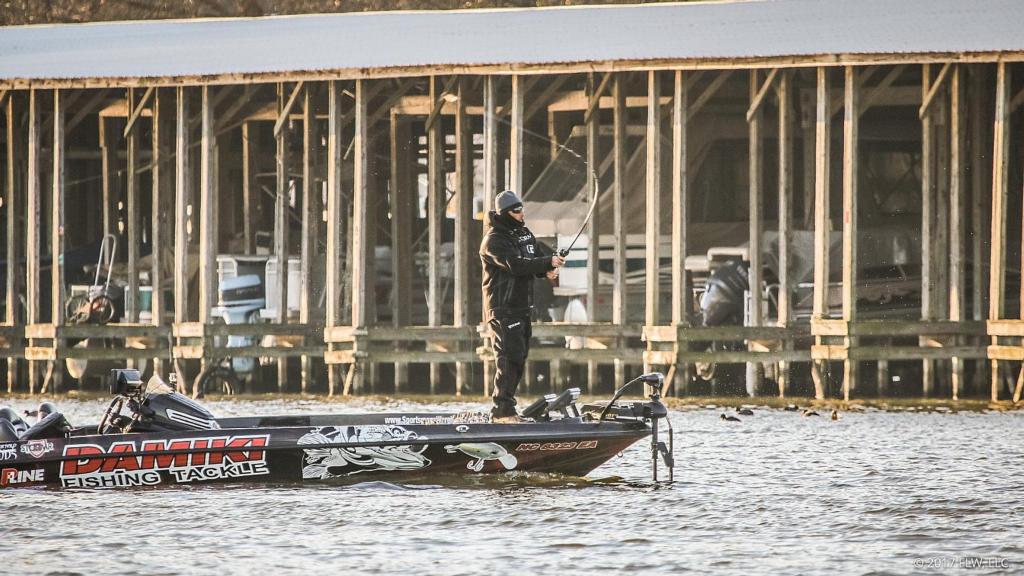 Sunrise on day three of the Lake Guntersville FLW Tour event presented by Lowrance brought the lowest temperatures yet, with Saturday’s takeoff starting in the high 20s. As a result, tournament leaders had to make some adjustments to keep pace, including Mark Rose, who targeted hard cover for his day three catch.

Other anglers trying to track down Rose will have to come up with some big catches to close the gap. Here’s a closer look at how they earned their trip to the final day. 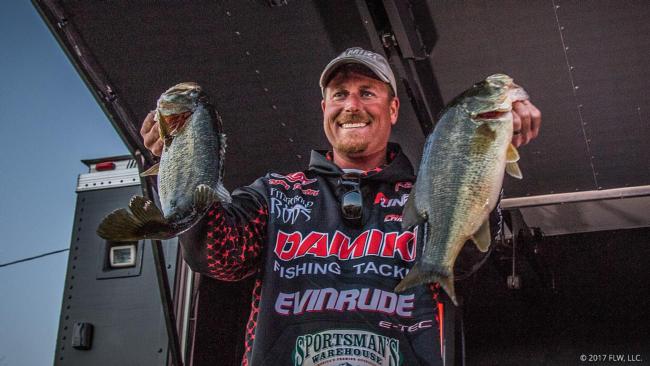 If you ever wake up one morning and find yourself leading an FLW Tour event, chances are Bryan Thrift will be running you down like a bad dream, because he never goes away.

Thrift’s 17-pound, 7-ounce catch on day three put him in the second-place spot and within arm’s reach of Rose. But if Thrift is going to catch Rose he’s going to have to “get more comfortable” – and fast.

“I’ve just been uncomfortable all week,” Thrift says. “I have found one shallow hump that I can pole down on and really pick over with a Damiki Tremor [lipless crankbait], and that place feels good. I caught seven or eight fish off of it yesterday. I started there this morning, caught four solid fish pretty quick and all was going according to plan. I was starting to really settle into that place and feel good about it, and then it quit on me. I only caught four, and then I went back to running around everywhere trying to fish docks, marina slips and more grass. I finally caught a couple of more, but I could never really settle down again.” 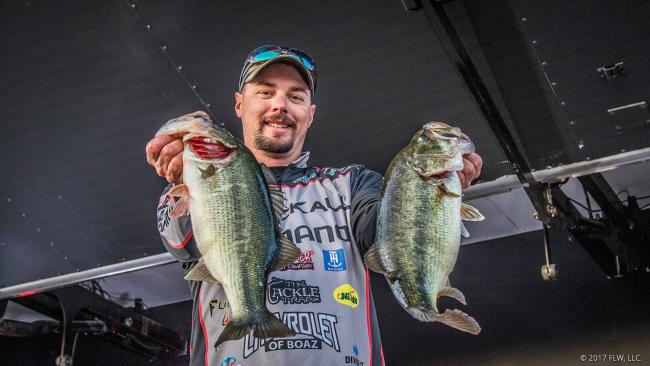 The biggest limit of day three belonged to local favorite Alex Davis who toted 20 pounds, 2 ounces to the scale to jump into third with 54 pounds, 6 ounces.

Those who know Guntersville well say Davis has the best chance of pulling off an upset with a megabag on Sunday.

While others have tapped shallower grass, riprap and staging areas for their catches, Davis has made his living up and down the main river this week, fishing deeper waters in 10 to 11 feet. Many of the spots are subtle shell beds, stumps, turns or depressions that hold fish.

“Some of them, I honestly don’t know what’s down there, but they always hold fish,” he says. “I’m hitting 25 spots a day, and only one of them is off the main river. Those fish live on the main drag all year long. To me they’re more consistent and, on the average, better fish.”

As a local guide, Davis says his biggest struggle is simply having too many places to fish. It’s a case of the grass is always greener at the next spot.

“My GPS has 3,000 waypoints in it,” Davis says. “So when I pull up on one that I know I need to work slowly, my mind is already racing to the next three spots I need to go to. And it’s hard to fish a spot correctly, especially this time of year, when that is in your mind all day.”

At times Davis says he almost envies outsiders who come to Guntersville and find only two or three spots simply because they can fish those spots effectively. 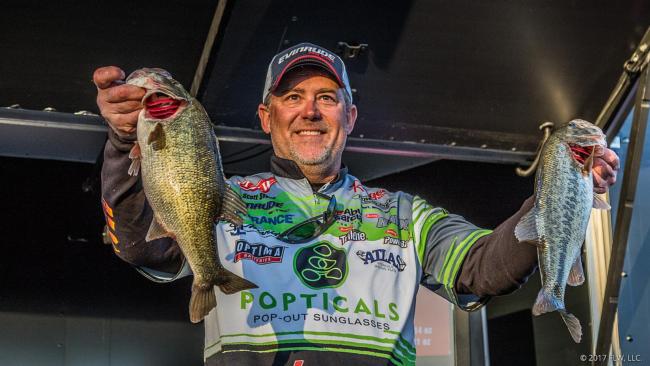 Scott Suggs reeled in 17 pounds, 14 ounces on day three to move into the fourth-place position.

Suggs is playing the grass game with lipless rattlers, targeting ditches through eelgrass. Some of the ditches bottom out in 15 feet and run some 100 yards.

“If I can find a little turn or point in the ditch, that’s money,” says Suggs. “If it’s just a straightaway ditch through the grass, it’s dead.”

Suggs says that during a much warmer practice period, some fish had moved up onto the inside line, but since the cold weather hit, he’s done better on the deeper outside line formed by the ditches. 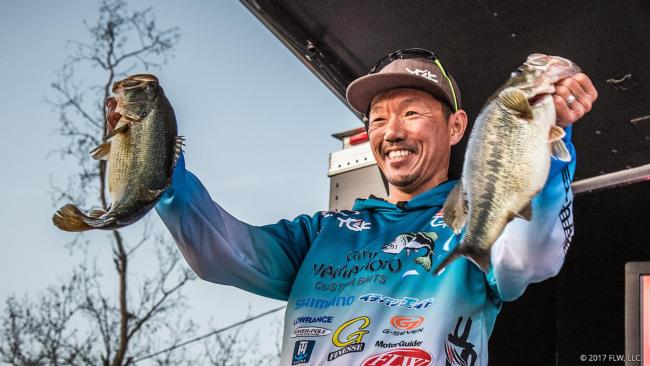 Shin Fukae holds tight in the top five with a 16-pound, 11-ounce catch on day three.

Fukae is targeting shallower eelgrass humps with lipless rattlers. He has six rods on the deck, and all six have the same exact bait on them: a SPRO Aruku Shad. The Aruku comes in three different sizes and myriad colors, and that’s where Fukae gets his variety. He uses the smaller Arukus on the shallower humps and the bigger Arukus on humps that top out at 7 or 8 feet. He also varies his color selection based on water color. The more stained the water, the more he leans toward reds and oranges in the Aruku. If he encounters clear water he moves toward a more chrome or shad colored Aruku.