The FLW Tour might not have landed on a window in which Lake Guntersville was fishing its best, but the lake certainly did not disappoint when it came to providing a thrilling season opener.

Anglers atop the leaderboard climbed the hill with some 20-pound-plus sacks. Plus, the event came down to a final-day fish-by-fish trading of blows between two of the Tour’s heaviest hitters: Mark Rose and Bryan Thrift. Midway through the final day it looked as if Thrift might snatch yet another FLW trophy from Rose’s grasp, as he did in 2014 when he beat Rose on the final day at Sam Rayburn. Then Rose put on a classic display of veteran focus to produce some last-minute heroics and fend off Thrift’s charge.

Though Rose won with shallow-running crankbaits (and a few other baits), the most dominant pattern in the top 10 was the age-old tactic of trapping grass in the 4- to 7-foot range along Guntersville’s humps, depressions and bars. Six of the top 10 used some kind of lipless rattler in grass to catch their fish.

Here’s a look at how the rest of the top 10 fished at G-ville: 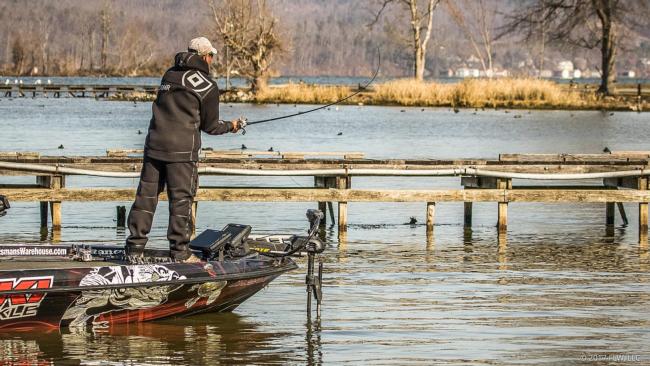 Bryan Thrift of Shelby, N.C., nearly pulled off another one of his patented upsets at Guntersville, making his final-day effort his best of the week by throwing down 22 pounds to pull within 15 ounces of Rose. Thrift would have to settle for second with a total of 78-12 for the week.

Thrift is known for his run-and-gun style, but on the second day of the tournament he ran across a single place where he found his first true “group of fish.”

That place was a large hole, or bare spot, in the middle of a thick eelgrass flat. It housed a boatload of fish.

On days two, three and four, Thrift poled down for a couple of hours per day on the productive spot and cast into it repeatedly. In the end, the spot produced a majority of his weigh-in fish. In order to let the bare spot rest, he fished a set of marina docks in the area to “kill time” while keeping an eye on the juice. While killing time, Thrift also hooked a couple of dandies from the marina docks, showing that no bass near him is safe.

When fishing the docks he skipped jigs up under the boat slips. 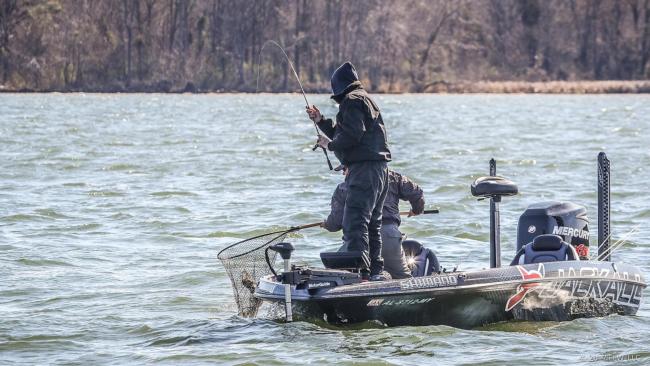 3. Davis stays on the river for third

Alex Davis of Albertville, Ala., started his Tour season off right at home with a third-place showing, checking in a total of 72 pounds, 10 ounces.

Davis eschewed the grass bite all week by fishing a large number of spots along Guntersville’s “main drag.”

Many of Davis’ best spots were places he had learned from years of guiding at Guntersville. Most of them were some kind of structure or cover such as shell bars, rock veins, stumps, subtle dips, depressions and turns along the river.

He targeted those areas with crankbaits, jerkbaits and jigs. His preferred crankbaits were the Jackall Muscle Deep 7+ and Jackall Jaco 58, both in crawdad colors. The jerkbait was a Jackall Squad Minno 128 in super shad, and his jig was a 3/4-ounce D&L Tackle Football Jig.

“There are a lot of bass that never leave that river,” Davis says. “They live out there all year long and spawn on shallow river bars. During tournaments, that’s where I prefer to fish because it’s just more consistent for me. I have an endless supply of waypoints in my unit, and I can run those kinds of spots all day long.” 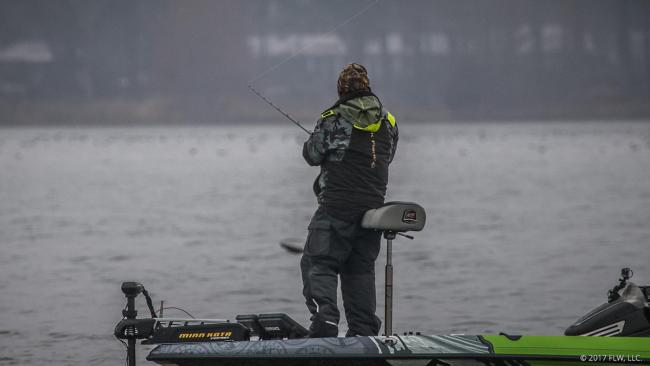 Scott Suggs of Alexander, Ark., reeled his way to fourth place with a total of 68 pounds, 9 ounces.

Suggs was a part of the grass-trapping crew, winding a pair of lipless rattlers over eelgrass in the middle portion of the lake.

His preferred rattlers were a Yo-Zuri Rattl’n Vibe in a rusty gold color and a Berkley Warpig in a special red craw color. He fished both on 12-pound-test Trilene 100% Fluorocarbon.

“I found several ditches running through those eelgrass flats that bottomed out in about 15 feet of water,” Suggs says. “Anywhere a ditch made a turn or a point was key. I would cast out and count the lure down to five and then start reeling it slowly, just ticking through that grass on the edges of the ditches in 5 to 7 feet.” 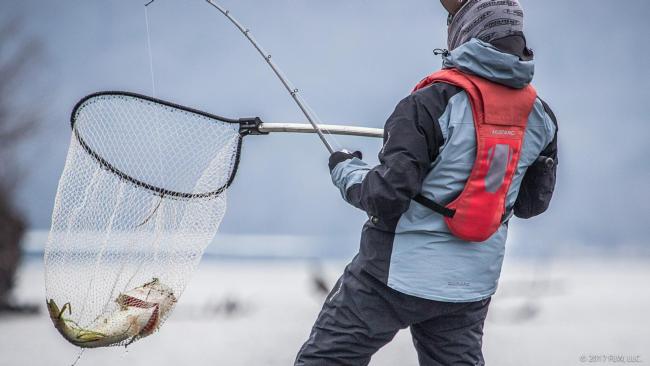 5. Fukae winds his way to fifth

Shin Fukae of Palestine, Texas, reeled a lipless crankbait through grass for four days, checking in mid-teen weights each day to finish fifth with 68 pounds, 4 ounces.

Fukae was so committed to the lipless rattlers that he had six identical setups on his deck each day. Those combinations included SPRO Aruku Shads tied to 16-pound-test YGK fluorocarbon line on Shimano Expride 7-foot, 3-inch, medium-heavy composite rods with Shimano Metanium 7.4:1 reels. The only variations within his bevy of Arukus were the size (he used 3/8 and 1/2 ounce) and the colors. Essentially, Fukae had a lot of the Aruku color chart on his deck.

Fukae fished a series of humps in the Alred Marina area and Siebold Creek, as well as a few places upstream. The humps were topped with a variety of grasses and varied in depth from 4 to 8 feet deep. He used the smaller Aruku on the shallower humps and the larger model on the deeper humps. 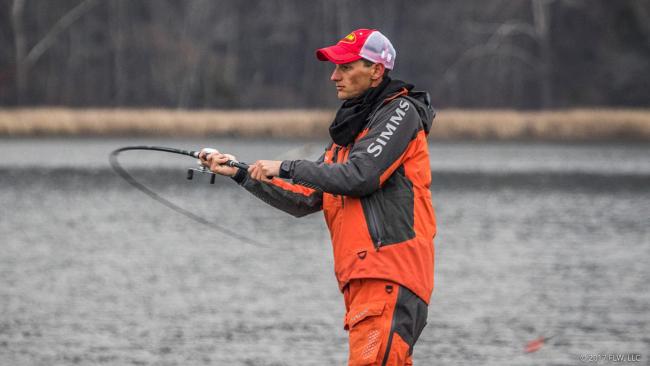 Brandon Cobb of Greenville, S.C., needed only a Yo-Zuri Rattl’n Vibe in matte craw tied to 16-pound-test Yo-Zuri TopKnot fluorocarbon to reel in sixth place on Guntersville with a total of 64 pounds, 10 ounces.

Cobb fished eelgrass in 4 to 6 feet of water in the B.B. Comer Bridge area for his catches.

“I really didn’t have any particular spot I focused on,” Cobb says. “I just got out there and drifted on those river bars, fishing the eelgrass on them. I had one little point that I hit several times each day that provided a few fish, but other than that I was just wandering around in that grass and covering as much water as I could.” 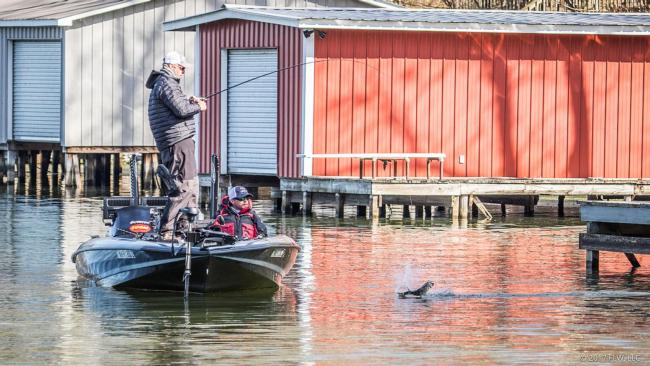 7. Morgan makes another top 10 with a jig

No surprises here: Andy Morgan of Dayton, Tenn., scored his umpteenth top 10 with his patented consistency, checking in mid-teen limits all week to finish seventh with 62 pounds, 14 ounces.

Morgan was one of the few who did not fish lipless crankbaits in the grass for his catches. Instead, he went with his tried-and-true jig, tediously pitching and flipping to any rock or wood along channel-swing banks in the creeks and along Guntersville’s main lake.

“These Tennessee River bass love channels,” Morgan says. “Creek channels and little ditch channels are their roadways through the lake. And anywhere one of those little channels swings up against the hard bank where rocks or laydowns are falling into the channel provides a great place for me to pick them off.”

Morgan’s primary play was to pitch a 1/2-ounce War Eagle jig teamed with a Zoom Super Chunk Jr. tied to 16-pound test Gamma fluorocarbon. He says he trimmed the skirt down for a smaller profile.

“For some reason that smaller profile is important in cold water,” he says. “In fact, I caught some of my weigh fish on a shaky head as well, just to downsize a bit.”

Morgan also weighed in a couple of fish with a Livingston Lures FlatMaster crankbait fished around rock. 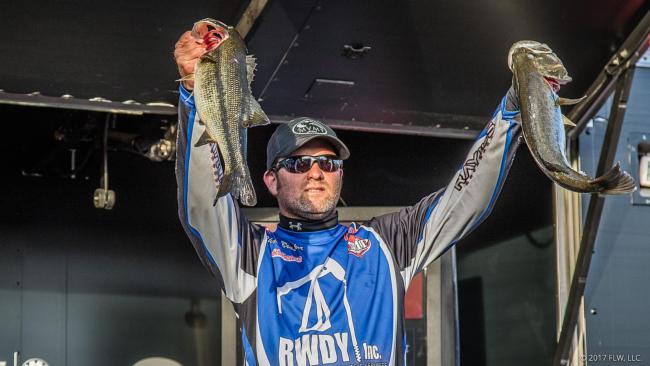 Although eelgrass is somewhat new to the Tennessee River system, Brasher says he has fished eelgrass before on Toledo Bend in Texas, adding that Lone Star bass seem to like it in the prespawn.

Brasher applied his eelgrass knowledge at Guntersville by relying on two spots for his catches. One was a drain loaded with eelgrass, and the other was a river ledge featuring deeper eelgrass along the channel.

“The back of the drain had some of the tallest, greenest eelgrass I found all week,” Brasher says. “It was about 5 or 6 feet deep, and the grass grew almost to the surface, creating some nice holes and gaps.”

When fishing the holes in the tall eelgrass, Brasher used a homemade vibrating jig and a Black Angel Lures Swim Jig, both in a bling bream color. He fished them on 17-pound-test fluorocarbon.

When fishing the deeper spot, which featured a grass-lined depression off the river in about 9 feet, he used a 6th Sense Quake 70 rattle bait and a 6th Sense Crush 250MD (both in lava craw). 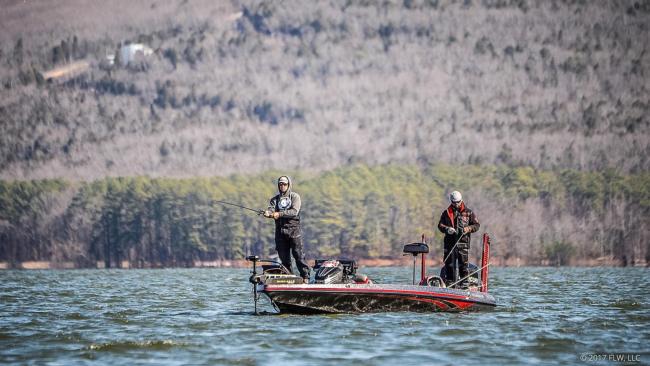 FLW Tour rookie Justin Atkins of Florence, Ala., wasted no time in securing his first top 10 at Guntersville. He finished ninth with a total of 61 pounds, 15 ounces.

Atkins’ primary play during the week was to crank eelgrass in the B.B. Comer Bridge area of the lake with a brown crawdad-colored Rapala DT6 tied to 15-pound-test Berkley Trilene 100% Fluorocarbon.

Atkins has spent a lot of time fishing the newer form of vegetation in Guntersville and says the hard, dense nature of the grass serves as a current break for prespawn fish looking to get out of the flow.

“Hydrilla and milfoil are much softer grasses, and the current pushes through them easier,” Atkins says. “But that eelgrass is much heartier stuff. It grows so dense and thick that it takes a lot more current to push it over. Therefore, it provides a much better current block in the wintertime.”

Instead of threading the eelgrass with a lipless crankbait like others did, Atkins preferred the quieter, stealthier DT6.

“This lake gets so much pressure with rattling baits that sometimes something a little quieter is better,” he says. “Plus, I can really control where I run that bait by raising and lowering the rod tip, sort of finessing it through that grass. And it floats, instead of sinking like a Trap, letting me sort of suspend the bait in the grass on the pause.” 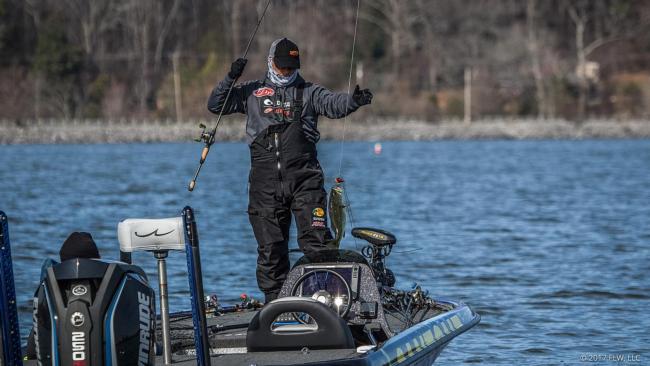 Chris McCall of Palmer, Texas, represents the third Texan to score a top 10 at Guntersville. He weighed in 55 pounds, 12 ounces.

McCall is a grass-trapping expert and was able to put his skills to work despite some noticeable differences between Texas and Alabama largemouth bass.

“The biggest difference here [Alabama] is it seems these fish don’t mind being close to the main river this time of year,” McCall says. “In Texas, the fish seem to migrate more toward big protected bays and drains in February.”

Each day McCall loaded his deck with an arsenal of original Bill Lewis Rat-L-Traps in varying sizes and colors. He cast the baits at subtle depressions or “bowls” throughout the midsection of the lake, trying to specifically target points of grass in the bowls.

McCall rotated through a lot of colors on purpose. One thing he’s learned after years of trapping grass is that, for some reason, just changing up bait colors can suddenly produce a bite during big lulls.

“It’s happened to me enough over the years that there is something to it,” McCall says. “I can’t explain why it happens, but I can reel a Trap for an hour without a bite, pick up another color and get bit immediately with the new color. One day here I weighed in a limit, and every one of them came on a different color.”