How the FLW Tour’s best got it done in Texas 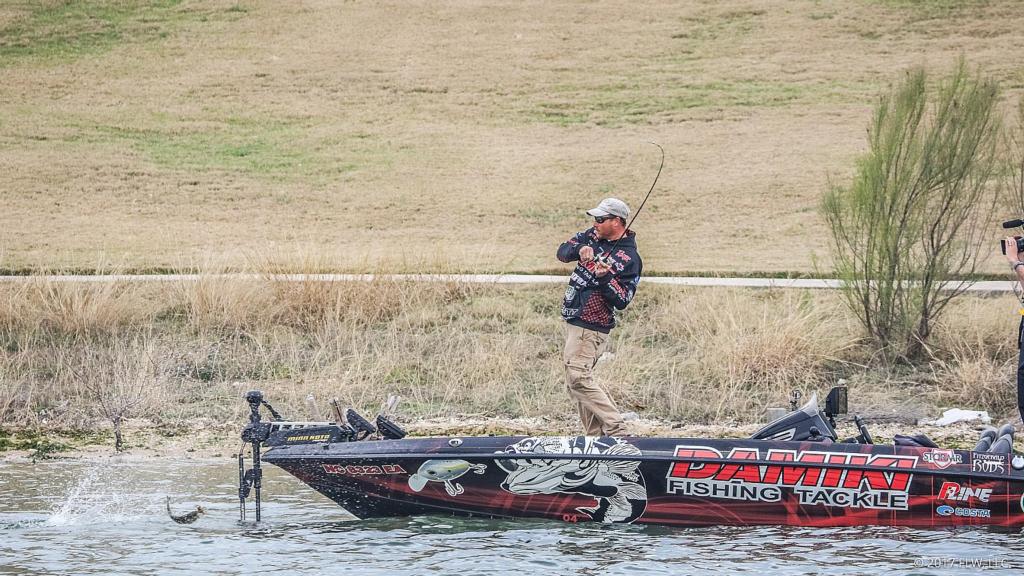 While the ongoing duel between FLW Tour titans Mark Rose and Bryan Thrift has certainly stolen the show at the first two FLW Tour events of 2017, there were other interesting story lines worth noting from the FLW Tour event on Lake Travis presented by Quaker State.

Rose won the event fishing out on big main-lake points, focusing on the steeper, deeper breaks off those points. But others in the top 10 fished a host of patterns and lures.

The myriad techniques covered everything from targeting deep breaks to fishing marinas to cranking shallow to slow-rolling spinnerbaits to working floating worms to flipping bushes. In addition, the daily weights at Travis were very inconsistent. A pattern that brought a big bag one day would result in a donut the next.

Here’s how the rest of the top 10 pros navigated Travis’ inconsistency for their top finishes.

For the second time in three weeks, Bryan Thrift of Shelby, N.C., finished second to winner Mark Rose, missing the win by less than a pound and finishing runner-up with a total of 58-6.

Thrift weighed in the heaviest bag of the week on day one when he took a big early lead with 24-12. Much of that weight came on a shaky head fished offshore and rigged with a Damiki Finesse Miki 6.5 on 8-pound-test P-Line.

After that big catch, however, Thrift couldn’t quite get in the rhythm he wanted for the win.

“The second day, so much of the lake was covered up in boats that I just hunkered down in a few offshore areas and ground it out,” says Thrift, who weighed only 9-6 on day two. “On the third day, with just 20 boats, I started running new stuff to see if I could find something else developing on the lake, and I just never found something else strong enough to get it going.”

A lot of Thrift’s running and gunning included fishing docks, bushes and shallow pockets. Docks accounted for three of his biggest fish during the week. Thrift did his dock work with his tried-and-true 1/2-ounce jig with a variety of chunks. 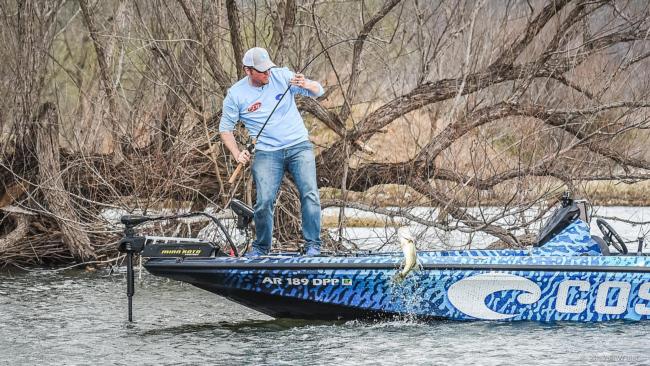 3. Running far pays off for Hays

Rookie pro Dylan Hays of Sheridan, Ark., checked in the most consistent weights, varying between 13 and 15 pounds each day, to climb to third place with a total of 54 pounds.

Hays won the unofficial Long Distance Award for putting the most miles on his boat during the four-day event. He ran some 50 miles each day all the way to the next dam on the Colorado River. Some of his catches in the river came from fishing current breaks when the water was running and pitching to a variety of bushes, rocks and bank debris that blocked the current.

Farther down the river, Hays also discovered a hot spot located on a big flat point in a river bend. A big school was staged up on bushes and rocks.

“The fish in that current up by the dam were not real reliable,” Hays says. “They would bite one day, but not the next. So those fish on that big point really helped me stay consistent. If the current fish didn’t bite, I had that point to fall back on.” 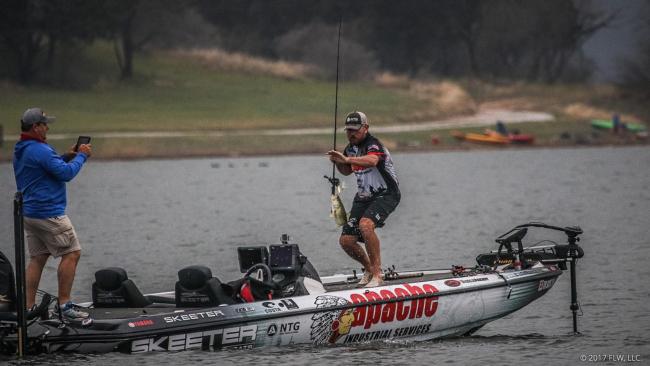 4. Reehm blades his way to fourth

Reehm’s technique helped prove just how diverse the lure selection was on Travis. He did a lot of his damage slow-rolling a spinnerbait.

“I was fishing a big main bar way up the river, and it had a lot of those really big shad on it, so I went with a 3/4-ounce War Eagle spinnerbait with double willow blades to try and mimic that forage,” Reehm says. “I’d count it down to about 10 to 15 feet and then just sort of roll it over those bushes at that depth.”

Reehm also used a Carolina-rigged watermelon Zoom Fluke, and on the final day also added a Keitech 4.8 swimbait on a 1/2-ounce Revenge Swimbait Hedz to his arsenal. 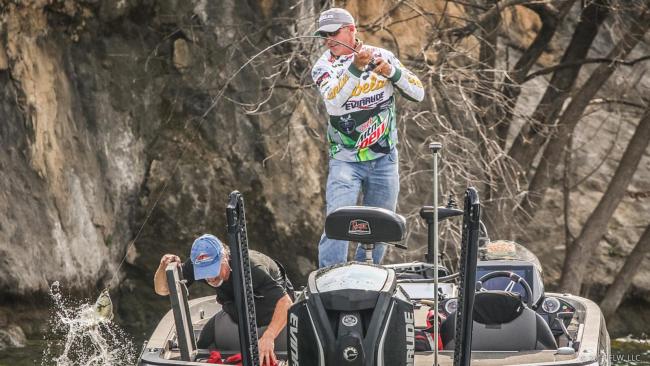 Hometown favorite Clark Wendlandt of Leander, Texas, did not disappoint his fans at Lake Travis, making a fifth-place showing in his backyard with a total of 52 pounds, 12 ounces.

Wendlandt wowed the home team on day two with the biggest bass of the tournament – an 8-6 – which rocketed him into the top 10.

In the afternoons Wendlandt moved shallower to try and intercept any waves of fish that might be moving up. To do this he cranked stair-step rocks, fished timber and flipped bushes in the cuts and pockets. 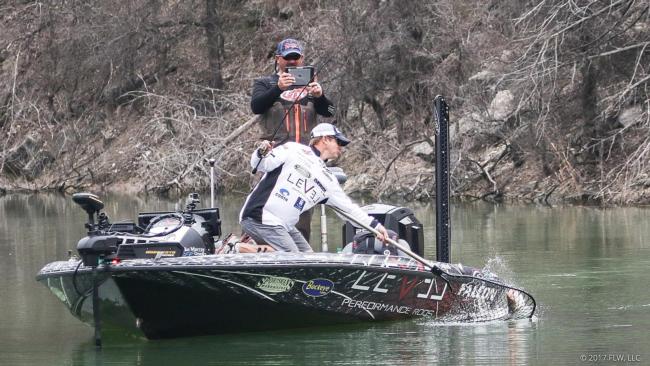 Anthony Gagliardi of Prosperity, S.C., scratched and clawed his way into the top-10 cut and then rallied on the final day with his best bag of the week – 16-9 – to finish the event in sixth place with 51-12.

For the first three days of the event, Gagliardi mostly targeted staging fish in the mouths of spawning pockets up the river. Most of those fish came on a 3/16-ounce Buckeye Lures Spot Remover shaky head and a drop-shot.

With nothing to lose and everything to gain on the last day, Gagliardi moved up shallow to see if the warm weather had drawn any fish toward the bedding areas, and his timing was perfect as he intercepted a few big fish moving in to spawn.

“Late in the third day I pulled into a pocket and had a big fish follow my [Little Creeper All American] Trash Fish swimbait to the boat,” Gagliardi says. “So I went straight to that spot first thing on the last day, pitched a jig in there and caught a big one.”

That was the cue he needed to keep “teasing” with the Trash Fish – using it as a search bait to get fish to show themselves – and then following up with a jig or floating worm to get the fish to eat.

His follow-up jig was a 1/2-ounce Buckeye Lures Mini Mop Jig with a chunk, and the floating worm was a merthiolate Zoom Trick Worm. 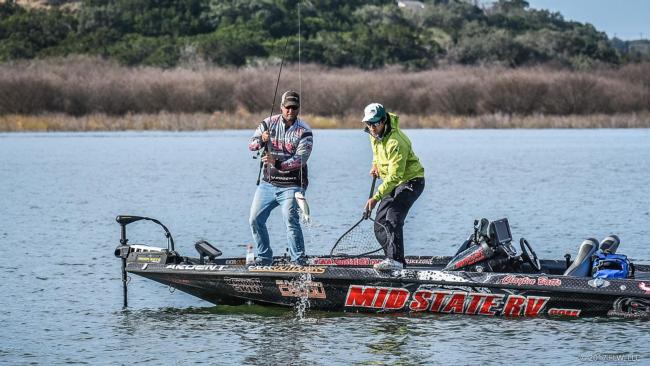 Clayton Batts of Macon, Ga., planted himself on one river bar far up the Colorado to catch consistent limits in the 9- to 14-pound range for a total of 48-1.

Batts says his best area was an old river bar littered with bushes that topped out at 7 feet. The bar featured two sets of breaks: one in the 9- to 10-foot range and the other in the 20- to 25-foot range. Batts found a line of timber on the deeper break.

Batts thinks the bass were ultimately headed to the top bushes to spawn, but were staged up feeding on the treeline break off the bar. The tops of the trees came up to within 10 feet of the surface, so Batts needed baits that would tickle the tops of those trees. He accomplished that with a Strike King Series 5 crankbait on 12-pound-test fluorocarbon and a Strikezone CB Sling Blade, a unique swim jig featuring a blade off the chin, which he fished on 16-pound-test fluorocarbon. When he saw fish on his electronics out on the deeper breaks he targeted them with a 3/4-ounce Strikezone football jig or a drop-shot, which produced several of his fish. 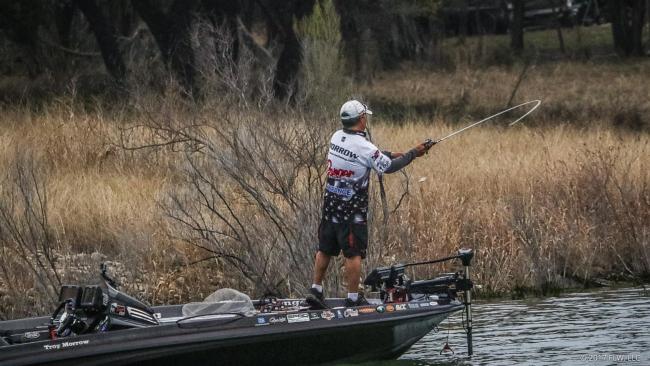 As another example of the wide variety of ways to catch bass at Travis, Troy Morrow of Eastanollee, Ga., cranked his way into the top 10. Morrow’s weights were consistently in the 10- to 14-pound range as he tried to pick on the first wave of bass moving into the pockets.

Most of Morrow’s fish came by cranking a SPRO Little John MD on 12-pound-test Sunline in little cuts, pockets and indentions in Travis’ steep banks. The cuts were often lined down the sides with bushes, and making perfect casts down the middle of the lanes required patience.

“There was so much scum and algae on the bushes that if I hit one, it scummed up the bait immediately,” Morrow says. “So there were a lot of wasted casts. I usually had to make multiple attempts before I could find a clean cast, and when I did I would sort of give the bait a stop-and-go action to make it look like it was deflecting off the bushes.” 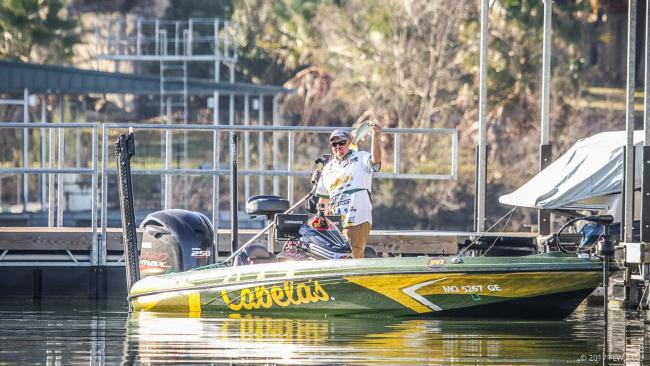 Jeremy Lawyer of Sarcoxie, Mo., experienced Lake Travis’ fickleness at its finest when he blasted 19 pounds, 7 ounces fishing marina docks on day two but was never able to duplicate the marina pattern anywhere else on the lake.

“Marinas will often have that one magic boat slip where all the fish group up,” Lawyer says. “I know from my experience on Table Rock that it usually takes a long time to find that one magical slip out of a hundred. Somehow I stumbled across one of those slips on day two.”

Lawyer was pumped about his discovery and started running marinas the rest of days two and three, but couldn’t repeat the magic.

He used two lures to fish the marinas. The first was a 3/4-ounce Jakked jig teamed with a Zoom Ultra Vibe Speed Craw and fished on 25-pound-test Lew’s APT line. The second was a 1-ounce homemade spoon. 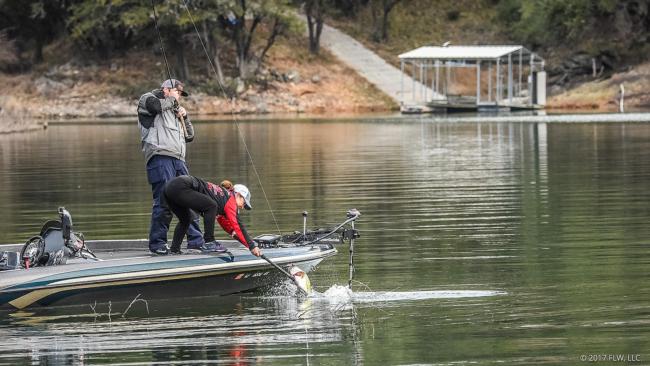 Stephen Patek of Garland, Texas, led the tournament on day two after crushing opening limits of 20-5 and 14-1. But then Patek’s well went dry, leaving him in 10th place with a total of 39 pounds.

“I just ran out of fish,” Patek says. “I only found a couple of areas that had staging fish in them, and they never reloaded.”

Patek caught the majority of his weigh fish off an old roadbed that crossed the mouth of a spawning pocket, creating an 18-foot-deep saddle across the middle where staging fish stopped. His best gig on the roadbed was dragging a Carolina-rigged Zoom Ultra Vibe Speed Craw in green pumpkin.