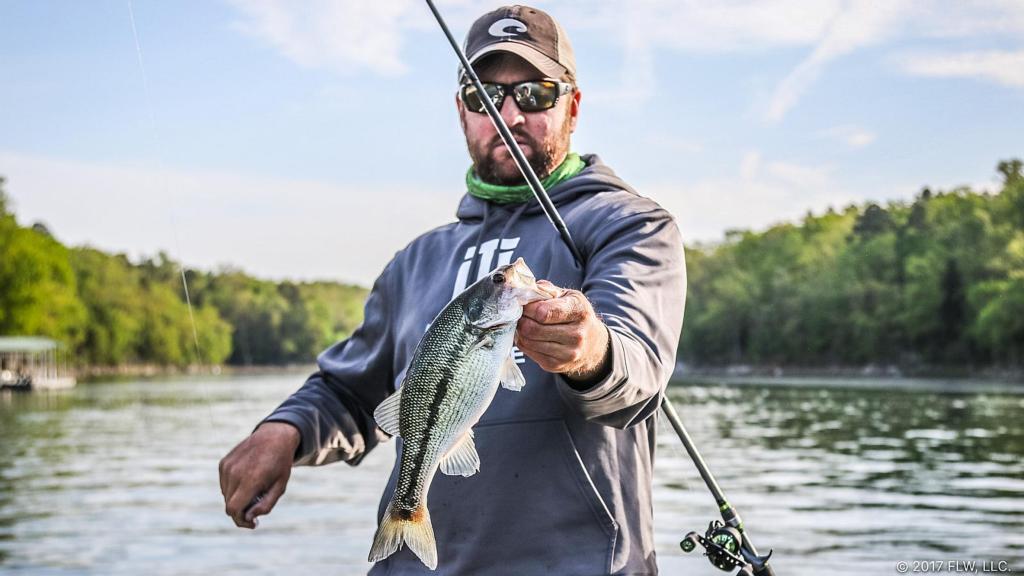 Much like the protagonist in a certain children’s book, Matt Arey is having a terrible, horrible, no-good, very bad practice. The veteran Quaker State pro, who won FLW Tour events here in 2014 and 2015, will be the first to admit that his practice days for the FLW Tour event presented by General Tire have not gone to plan.

“On a scale of one to 10, I’d give this about a two,” says Arey as we motor away from Prairie Creek ramp Tuesday morning. “It’s been one of the most challenging and frustrating practices I’ve ever had at this event. Nothing’s clicked and I haven’t dialed in to what the fish are doing.” 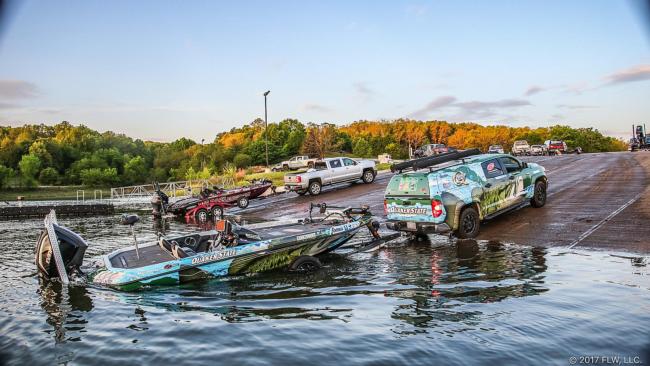 On Monday, Arey’s lower unit went out, and he lost over a half a day of practice getting it repaired. And then, when he did get back on the water, he couldn’t find fish.

Not a good kick-off to a tournament on what Arey describes as his all-time favorite – and most lucrative – lake.

“That’s what makes it even more frustrating. I’ve won more money here than anywhere else.”

Beaver has definitely been good to Arey. He’s had two wins, a fifth, and a seventh in Tour events here, but right now?

“I don’t feel I’m on fish I can even cash a check with. You get spoiled when you have success on a lake, and then you struggle.” 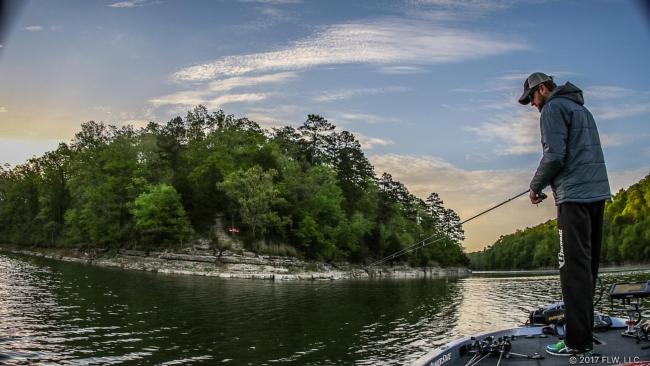 But Tuesday, which dawned bright and clear, is a new day, and after Arey leaves the ramp he makes a short run up the river toward a creek arm he wants to check out.

“My expectations have always been high for this lake,” he says as he flips a jig along the creek arm bluffs. “The last few times I fished here I got exactly dialed in to what was going on, but this time I’m still searching.”

Arey places the blame squarely on the wild weather swings that northwest Arkansas has endured in the past month.

“They had a big-time warming trend here a month ago that sent a lot of fish to the banks, but a lot of them haven’t come up, and then the lake went up four feet in the span of a few days, so it seems the fish are just in this sort of in-between funk.”

The first time Arey won at Beaver, he won on a jig. In 2015, it was a swimbait. Today Arey is switching between a jig, a jerkbait, a hookless Lunkerhunt Lunker Stick, and a bait Arey would rather not disclose just yet.

“Today I’m just going to focus on trying to tap into a largemouth bite,” he says. “And try to figure out what stage they’re in up the lake. Down the lake I feel there’s a lot of fish pulling up to spawn, and that’s my backup plan. I’m just going to go down there blind.”

Despite his motor issues, Arey has managed to check out most of the lake the first two days of practice, hitting anywhere he thinks he might get a bite or find a pattern. 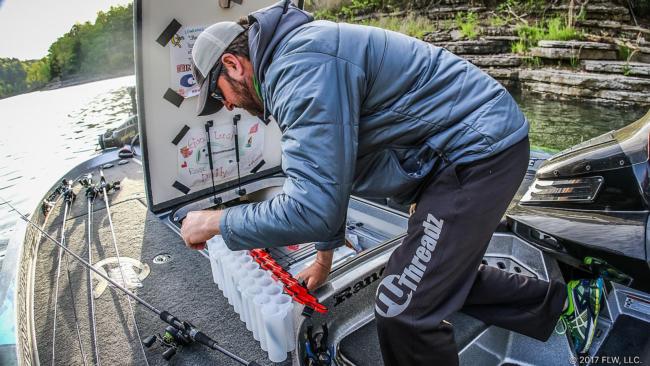 As he casts, Arey is constantly observing the water, and he suddenly notices something that piques his interest.

“Look at that!” he exclaims as he gestures toward patches of floating leaves in the dingy, off-color water in the middle of the creek arm. “That’s shad spawning right there. Right out there in the middle of the water under that trash. Hmmm, that’s interesting. That’s something I haven’t seen in practice yet.”

Arey decides to make a run to another spot across the lake to see if he can find other areas where shad are spawning, and as we bounce around from area to area, trying to beat the end of this newfound morning shad spawn, Arey discovers that some spots have what he’s looking for, while others don’t. He picks up fish in a few areas, and, according to him – gets more bites than any other day of practice, so his mood is decidedly upbeat.

“I at least feel like I can get a limit now, but it may not weigh anything. This is a morning bite, but I’m hoping I can expand it throughout the day,” he says. “Although the shad stop spawning, the bass will still be hanging out in the area, and you can still get a few bites off of it. The way my practice has been, that would suit me fine.” 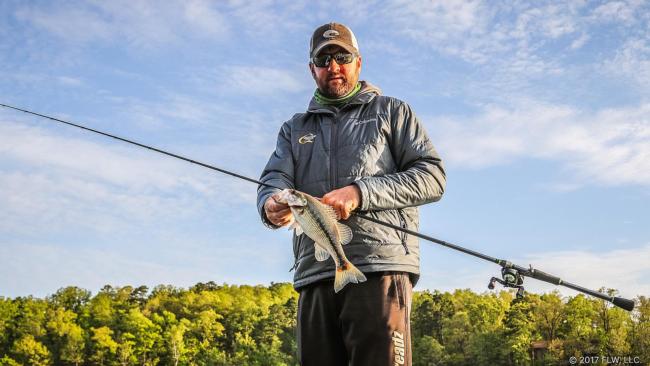 He continues probing with his undisclosed bait, but with his shad bite cooling off, he begins concentrating on finding an additional afternoon pattern to supplement his newfound bite.

“I’m gonna check out a couple little spawning pockets here to see what I can see. I figure post-spawn fish are going to be the dominant deal this week, and I’ve got to figure out something they’ll eat throughout the day.”

As the morning heats up Arey begins having more luck with the hookless wacky rig, trying to determine the size of fish before gently shaking them off.

“I’m just going to try to junk fish my way around this afternoon,” he says. “I’m fishing areas where they would spawn, but I’m not seeing them because of the water level. I feel like there’s fish there, along the original shoreline. Stabilizing the water will go a long way toward helping the bite.” 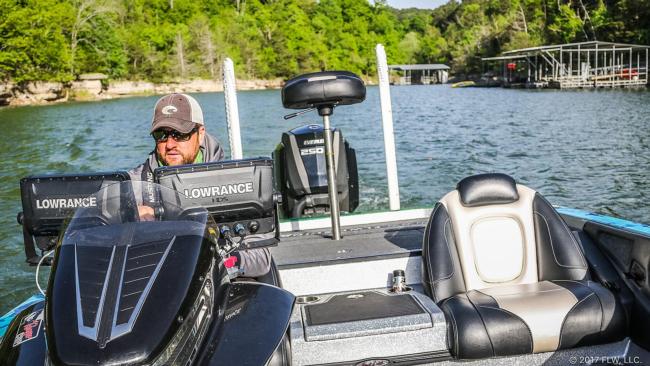 On the way back to the Prairie Creek ramp, Arey is much less gloomy than he was when we left.

“I had a lot better day today, that’s for sure,” he says. “Not great, but better. I don’t think it’s going to be as good as it’s been the last few years, weight-wise. The last couple years it’s taken 60 pounds to win this, but if you gave me 55 pounds this week I’d take my chances.”

Format: All pros and co-anglers will compete for two days. The co-angler champion will be crowned on day two, and the field will be cut to the top 20 pros on day three and the top 10 pros on day four. The winners will be determined by total cumulative weight.