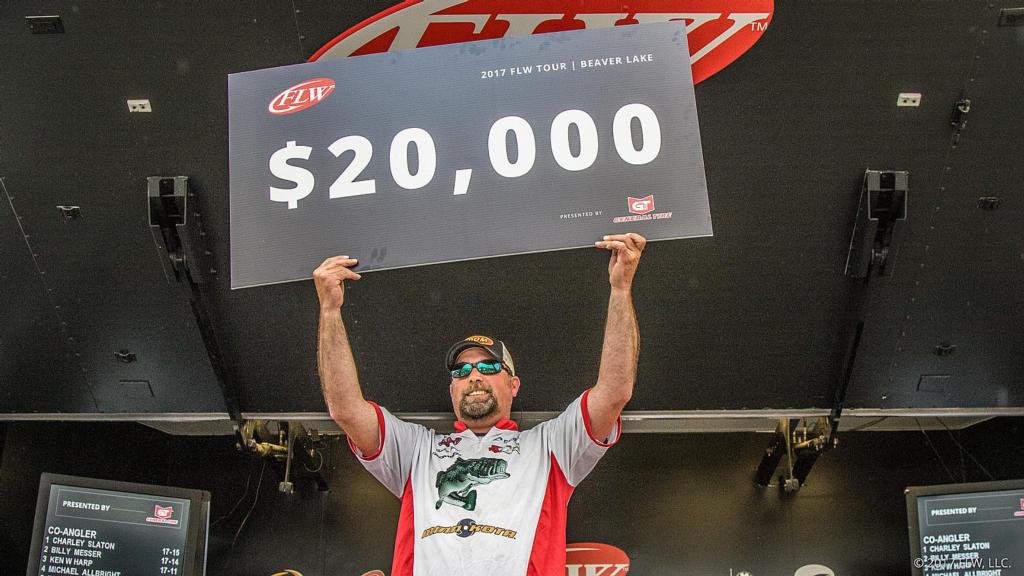 It took a while for 38-year-old Charley Slaton of Valliant, Okla., to figure out what bait to use on Beaver Lake’s rapidly rising waters, but when he did, he rode a Carolina rig all the way to a $20,200 check and the co-angler championship at the FLW Tour event at Beaver Lake presented by General Tire.

Slaton took the initial lead Thursday with a 12-pound, 4-ounce bag, and followed it up with a smaller, but just-enough 5-13 bag on Friday for a two-day total of 17-15. Slaton’s total edged out second-place finisher Billy Messer of Spartanburg, S.C., by a single ounce. It was Slaton’s first co-angler win at an FLW event.

“It just wasn’t happening for me at first,” says Slaton, who fished on day one with Rockwood, Tenn., pro Derrick Blake. “I started out by mixing it up between a spinnerbait, a finesse rig and a craw bait before I figured out what they were biting. Derrick was throwing a spinnerbait along the bank, and I was following him with a Senko and a Fluke, and nothing was really happening for me. I got to thinking that with the banks coming up 7 to 9 feet, those fish are going to be out there in 10 to 12 feet of water.”

Slaton decided to start dragging a Carolina rig parallel to the bank to target bedding fish he couldn’t see, but thought were probably there.

The gamble paid off when Slaton’s first fish turned out to be a 5-pounder.

“I believe it was bedding fish because I could feel them slap it, and then I’d drag it another foot and they’d bite it,” he says.

On day two Slaton fished with Merced, Calif., pro Jim Moulton, and with the exception of one fish caught on a wacky rig, Slaton stayed with a Carolina rig all day. The bite was much tougher on day two, but Slaton says he’d take the win any day.

“I didn’t have near the weight that I did on day one, but I guess it was enough,” he says. “I can fish for a while on this. It’s good when you can do what you love to do, and basically do it for free and make a little money.”