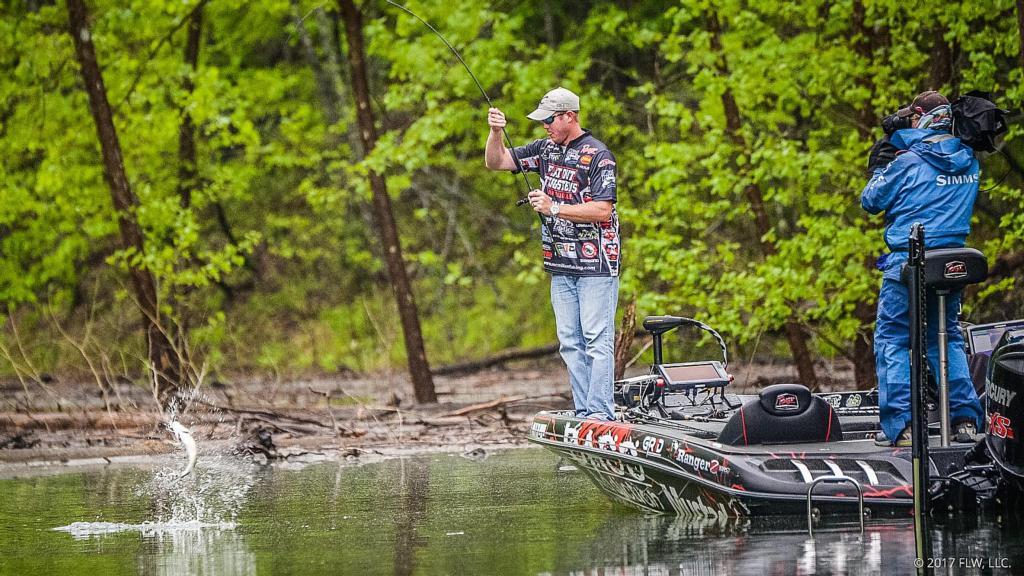 Instead of braving lightning, wind and torrential rain to catch his fish on day three of the FLW Tour at Beaver Lake presented by General Tire, Johnny McCombs just went ahead and caught his limit before the weather moved in. In fact, he had a limit by 8:30 a.m. and added two solid kickers by lunchtime.

Behind him are pros fishing a variety of patterns, but the shallow bite is certainly the primary deal among them. With waterfalls chugging at max capacity all around the lake and noticeable current in some creeks, plus stained and rising water, Beaver’s shallows are hot zones right now. Here’s more on how the top five made it to the final day at Beaver Lake. 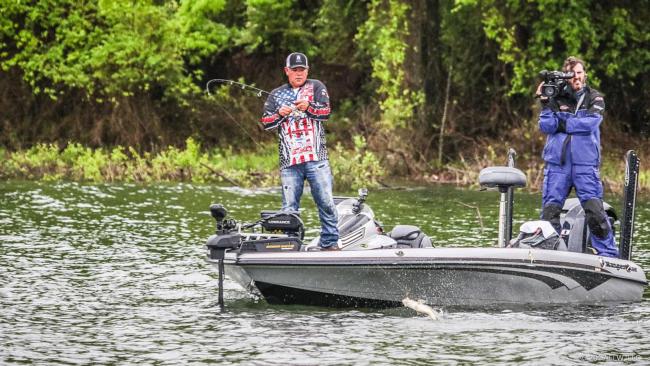 For the second day in a row, Huffman, Texas, pro Jason Reyes is in the runner-up spot and in good position to earn his first FLW Tour win.

Like McCombs, Reyes hauled in most of his catch early. Talking to emcee Chris Jones on stage at weigh-in, Reyes seemed confident in his chances to catch McCombs if he can repeat the early success tomorrow.

“If they fire like they did this morning, you never know,” he told Jones.

Reyes weighed in 11-3 today, which is 3-6 less than on Friday. The only thing missing was a kicker.

“I caught fish out of all those areas [from yesterday], but never had that clutch fish like I had the other days,” he says.

A kicker will be critical tomorrow, he thinks, because Reyes believes no one can win without putting together at least 12 or 13 pounds.

A shaky head was a go-to tool for him today, but he also caught fish on topwater, a swimbait and with flipping baits, depending on what the cover in front of him required. Those “requirements” changed a little due to all the runoff pouring into the backs of creeks from Friday night and Saturday morning’s storms.

“Really a lot of the cover I was fishing was starting to disappear under water,” he says. “I had to just cast around a little bit more. I couldn’t target-fish like I had been.”On Friday, Reyes revealed that he was targeting the old shoreline from before the water came up. He did the same today even though there was temptation to move into newly flooded cover.

“It’s hard to give up [on the old shoreline] and fish new water after having caught so many out from the bank,” he says. “Up there [in the newly flooded areas] is just like a jungle. I’m trying to stick with what I have confidence in.” 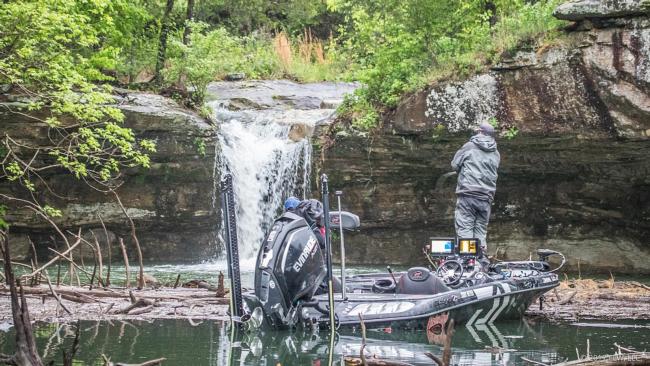 Normally when a pro takes the early lead in a tournament and then claims that he doesn’t know if he can repeat in the coming days, he’s sandbagging. Cody Meyer made a similar type of claim on days one and two, when he led the tournament, but he was being completely honest. He knew his best spots were losing steam.

The California pro waylaid deep smallmouths on day one and added a shallow largemouth kicker for first place, managed another smallmouth limit and kicker largemouth on day two to maintain his lead, and then slipped big time – as he suspected – on day three to drop to third. Meyer’s limit today weighed only 6 pounds, 13 ounces, and it included three spotted bass.

Meyer’s struggles were three-fold: First, his deep smallmouth deal is done. Second, the release fish in Prairie Creek that Meyer had hoped to lean on hard today weren’t there in the morning, though he did catch a limit fish and cull fish in the final minutes from Prairie Creek. Third, he hasn’t been fully able to figure out the shallow flipping bite around waterfalls and other inflows, logjams, laydowns, and sawdust in the lower end of the lake despite testing that pattern each day. However, he’s not giving up on that third option.

“I am intrigued by that stuff,” he says. “I think a guy could literally go flip that stuff and kind of pray for a big bite. I know there are big ones in there. There’s gotta be. It’s something I’m definitely going to keep doing, but I didn’t really learn anything about it today.

“Going into tomorrow I’m just going to go fish a bunch of new water and a bunch of stuff I haven’t tried yet. At this point I have nothing left.” 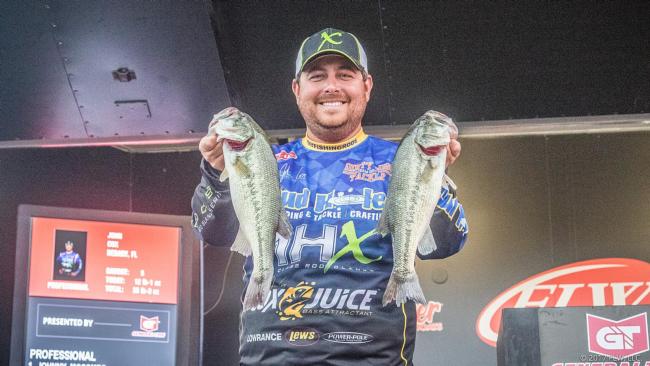 Bryan Thrift might be the hottest angler of the season, but John Cox is having one heck of a spring, too. He finished third at the Tour event on the Harris Chain in March, won the B.A.S.S. Southern Open on Lake Chickamauga last week and finds himself in fourth place going into the final day at Beaver Lake with a 35-pound, 3-ounce three-day total.

Cox is the master at running and gunning without a pattern and seemingly always scrapes together a good limit, particularly when there are a lot of bass up shallow. This week, he’s doing exactly that at Beaver Lake. He started the tournament sight-fishing, but that program fell apart after day one, and he’s been figuring it out day-by-day ever since.

“There’s no telling what I’ll do tomorrow,” Cox says. “Every day when I’ve gone out there, I’ve had no idea what I was going to do. As I made my stops, I adjusted.

“Today I just fished all day and got lucky,” he adds. “And I made almost 9 million casts with a spinnerbait.”

Cox is certainly capable of catching a big stringer on the final day, particularly since some of his better areas will be less crowded. Today, he shared those stretches with other top-20 pros. He plans to troll as fast as he can and junk it up in usual Cox fashion. 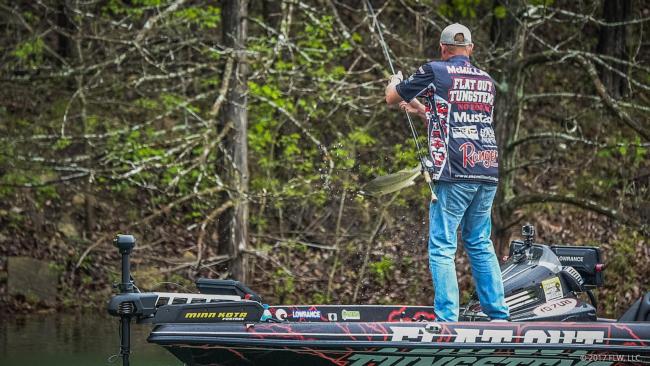 Yesterday, the Sunshine State’s Brandon McMillan told reporters that he had seen a lot of schooling activity in some of his better areas. Today, he was better prepared for them when they came up feeding at the surface.

“I pulled into my best spot and fished all the way back and didn’t get a bite, but when I got to the back they were schooling,” he says. “I was ready for them this time, so when they came up I could capitalize on them.”

McMillan quickly put four spotted bass in the boat with a Yo-Zuri topwater. Confident with what he had at that point, McMillan went looking for a kicker and finally ran into a 3-pound largemouth that he caught flipping. He says his two best fish came from new water that he hadn’t fished previously in the tournament.

After landing the kicker, it was time to play dodgeball with the storm as McMillan worked his way back up the lake to Prairie Creek.