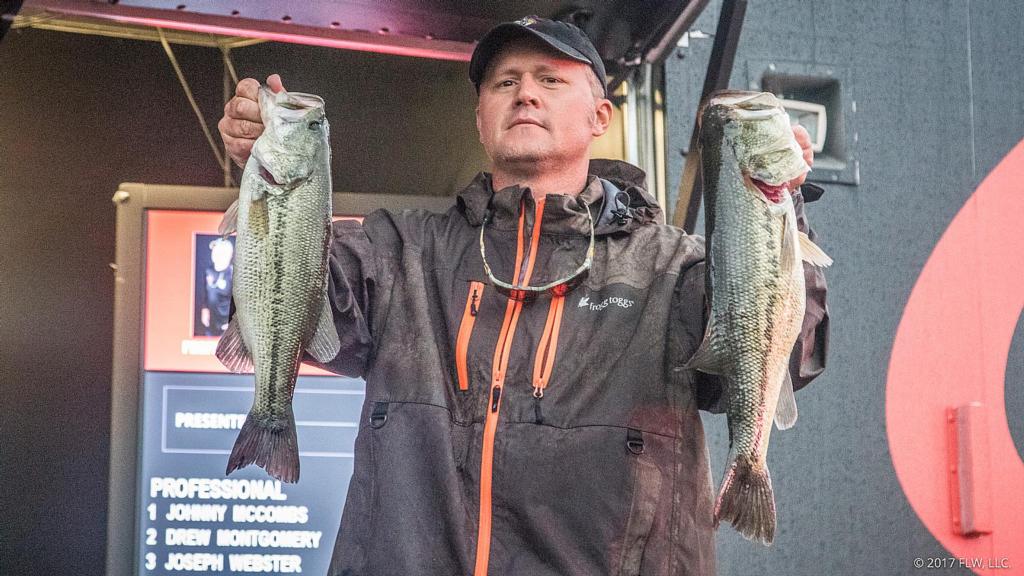 In the Rogers area in northwest Arkansas, the story of the day was the series of severe thunderstorms that washed through the region overnight Friday and again on Saturday morning and afternoon. The result was flash flooding that swept debris across roads and caused many low-lying areas to become impassible. Downed trees and power lines also caused headaches. Currently, the entire area is a saturated, mucky mess.

But not all was gloomy in Rogers on Saturday. Out on the water, Alabama pro Johnny McCombs was writing his own story at the FLW Tour event presented by General Tire at Beaver Lake. McCombs, who’s fishing the Tour in 2017 for the first time since 2003, pounded out an 18-pound, 15-ounce limit – the best of the tournament so far – to race from 11th place into first going into the final day of competition. McCombs’ 41-13 total has him in front of Texas pro Jason Reyes by 2 pounds, 4 ounces.

One of the keys to McCombs’ success today was getting off to a fast start before the worst of the storms rolled through shortly after lunchtime. McCombs started fast with three quality fish, limited out and then caught a giant that keyed his limit at about 10 o’clock. Once the afternoon boomer commenced, McCombs and his marshal, along with a couple of media boats, took shelter in a dock slip for a couple of hours until a brief respite before weigh-in gave him a chance to finish out his day. 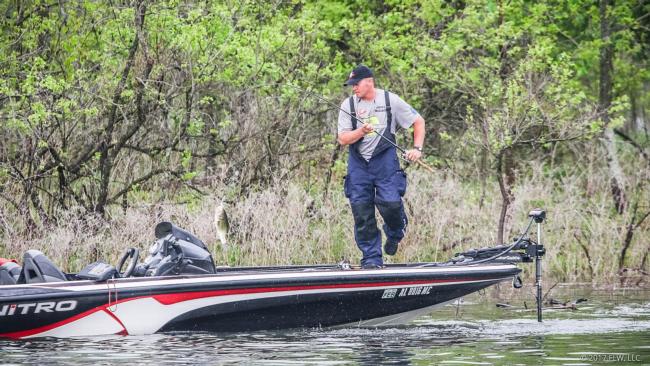 McCombs says he is dialed in on a pattern that he was able to run more easily today because there were fewer boats on the lake, which hurt him on day two, when he weighed 8-11 to go with 14-3 that he caught on day one.

“The second day I was struggling, but I think they had been fished out,” he says. “I had a little clear area upriver, and that was key.” 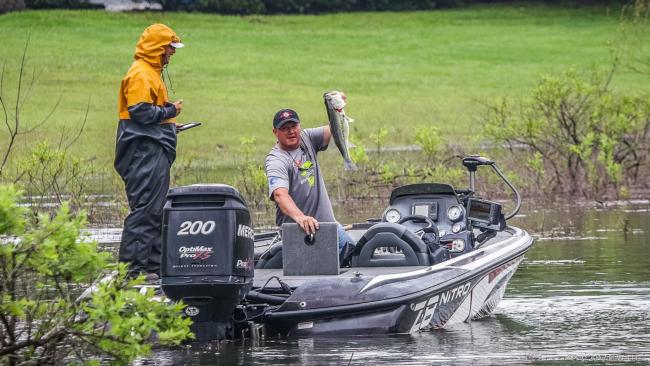 McCombs won’t say what he’s using to catch his fish, but he did say that he’s fishing fast and fishing on the inside edge of flooded bushes.

“When the water gets up, I always fish behind the bushes,” he adds.

The pattern held up today despite the change in conditions, and McCombs was able to expand in a new area close to takeoff. He plans to expand on it again tomorrow when he and the rest of the top 10 finish out the stop No. 5 of the 2017 FLW Tour.

“I can ride around and see what I’m looking for [along the shoreline],” adds McCombs. “I’m fishing all new water.”