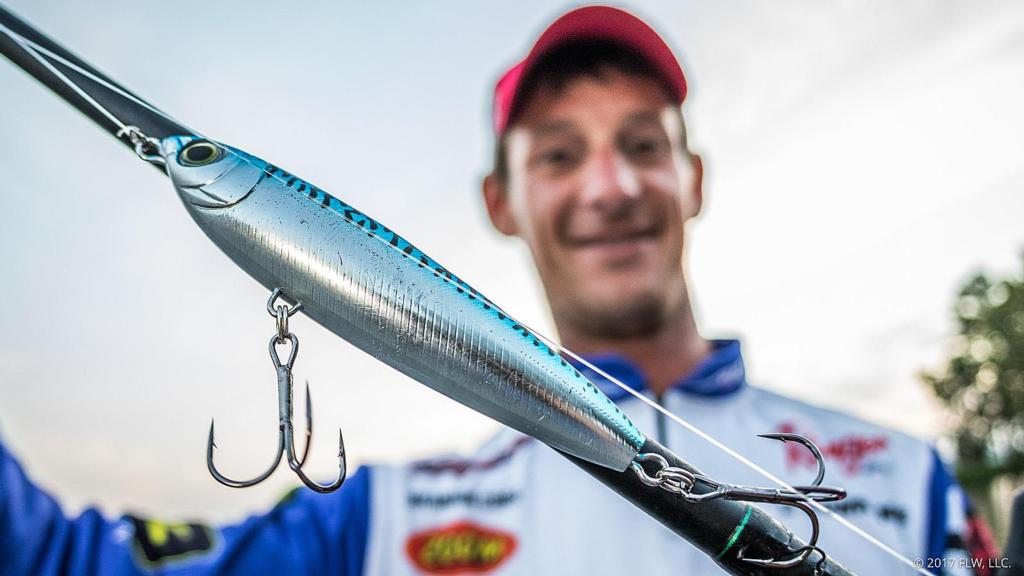 Dialing in on surface activity – or near-surface activity – for bass that were chasing blueback herring seemed to be the key to success at the 2017 Forrest Wood Cup on Lake Murray. Late-summer largemouths were often relating to brush or cane. Anglers either “called them up” with jumbo walking plugs or capitalized on visible surface activity to get bit.

Here’s what the top 10 threw to make it happen. 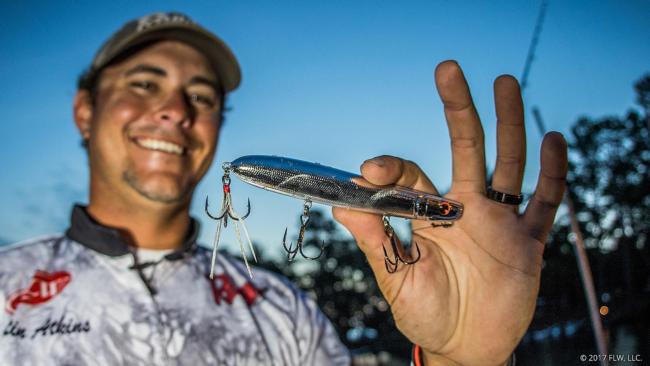 1. Tournament champion Justin Atkins targeted herring-eating bass and caught all 15 of his weigh-in keepers on one bait: a chrome ima Little Stik 135. On day three, he actually lost the Little Stik that he’d used on days one and two, and he unwrapped a new one to finish out his title run. 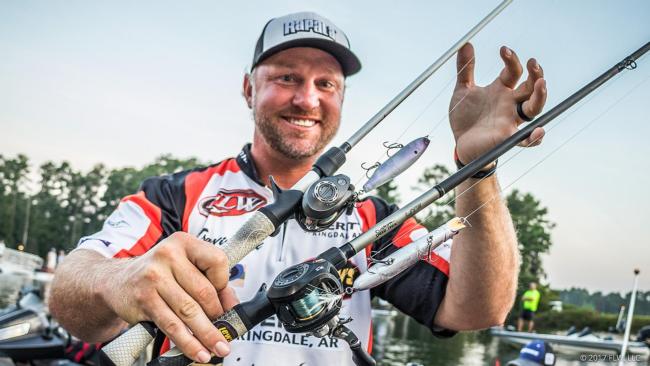 2. Travis Fox came up a little shy in his bid for a Cup victory. Unlike many others who played the open-water topwater game, he wasn’t keying on brush, but instead fished points. For the first two days he relied mostly on an ima Little Stik 135 in the American shad color with the stock hooks swapped out to VMC trebles. When the fish refused to bite it on day three, he caught his biggest fish with a Strike King Sexy Spoon. Fox was turned onto the spoon by a keen observation at a tackle shop. Essentially, there were so many spoons in the store that he figured they had to be productive baits on Murray. He was right. His other change on the final day was to swap the Little Stik for a Storm Arashi Top Walker in ghost pearl shad. 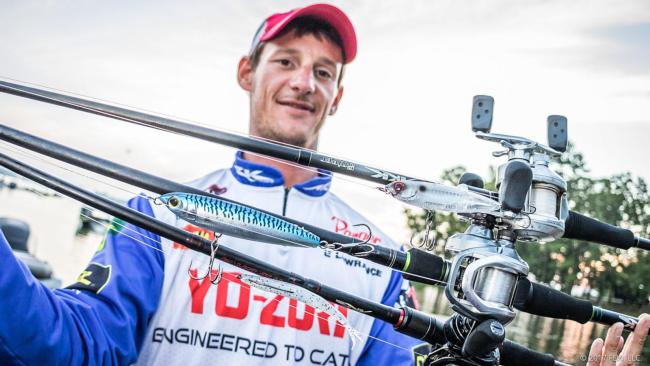 3. Brandon Cobb, one of the in-state favorites, made his third consecutive Cup top 10 this week with a variety of baits. His primary tool was a Yo-Zuri Hydro Pencil, which is actually an inshore walking plug, but he replaced the stock saltwater hooks with lighter-wire freshwater models. On the final day, he added a Yo-Zuri 3DB Pencil in prism ghost shad and Yo-Zuri 3DR Pencil in glass minnow, and wound up catching most of his keepers on a Zoom Super Fluke in a shad pattern with glitter. A last-ditch effort on day three to fill his limit with a drop-shot produced only a catfish. 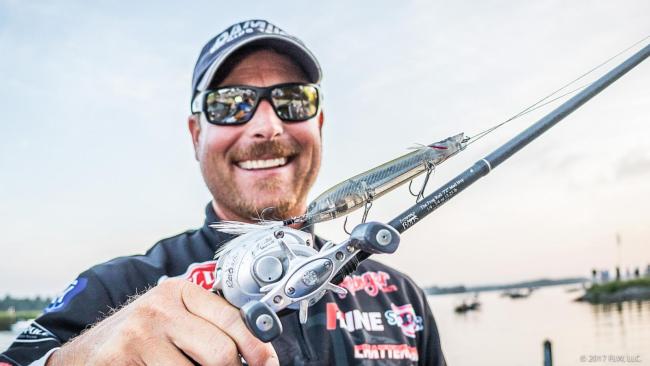 4. Bryan Thrift played the topwater game with a Paycheck Baits The One pencil popper, but he did a lot of damage with a 10-inch Texas-rigged worm fished in brush piles. On the final day, he caught three keepers on a Damiki Finesse Miki rigged on a shaky head. 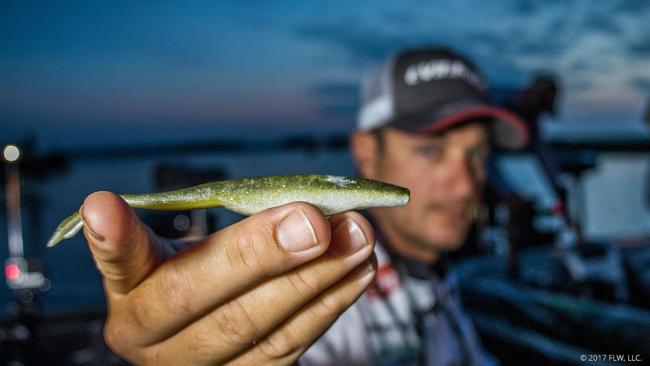 5. Like the last time the Cup was held on Murray, Anthony Gagliardi put into play a Yamamoto D-Shad. He mostly threw it on a single rig, but fished a double rig on the final afternoon. His only other bait was a chrome pencil popper. 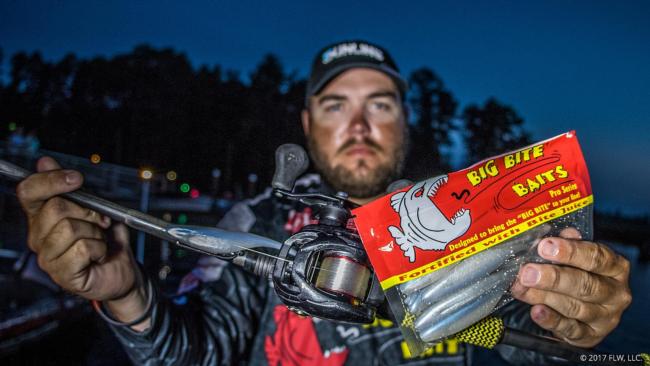 6. The “Real Deal” Michael Neal fished a Big Bite Baits Jerk Minnow in the alewife color. He rigged it with a swivel up the line and a weightless 5/0 round-bend Gamakatsu hook. The Dayton, Tenn., pro, who’s made the top 10 in two consecutive Cups, says he also caught one keeper per day on an ima Little Stik 135 in the American shad color. 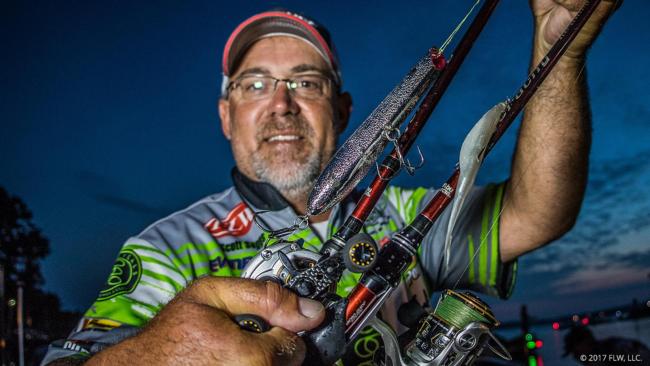 7. Suspended bass expert Scott Suggs did what he does best in late summer and made the top 10 with a chrome Cotton Cordell Pencil Popper and two Zoom Super Flukes, one in crazy chrome and one in albino. He rigged each Fluke on a single-bait rig with a weighted hook. 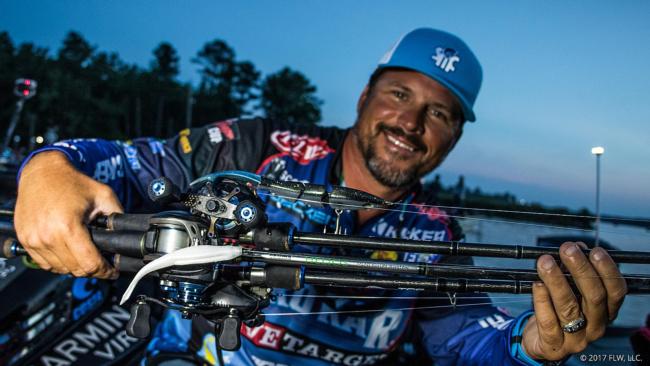 8. Scott Martin caught fish on a variety of baits, and none really stood out above the rest. Among them were a topwater walking bait made by LIVETARGET, a white Yamamoto D-Shad soft jerkbait and a small pencil popper. Shown at top in the photo is a jointed swimbait that he also experimented with on the final day, though he says he was unable to catch a keeper with it. 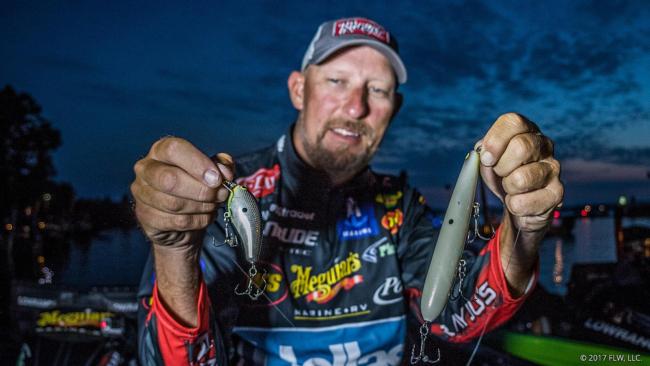 9. Figuring it out during the tournament was the key to Wesley Strader’s finish. On day one, after a tough start, he went upriver and landed a good bag with a PH Custom Lures Pooh shallow-running crankbait and a 3/8-ounce chartreuse/white Stan Sloan’s Zorro Bait Co. Wesley Strader Signature Series Bango Blade with a silver No. 4 1/2 Indiana blade and gold No. 3 1/2 Colorado blade. For herring-eating fish, Strader fished a prototype bone-colored pencil popper made by PH Custom Lures. “It’s made out of real heavy wood,” he says. “I call it the ‘Jabberwocky’ because it throws water like crazy and you can throw every bit of line off your Lew’s reel with it.” On the final day, Strader landed one keeper while flipping a Zoom Z-Hog in some grass. 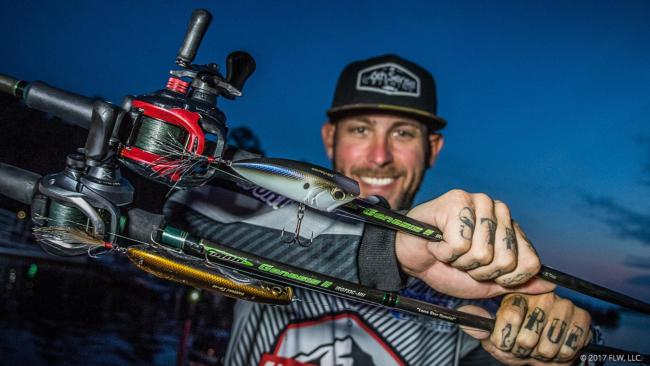 10. Tenth-place finisher Aaron Britt threw a soft jerkbait here and there, but his primary approach was to fish two topwater baits: a 6th Sense SplashBack 90 popper in the 4K shad pattern and an Ever Green SB-125 pencil popper in the half mirror wakasagi color.