Kicking Off Practice with Schmitt 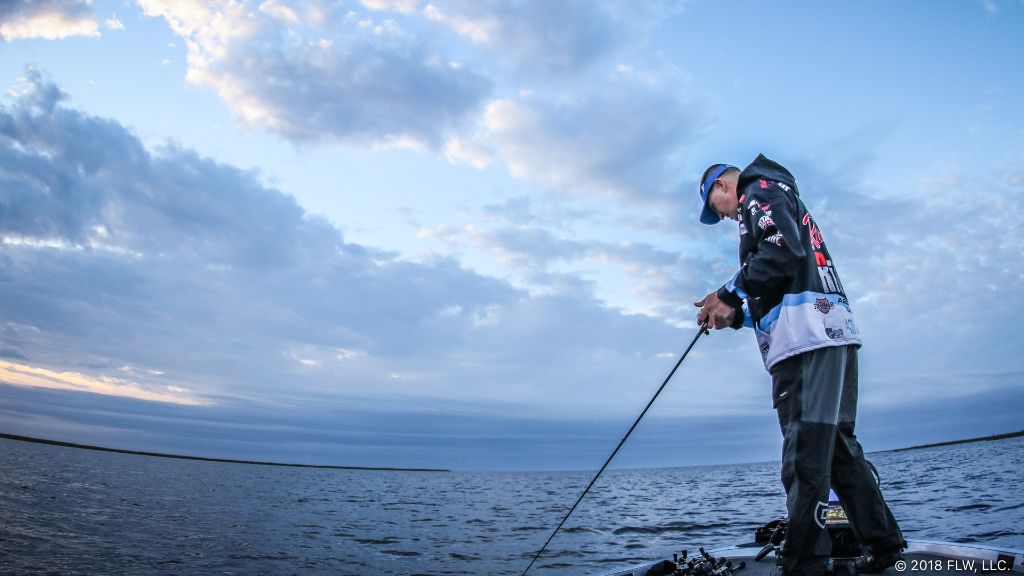 Coming off a fourth-place finish in the Costa FLW Series season opener on Okeechobee, Bryan Schmitt has many eyes on him this week for the FLW Tour opener in south Florida. Slinging a vibrating jig has accounted for plenty of good finishes over the years on the Big O, and Schmitt is one of the best in the world at it. Anytime he’s around grass the Maryland pro is a threat to win, and he’s looking to start the season strong after his best year yet on Tour in 2017.

With all that in mind, I jumped at the chance to hop in the boat with the soft-spoken and friendly pro for a look around Okeechobee. 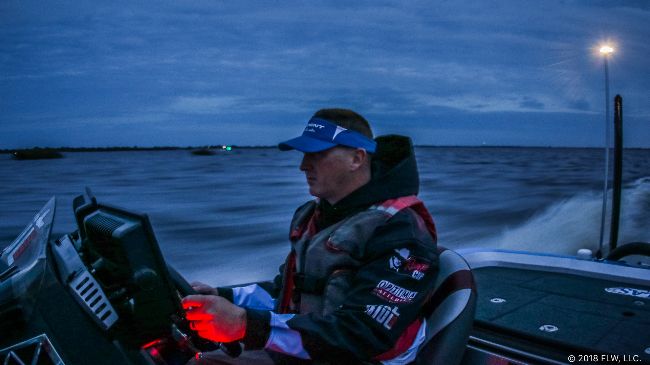 We meet in the dark on the north side of Okeechobee, where Schmitt waits for the appointed start time of practice and then rolls out, heading back toward where he left off in the Costa FLW Series. After a short run, he begins to idle over some submerged hydrilla as the sun rises.

“Well, the good news is the grass hasn’t left,” says a contented Schmitt before breaking down his strategy. “The offshore grass has shrunk up here and in Harney Pond. I think it’s about a twentieth of what it was. In my mind, anywhere else that happens, the mother lode should be on what’s left of it.” 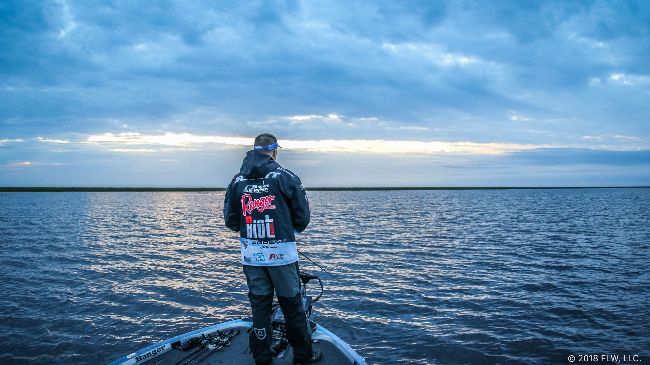 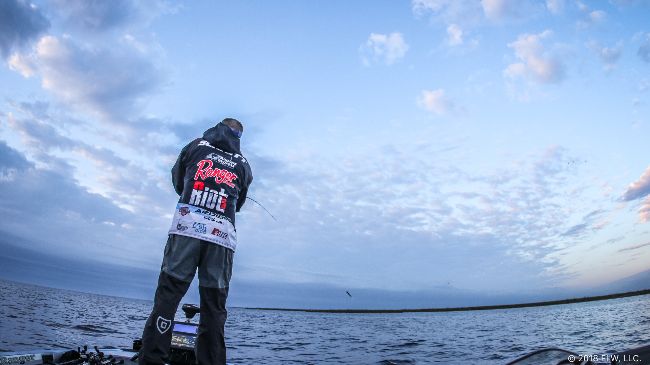 After a little more idling, Schmitt stops, pulls out a few rods and starts fishing, methodically working his way with the light breeze over the grass. As expected, he’s started the day with a vibrating jig.

“I might change, but I’m going to push this as much as I can, at least today,” says Schmitt, who has the warming weather very much on his mind. “It [a good finish] is going to [happen for] whomever lands on them Tuesday afternoon or Thursday morning. We just need a couple hints now. That’s what’s cool about this game.” 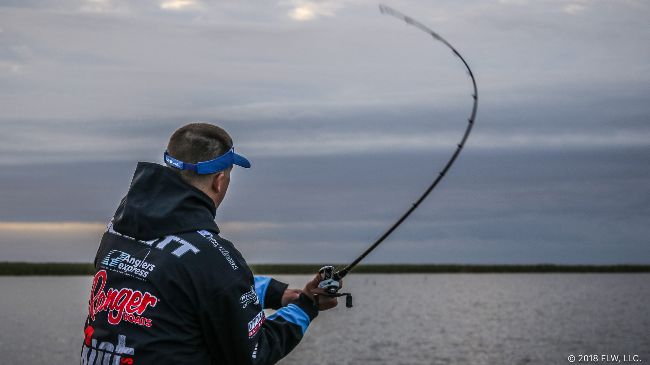 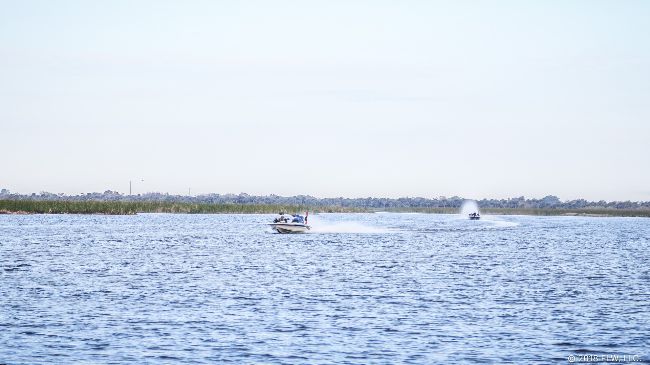 About an hour later, Schmitt hasn’t had a nibble, and it’s time for a short move to another section of good grass. After a brief idle over it to check on things, he digs out a rod rigged with a soft-plastic stick bait, stashes it on the deck for later, and goes back to work with the vibrating jig. Now, with the sun fully up and the force of an FLW Tour practice coinciding with a lovely Sunday to fish, the lake is starting to get busy. There are boats all over the place, fishing for bass and crappie, and hunting ducks. Unfortunately, the traffic might be picking up, but the action isn’t.

“Well, this is very disappointing to not even get a bite,” says Schmitt at 8:40 a.m. “But, I’m still going to have to check this later in practice.”

At exactly 8:41, Schmitt gets the first definite bite of the morning and then continues fishless for another half hour. 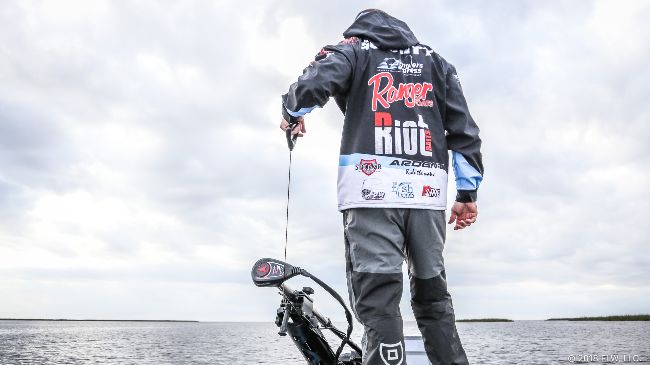 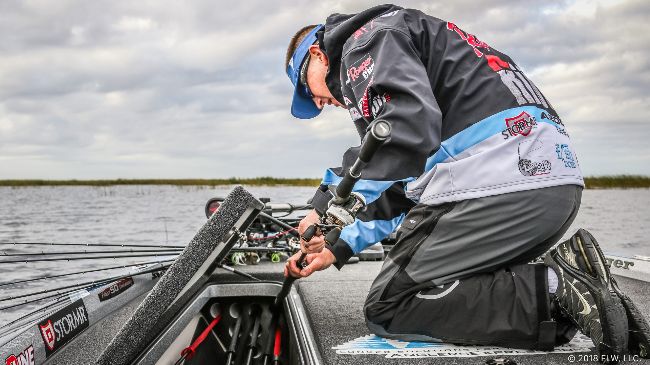 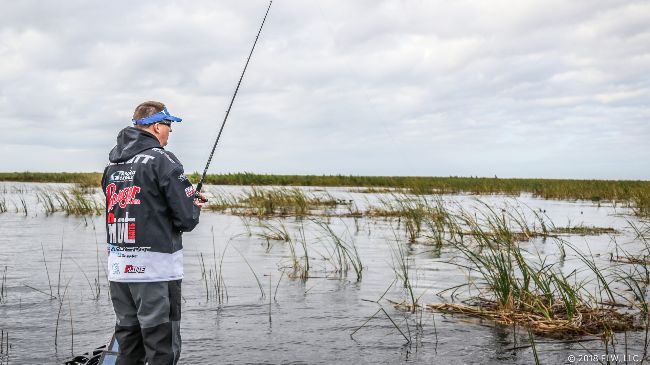 His next move is shallower, into some of the slop that Okeechobee is known for. Schmitt pulls a big stick out of the rod locker and goes to work. He flips his stick bait at some sparser stuff and drops a creature bait into the thick of it. He’s not wild about fishing this shallow with the weather still fairly cool, but he’s not one to leave things undone if possible. Unfortunately, this shallow foray is just as unsuccessful as the rest of the morning. 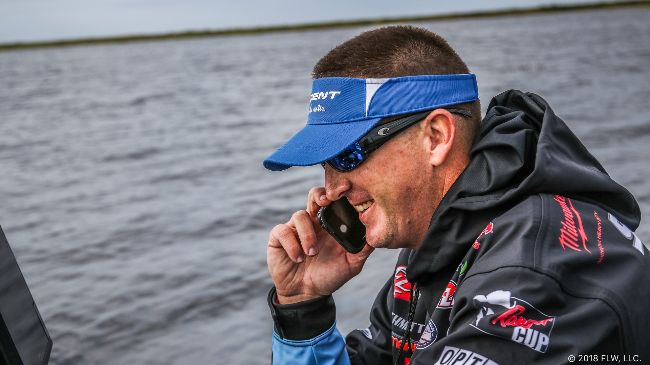 Schmitt works his way back out to the submerged grass and fishes along for another 15 minutes or so before sitting down to give Billy Shelton a call. A fellow Tour pro, Shelton rooms with Schmitt, as do Bradley Hallman and Kurt Dove. The four of them share at least a little information. It turns out that Shelton isn’t up to anything much either. He’s caught some keepers, but nothing of note. 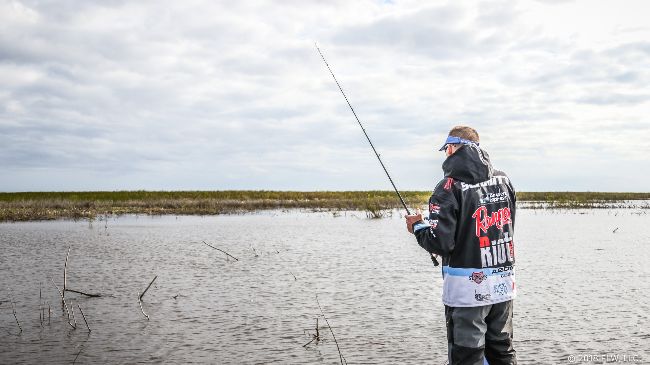 Putting his phone away, Schmitt cranks up and makes another move, this time to some flooded brush in water that frankly looks like chocolate milk. It doesn’t seem like an ideal Okeechobee scenario, but he’s covering all his bases. Pulling out a black and blue vibrating jig, he goes to work – again with no results. 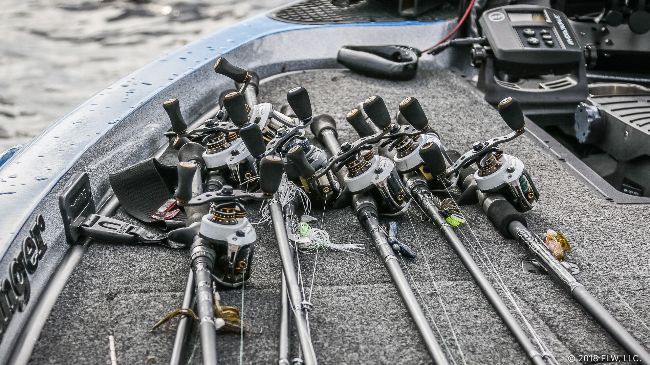 Some pros have decks that look like veritable tackle shops in practice, but Schmitt’s is still relatively clear, even midway through a fishless morning. Between some winding baits and flipping baits, he’s got a pretty solid group of Okeechobee staples at the ready. 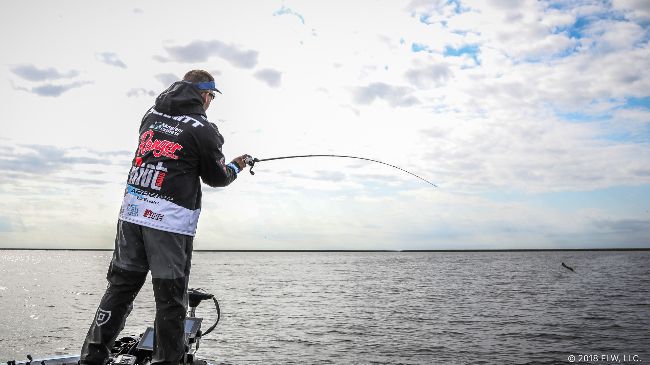 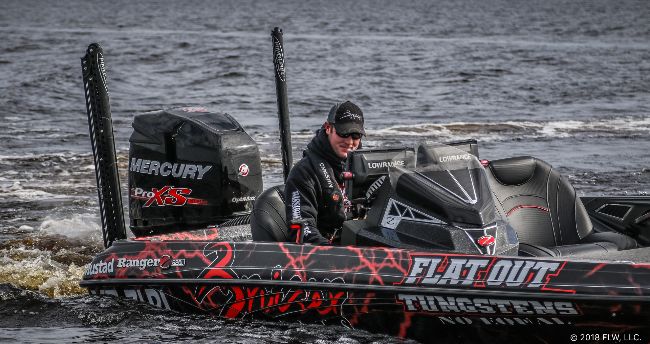 Around 11 o’clock Schmitt ditches the brush bite and runs back toward the ramp, stopping on another likely looking section of submerged grass. After another idle over it, he begins fishing.

A few minutes in, Schmitt is interrupted by Brandon “Big Mac” McMillan, who rolls in to check on things. After complaining about the fishing conditions for a bit, McMillan reveals that he’s caught two bass so far and says this is the cleanest water he’s seen all day. It’s no shame to have McMillan beat you on Okeechobee, but nonetheless, Schmitt is starting to wish for a fish. 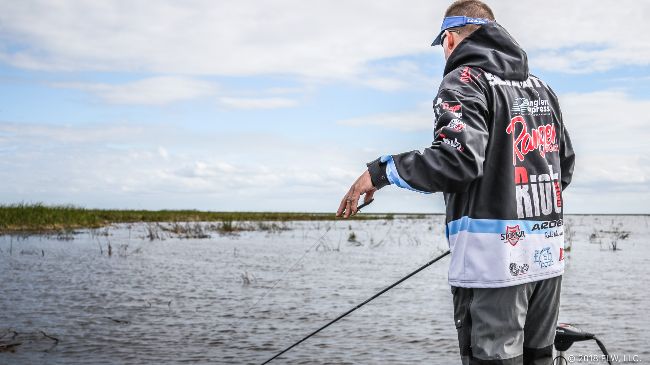 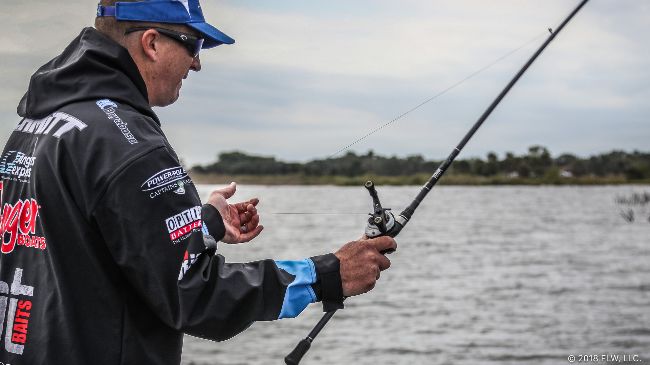 Schmitt finishes out the grass patch without a bite, then makes two more quick stops on brushy areas. In one, you can see the effects of hurricane season on the cattails. Not only have they been pushed from their usual position, but you can see the old, dead stalks piled up from the flow of the wind and waves. Flipping and chattering along, Schmitt gets hung a lot, but never on a fish. 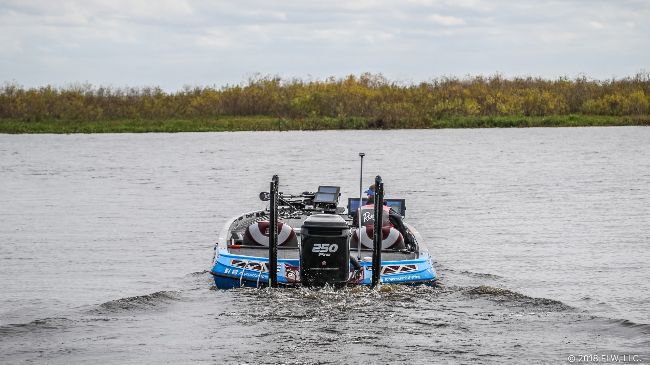 At noon, the Maryland pro drops me back at the ramp. It’s not been the start he wanted, but there’s a lot of time left, and his confidence seems intact. You don’t win as many derbies as Schmitt has by getting down on yourself, and three days is a lot of time to find some bass.