The last morning of practice on Okeechobee with the Tin Man 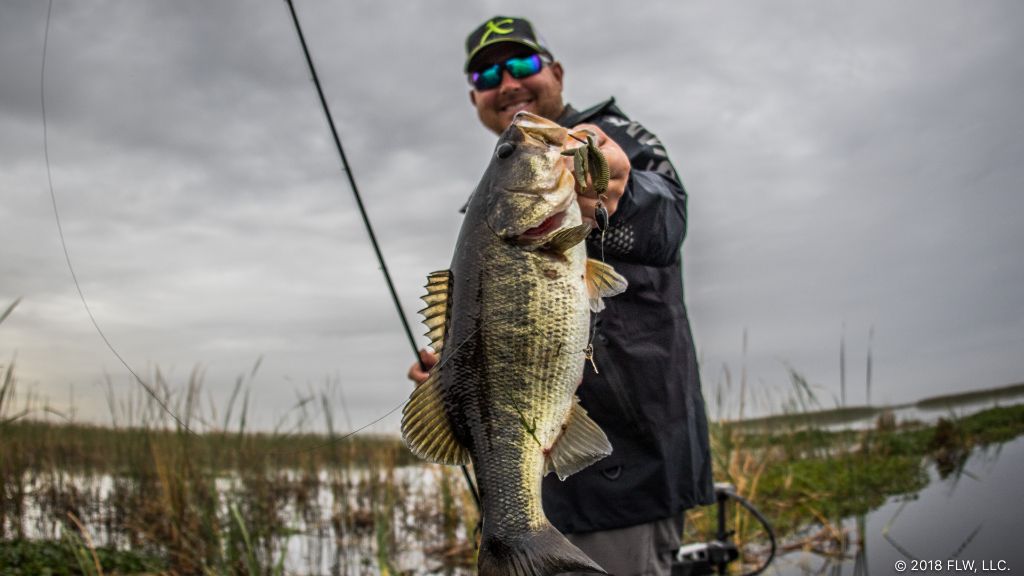 John Cox is a transcendent angler, but there’s no part of the country he’s better suited for or has more history in than Florida. Though he’s at home in DeBary, Florida on the St. Johns River, Cox has caught ‘em all over the Sunshine State – this year, Okeechobee isn’t her usual self, so day three of practice found the 2016 Forrest Wood Cup champ still putting the pieces together.

Seemingly always happy to have more company in the boat, Cox let me tag along for the final morning of practice before the FLW Tour season really gets underway. 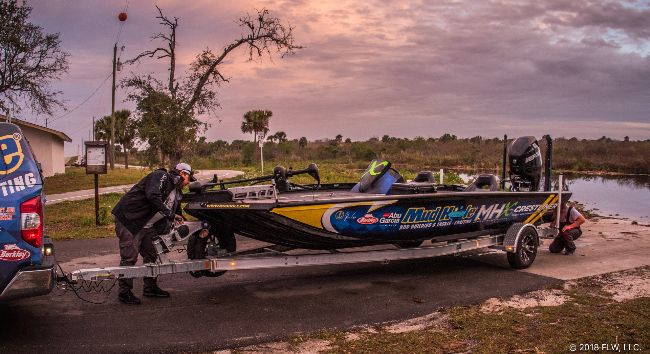 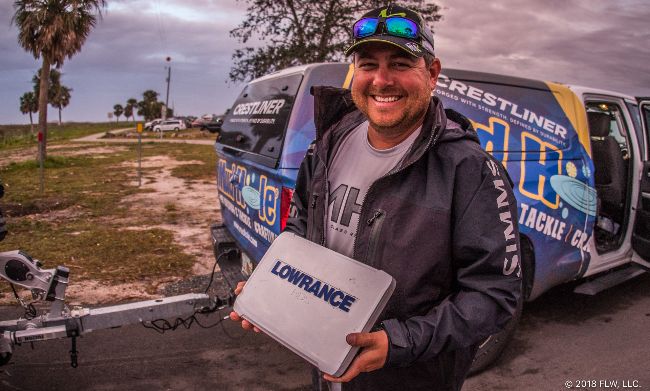 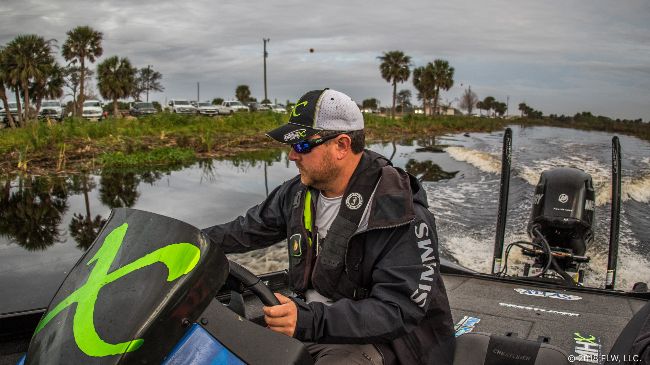 I meet Cox and his co-angler practice partner Benjie Seaborn bright and early at Harney Pond. Instead of launching with the rest of the crew, Cox opts to utilize a ramp specially laid out for air boats, and gets things ready with nobody rushing him. This year he’s got some extra mapping help in the form of a 12-inch Lowrance HDS unit, but true to his simple shallow style he’s down on the transducer side as usual, having ripped it off early on in practice.

After parking the truck and getting everyone bundled aboard, Cox cranks the motor and heads for the lake. 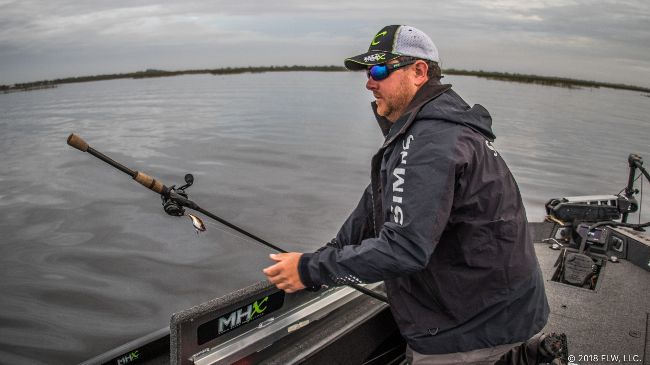 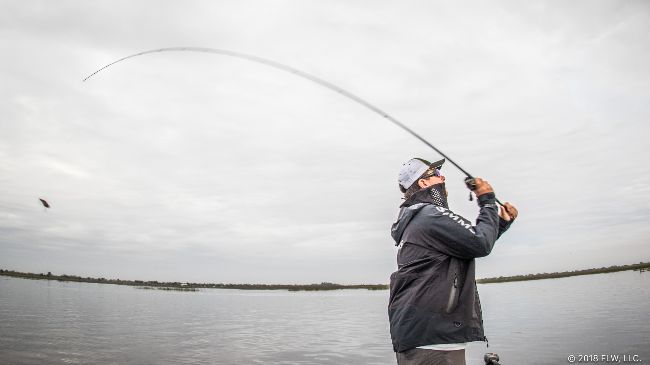 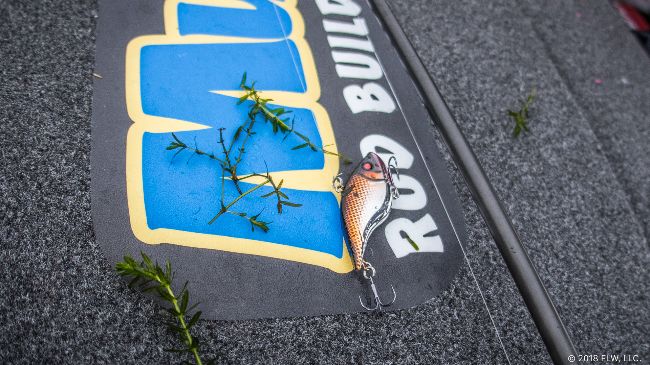 Our first stop is – surprisingly – not way back in the reeds, but actually a hydrilla bed in open water. Handing a vibrating jig to Seaborn, Cox pulls out a lipless crankbait and begins slinging around in the grass as a few other boats filter into the area around him.

“I kinda hope some of these guys give up on these areas and they move in,” says Cox, who is convinced that a big wave of fish has yet to push toward the spawn. “There were about 50 boats in here the other day, and this is about all we’re going to do out here, but it’s almost like they haven’t even been up shallow.”

After a few more casts, Cox changes to a ¼-ounce lipless to get over the grass better. After another dozen tries it’s time to roll. 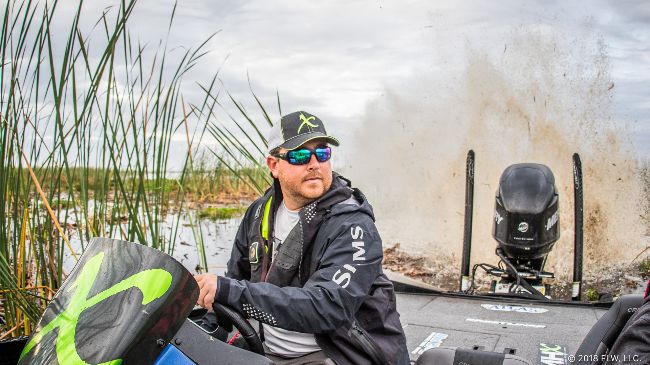 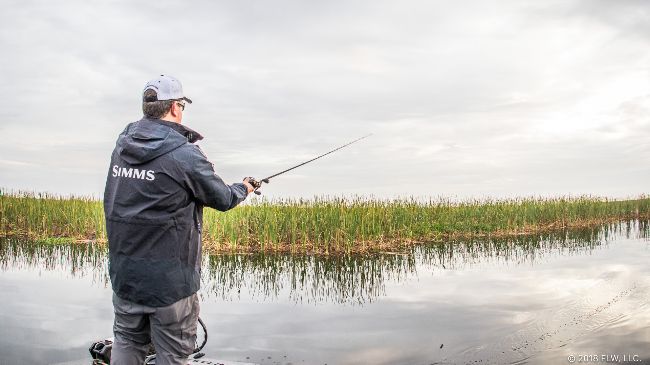 Now it’s time to do some John Cox things. After a short run on plane, Cox swings into the forest of cattails and begins four-wheeling back into a string of protected ponds. Once inside, he pulls his swim jig rod from the locker and start searching for fish, hoping to draw a follow or a wake to reveal the presence of winning fish.

“It looks amazing back here,” says Cox. “We came to the right water.”

It sure does look good, but after drawing one follow in 40 minutes of winding between little ponds and gaps, things are looking bleak. 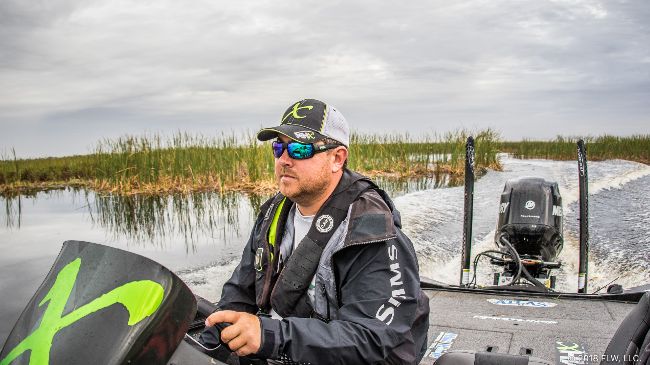 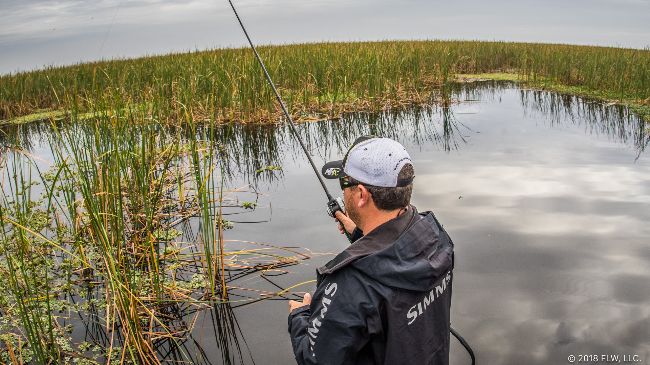 After exhausting his backwater, Cox cranks back up and makes a move, heading well out away from the ramp. It’s apparent he takes pleasure in piloting his boat in and out of tricky situations, and he’s also an expert at it, knowing exactly when to trim and when to pause to clear the prop along the way.

After speeding across the lake to another area on the north shore, Cox settles the boat down near a likely-looking line of cattails mixed with hyacinths and water lettuce and pulls out a flipping stick – his third rod of the day.

“I’m so convinced they have to be here,” Cox explains as he starts flipping. “We fished it forever the other day and didn’t get a bite, but…” 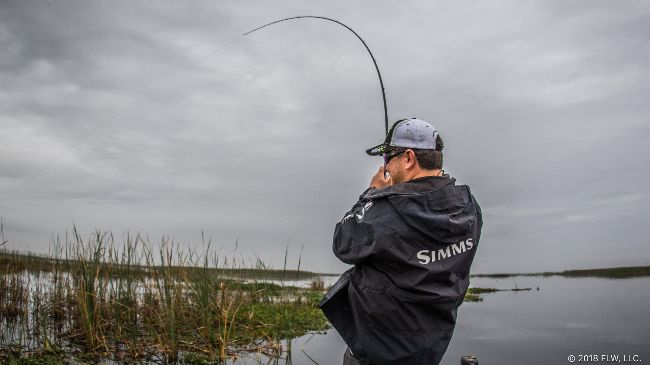 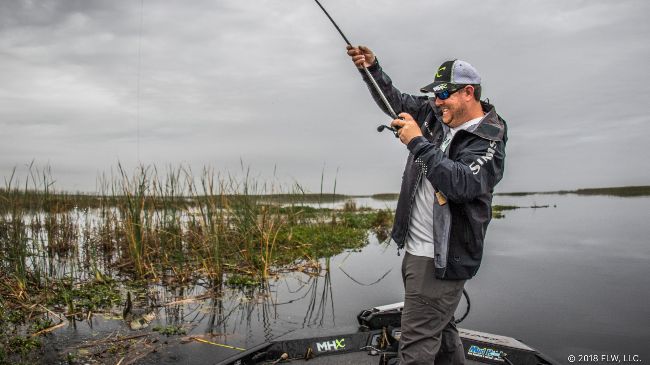 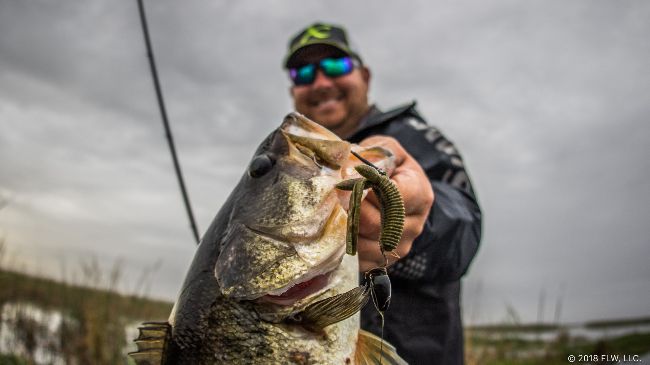 They’re here. After getting two very light bites, Cox resolves to set the hook on the next one. The next bite comes at about 8:40 a.m. ET, and he makes the most of it, wrestling a chunky 3- or 4-pounder into the boat for a picture and a quick release. With that, it’s time to stop setting the hook. 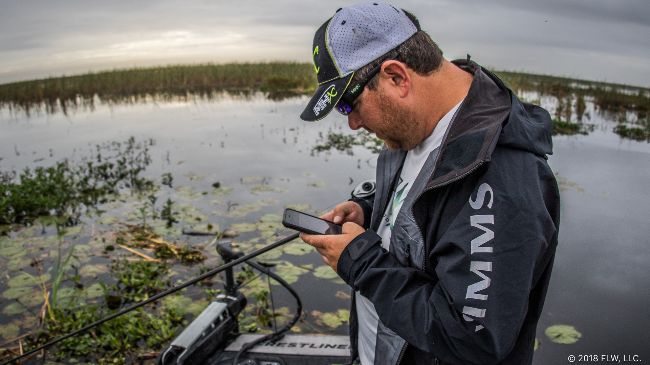 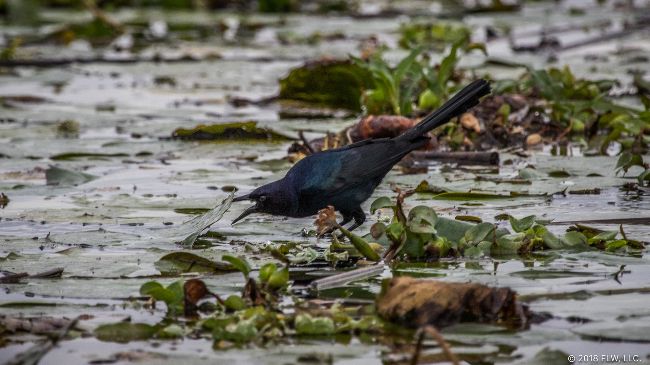 Slowly but surely, Cox expands on his area, moving from alleyway to clump to point, dropping his bait into every likely looking mat. He seems to be averaging a bite every 30 minutes or so, which is plenty for a tournament, but not very interesting without the corresponding hooksets and battles.

In between patches, Cox pauses to put in a Tackle Warehouse order on his phone (pros still have to buy tackle), and we get distracted by a bird that enthusiastically chases Seaborn’s worm through the pads before losing interest and searching for easier prey. 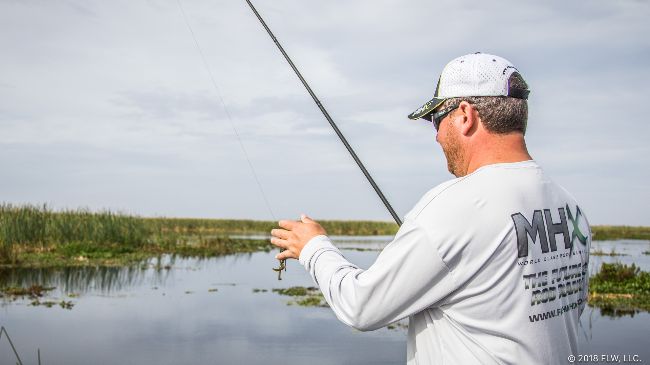 Still going without cranking the big motor, Cox peels off his raincoat as the day warms and gets another bite.

“There’s one!” he exclaims. “Those boys had better watch out. I think there’s barely any fish in here now, they’re still out on the lake somewhere, but that was another dandy.” 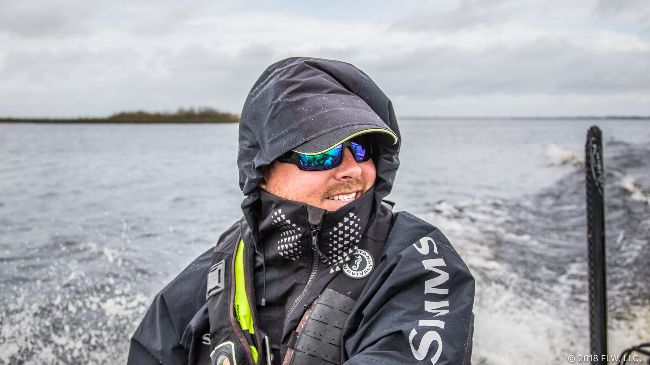 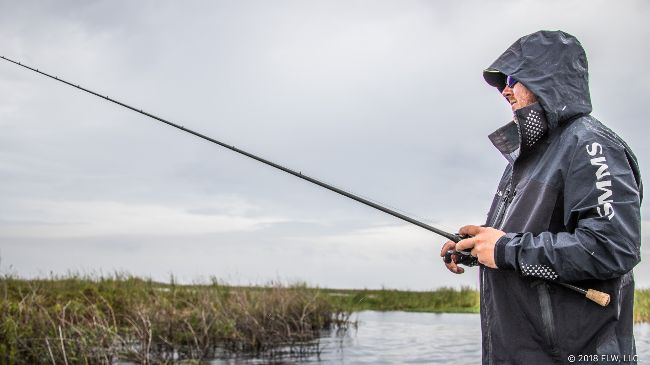 There’s rain in the forecast, and the signs begin to show right on schedule. After a little more flipping, Cox puts his coat back on and cranks the motor to move less than a half mile to another section of cover. He’s picking things apart far more thoroughly than is common in practice, occasionally having Seaborn punch in a waypoint when he gets a bite on a certain piece of cover.

“There might honestly be a stretch where you get one like every flip,” explains Cox. “That’s why I’m fishing so much. If you find that magic mat you can win off one place.”

A few flips later he gets another bite.

“Oh ho ho ho, that was a big one,” he says. “The flippin’ days are coming back. Before I learned to sight-fish this is all I ever did, I haven’t fished this part of the lake in a tournament since I was like 20, but it’s better than fishing in that dirty water all day.” 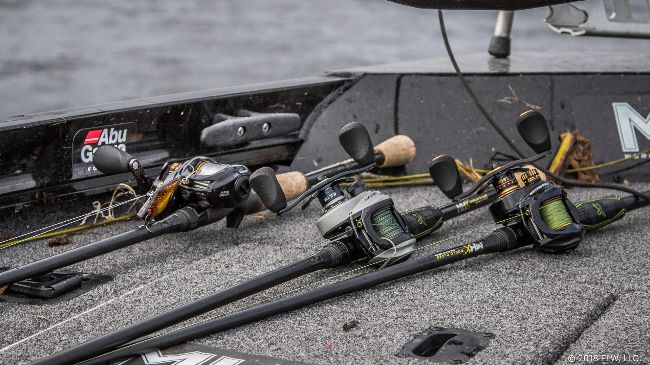 Throughout the day, Cox hands an occasional rod to Seaborn to try out, but he’s mostly keeping things extremely basic. The whole time, he’s casting either a lipless or a swim jig or pitching a creature bait on a big weight. All his rods are handmade by himself, but he says he needs to make a heavier one after practice in case his developing flipping pattern turns into something. 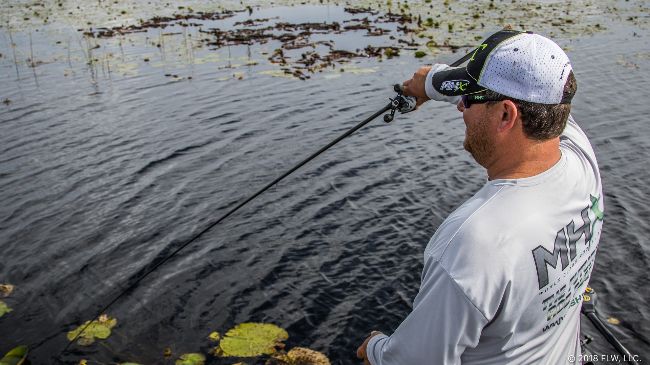 After another short move, Cox is getting hungry and flipping some patches of pencil reeds and mats that clump up along the edges of a big pad field. You can hear bluegill popping and it seems full of life, but there’s nary a bite to be found. It’s time to roll. 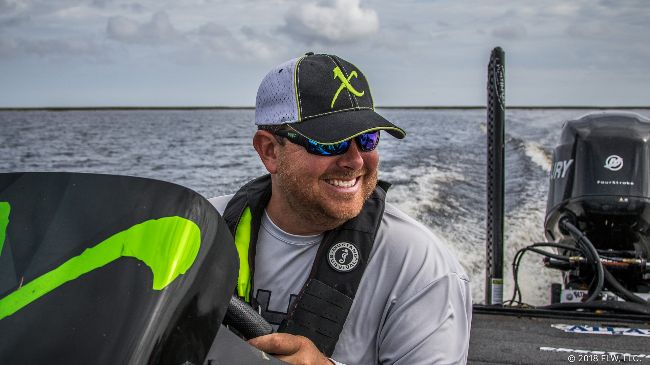 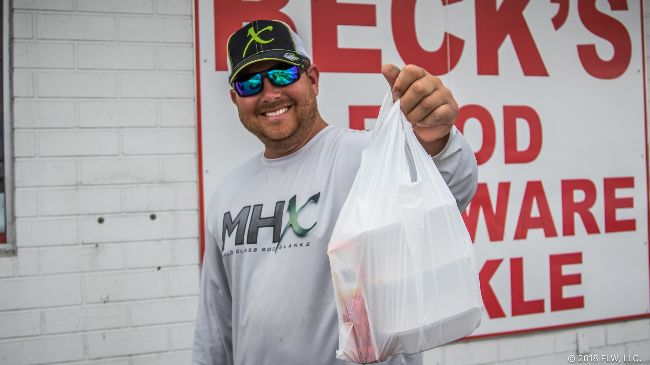 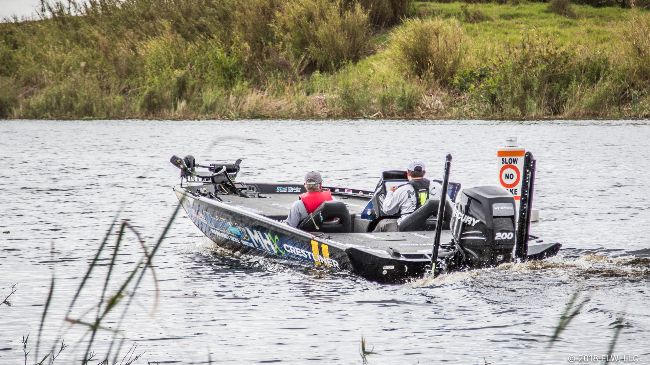 After popping back across the late through some light chop, we hit the bank in the canal and Cox leaves Seaborn with the boat. We’re going to fetch some lunch. A quick trip to the hardware/grocery store at the end of the road leads to barbecue sandwiches for the three of us, and then Cox and Seaborn head back out to finish off practice, having finally found a few fish willing to bite.