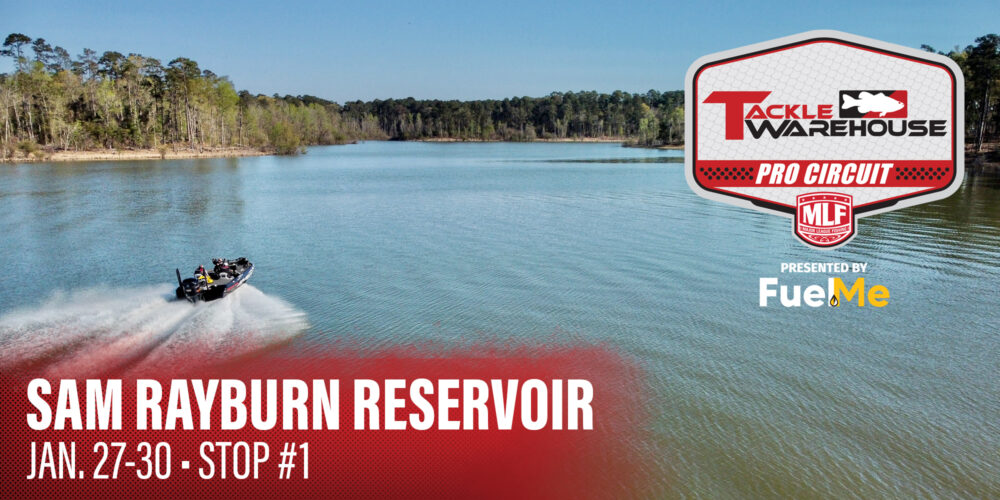 Kicking out some monster bags over the last few years, Sam Rayburn Reservoir is the perfect spot to start the 2022 Tackle Warehouse Pro Circuit presented by Fuel Me season. While the grass may not be as abundant as it has been, there’s still no shortage of fish to be caught and with the way MLF tournaments have played out the last few seasons in January, there certainly should be some fireworks.

If you aren’t familiar with Sam Rayburn by now, well, you need to pay more attention. Big Sam has long had a reputation as a phenomenal bass fishery and has been a giant in the tournament world, and it’s still living up to the hype. A quick glance back in time from recent MLF events will highlight the potential of the lake with Terry Bolton crushing 33 pounds, 9 ounces in 2019, Anthony Sharp’s 40-6 in a Cowboy Division BFL in 2020 and Derek Mundy’s nearly double 40-pound bags from his wins in BFL and Toyota Series events in 2021.

At more than 114,000 acres, it’s the largest reservoir contained entirely within the borders of the Lone Star State. The lake is a flood-control impoundment, so it does experience high- and low-water years, fluctuating roughly 7 feet throughout a typical season.

Dicky Newberry is one of the most knowledgeable Rayburn anglers in the field and though he’s a bit hesitant about the odds of seeing some megabags, he’s a firm believer the fishing should be solid throughout the lake.

“I think the cooler weather we’re having is going to group those fish up a little better instead of how they’ve been scattered over the last few months,” Newberry said. “I think everything is taking shape to be a typical Rayburn January tournament.

“We’re going to see a big variety of fish catches,” adds Newberry. “There’s going to be fish caught from 2 to 30 feet. There will be fish caught off of shallow wood and at the mouths of creeks since we haven’t had a lot of rain and the creeks aren’t blown out. There’s a limited amount of grass, the least I’ve seen in the past 25 years during this time of year, but there will still be good fish caught out of it. And there will still be a lot of fish caught on Carolina rigs, football jigs and crankbaits (offshore), which I think is where the bigger bags will come from.”

One thing Newberry is quick to point out that could likely hurt the overall fishing is the amount of pressure the lake will receive going into the weekend. Now, big tournaments aren’t uncommon for a place like Rayburn, but with a few hundred boats set to hit the water for local derbies, after the full Pro Circuit field has fished for two days, well, it surely can’t help.

“There’s just going to be so much pressure on the lake and it’ll hurt us,” Newberry said. “Because of that, you might see some guys try to find some fish away from the beaten path, and there are fish to be found. But I don’t think you could consistently do that for four days.”

When it comes to weights, Dakota Ebare and Newberry both agree that somewhere between 15 and 17 pounds a day will make the final day where weights will be zeroed. From there, it’ll likely take a 20-pound bag (or better) to win. Though there are some factors lining up that could keep it from being a Texas shootout, the fact of the matter is that there’s no better time of year for big things to happen.

“The chance of catching a giant bag, or even a giant bass, is better now than any other time,” Ebare says. “It’s always exciting going out on Rayburn knowing you may catch a 12-pounder. You always legitimately have that chance. January and February, that’s the best time to do that.”

With the water temperatures finally cooling down, Newberry has revitalized hope for a Bill Lewis Rat-L-Trap bite.

“Now our water temperatures are in the mid-50s and it’s Rat-L-Trap time now,” Newberry says. “That might play bigger than what I thought earlier.”

Of course, there will plenty of other players, too.

Ebare and Newberry agree that any big bags caught will likely be at the hand of a Carolina rig, big crankbait, flutter spoon or jig somewhere offshore near brush, rocks, stumps and drains. Though, if pressured fish are a concern, don’t overlook the fact that a drop-shot and shaky head might account for some quality bags.

On the shallow side of things, a vibrating jig and spinnerbait along with a Texas rig and jig can be a hard-to-beat combo when tossed around shallow grass, bushes and standing trees.

There’s no shortage of good picks for this tournament. If you like to go heavy on the local side, or guys with good experience on the lake, then Newberry, Ebare, Jim Tutt, Clark Reehm, Nick LeBrun, Justin Cooper, Tommy Dickerson and Jeff Reynolds are solid options. Additionally, rookies Cameron Mattison and River Lee could be interesting takes since they have decent track records on the pond.

Some obvious picks would be John Cox and Mark Rose. Outside of them, you should consider Dylan Hays, Kerry Milner, Spencer Shuffield, Ron Nelson or Jason Reyes. And honestly, Rayburn seems to be a place where new faces shine each time we go there, so with the talent in the field there are likely more sleeper picks in the mix.