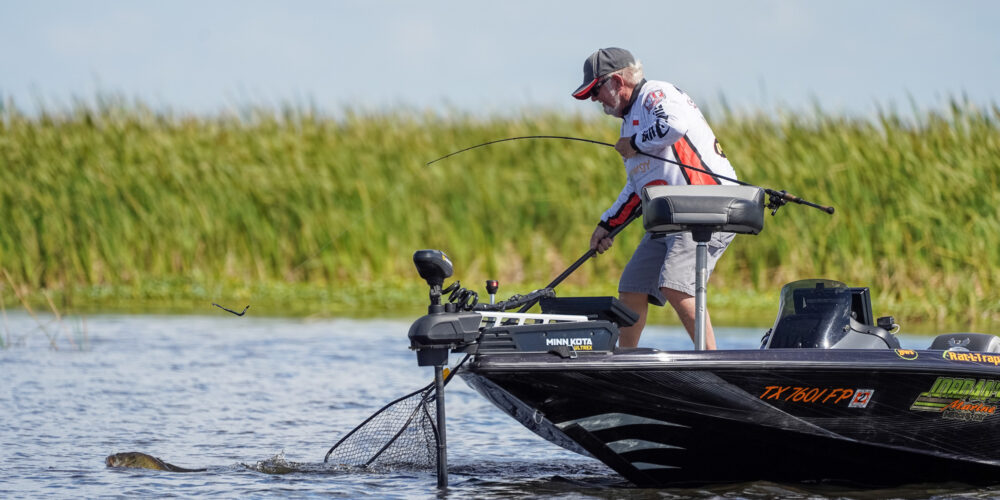 Like the first day at the 13 Fishing Stop 1 of the Tackle Warehouse Pro Circuit Presented by Bad Boy Mowers, there were two main ways to catch a bass today on Lake Okeechobee.

Anglers were sticking with flipping and pitching soft plastics or winding baits through the expansive sections of aquatic vegetation on the famed lake. All of the top five anglers employed one of the two styles, with some mixing it up and doing both.

Bass Pro Tour angler Skeet Reese started the day in 16th with 17 pounds, 12 ounces and added 21-9 to vault into second. The biggest bass of the day and tournament so far, an 8-8 lunker helped the cause tremendously.

He landed it with the help of a 6-inch Berkley PowerBait The General fished on 25-pound-test Berkley Trilene 100% Fluorocarbon.

The big one bit shortly before 11 o’clock, a pivotal time this week, according to Reese.

“Yesterday, they started biting at the same time,” says Reese. “I didn’t catch as many today, maybe 10, but they were bigger. I’m just waiting for it to get right because you never know when a new wave will be coming.”

To help cover some water, Reese also utilized a vibrating jig paired with a Berkley PowerBait The Deal serving as the trailer.

“That was my combo, switching between that and pitching The General,” he says.

Jim Neece Jr. was the leader going into the day and did enough to keep himself in contention. His second day total was 11-9, though it only dropped him just two spots.

“I don’t know what happened other than they didn’t bite,” he says. “I lost two big ones today and that hurt my bag a few pounds.”

Neece stuck to the same area up north that produced the 27-pound bag on day one, but after struggling this morning, he changed tactics to salvage the day.

“I changed up baits, but the hookup percentage of what I switched to was a little off,” says Neece. “I know they are in my area and they gotta eat sometime, so I’m going back there again tomorrow.”

Dicky Newberry began the day in sixth place and jumped two spots thanks to a 17-4 ounce bag. Included in that was a 7-plus-pound kicker.

“Each day, I’ve been getting a small limit of around 10 pounds and then culling up from there,” says Newberry. “Most of my bigger bites have been coming later in the day and my biggest today was around 1 o’clock.”

Like a lot of the top pros, Newberry says fishing slow is the key to his success so far.

“I have a four- or five-hundred-yard stretch and I’m just going back and forth through it,” he says. “I am in an area that they want to move up to and I’m just waiting for them to get the urge. I fished one little area about 10 times before that big one bit, so I know more are coming.”

Unlike many others in the event, he has the area mostly to himself on the lake’s south end.

“There is one other boat in there and a couple of others will come in once in a while,” says Newberry.

Indiana’s Bill McDonald is fishing the same area as the leader Miles Burghoff and sixth-place angler Anthony Gagliardi, among a host of other anglers.

“It’s a public area and there are several guys who are up in the standings,” says McDonald. “It is getting a bunch of pressure, but I think more fish are still coming. I am fishing slowly and it is tedious; that’s just what it is.”

McDonald shared that he is mixing it up between a Strike King Thunder Cricket and flipping and pitching a Strike King Ocho – two Okeechobee staples.

“The Thunder Cricket was what I got my biggest one on today,” he says. “I’m moving quickly when I can and then slowing down and pitching and flipping that Ocho.”