For the love of hair 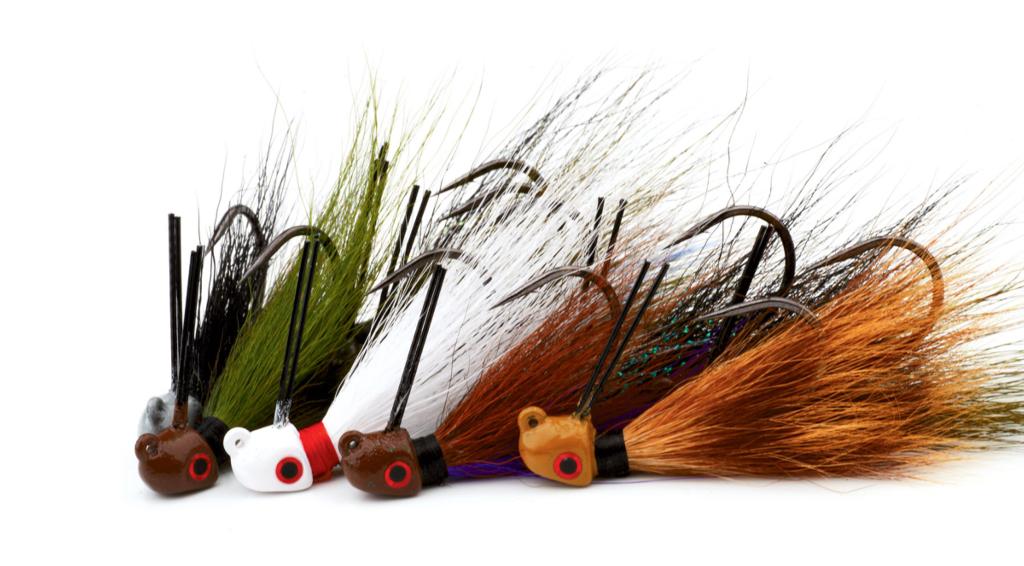 Guido Hibdon and I have something in common.

No, I’m not attempting to compare my stumbling angling antics with the expert skills of the bass-fishing icon from Gravois Mills, Mo. After all, here’s a guy who’s guided for bass on Lake of the Ozarks since a teenager, created lures used by anglers around the country, fished professionally on the Wal-Mart FLW Tour and Bassmaster Tour, and has caught more bass than the average fisherman can comprehend.

However, what we do share is respect for the simple hair jig. During a fishing outing with Hibdon on Beaver Lake, I had an opportunity to discuss hair jigs and watch the master at work.

In the 1950s, hand-tied hair jigs were a standard in the tackle boxes of freshwater anglers. However, when soft-plastic, action-tail bodies began coming on strong in the 1970s, hair jigs slowly began to fade from sight.

But, just because the masses gave up hair in favor of plastic did not mean hair quit catching bass. A handful of knowledgeable anglers like Hibdon knew there was something special about hair that could not be duplicated by artificial material.

“It’s the undulation factor that gives a natural flow so representative of aquatic creatures,” Hibdon stated. “There is also the `puff’ factor; when you stop moving a quality hair jig, it puffs or flares. Besides, it’s a small package overall – just right for bass to engulf whether they have an appetite or a full belly.

“A quality hair jig catches fish better than almost any plastic-body jig out there, including rubber- and silicone-skirted jigs. When fishing gets tough on a clearwater lake, a hair jig is going to outfish any lure in your box.

“I enjoy taking someone out to show how effective a hair jig can be under the right conditions,” Hibdon continued. “I’ll pull up to a point and we’ll begin fishing with a skirted jig and Guido Bug trailer – maybe catching five or six bass until the fish stop biting. Then we throw hair jigs on the same spot, catching maybe another 10, 15 or 20 bass. When someone sees that, they understand how good hair can be.”

Hibdon explained that his father taught him to wrap jigs when he was 12 or 13 years old. By the time Hibdon started guiding at age 16, he already had a list of anglers requesting his hair jigs. But as his guide business grew and his tournament career blossomed, there was no time to tie commercially.

According to Hibdon, high-quality hair jigs have practically disappeared from the market for one reason: cost. There is also an investment of time in selecting the best material and tying each jig properly. Mass-produced fake-hair jigs do not perform anywhere close to a hand-tied hair jig from an expert craftsman. 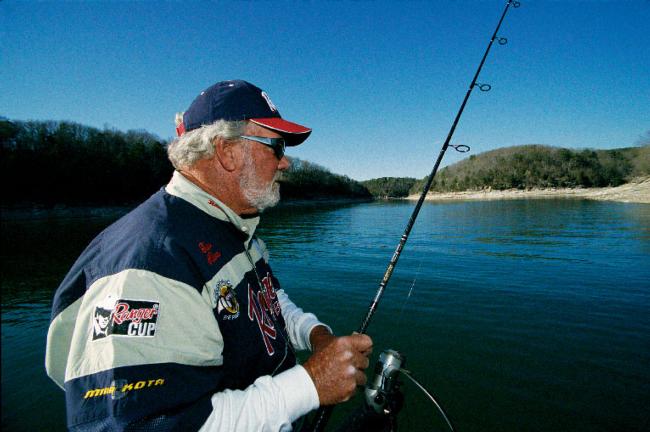 “If we had to pay someone to wrap a good one to our specifications, it would probably sell for around $4 per jig,” Hibdon said. “No one is willing to pay that for a hair jig when they can fish a plastic-body jig for pennies. Nowadays, we tie just enough for our personal use.”

Bucktail is typically the choice of jig tiers, but that’s not what Hibdon uses.

“Deer-flank hair is softer than bucktail, thereby creating better flow in the water,” he said. “I’ve also tried squirrel, badger and even silver fox. Coyote works nicely if you comb out the downy part in the coat.

“Black bear is awful good, and polar bear was the best ever. But deer-flank hair is what I use almost exclusively because it flows and flares nicely, and it takes dye.

“Another secret is to wrap hair sparsely,” Hibdon said. “Practically every commercially tied jig I see has too much hair. A good hair jig is a case where less is better.”

Hibdon ties hair jigs in black, white, brown and olive – sometimes using a little burnt orange or gray for a contrasting belly or back color.

“It’s impossible today to get good gray. Nobody can dye it like they did years ago. I have a piece of gray-dyed flank hair that I would not sell for $1,000.”

Hibdon explained he uses three different heads for his jigs – round, football and darter – each with a specific presentation in mind.

“Do eyes on jigs matter?” Hibdon asked rhetorically. “They have got to make a difference. I won’t throw a hair jig that does not have eyes. I take pride in putting eyes on each jig – it gives them a finished appearance. We use an epoxy sealant to coat the head. All those little things make our jigs more effective than ordinary ones.”

According to Hibdon, many bass anglers have the misconception that a hair jig is strictly for finesse fishing. “Yes, we wrap 1/32- and 1/16-ounce hair for finesse needs when fishing gets really tough. But mostly we use 1/8- or 1/4-ounce hair jigs in place of other lures or jigs for situations that do not require a finesse approach. Slow fall, drag it or swim it – we do all that with hair throughout the year for largemouth, spotted and smallmouth bass.

“I suppose most anglers use hair from late fall through early spring. We sure catch the heck out of bass in cold water on hair, but we also catch ’em good on hair during the spawn and even during summer under the right conditions. As long as you fish hair slowly, you can’t go wrong – I guess that is why anglers automatically think hair for cold water.”

Then he quickly added, “Actually, we fish them slow for largemouths and spotted bass all the time – a slow fall, a slow swim and a slow drag. But for smallmouths, you can use a speedier retrieve.”

Speaking of smallmouths, Hibdon prefers a hair jig over anything else for bed-fishing brown bass. A small black or brown version tied on a darter head works best.

Hibdon went on to tell about a favorite pattern on Lake of the Ozarks in late summer when largemouth bass relate to floating docks. Many anglers would throw a spinnerbait tight to draw the bass out, but Hibdon said a hair jig is a better tool. 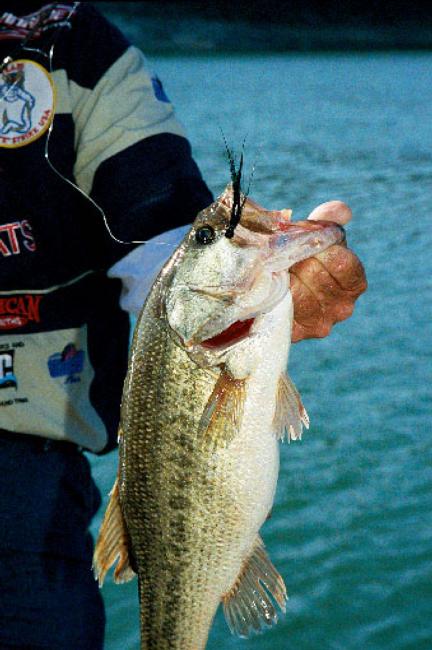 “Put a little white twister tail on a 1/4-ounce white-hair jig, pitch it tight to shore, and swim it back to the boat tight to the edge of the floating dock,” Hibdon detailed. “Bass eat it better than a spinnerbait and you don’t miss them as often.”

Hibdon continued telling about some of his hair jig experiences around the country, from the Midwest to Florida.

“There was one time in particular that really stands out because it didn’t seem like the place to use a hair jig. I was fishing a Bassmaster event on the Potomac River during Hurricane Hugo. I caught the heck out of largemouths by pitching a white hair jig into openings in the pad beds. I went on to win the tournament.”

During the winter, Hibdon said bass at Table Rock Lake and Bull Shoals Lake will pack into creek arms along bluff banks – usually at a depth of 35 to 40 feet. It’s a common situation on highland reservoirs around the country.

“Take one of those hair jigs, cast it parallel to a steep bank, and let it trickle down to the depth the fish are holding, using a lift-and-drop retrieve as it bumps the bluff,” Hibdon advised. “As long as it’s falling slow enough, no bass can refuse it. This is the time of year you don’t want to speed up the retrieve – even for smallmouths.”

He wraps a standard round head for vertical-drop presentations, where the strike is anticipated as the jigs falls slowly to the bottom. A 1/16- or 1/8-ounce ball head is Hibdon’s favorite for dock fishing or fishing around standing timber and brush – anytime casts are targeted at visible cover. A 1/4-ounce head may be used for deep bluffs. To increase the hang time during descent, a plastic trailer will be added – such as a small crappie-sized grub or Baby Guido Bug.

He may cast the round head right to the cover and immediately let it fall to the bottom, then hop it once or twice before reeling it in. Or he may cast beyond the cover, swim it a short distance and let it drop beside the cover. He ties round heads in both dark hair and all white hair.

Hibdon wraps a football head specifically for bottom crawling. This is the head of choice for pea-gravel banks, rocky points, shoals, hard-bottom humps or any situation that calls for a continual bottom-contact retrieve. By using darker-colored hair, perhaps with a dash of orange, the football-head presentation is intended to represent a crayfish.

On 1/8- and 1/4-ounce round and football heads, Hibdon often molds a single-strand, wire-cable brush guard into the head. While not making it completely snag proof, the guard helps deflect brush, vegetation, upright posts and dock cables from the hook. Smaller 1/32- and 1/16-ounce jigs rarely receive a wire guard.

“And then there’s the darter-head hair jig,” Hibdon said. “The darter head is intended to create a better overall minnow shape. I never add a trailer to a darter head. This is the one I use with faster swimming retrieves for smallmouths. Even on pendulum-swing drops, the darter head falls faster and looks more like a minnow. Although I stress a hair jig should be fished extremely slow for largemouths, you can’t move a bait fast enough to keep it away from a smallmouth.”

Regardless of the presentation, Hibdon fishes hair jigs on the same rod – a 6-foot, 10-inch, medium-action spinning rod with a very fast tip.

His jig reel is spooled with 8-pound-test fluorocarbon the majority of time, going to 10-pound test in certain situations. 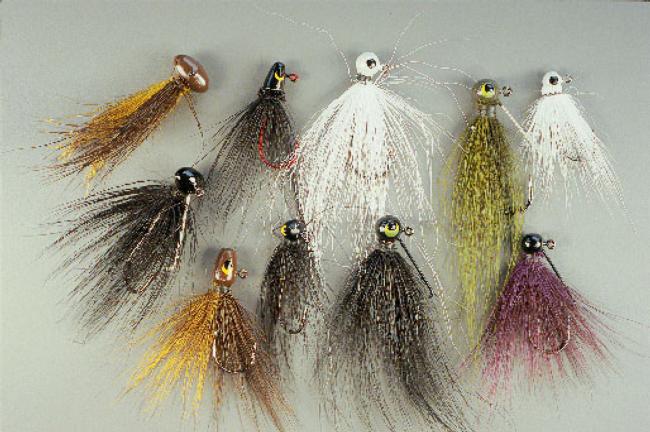 Hibdon said wrapping hair jigs and fishing them is a disappearing art. Having made the case for hair jigs, he hopes more anglers will consider adding a little hair to their tackle box.

“I suspect there are a lot of older anglers out there who wouldn’t mind seeing a hair revival,” he joked, as he ran his hand through the graying locks on his own head.

Don’t want to tie your own jigs?

Check out these sources for hand-tied jigs:

Cumberland Pro Lures: cumberlandpro.com; (606) 561-5478 – a hot jig on reservoirs like Dale Hollow and Cumberland Lake in Tennessee and Kentucky, owner Brian Wilson offers to tie custom colors for anglers that request them as well as carry a large variety of stock colors. They use precise amounts of real hair to get the jig to flare and puff in the water.

Jimmy D’s River Bugs: stevedezurik.com; (320) 252-2605 – This is a true custom-jig tier that offers both a standard line of hair/feather jigs plus the option for individual custom work. An angler provides a sample of the desired jig and Jim Dezurik will tie it; minimum order of one dozen required.