Getting a grip in small rigs 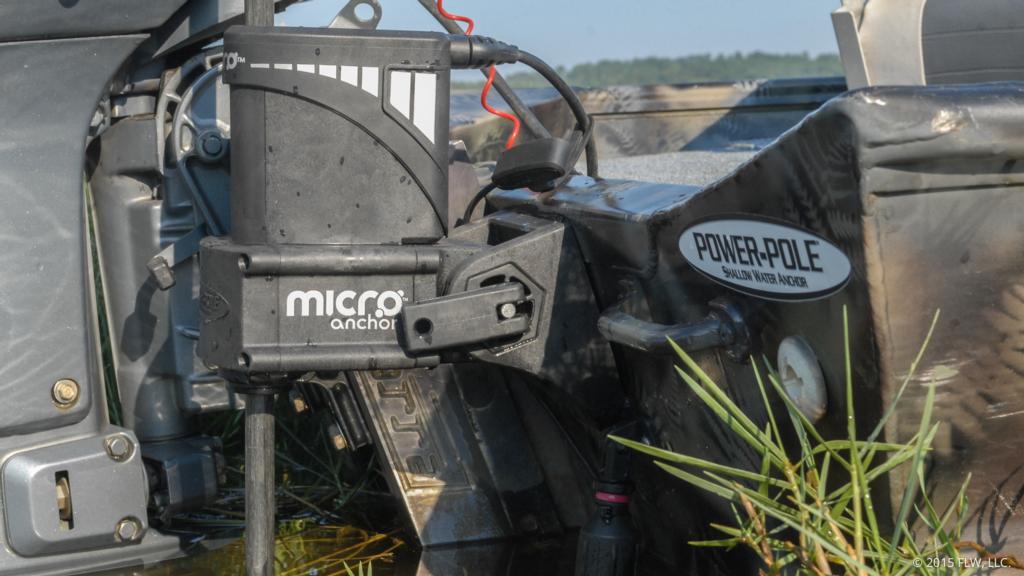 While racy fiberglass boats decked out with big outboards and high-tech electronics continue to ring the bell with bass anglers, smaller aluminum rigs, kayaks and even small electric-powered boats have developed a pretty strong following as well.

I've got a 21-foot Ranger and a 15-foot Alweld flat-bottom johnboat sitting in my shop, and the johnboat almost always gets the call when a small, stump-filled lake or a lazy river system is on the menu. It's great for getting into skinny water or just knocking around in tight places where the big Ranger might get into a pinch. Plus, the little boat is fun to drive and a real pleasure to fish from – especially with the series of upgrades I made to it over the summer.

Perhaps the most noteworthy is the addition of a Micro Anchor from Power-Pole. It's an all-electric shallow-water anchor and serves the same purpose as JL Marine Systems' flagship hydraulic Power-Pole introduced in 2000. The difference is this one is made especially for boats weighing 1,500 pounds or less, including passengers and gear.

I'm not the only one with good things to say about the Micro Anchor, either. The unit won Best of Show at the 2013 ICAST show in Las Vegas.

Just as its name implies, the Micro Anchor is a compact unit. It has a small footprint and won't weigh a boat down, either. It comes in two pieces (excluding the Micro Spike): a durable mounting bracket and driver motor; together, they weigh about 7 1/2 pounds.

The 60-watt, high-torque electric driver motor operates using Power-Pole's C-Monster wireless control technology to deliver fast and quiet stopping power in water as deep as 8 feet using a removable 8 1/2-foot-long spike. Once deployed, the heavy-duty spike shoots straight down and drives into the bottom, stopping the boat in its path in a matter of seconds. 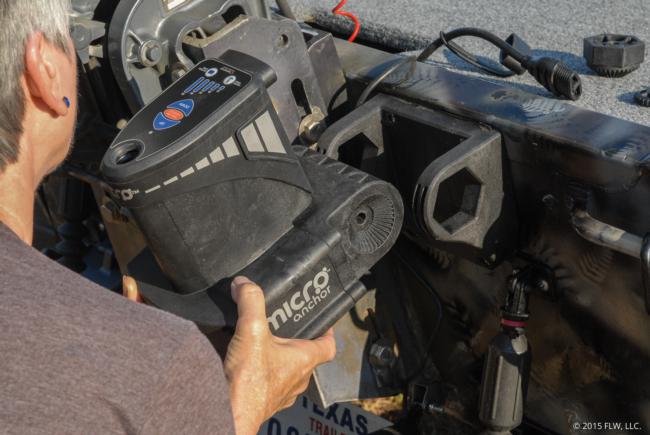 There are three ways the anchor unit can be mounted to a boat. The first two require drilling or using existing holes in the transom. Some additional mounting hardware and accessories are available for kayak anglers.

1. Adjustable Mounting Bracket: A rigid mounting bracket comes in the box with each Micro Anchor. It’s designed for mounting to a flat surface on the transom or deck and allows for easy adjustments to the angle of the driver motor. Additional adjustable mounting brackets can be purchased and used to swap the driver motor from one boat to the next quickly and easily.

2. Adapter Plate: The Micro can be installed via an optional aluminum adapter plate that mounts between the motor/jack plate and transom or to the side of the jack plate, similar to the mounting setup on traditional Power-Poles used on full-sized boats. Power-Pole can provide information to determine which plate design works best for various setups.

3. Transom Clamp: The optional transom clamp operates using a pair of swivel clamps similar to those found on a portable transom-mounted trolling motor. It allows for easy and quick removal of the anchor for storage or transfer to a different vessel.

How I Did It

I opted to use the adjustable mounting bracket and mounted it to the outside of the transom employing the supplied stainless bolts, nuts and washers. This mounting method required drilling four holes and carefully placing the bracket to ensure the unit was installed level, above the waterline and with sufficient clearance for securing the driver motor to the bracket.

Locating the boat’s waterline is simply a matter of putting the boat in the water and then marking the waterline before installing the mounting bracket. A dab of quality marine-grade water sealant can be injected into each bolt hole to prevent leaks once everything is buttoned up. Power-Pole provides detailed instructions that are plenty sufficient for coaching anyone with basic hand tools and decent handyman skills through the installation process.

Once the mounting bracket is installed on the boat, the driver motor unit secures quickly and easily using a quick-release clamp bolt, hex locks and an adjustment nut. Loosening the adjustment nut allows the driver motor to be adjusted up or down to achieve the proper angle so the spike drives straight down.

Unlike the hydraulic Power-Poles found on big boats, the Micro Anchor operates strictly off of battery power. The low-RPM motor deploys, retracts and secures the 3/4-inch spike so quietly that I can't even hear it run. Once retracted, the spike can be left in the park position while running to the next spot, or easily removed and stowed in the two included rubber clamps designed to mount to the boat deck. 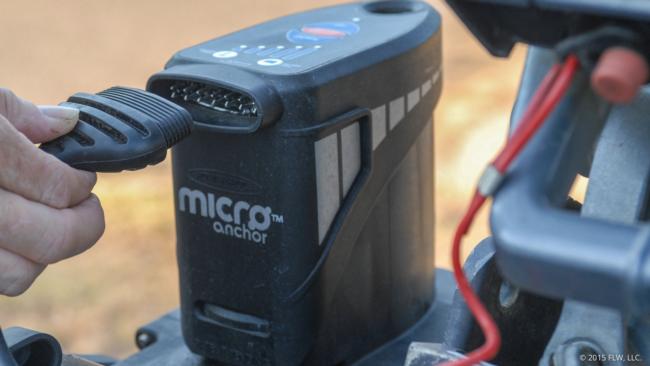 The unit can be wired to a 12-volt battery or used with an optional rechargeable lithium battery pack that Power-Pole says will deliver as many as 100 deployment/retraction cycles when fully charged. The driver unit connects using a male plug connector at the end of the supplied power cord. I connected mine to the same battery that provides juice to my depth finder and Minn Kota trolling motor. 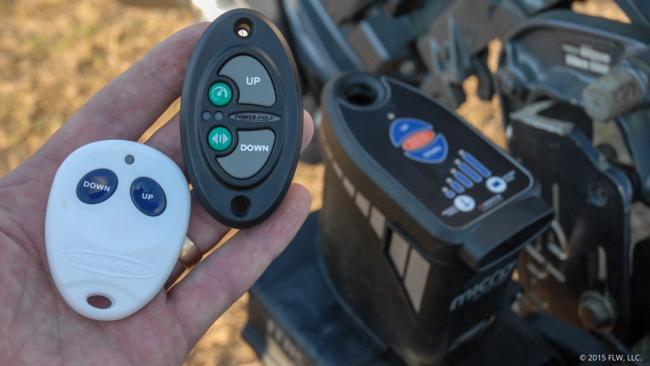 While the Micro Anchor might be small in size, it is huge on cool features.

Power Pole's C-Monster technology allows for complete remote operation and the use of various C-Monster apps so you can customize anchor settings and monitor the performance from a compatible smartphone. Each anchor comes with a key fob on a neck lanyard plus a wireless dash switch. Either can be used to put the unit into the "Wave Mode." This tells the anchor to re-drive the spike and absorb waves to hold tighter in choppy water. The dash switch also can be used to program two anchors for simultaneous use and for adjusting deployment and retraction speeds.

The main drive unit features a topside control panel that allows for operation without the remotes and for adjusting the amount of driving force delivered to the spike based on the conditions and size of the boat. The panel also indicates battery power levels. 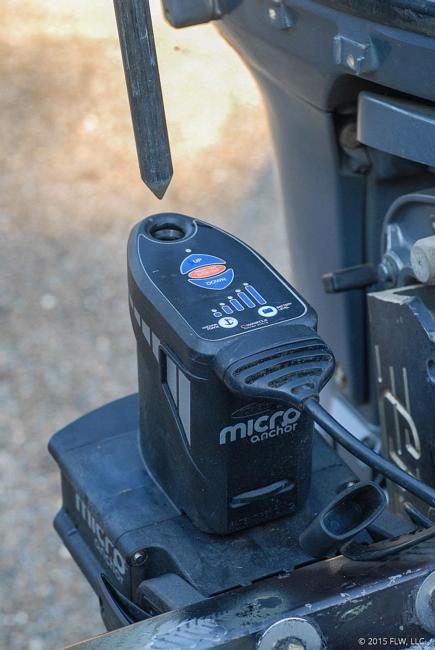 Power-Pole designed its 3/4-inch Micro Spike, which is sold separately, specifically for use with the Micro Anchor. A threaded fitting on top can be adapted for mounting action cameras, lights and other accessories. Power-Pole notes that other stakeout spikes will work with the Micro Anchor provided they are 3/4 inch in diameter and made from a durable, flexible material. These spikes might require some minor modifications in order work properly, as outlined on the supplied "Non Power-Pole Spike" instruction sheet.

The Micro Anchor sells for $595, plus $95 for the optional Micro Spike. Check it out at power-pole.com.