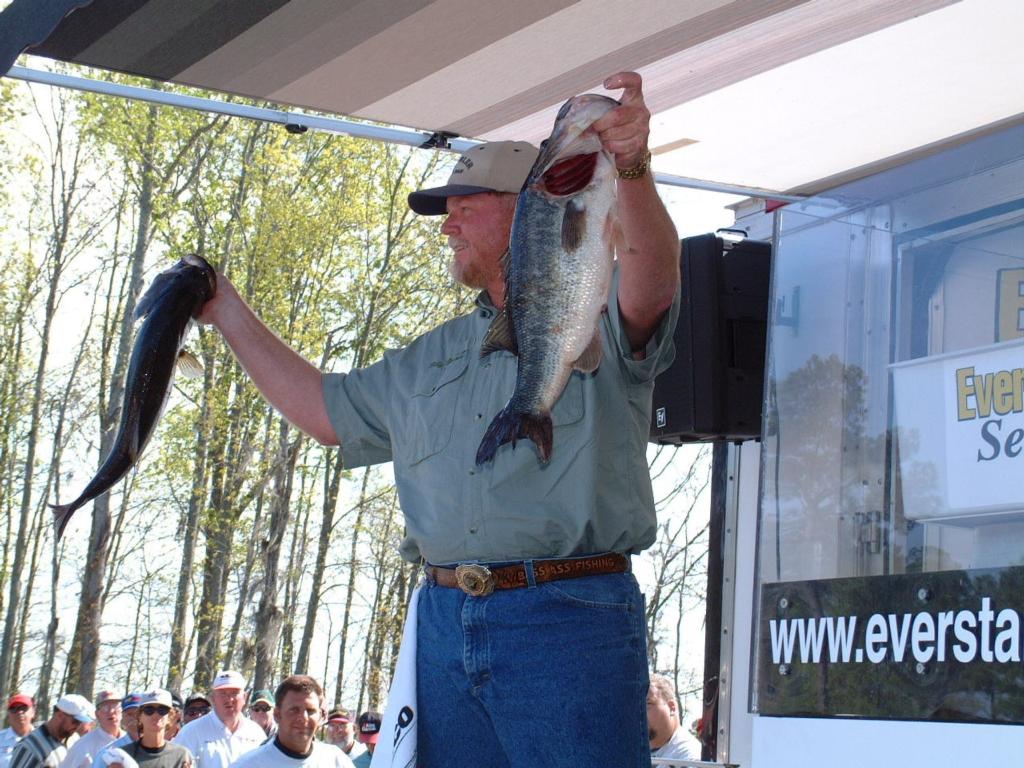 Now, tomorrow, it’s down to the final 10 – 10 pro anglers all starting from the same zero weight in a one-day battle royal to bag the most bass. The winner takes home $15,000 and a brand new Ranger bass boat. The rest, well, they’ll collect some good money and some points, but it’s just not quite the same as a victory, is it?

Round one of the one-day shootouts – which was today’s EverStart Series semifinal – went to Billy Bowen Jr. of Ocala, Fla. He brought in five fish weighing 22 pounds, 1 ounce to top the 30-person pro field, edging out runner-up Vince Ingle (19 pounds, 12 ounces) of Maryville, Tenn., by just over a pound.

For Bowen, who’s had a smattering of first-place finishes on the Red Man Tournament Trail (now Wal-Mart Bass Fishing League) and a couple of top-30s in this, his rookie season on the EverStart Series, it felt good to reach the top at the next level – if, perhaps, only for today.

“It feels really good,” he said. “I have two 18th-place finishes this year (at EverStarts Lake Okeechobee, Fla., and Lake Eufaula, Ala.), so it feels super.”

And it was a bit of a surprise. Yesterday, much of tournament field took advantage of an active bass bite brought on by rainy, cloudy weather and weighed in a parade of sacks filled with huge fish. Fourteen pros and one co-angler each weighed in over 20 pounds. The buzz this morning at takeoff was that today would be much of the same.

“I thought I’d make the top 10,” Bowen said about his weight of 22-1 today, “but I didn’t think I’d end up in first place. It sure wasn’t the same fishing today as it was yesterday.”

The difference today was the sun. It finally graced South Carolina with its presence this morning. While that was good for sunbathers and jet-skiers on Lake Santee Cooper, it put a damper on the bass fishing. EverStart competitors found they had to change tactics to pursue a more elusive fish bite.

“The fish were just crushing the spinnerbait yesterday. I really thought they would do the same thing today, but the clouds broke about 10 o’clock,” said pro Glen Chappelear of Acworth, Ga., who weighed in the heaviest stringer of the tournament yesterday at 29 pounds, 3 ounces. Today he only conjured up 10 pounds, 4 ounces and missed the final-round cut, placing 18th.

So it was a race to see who could adapt to the changing bite the fastest, and Bowen won. When the sun came out, he switched from throwing the trusty spinnerbaits that had treated him well the first two days to pitching a 1/2-ounce Ninja jig into trees and bushes. That, combined with the relatively fewer number of tournament boats fishing his area on Lake Marion, was his ticket to the top of today’s leaderboard.

Tomorrow, pending the weather, Bowen hopes to do the same thing.

“Where I’m fishing is just full of big fish,” he said. “The fish will hold up – if the weather lets me get there. It’s a pretty big area to fish.”

Following Bowen and Ingle in the Pro Division top five was Ricky Shumpert of Lexington, Ky., a local who is one of the favorites in this tournament. He also figured out the changing conditions today and weighed in five fish for 17 pounds, 14 ounces to place third.

“I really thought the cold weather (earlier in the week) was going to make it a lot tougher than it was,” Shumpert said. “Tomorrow, if it rains, I’ll do something different. If not, I’ll run at the bank and throw a worm.”

While it’s probably not unheard of, no one seemed to know if a co-angler had ever placed first in back-to-back days at an EverStart Series tournament before. The probability of such an occurrence is low; co-anglers must adapt from one day to the next to different locations and the fishing preferences of the various pros who control the boat.

But that is exactly what happened today. David Geeter of Augusta, Ga., brought in the day’s biggest sack in the Co-Angler Division – 16 pounds, 15 ounces – and landed the top qualifying spot for the second day in a row. Yesterday, he also placed first and was the only co-angler to weigh in over 20 pounds of bass.

Naturally, the question remains: What’s his secret – especially considering that he did it on two consecutive days with quite contrasting conditions?

“I’m fishing with handmade spinnerbaits,” Geeter said by way of explanation. “I’ve been building bait for the conditions. I’m fishing the way my daddy taught me in the `60s.”

Can he pull off a three-round sweep by winning the tournament tomorrow and capturing the $6,000 co-angler prize?

Geeter answered confidently, “I intend to fish hard and provoke vicious strikes and the rest are just going to have to catch me.”

Again, tomorrow, the top 10 pros and co-anglers will start at zero for the final round. The winning pro will receive $15,000 cash and a new Ranger boat, and the winning co-angler will collect $6,000 cash.