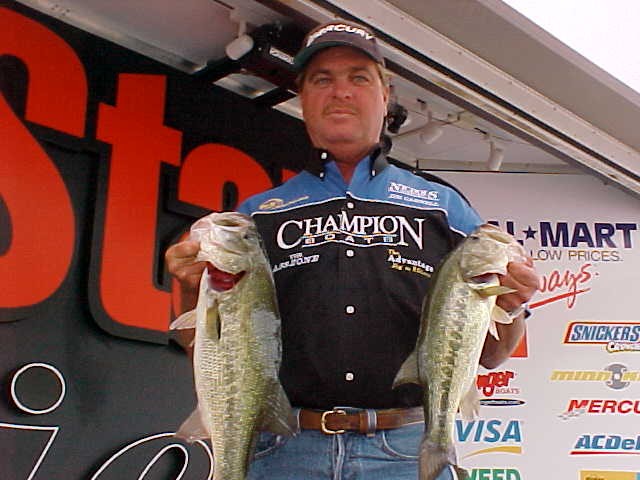 JASPER, Texas – Jim Carnell showed why his number four ranking on the 2001 FLW Tour is no fluke. Using a whopping two-day catch of 33 pounds, 10 ounces, Carnell bested the field to gain the top spot in the $185,000 EverStart Series Central Division tour event on Sam Rayburn. Carnell, clearly the most consistent angler at the tournament to date, said he was happy with his performance. However, Carnell stressed that he still had a long way to go before he was in position to grab the top prize on Saturday.

“There’s still two very difficult days ahead of me, so I’m trying not to get too excited,” said Carnell, a native of Muskogee, Okla. “But so far I’m pretty pleased with my performance. If I can keep this up for two more days, I should be in great shape.”

Fishing in only the fifth EverStart tournament of his career, Carnell continued his string of dominating performances – qualifying for the top 30 in all but one of the Central Division tournaments he’s participated in since 2000.

“My decision to quit my day job two years ago is looking pretty good right now,” he said.

Although Carnell continued to wreak havoc on the rest of the field, he said that his confidence level wasn’t very high coming into the tournament.

“I didn’t have that good of a practice all week,” said Carnell, who has repeatedly employed his successful technique of flipping soft plastics throughout the tournament. “So I didn’t think that I was going to do this well at all. It just goes to show you that fishing is a strange sport.”

Carnell said he has found a location with enough fish to keep him competitive throughout the tournament if the conditions hold up. However, he said he is not averse to further exploration of the reservoir if tomorrow’s round goes well in the early hours.

“I’m going to try and go back to the same areas I’ve been fishing all week,” said Carnell, who believes that a 13-pound stringer is probably good enough to qualify for Saturday’s top 10. “If I’m able to catch a limit early, I think I might go looking for some new areas. But it’s all going to depend on the wind and the weather.”

Bob Sealy of Sam Rayburn, Texas, used a two-day catch of 29 pounds, 14 ounces to capture second place in the Pro Division. However, despite knowing the waters of Sam Rayburn as intimately as any angler in the tournament, Sealy said that he, too, was surprised by his performance.

“The thing about it is that I didn’t get any chance to practice this week,” said Sealy, who is fishing in his first EverStart tournament. “Usually, I do very well in practice and not nearly as well in tournaments because I get too nervous. But this time, I kind of just dove right in. And it seems to be working out so far.”

While many anglers have chosen to fish the shallow waters, Sealy said that he will continue to employ his strategy of fishing the deeper parts of the reservoir.

“My whole philosophy is to continue to fish the points on the main lake,” he said. “I’m definitely going deeper than most people here.”

Sealy said he has already targeted some prime locations that should have enough fish to put him into the top 10 if everything goes well on Friday.

“The area I’m in is holding a lot of big fish and I think I have a good shot at making it to Saturday,” said Sealy, who also believes 13 pounds of fish should be good enough to make it to the semifinal round. “The key is to be patient. The bite begins early in the morning and then seems to drop off until about 1 p.m. The mistake many people make is that they don’t stay with what works for them when the fish aren’t biting. You have to stay focused.”

Anthony Cain of Alexandria, La., took over the leaderboard in the Co-Angler Division with a total catch of 22 pounds, 9 ounces. Cain, who jumped up four spots to grab the overall lead, said he was extraordinarily happy with his performance.

“It feel really good to be where I’m at right now,” said Cain. “I knew this tournament was going to be pretty tough, so I guess I’ve been sort of lucky so far. I’ve had some really good partners and the fishing has been pretty good. And that’s all you can ask for.”

Cain said that the high water level has proved to be a difficult obstacle for many anglers, including himself.

“It’s really tough fishing when the water level is this high,” he said. “The problem is that when you catch a fish, it tends to get hung up on the cover. And you can lose a lot of fish that way.”

But given the circumstances, Cain said he wouldn’t change a thing.

“With the conditions as tough as they are, I’m definitely happy to be where I am.”

FLW tournament director Gale Stearns of Calvert City, Ky., continued his improbable run to the semifinal round. Although Stearns only decided to fill in as a last-minute replacement for an angler who had dropped out due to a personal emergency, the long-time Operation Bass official managed to string together two fantastic performances to reach the top 30. Stearns finished the day in second place after recording a two-day catch of 22 pounds, 3 ounces.

Barton joined Lucy Mize, who finished in 22nd place in the Pro Division, as the only two women to make the top-30 cut.

Christopher Lemon of Mooresville, Ind., captured the Big Bass award of the day in the Co-angler Division after landing a 7-pound, 3-ounce bass. Lemon won $250 for his efforts.