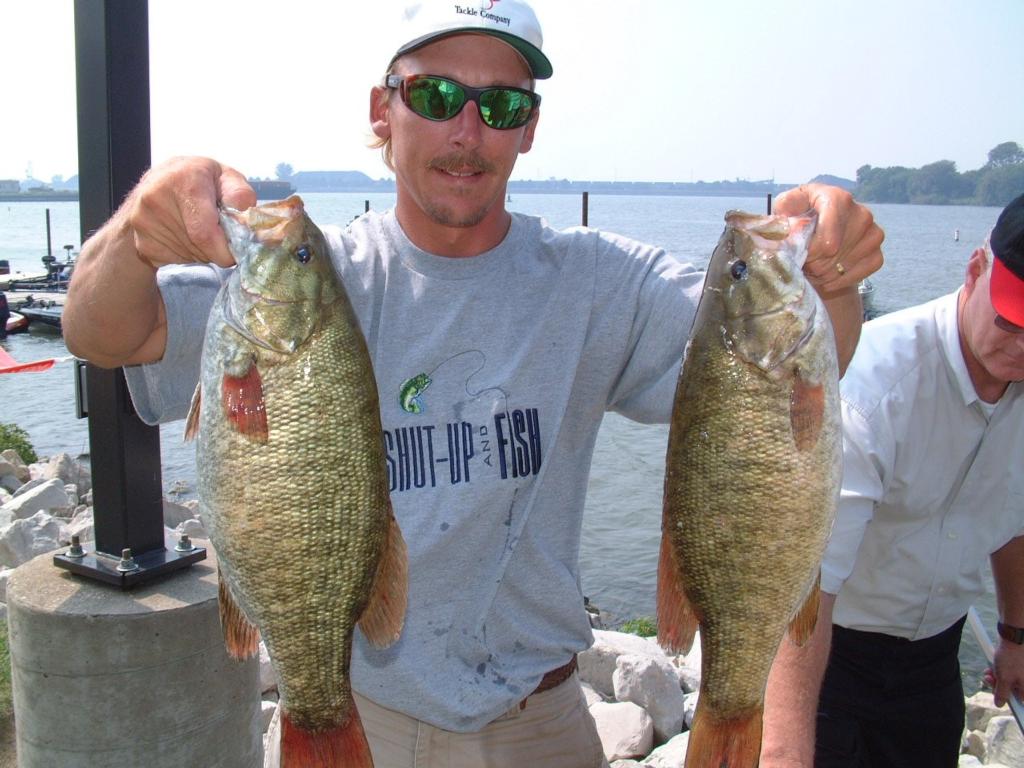 SANDUSKY, Ohio – Grove City, Ohio’s Clark Wolfe overcame major motor problems and heavy waves Friday to take over the Pro Division lead in the semifinal round of competition at the $185,000 EverStart Series Northern Division tournament on Sandusky Bay. He weighed in five bass for a combined 20 pounds, 1 ounce and led runner-up Vic Vatalaro of Kent, Ohio, by 5 ounces.

“It feels great,” Wolfe said. “I’ve been working really hard for this kind of accomplishment.”

However, Wolfe’s day got off on the wrong foot. Six miles into his run onto Lake Erie this morning, his motor began to misbehave. Not only did his trim keep trying to come up when he didn’t want it to, the engine began to bog down as well. He and co-angler partner Bill Selawsky of Edison, N.J., were forced to play a tag-team wrestling match just to keep the boat moving.

Somehow, Wolfe was able to reach his fishing location – and it paid off. While he only caught six keeper bass all day, they were all in the 3- to 5-pound range. He needed every ounce to stay in contention because the smallmouth bite picked up again today and almost everyone was having pretty good success. Of 30 competitors in the Pro Division, 19 of them caught five-fish limits. The pro cut weight for tomorrow’s finals ended up at a hefty 17 pounds.

“My partners have been getting bigger fish than me all week,” Wolfe said. “But I found a spot where I haven’t seen another boat in three days.”

While he wouldn’t reveal his fishing location, the pro leader said he was fishing a green and purple-gold tube on isolated structure.

“I was trying to fish vertically,” he said. “But I was in 5-foot (waves) today so it wasn’t too vertical.”

As far as tomorrow’s all-important final round is concerned, Wolfe is banking on the continued productivity of his secret location as well as a good mechanic.

“I’ve fished this spot for a year now and I’ve never seen anyone on it,” he said. “The fish are there, I feel like I’ve got a shot. I just hope I’ve got a boat to fish out of tomorrow.”

Another thing concerning Wolfe and other finalists is the presence of Lima, Ohio’s Steve Clapper in the finals. Clapper, who finished sixth today, has been on the minds of many competitors this week because he is considered to be one of the best bass anglers on Lake Erie. He has won two Wal-Mart BFL events here recently and has quietly made each cut this week.

“Yeah, he’s sandbagging,” Wolfe joked. “He’s the best of the best here. If you can beat Clapper on any given day, you’ve done well.”

While Clapper denied that he is sandbagging, he did admit that he has held back a little during the early rounds. He said his middling, just-enough weights during the week were due more to a struggle catching fish than a conscious effort to lay off. He’s making a long run to Canadian waters to find fish and, in yesterday’s action, Clapper didn’t catch a keeper bass until 1 o’clock.

“I’m as susceptible to getting skunked as I am to catching 20 pounds,” he said. “There’s a lot of great fishermen here and this is a big body of water. Tomorrow is a different day, but I’m going to let out all the stops.”

While there was no official Big Bass competition for today’s seminal round, pro Ken Jones (21st place, two bass for 9-15) of Shelby, Ohio, weighed in a noteworthy 6-pound, 15-ounce single smallmouth bass.

Doug Caldwell doesn’t even fish the EverStart Series, normally, but Friday he conjured up five bass weighing 20 pounds, 9 ounces to take over the Co-Angler Division lead qualifying spot heading into the final round tomorrow. Caldwell’s catch marked the third day in a row that the co-angler leader has caught more fish than the pro leader here at Sandusky.

“With this fishery, it doesn’t make a difference really if you’re a boater or a non-boater,” Caldwell said. “In fact, it’s sometimes better (to fish from the back of the boat). You don’t have to worry about the trolling motor and the waves.”

Caldwell, who has competed as a co-angler on the FLW Tour since its inception, is fishing in only his second EverStart event ever. Having qualified this year for the FLW Championship, he said he came to Lake Erie to tune up his smallmouth fishing technique for Lake Champlain in September.

“As it ended up, so far I’ve been successful this week,” said Caldwell, who hails from Kane, Pa.

Today he threw a green-pumpkin Gambler tube with a 3/8-ounce weight on 10-pound test line into 3- to 5-foot waves to catch his quarry. By 10:30 this morning, he had his limit.

Another co-angler in the zone is Dwight Ameling of Fremont, Ind. Fresh off a victory at the EverStart Northern event at Thousand Islands, N.Y., last month, Ameling repeated his second-place performance from day two this week with a five-bass, 20-pound, 5-ounce effort today. His catch also outweighed the best in the Pro Division.

Saturday’s final-round action begins at 6:30 a.m. at Bickely’s Boat Dock located at 101 Shelby Street in Sandusky. The final weigh-in begins at 4 p.m. at the Wal-Mart Supercenter located at 5500 Milan Road in Sandusky.