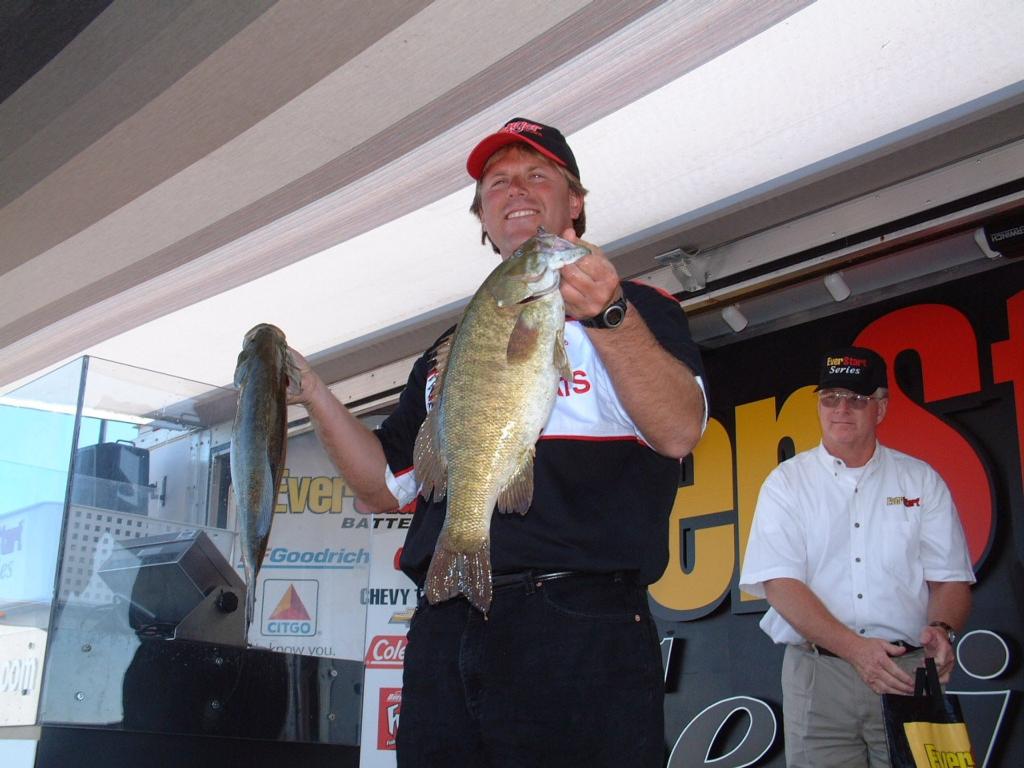 DETROIT – Three years ago Scott Emery found a set of ridges and underwater rock piles about 10 miles east of the mouth of the Detroit River in Lake Erie that held a wealth of smallmouth bass. He did not know back then that the hot spot would one day lead him to his first $15,000 EverStart Series victory, but somehow he knew it was a special fishing hole.

“The fish there are a lot bigger now,” Emery said. “That was the plan: just to go out there and pour it on today.”

Pour it on he did. Emery, who hails from the Detroit suburb of Livonia, landed the second-heaviest five-bass stringer of the tournament – 23 pounds, 2 ounces – and captured the Pro Division title by more than two pounds over runner-up Barry Bucciarelli of Romulus, Mich. In addition to the hefty cash prize, Emery walked away with a brand new Ranger boat for first place.

“This is fantastic,” he said. “I’ve been waiting for this for a long time. I’ve envisioned it many times, but I’ve never been able to execute it.”

Emery, 38, enacted a bit of a Cinderella story this week in Detroit. A longtime competitor on the Wal-Mart BFL circuit, he only began fishing the EverStart Series the last couple of years. He found he could stay in contention at this level, but he had yet to reach the brass ring.

“I tend to be in the top 10 percent, but I’ve never been able to get that lucky break,” he said.

His lucky break came when the fishing hole he found three years ago, an area not more than 10 feet wide and 100 feet long along Lake Erie’s north shore, began to produce some quality smallmouth in practice before this event. While many competitors caught their quarry by dragging a tube lure, he found that his fish were reacting to a slow-rolled spinnerbait technique.

“Two weeks ago, I caught some very high-quality fish doing it,” he said.

Emery, who fished Lake St. Clair the first few days, saved his secret hole on Lake Erie until today’s final round knowing he would need a big kick to contend for the title. Using a big ¾-ounce spinnerbait, Emery targeted larger fish, catching his limit by 8:20 a.m. and culling his five bass to 23 pounds by 12:30. On his first cast of the day he landed a 4 1/2-pound smallmouth. He caught roughly 15 keeper bass today.

“I was very confident I could get 20 pounds,” he said. “This week everything went perfectly. Every decision I made was the correct decision. I only lost three fish all week, and obviously that didn’t hurt me much.”

Emery hopes today’s win could lead to bigger things on the pro tour. While he has competed in one Wal-Mart FLW Tour event, in Detroit in 1999, he found he still has a few things to learn before hitting the big time. He has given himself a three-year timeline to make it and do well at the FLW level, but if he doesn’t he has his day job as a business owner to fall back on.

“It’s a dream for me, but the reality is that work comes first,” he said. “I know my wife will be happy about the win.”

How the rest of the finalists fared

Bucciarelli made a valiant run at the title but he, along with everybody else, was clearly outmatched by Emery’s 23-pound sack. Bucciarelli, who led Friday’s semifinals, caught five fish weighing 20 pounds, 14 ounces and took home $10,000 for second place.

“I thought the bag would weigh more than that,” he said. “Today I was catching them one cast after another.”

Mike Trombly of Perrysburg, Ohio, seemed rooted right around the third-place mark the entire week. He placed third on Wednesday, fourth on Friday, and finished in third place Saturday after weighing in five bass at 19 pounds, 2 ounces. He gathered a check for $9,000.

Following Trombly was 26-year-old Al Gagliarducci of Agawam, Mass., who had an outstanding week considering he only had one day of practice due to scheduling conflicts. He relied on coordinates he recorded during last month’s EverStart competition at Sandusky Bay to find fish for this tournament. He caught five bass weighing 18 pounds, 6 ounces to place fourth and earned $8,000.

“Pretty much the first two days, I burned out everything I had, which wasn’t much,” he said. “I had about three spots on the GPS from Sandusky to go by.”

“Fifteen pounds for a couple of hours of fishing isn’t that bad,” Clapper said.

Koby Kreiger of Osceola, Ind., and his close-to-home fishing hole earned him seventh place and $5,500 for a five-fish weight of 15 pounds, 8 ounces. Kreiger, the opening-round leader who was fishing directly outside of the takeoff and weigh-in point at Elizabeth Park Marina on the Detroit River, said he would have had trouble catching 23 pounds even if he had executed perfectly.

“The biggest problem was that all the anglers who caught 17 and 18 pounds the first day didn’t weigh in any fish the second day,” he joked. “They didn’t restock my fishing hole very well, so I’m kind of mad at them.”

After Kreiger was Jon Jezierski of Troy, Mich., with five bass weighing 14 pounds, 7 ounces. While he caught the largest stringer of the tournament of day two – 23 pounds, 3 ounces – he collected $5,000 for his eighth-place finish.

Next up: EverStart Series Championship

The next EverStart Series event is the tour championship, which will be held Nov. 7-10 on Pickwick Lake in Florence, Ala. Tournament winners and the top 50 pros and top 50 co-anglers from each division will earn a spot in the event. There, the winning pro will receive a Mercury- or Yamaha-powered Ranger boat with GARMIN electronics, Minn Kota trolling motor and EverStart batteries plus $25,000 cash. The winning co-angler will receive a Ranger boat and $10,000 cash.

Top EverStart competitors may also qualify for the Ranger M1 tournament in Mobile, Ala., Feb. 27-March 2, 2002, where they can win up to $1 million in the world’s richest freshwater tournament.