McGahan masters Thousand Islands during opening round of EverStart tourney 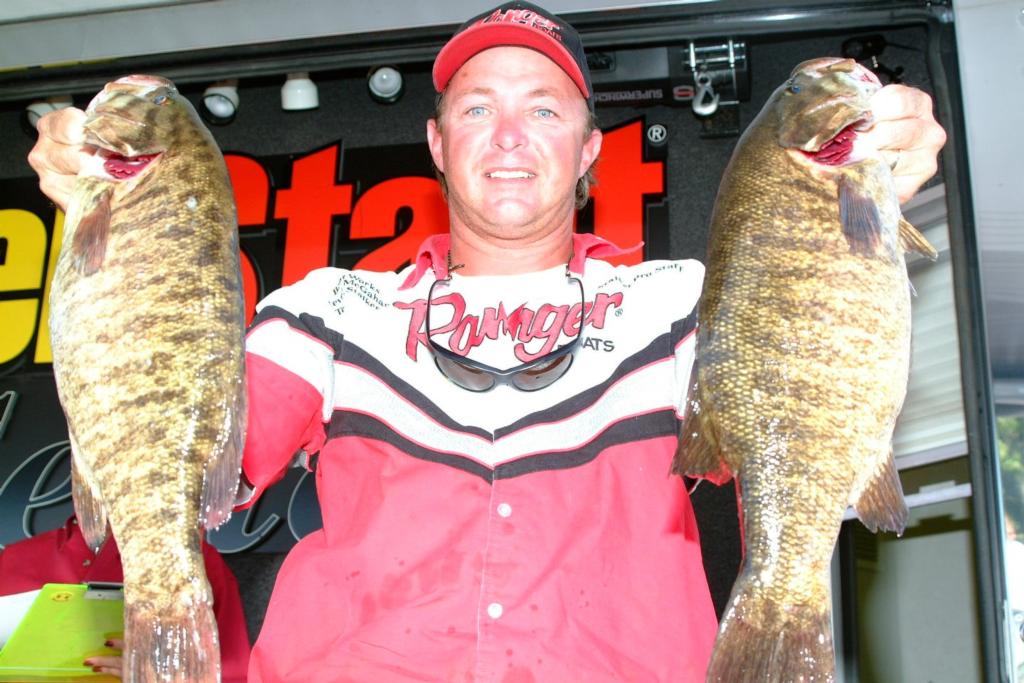 Steve McGahan of Gales Ferry, Conn., managed to distance himself from the rest of the pro pack after turning in a breathtaking catch of 19 pounds, 13 ounces. McGahan finished the day in first place. Photo by Gary Mortenson. Angler: Steven McGahan.
August 21, 2002 • Gary Mortenson • Toyota Series

CLAYTON, N.Y. – On a day where 15-pound stringers seemed like a dime a dozen, Steve McGahan of Gales Ferry, Conn., managed to distance himself from the rest of the pack after turning in a breathtaking catch of 19 pounds, 13 ounces. The secret? He just needed a little help from his friends.

Buoyed by longtime buddy and co-angler partner Chris Wade, McGahan went on to record a limit in less than an hour of fishing deep in the heart of the St. Lawrence River. Amazingly, the two were randomly paired up for today’s action despite the overwhelming odds against such a fluke occurrence.

“It feels awesome,” said McGahan of his first-place finish in today’s competition. “And I got to go fishing all day with my best friend. You can’t beat that.”

McGahan, who is currently eighth overall in the year-end standings in the EverStart Northern Division, said he knew almost immediately that he was going to have a good day.

“We started out fishing deep – in about 18 to 30 feet of water – and we both had our limits by 7:30 a.m. I probably had about 15 pounds at the time. And, after about another hour of fishing, we’re able to start heading back in. It was just a great day.”

McGahan, who used a Stalker finesse tube bait almost exclusively, said he definitely benefited from having one year of EverStart experience already under his belt.

“I’m finally starting to get into the swing of things at these EverStart tournaments,” he said. “I fished the Northern Division last year, but I didn’t really have my head together then. This year, though, things are looking pretty good.”

During tomorrow’s competition, McGahan said he would like to embark on the exact same strategy. However, he acknowledged that a change in the weather could put a damper on that plan.

“I’m going to try and do the same thing tomorrow, but I’m a little worried about the wind picking up,” he said. “My spot is out there on open water, and if it’s windy, I’m not sure I’m going to be able to fish it because it will be too dangerous. But if I can get out there and stay there for at least two hours, I should be able to bring back 18 or 19 pounds.”

Rodney Ellis of Greentown, Ind., won the day’s big-bass award in the Pro Division after landing a 5-pound, 6-ounce bass. Ellis, who finished the day in 63rd place, won $750 for his efforts.

While his friend and fishing partner McGahan was tearing up the pro ranks, Chris Wade of Preston, Conn., was demonstrating a little fishing savvy of his own. Using a catch of 18 pounds, 1 ounce, Wade not only gained the top spot in the Co-angler Division after the first day of competition, but he also managed to outfish 163 pro anglers in the process.

“It feels pretty good,” said Wade of his accomplishment. “I’m surprised I had that much weight, and I’m surprised it held up. But it was a pleasant surprise nonetheless.”

It was also a surprise for Wade to find out that he’d be fishing today with McGahan.

“It was pretty bizarre that we drew each other, but we’re definitely happy about it,” he said. “We fish a lot of team tournaments together and it was really nice to be out on the water with someone you really know that well. We’ve been friends for something like 14 years.”

Although this is his first year on the EverStart circuit, Wade already has notched one top-10 finish. And to be sure, he’s looking for more of the same on the St. Lawrence River.

“I came in fourth place at the last tournament on Lake Champlain. And I feel confident that, if I can get five bites tomorrow, I should be able to make the cut here,” he said. “Hopefully, if that happens, I’ll have a good shot at making the EverStart Championship in November. That would be great.”

Duane Rinkus of Amherst, N.Y., also put on quite a clinic in the Co-angler Division, finishing the day in second place and outfishing all but three pros. Rinkus ultimately recorded a catch weighing 17 pounds, 8 ounces.

Meanwhile, John Fawcett of Stow, Ohio, found himself in third place after bringing a 15-pound, 5-ounce catch to the scales.

Lloyd Block of Caruthersville, Mo., and David Smith Jr., of Edmond, Okla., finished the day tied for the big-bass lead after landing fish weighing 5 pounds, 2 ounces. Block, currently in 21st place, and Smith, who finished in 16th place, both received a check for $125.