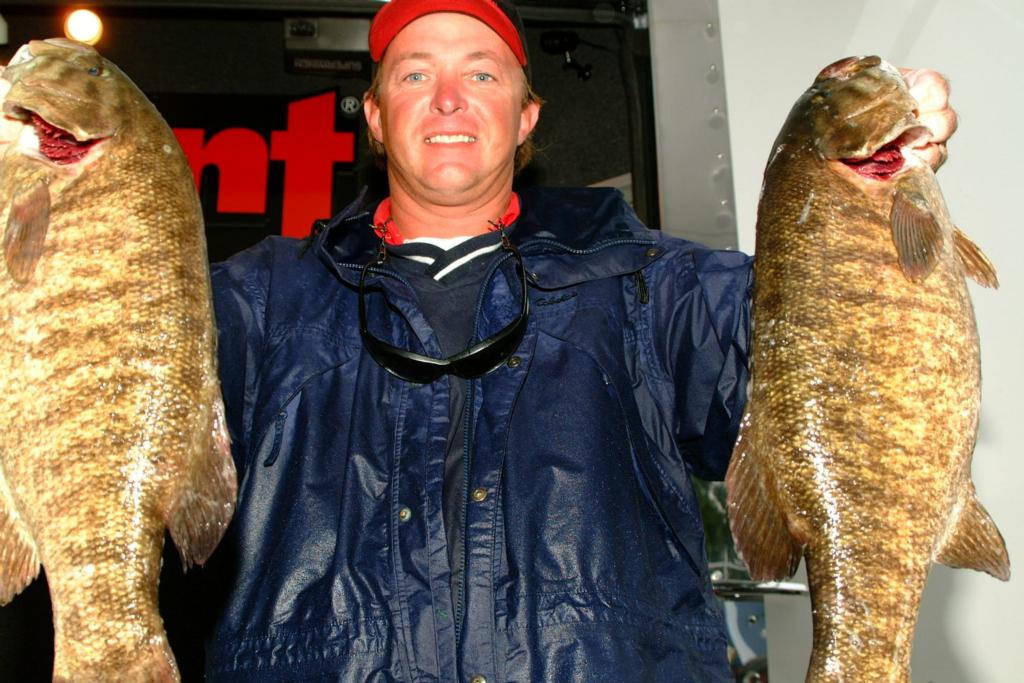 CLAYTON, N.Y. – Despite being hammered by incessant rains and strong winds, Steven McGahan of Gales Ferry, Conn., continued to put on a veritable fishing clinic for the rest of the field. McGahan, who led the Pro Division after day one with a 19-pound, 13-ounce catch, turned in another eye-popping performance in today’s competition with a five-fish sack weighing in at 20 pounds, 9 ounces.

Not surprisingly, McGahan’s monstrous two-day stringer of 40 pounds, 6 ounces made him the clear front-runner heading into tomorrow’s semifinal round of competition. However, if that news wasn’t bad enough for the rest of the pro field, McGahan said he hasn’t really even been tested yet.

“It took me about an hour and a half to catch my limit today. And those first five fish I caught weighed in over 20 pounds,” said McGahan, who again found success fishing the deep waters of the St. Lawrence River with a green pumpkin Stalker tube bait. “Once I had my limit, I just stopped fishing. I gave my partner my pole and let him go to it until he had enough to make the cut. We came in about noon and just tied our boat to a buoy near the marina and waited for weigh-in. I mean, why keep fishing when you already have 20 pounds in the boat?”

After netting two consecutive limits averaging 20 pounds in a little more than three hours of fishing, what does McGahan do for an encore in tomorrow’s competition?

“If it’s not too windy tomorrow and I can get to my area, I should be able to catch 22 or 23 pounds easily,” he said. “I haven’t even gone after my big fish yet. But the key is going to be me getting to that spot. If I can do that, I shouldn’t have any problems making the next round.”

McGahan, who continued his strategy of drift fishing over a 200-yard area of gradually sloping bottom terrain, said he is undoubtedly in a “zone” right now.

“This is just crazy fishing. Every time I see a mark on my graph, I just throw my tube bait down there and catch something,” he said. “And every fish we caught today was big. I was `high-fiving’ my partner all day. I think I must have an angel looking over my shoulder.”

On the strength of a two-day catch of 35 pounds, 5 ounces, Randy Ramsey of Battle Creek, Mich., was able to land a second-place finish heading into tomorrow’s semifinals. Third place belonged to Jonathan Rogers of Loudon, N.H., who recorded a total catch of 34 pounds, 3 ounces.

Meanwhile, Thomas M. Lavictoire of West Rutland, Vt., made absolutely sure that he would go home with the big-bass honors for the tournament after landing a behemoth 8-pound, 3-ounce largemouth bass. Lavictoire, who qualified for the semifinals in 16th place, won $750 for his efforts.

Despite fishing in the very first EverStart tournament of his career, Duane Rinkus of Amherst, N.Y., clearly showed he has what it takes to compete at this level. Using a two-day catch of 28 pounds, 3 ounces, the rookie leapfrogged from second to first place heading into tomorrow’s semifinals.

And to be sure, no one was more surprised by his performance than Rinkus himself.

“This is the biggest tournament of my career, and it’s the only (multiday) tournament I’ve ever fished in,” said Rinkus. “I didn’t do any prefishing, and I really didn’t have any expectations at all. I just came here to see what the EverStart tournaments were all about. But so far, it’s been great.”

Rinkus, who targeted largemouth bass today with a finesse worm, said he relied on his pro partners to help guide him through the tournament. And so far, the plan appears to be working to perfection.

“I was really hoping that I’d draw some good partners and that’s exactly what happened,” he said. “I made sure that I kept asking lots of questions about the type of fish we’re going for, what the bottom conditions were like and what type of lures they were using. Then I just sat back and observed for awhile.”

After getting a feel for his pro partners, Rinkus went to work.

“I basically tried to rely on my own experience and try to fish something different than what the pros were using,” he said. “But if they were really catching them, I’d switch up and start throwing the same thing my pro was using.”

However, now that the rookie tag is looking more and more like a misnomer, Rinkus said he is starting to feel the pressure.

“Because this is my first EverStart tournament, I’ve been pretty nervous,” he said. “I was really excited last night, and I’ll probably be even more excited tonight. I don’t think I’m going to sleep too well.”

For Rinkus, tomorrow’s strategy is simple.

“I just want to catch five fish tomorrow,” he said. “Then, we’ll see what happens from there.”

The day’s $250 big-bass award in the Co-angler Division went to John Pellegrino of Smithtown, N.Y. Pellegrino, who landed a 5-pound, 6-ounce bass and qualified for the semifinals in seventh place.