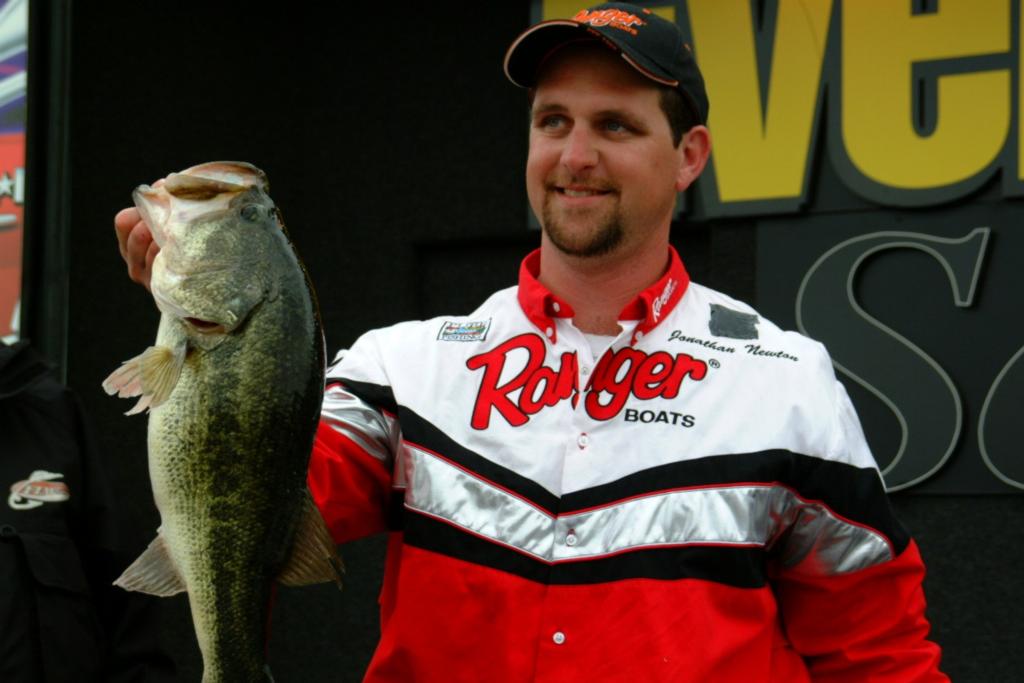 JASPER, Texas – It was cold, windy and downright miserable fishing in Friday’s semifinal round of the EverStart Series Central Division contest at Sam Rayburn Reservoir, but that didn’t stop Rogersville, Alabama’s Jonathan Newton from landing a nice five-bass weight of 17 pounds, 8 ounces to take over the Pro Division lead.

Temperatures never climbed above 40 degrees and the cold wind blasted at a steady 10 to 15 mph Thursday, making it rough on EverStart anglers out on the big reservoir. Some competitors came in reporting 6-foot swells and a few subsequently battled some boat trouble.

“It was miserable out there today,” local co-angler Bill Rogers said. “It’s amazing how many people showed up here (to watch) this week.”

It was rough, but the anglers still managed to catch some fish.

Newton took advantage of the windy conditions. Pitching a blue-and-black jig in shallow water, he focused on three areas sheltered from the wind.

“I think the wind helped me because a lot of people out in the grass couldn’t get out and get to it,” he said.

The Sam Rayburn water level dropped about 6 inches and fell about 3 degrees in temperature since Thursday, which caused havoc with many semifinalists’ patterns. But Newton said it helped him.

“In practice, my fish were up in the trees. They were so far back in there that I couldn’t get them,” he said.

The forecast is calling for similarly harsh conditions Saturday. As far as the cold is concerned, the hardy pro leader plans to stick to his shallow-water pattern Saturday to take advantage of the big females that are itching to spawn.

“I don’t think the cold is affecting the fish that much. They’re committed to coming in shallow,” he said. “It’s affecting me. It about froze my hands right off. It’s been miserable. This has probably been the worst two days I’ve ever spent on the water.” 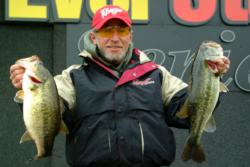 Pro David Truax of Beaumont, Texas, who qualified for the semifinals in second place, held onto the runner-up spot Friday with a four-bass weight of 15 pounds, 6 ounces.

It wasn’t an easy chore for him, however. Fishing a crawfish-colored Rat-L-Trap, Truax only had one bass in his livewell by 1 p.m., and his prospects began to look as bleak as the weather.

“My partner had five fish by the time I had one,” he said. “I already had my excuse speech planned, then I caught a 4-pounder at 2 o’clock. I hope I don’t have to wait that long for them tomorrow.”

While he caught a limit, Newberry said it was tough to come by: “Every day has been a change, and it’s been very difficult.”

Fourth place went to opening-round leader Trey Morgan of Goldonna, La., who weighed in five bass worth 12 pounds, 13 ounces. Morgan returned to the fruitful fishing spot that helped him gain the lead in the opening round and caught 10 keepers, including a 5-pound, 3-ounce kicker largemouth.

Fifth place went to Larry Sisk of Evansville, Ind., who caught the fourth and final five-bass limit of the day in the Pro Division. His fish weighed 10 pounds, 4 ounces. 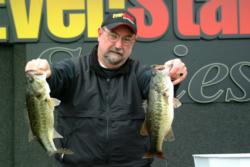 Barry Goen of Hartsburg, Mo., took the top spot in the co-angler semifinals with a five-bass weight of 11 pounds, 12 ounces. His was the only limit of the day in the Co-angler Division.

“It feels great,” he said. “I’ve been knocking on the door all week and I finally caught a five-fish limit.”

Goen, a division manager for Unilever, caught his bass by throwing a shad-color Lucky Craft in deeper water than his shallow-casting pro partner, Truax, was fishing. He had five bites all day and landed them all.

Jeary Wheeler of Batesville, Ark., who set an EverStart Series single-fish record Thursday with a monster 12-pound, 11-ounce largemouth, claimed the second spot in the Co-angler Division Friday with a three-bass weight of 5 pounds, 13 ounces.

Final-round action begins Saturday at 7 a.m. at Twin Dikes Marina in Brookeland. All competitors will restart the day with zero weight. The final weigh-in will be held at the Wal-Mart store located at 800 W. Gibson in Jasper beginning at 4 p.m.

The winning pro will take home a guaranteed cash award of $10,000 plus a new Ranger 519VS Comanche equipped with Garmin electronics and powered by an Evinrude or Yamaha outboard. If the winner is the original owner of a Ranger boat, he will receive an additional $10,000 cash bonus from Ranger for a total of $61,900 in cash and prizes. Ranger will also award an additional $3,000 to the winner if he is a Ranger Cup participant, and Garmin will award $1,000 to the winner if his boat is equipped with a fixed-mount Garmin Fishfinder or combination GPS/Sounder.