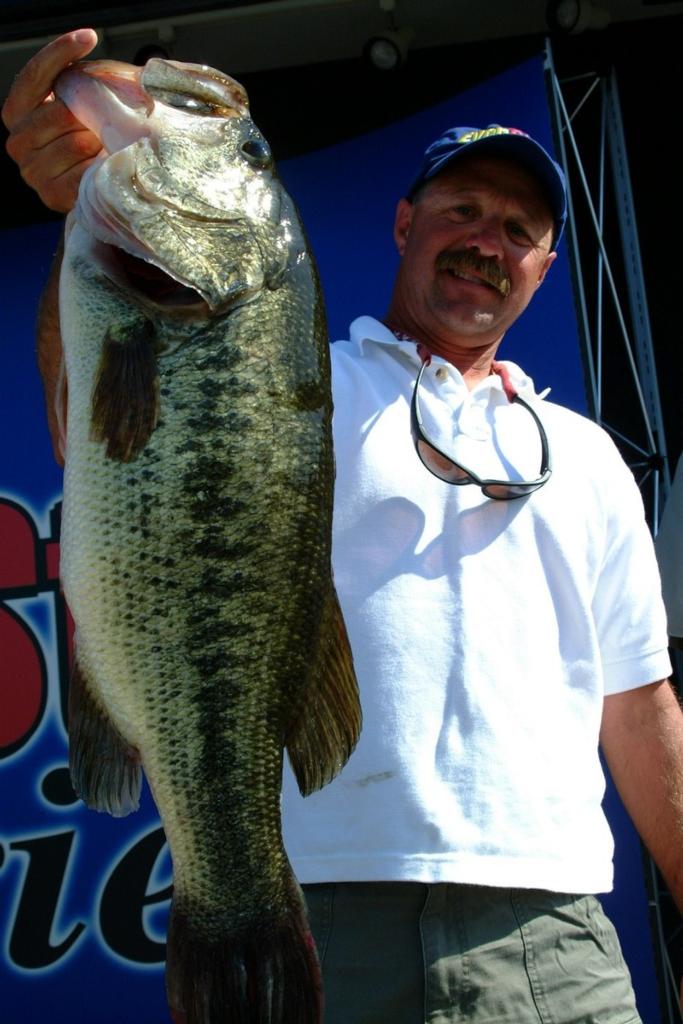 OAKLEY, Calif. – It was only a matter of time before the California Delta started living up to its reputation as one of the best bass fisheries in the world. And today was that day. And Bruce Harris was the lucky recipient. With one cast, Harris hooked into an 11-pound, 7-ounce behemoth largemouth bass that nearly left him speechless.

“It’s the biggest bass I’ve ever caught in my life,” said Harris of his eye-popping catch. “It was pretty cool. When I set the hook, I knew it was big, but I didn’t know how big. After I landed it, I couldn’t fish for about an hour after that I was so excited.”

Although Harris’ fish was the talk of the weigh-in, it didn’t quite set the record for an FLW Outdoors’ event. That record still belongs to co-angler Jeary Wheeler of Batesville, Ark., who recorded a 12-pound, 11-ounce largemouth on Feb. 6, 2003 at the Sam Rayburn Reservoir during an EverStart Central Division event.

As great as Harris’ 18-pound, 3-ounce total catch was, it still wasn’t enough to top the leaderboard in the Pro Division in today’s competition. That honor belonged to Gary Dobyns of Yuba City, Calif., who managed a gritty 20-pound, 8-ounce catch the hard way – by running and gunning and throwing caution to the wind. 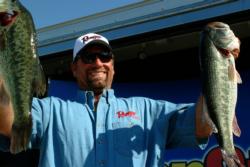 “I’m fishing really aggressively and I’m doing a lot of gambling out there,” said Dobyns, who admitted that he is ready to live and die by his gunslinger approach. “So far, I’ve had a great week. I’ve had a 6-pound plus bite every day, but I’ve also lost some good fish as well. I’m covering a lot of water. I’m really running and gunning out there.”

Dobyns – who is throwing Snag-Proof immitation frog top-water baits almost exclusively – acknowledged that his aggressive fishing style will either win him the tournament title handily or cause him to crash and burn in tomorrow’s finals.

“I’m fishing isolated spots and playing the tides,” he said. “I also have plenty of places where I can catch a limit, but only a few places where I’m getting the big bites. Tomorrow, I could bring in a gigantic limit or 10 or 12 pounds. But no matter what happens, I’m going to keep fishing this way because that’s the way I love to fish. It’s just my style to run and gun. And hopefully, my luck will continue to hold up.”

As one might expect, Bruce Harris of Oakland, Calif., is feeling pretty good about his performance on the California Delta this week. But he admits that it has almost nothing to do with the fact that he nearly set the FLW Outdoors record with his 11-pound, 7-ounce fish.

“I had my limit today by about 11 a.m.,” said Harris, who is flipping a variety of soft plastics to land the majority of his catch. “And I just stopped fishing after that because I really didn’t want to beat my fish up. I have some pretty good spots that are producing and I’m feeling pretty confident about my chances of winning the tournament right now. I’ve had a great week and I’m improving every day. I’m definitely going for broke in the finals.”

“I caught fish all day,” said Thompson. “And I’m catching both post-spawn and pre-spawn fish. Hopefully, I have enough good areas left for the finals.”

“I kind of struggled out there today,” said Strader. “But I’m catching fish on a little bit of everything. Hopefully, things will work out tomorrow.”

Louis Fernandes of Nipomo, Calif., used the second-largest stringer of the day to grab first place in the Co-angler Division heading into Saturday’s all-important finals. And he couldn’t have been happier.

“It’s awesome. I’ve very thrilled right now,” said Fernandes, who ultimately recorded a total catch of 19 pounds, 6 ounces. “This is definitely one of the best days of my career. It’s a dream come true.”

Fernandes, who is targeting weed beds and grass mats with a variety of flipping and power-fishing techniques, said he is excited about his chances during the finals.

“Today, I didn’t miss a bite and I’m catching a lot of fish every day,” he said. “I feel very confident I can win this tournament.”

Reed ready for start of finals

“It’s been awesome,” he said. “I was catching fish all day long. And I’ve had great partners all this week. Let’s see what happens tomorrow.”

Third place belonged to Robert Urchike of Chandler, Ariz., with a catch of 13 pounds, 13 ounces.