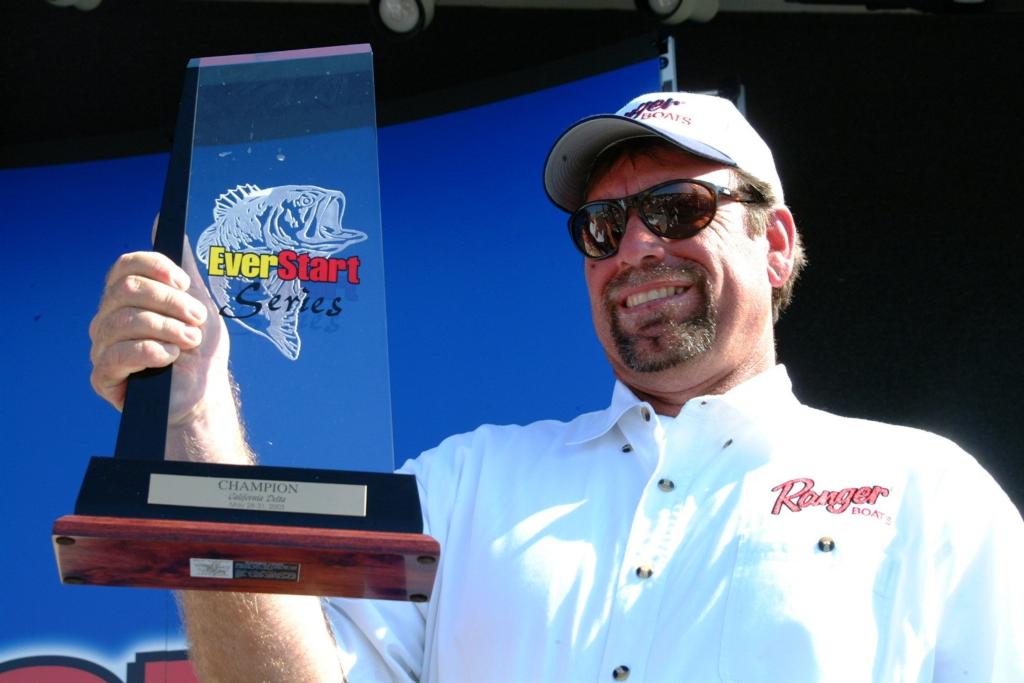 OAKLEY, Calif. – Heading into Saturday’s finals, day-three leader Gary Dobyns of Yuba City, Calif., said he was going to continue his high-stakes gambling approach towards tournament bass fishing whether it cost him a title or not. As it turns out, he need not have worried. When all was said and done, Dobyns turned up all aces in today’s finals, producing an 18-pound, 1-ounce limit good enough to win the tournament title on the California Delta by nearly 4 pounds.

“I just had a really good day,” said Dobyns. “I made some really good decisions on the water. I abandoned my two primary spots today because I figured that I had already fished them out. Instead, I went to a spot that I was saving for the finals. I caught a 6-pounder at about 7:30 a.m. and had my limit fish a few minutes later. I knew that I needed to have that big bite today and I got it. It was just a great tournament.”

Dobyns, who threw a black, Snag-Proof imitation frog top-water bait and Trixie Shad to land the majority of his catch, said the key to his success was fishing fast.

“I really covered a lot of water today,” he said. “Like I said yesterday, I like to run and gun. And today, the conditions couldn’t have been better for me. It just really played into my hands. It was a lot of fun out there.”

Not surprisingly, Dobyns said that he couldn’t have asked for much more.

“I’m really starting to like these EverStarts,” he said. “I had four good partners. I caught about 25 fish a day. Overall, it was just a really great week.”

FLW Tour veteran Andre Moore of Scottsdale, Ariz., found today’s finals a tad bittersweet to say the least. On the one hand, it was tough to get so close to a tournament title and then watch as it slipped away as the very last angler (Dobyns) weighed in. However, on the other hand, Moore knew that he was somewhat lucky to be in the finals in the first place, qualifying in the 10th and final spot by a mere 2 ounces. 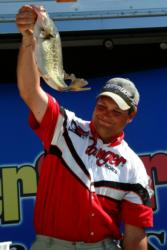 “I think this is the third time I’ve finished second to (Dobyns) in the finals,” said Moore, who landed a total catch of 14 pounds, 8 ounces. “But overall, I really can’t complain. My goal was to just come down here, go top-water fishing and have a good time. I never really thought that 14 pounds would be enough to win.”

“I probably caught about 40 fish today,” Moore continued. “But I just wasn’t able to get that big bite.”

Moore, who fished a homemade Trixie Shad and a Super Spook to land the majority of his catch, won $6,800 for his efforts. 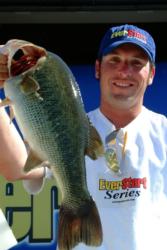 Brett Hite of Phoenix, Ariz., continued his stellar run on the 2003 EverStart Series trail, turning in the third consecutive top-20 appearance. Using a catch of 14 pounds, 7 ounces, Hite grabbed third place overall at the California Delta event, good enough for a check for $6,100 in prize money.

“I’m pretty excited,” said Hite, who had already recorded a first-place finish at Lake Pleasant and an 18th-place finish at Clear Lake in the only other two EverStart tournaments he has fished all year. “I kind of struggled out there this morning. And I worked on a bed fish (unsuccessfully) that probably weighed between 10 and 12 pounds for about two hours. I could have made some better decisions out there. But if I catch that fish, I win the tournament. Overall though, I had a great week.”

Zack Thompson of Orinda, Calif., used a total catch of 12 pounds to grab fourth place and a check for $5,400.

“It got a little tougher for me too today,” said Thompson. “I was averaging about 15 to 20 fish all tournament, but today I only had about nine fish. I was only fishing a couple of key areas, and I think they kind of got beat up a little bit. But I wound up catching a lot of fish this week, and overall, I had a real good tournament.”

Bruce Harris, who caught the largest fish in the tournament (an 11-pound, 7-ounce largemouth) in yesterday’s competition, finished the finals in fifth place with a catch of 11 pounds, 10 ounces. Harris, a resident of Oakdale, Calif., won $4,900 for his efforts. 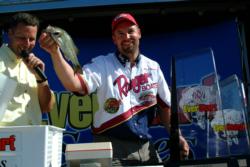 As a result of his 41st-place finish on the California Delta, Brent Ehrler of Redlands, Calif., won the 2003 EverStart Angler of the Year title in the Western Division.

This Calfornia Delta event concludes the regular-season tournament schedule for the EverStart Western Division. Anglers who finished the year in the top 30 in the year-end standings will be invited to the 2003 EverStart Championship – slated for Oct. 29-Nov. 1 on Old Hickory Lake near Gallatin, Tenn.