The Art of fishing 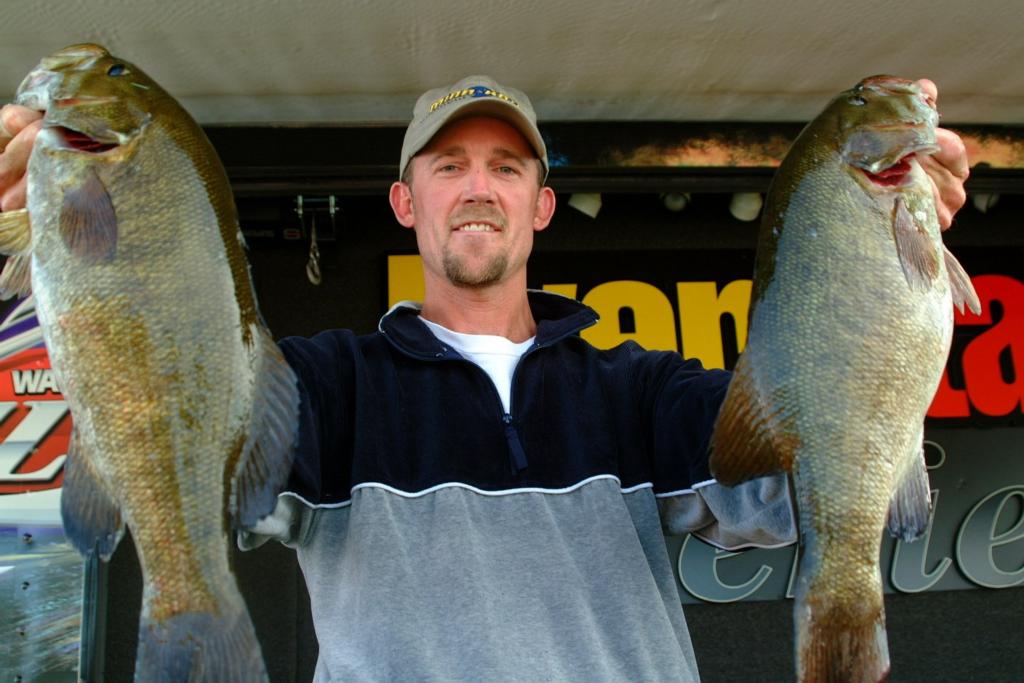 PLATTSBURGH, N.Y. – Art Ferguson of St. Clair Shores, Mich., couldn’t have asked for a better birthday present. Not only did he qualify for tomorrow’s pro finals with an outstanding catch of 17 pounds, 6 ounces, but he also managed to land the day’s biggest stringer. Clearly, it was one happy birthday, indeed.

“Today is my birthday and I was really blessed,” said Ferguson, who is gunning for the first EverStart title of his career. “I feel really good about my chances. I’m on a roll and I feel like I’ve got a good rhythm going. I’ve been catching fish in different spots every day. I’ve caught them on the bottom and I’ve caught them on the top. I just hope I catch them tomorrow.”

Ferguson said the key to his success this week has been his versatility.

“I’ve really been fishing with an open mind,” he said. “In the past, I might not always have done that. But I’ve managed to adapt every single day. And I think that’s really helped me.”

Ferguson said he is targeting bass in about 5 to 8 feet of water with a combination of flukes, top-waters, Senkos and tube baits. However, Ferguson said that his main bait has been a Mizmo tubebait that he helped design.

“I call it, the `Work of Art,’ tubebait,” he said. “Basically, it’s a special watermelon-type color with a variety of speckled flakes. It really sparkles and works great on sunny days in clear water – which Lake Champlain has a lot of. But I’ve also recently discovered that it works well on overcast days as well.”

Because Ferguson has had good luck fishing a variety of different locations and lures, he said he isn’t quite sure what to expect tomorrow. 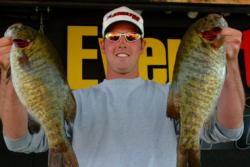 New Hampshire fishing guide Joe Lucarelli has been one of the most consistent anglers on the tour all week. After logging a 17-pound, 2-ounce catch in the opening round of competition, Lucarelli came right back and landed a 17-pound, 3-ounce stringer in the semifinals to finish the day in second place. And he did it all with nary a largemouth bass.

“I’ve been targeting smallmouth bass exclusively all week and, so far, it’s working out,” said Lucarelli of Meredith, N.H. “Overall, I feel pretty good. I had my limit today by 10:30 a.m., but I’m kind of moving around a lot.”

Lucarelli said that he’s using a variety of Yamamoto baits to target smallmouth bass in about six or seven different areas.

“I’m kind of fishing all over the place,” he said. “I’m targeting all different types of cover. But I’m not sure what’s going to happen tomorrow. I could catch 15 pounds at my first spot tomorrow or catch nothing. With smallmouth bass, you just never know. But I still have a few tricks up my sleeve. I’m really looking forward to seeing what happens in the finals. I’m definitely not going to put any pressure on myself.” 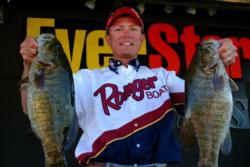 Randy Ramsey of Battle Creek, Mich., used a 16-pound, 4-ounce catch to qualify for the finals in third place. However, he acknowledged that had it not been for Mark Zona, a fellow competitor who also qualified for the finals, he might never have gotten the opportunity to fish for upwards of $62,000 in tomorrow’s finals.

“I owe a lot to Mark Zona,” said Ramsey. “He gave me an area to fish, and it’s really been working out.”

Allen Cauthen of Lancaster, S.C., relied almost exclusively on a Carolina rig to net a 15-pound, 10-ounce stringer and qualify for the finals in fourth place. 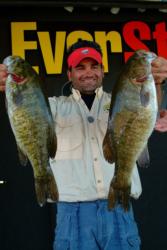 After taking home a second-place finish and a check for $20,000 at the FLW Tour’s Forrest Wood Open tournament on Lake Champlain in 2002, Jeff Baffa of Tinley Park, Ill., became an instant fan of upstate New York’s bountiful fisheries. However, after landing a catch of 16 pounds, 14 ounces in today’s competition to grab the top qualifying spot in the Co-angler Division, Baffa just might want to consider taking up permanent residence here.

“I love this lake. I think it’s my favorite lake of all time now,” said Baffa. “It’s just been an unbelievable week. I don’t know what else to tell you. I think I’m more nervous now than I was at the Forrest Wood Open. I’m still shaking.”

Baffa said he is gaining confidence with each passing day.

“I caught my limit by 9 a.m. this morning, and I basically sat down the rest of the day and helped out my pro partner,” said Baffa. “But hats off to my partner Randy Ramsey. He let me throw my baits wherever I wanted today. He brought me to a great spot and we stayed there all day.”

Baffa said that he used a combination of Lucky Craft jerkbaits – a Deep-diving 78 and Pointer 100 – to land the majority of his catch.

“We were on a big flat and the fish were everywhere,” he said. “We’re casting in every direction. But the key for me was throwing my bait perpendicular to the wind. When I did that, I caught fish.”

Baffa said he and his pro partner targeted smaller bass in 6 feet of water and “bigger fish” in anywhere from 18 to 20 feet.

“But the best moment came when I hooked into a 4-pounder,” he said. “It went under the boat, and when it came up, two big fish were following it. I yelled to (Ramsey) to throw his bait toward the fish. He made a quick cast over towards me and right away he ooked into a good fish. We spent the next few minutes scrambling around trying to net the other guy’s fish.” 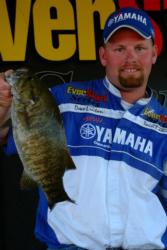 Dave Linton of Twin Lakes, Wis., qualified for the co-angler finals in the runner-up position after landing a healthy 15-pound, 7-ounce stringer.

“I’m really excited,” Linton said. “I learned a lot from my pro today and I was lucky to get five good bites. I’m kind of nervous right now. I don’t know if I’ll get much sleep tonight.”

Kevin McClurg of Huntertown, Ind., used a 13-pound, 5-ounce catch to qualify for the co-angler finals in third place. 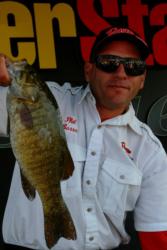