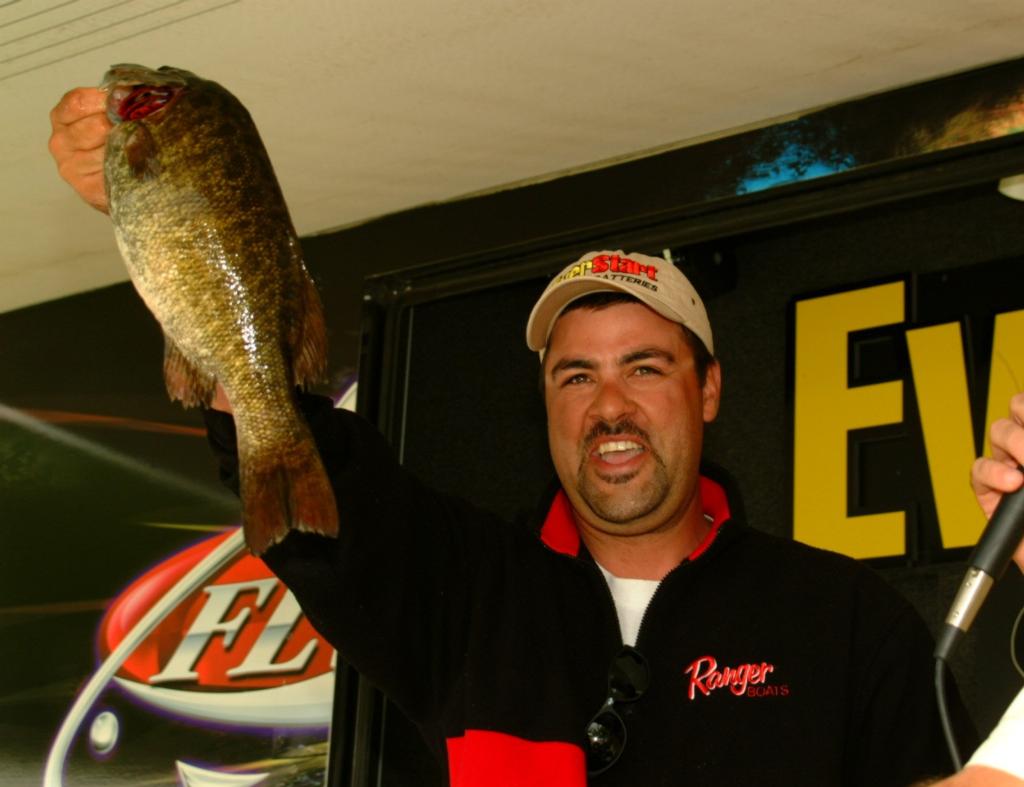 Consistency is the name of the game in points competition on the EverStart Series. Sure, every tournament champion enjoys the renown and cash rewards that come with a single win, but it’s the anglers who consistently make cuts and cash top-10-sized checks that fellow anglers watch out for.

And they also win standings titles. The four pros who won their respective EverStart Series division titles did so even though not a single one of them actually won a tournament. Despite that, theirs were the most consistent performances of all.

Wesley Strader of Spring City, Tenn., has been a solid angler up and down the BFL, EverStart and FLW ranks for close to five years. He’s won two FLW Outdoors tournaments, an FLW in 2002 and a BFL in 1997, and has consistently ranked high in the standings on all three circuits.

This year, he started the Eastern Division season at Lake Okeechobee well, finishing 30th, and never looked back from there. He won the Eastern Division pro points race by notching three top-10 finishes in the last three tournaments while at the same time fending off one of the tour’s hottest anglers.

After Okeechobee, Strader went to familiar territory at Lake Martin. After catching just two bass on day one and scrambling to make the opening-round cut, he found fish the last two days and finished the week in eighth place.

The pro who won at Lake Martin, Tony Christian of Hull, Ga., would become Strader’s strongest competition in the points race. Christian came off a record-setting year in the BFL’s Savannah River Division in 2002 and, after a top-10 at Okeechobee and the win at Lake Martin, looked poised to continue rolling through the EverStart Eastern Division. He also went on to win the 2003 BFL All-American. 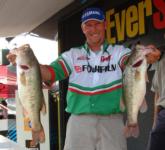 But Strader stayed steady, finishing sixth at big-bass Santee Cooper lakes in the third event of the year. Christian – by his lofty standards – faltered when he finished in 19th place at Santee Cooper, but he still led Strader in points.

By the final tournament at Guntersville Lake, the race for the standings title was tight.

“It was there for him to lose,” Strader said. “Either he was going to catch them (at Guntersville) or he wasn’t. And I know he fishes the jig well.”

Strader took control of his own destiny at Guntersville by rising to a second-place finish – the fourth in his EverStart career – and slammed the door on the standings title with 758 points. Christian finished the week in 67th place and closed the season a distant second in the standings with 710 points.

“It feels great,” said Strader, who came close to a previous points title in 2001 when he finished second in the Central Division. “It’s the first time I’ve ever won the points, and it’s just an accumulation of hard work over the whole season. It’s definitely a sense of satisfaction.”

In all four Eastern Division tournaments, Strader caught a five-bass limit on every day of competition he fished except one, the first day at Lake Martin.

By most accounts, Craig Powers should have won the Central Division standings. The pro from Rockwood, Tenn., finished the last three tournaments in fifth, third and seventh place, respectively. But a minor slump at the first tournament, Sam Rayburn Reservoir, landed him in 32nd place. 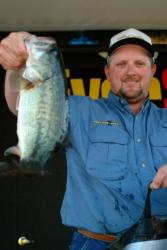 Enter Jackie Davis. The pro from Willard, Mo., fishing in his first full year on the EverStart Series, only beat Powers in one Central tournament all season, but that was all he needed to win the standings.

The key was that first tourney at Sam Rayburn. While Powers finished in 32nd place, Davis racked up the first of his four semifinal-round appearances of the season and finished the week in 11th place. The points that Davis gained on Powers in the first tournament proved to be the difference in a standings race that was much tighter than the Strader-Christian showdown in the Eastern Division.

With Davis out to an early lead, Powers roared back with a fifth-place finish at Pickwick Lake. Still, he didn’t gain much ground because the steady Davis finished the second tournament in 11th place.

At the third event, Kentucky Lake, Powers finished in third place, in the process showing why he loves coming to the West Tennessee River impoundment. But Davis still yielded almost no ground when he made the final cut himself – his only one of the year – and finished sixth.

At the fourth and last tournament, the Red River, Powers looked poised for a comeback standings victory. He’d already won an FLW on the Red in 2001 is one of the tour’s most dogged river rats. He didn’t disappoint, either, when he led the event after the opening round.

But Davis followed right behind him, making his fourth cut into the semifinals. Things heated up when Davis’ luck with his shallow jig technique ran out and he just missed the final cut Friday by one place. For the second time this season, he finished in 11th place.

“I just missed the top 10s almost every time,” Davis said. “I was always just one fish away from making it.”

That left the door open for Powers, who made the Red River finals. He trailed Davis by 10 points and needed nothing less than a win to take the points title.

“Jackie Davis has been the most consistent bass angler on this side of the EverStart Series,” a sportsmanlike Powers said that Friday. “If it comes down to it and he doesn’t win the points title, it’s not right.”

In the end, it came out right for Davis. As he observed helplessly from the sidelines, Powers weighed in just four bass Saturday and finished seventh. Davis won the points race with 763 points and Powers finished a close second with 757.

While Powers won three of their four battles, it was the more consistent Davis who won the war.

“When it came down to that last day, I was really disappointed that I didn’t make the cut because I was on enough fish to win it,” Davis said. “But I was just happy to be in a battle with Craig and happy to come out ahead.” 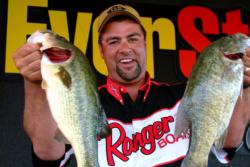 In what must have been the most excruciating standings victory on record, Sturgis, Michigan’s Mark Zona won the Northern Division with a total of 735 points. He beat Randy Ramsey of Battle Creek, Mich., who finished with 729 points.

But the race wasn’t nearly as close as it looked. The reason: Zona almost won three of the four Northern tournaments this season. The Z-Man, as some people call him, finished in second place three times in 2003. Consequently, like Tommy Biffle once was known as “Mr. Runner-up” before he won on the FLW Tour, Zona’s name has become synonymous with second place on the EverStart Series.

“You know what’s sad? I was at a regional tournament a couple weeks ago and I overheard someone say, `Man, I Zona’d today,'” he said, half laughing, half grimacing. “Dude, I’m like the Cubs.”

For the record, Zona finished second at lakes Vermilion, Erie and Champlain – respectively the first, second and fourth stops in the 2003 Northern Division. In between, he sandwiched a 63rd-place finish at the Detroit River. At Vermilion, he lost by 1 ounce to Manteo, North Carolina’s David Dudley, who, incidentally, also went on to win the 2003 FLW Championship.

By contrast, Ramsey had a solid season, too, with two top-10s and one top-20, but it was a far cry from Zona’s three-times-a-bridesmaid routine.

Still, in tournament fishing, there’s absolutely no shame in second place; it just doesn’t garner as many headlines. And Zona – whose license plate reads “Zona-2” – probably knows better than anyone else just how special an achievement, and lucrative, it is to finish second. And to do it three out of four times is simply remarkable.

“I’m not trying to be politically correct, but anytime you take second against these guys, it really is an honor,” he said. “I’d love to win one – and maybe someday I will – but until then I’m going to keep taking these seconds to the bank.”

What Zona banked on most during the smallmouth-heavy Northern Division in 2003 were large deposits of largemouths, of all things. While many of his competitors were plying the deep northern lakes for their abundant smallmouth bass, Zona said he keyed on bigger largemouths throughout the season. He credits that single strategy for much of his success.

“It’s not that easy to win the standings, and now I can say that I did it,” he said. “And I’ll also say that largemouth played a large part of it.” 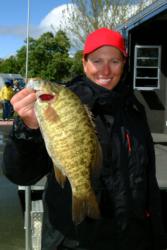 If anyone knows the bittersweet sensation of Zona’s string of seconds, it’s Brent Ehrler. The pro from Redlands, Calif., also nearly won three out of four tournaments. But instead of second place, he posted third-place finishes in three consecutive tournaments to win the inaugural Western Division season standings.

Unlike Zona, Ehrler notched his string of top finishes right out of the chute and took firm control of the standings early. He finished third at the first three Western tournaments – respectively held at lakes Pleasant, Mead and Clear. It wasn’t until tour stop No. 4, the California Delta, that Ehrler’s momentum slowed and he finished 41st.

“At Pleasant I felt great. I’ve been there several times and I have some prior knowledge about the fishing,” he said. “I always seem to do well at Lake Mead, especially in the prespawn. I was disappointed there because I had the fish locked on to win it and I just couldn’t get them. Clear Lake was good because it was just my third time there. But I knew the Delta was going to be tough because I just don’t know it very well.”

Nevertheless, in terms of the points, Ehrler had lots of room for error by the last tournament. He beat second-place Clint Johanson of Benton City, Wash., in the final standings by 27 points, but, in reality, his lead was much larger prior to the last event. Ehrler finished with 754 points and Johanson with 727.

“It’s awesome,” Ehrler said of winning the first-ever Western Division standings title. “It’s my biggest accomplishment on a major circuit yet, and it feels great. To put three of those tournaments together like that made for an awesome finish. I’m so happy that (FLW Outdoors) came out west this year. We needed a circuit like that.”

And if, for any reason, he should begin to feel the pain of having come so agonizingly close to victory so many times without closing the deal, at least he has company. He will meet and compete against Zona – as well as the rest of the division champions – in the upcoming EverStart Championship at Old Hickory Lake.