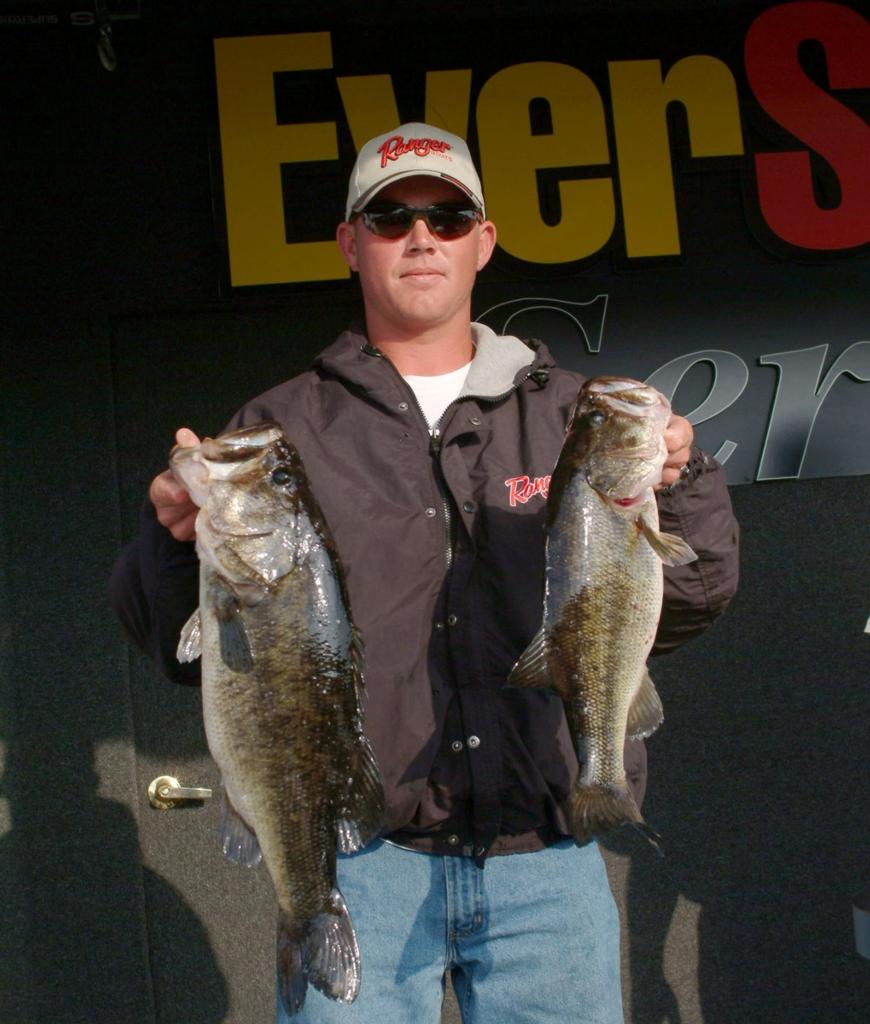 “I’m not got going to lie to you, I’ve got the shakes,” said a seemingly composed Schwier after taking a 4-pound lead over the competition.

That 4-pound lead is important, too. Starting this season, EverStart Series finalists will accumulate their weight over days three and four. In years past, the top 10 would be starting from zero tomorrow. But thanks to the rule change, Schwier can rest a little easier tonight.

“I feel pretty good about tomorrow,” he said. “I think I can catch the same kind of weight again.”

Schwier has been saving a place that he never fished during the preliminary rounds because of the wind and mechanical difficulties. He survived the cut days fishing elsewhere and went to his honey hole today.

“I’m casting a 10-inch worm,” he said. “The fish are bedding in there. I’m not sight-fishing them, I’m just making long casts to cattails. I caught seven keepers out of there today.”

Schwier says he plans to start in his hot spot tomorrow, but if it does not pan out, he has got another place like it that is holding fish. 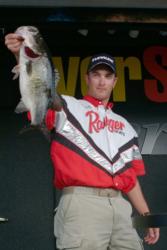 Pro Anthony Gagliardi of Prosperity, S.C., is in second with 14 pounds, 7 ounces. He is the closest person to catching Schwier tomorrow.

Gagliardi has been blind casting and sight-fishing to catch his fish.

“Today I sight-fished for my better fish,” he said. “There has been so much pressure in this one area that I am really having to work the fish to get them to bite. It’s getting harder and harder to just blind cast and catch them.”

Gagliardi knows he will need a big fish to have a chance at Schwier.

“There’s plenty of fish in this area,” he said. “But I don’t think there’s enough quality to catch the leader. I’d really need to catch a big one to have a shot.”

J.T. Kenney of Frostburg, Md., might as well be the Mayor of Lake Okeechobee. After two national wins on the lake in as many years, he is now in third place in the EverStart event with 13 pounds, 9 ounces.

If anyone knows how to pull out an Okeechobee win out of the hat, it’s Kenney. But he says his magic stick didn’t work too well today.

“I have been fishing open pockets in eelgrass for bedding fish the last two days,” he said. “Today I went flipping the thick stuff down south for big fish, and that’s all I came up with. There aren’t any great big ones under those mats. I figure the best string I can catch down there would be about 16 pounds.”

Doug Vest of Okeechobee, Fla., had hoped to survive today’s cut to take advantage of an impending front that is suppose to bring wind and rain to the area tomorrow.

He easily survived the cut with 12 pounds, 6 ounces and now sits in fifth place. But with a 6-pound deficit, it might be difficult to make up ground on Schwier now. If Vest catches a huge stringer tomorrow, it could be a hometown showdown in the Wal-Mart parking lot.

Edward Adams of Egg Harbor, N.J., leads the Co-angler Division with 14 pounds, 8 ounces. He enjoys a 3-pound lead over his competition.

Adams said his success today was the result of having a pro that fished slow.

“A lot of fishing in the back of the boat is adapting to the speed of the pro’s fishing pace,” Adams said. “The last two days, my pros fished kind of fast. But today I fished with Hank Cherry, and he fished slow and I was able to fish a worm the way it needs to be fished.” 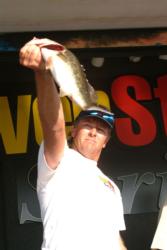 Rounding out the top five in the Co-angler Division are Rodney Marks of Apopka, Fla., in second with 11 pounds, 1 ounce. Last year’s Lake Okeechobee EverStart co-angler champion Asa Godsey of Clewiston, Fla., is in third with 7 pounds, 5 ounces. Billy Cason of High Springs, Fla., is in fourth with 6 pounds, 8 ounces. And Ken Crumpler of Marianna, Fla., is in fifth with 6 pounds, 6 ounces.

The top 10 pros and co-anglers take off tomorrow from Okee-Tantie Recreation Area at 7 a.m. for the final round of competition.