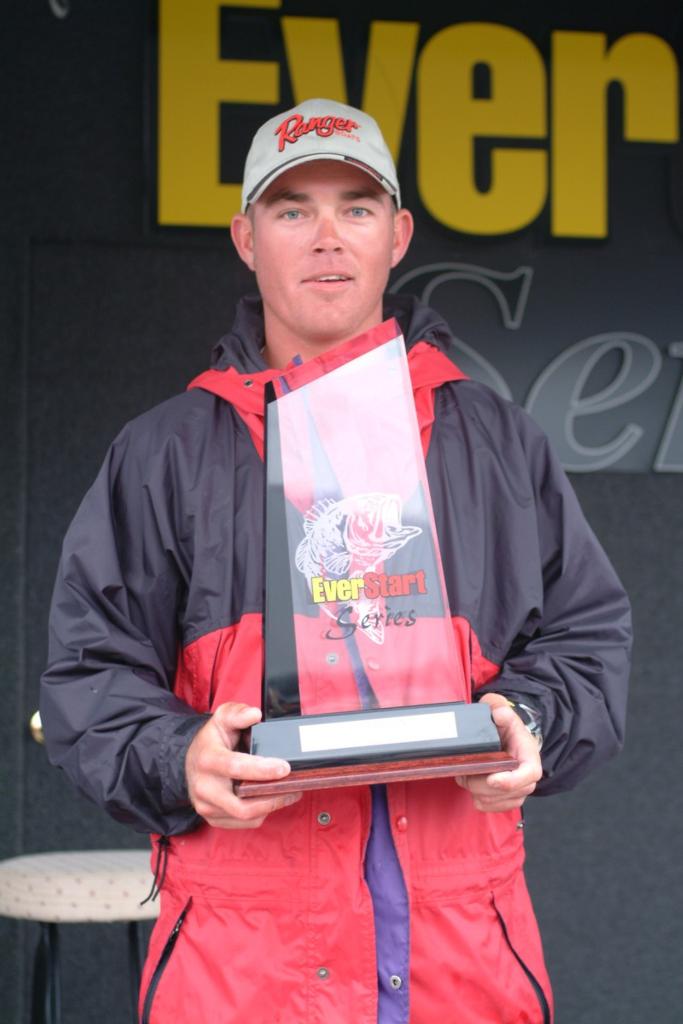 Justin Schwier of Okeechobee, Fla., needed nearly every ounce of his 4-pound cushion to win. He had a two-day total of 26 pounds, 12 ounces. Photo by Rob Newell.
January 10, 2004 • Rob Newell • Toyota Series

EverStart tournament leader Justin Schwier of Okeechobee, Fla., caused his hometown crowd to erupt with cries of joy today when he brought in 8 pounds, 4 ounces of bass to fend off a hard charge from runner-up Chad Morgenthaler of Coulterville, Ill.

Schwier ended up with a two-day total of 26 pounds, 12 ounces to win the first EverStart Eastern Division event of the year. He won $10,000 cash and a fully-rigged Ranger Boat for the victory.

The 22-year-old EverStart rookie had a 4-pound lead over his competition when the final weigh-in started this afternoon. Things got interesting when Morgenthaler hauled up 14 pounds, 1 ounce of bass to grab the lead until Schwier mounted the stage. 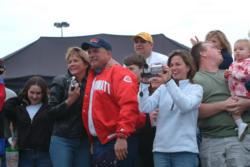 The local favorite needed all five bass in his bag to overtake Morgenthaler. When he did, his family and hometown fans went nuts.

“This feels great,” said Schwier. “This is the first time I’ve won a big tournament. I woke up shaking and I’m still shaking. It hasn’t stopped all day.”

Schwier fished a combination of spinner baits and 10-inch worms in the Monkey Box and Eagle Bay areas to catch his fish over the last four days.

Early in the week he used a 1/2-ounce War Eagle spinner bait, white with silver blades, to catch his limits. Today, however he had to go strictly to the worm, which was a 10-inch redbug Zoom worm teamed with a 3/16-ounce Gambler Rattling weight.

“I started with the spinner bait this morning. After going fishless for 30 minutes, I went to the worm and probably caught 10 to 15 keepers during the rest of the day.” 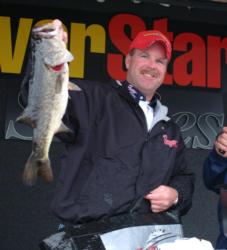 Chad Morgenthaler got the unofficial comeback-of-the-day award today by finishing second with a two-day total of 26 pounds, 4 ounces.

He started the day in sixth place with a 6-pound deficit. His five-bass limit brought him to within 8 ounces of an EverStart victory.

“It hurts to make such a charge and come up short.” Morgenthaler said. “But I had a great tournament, and it has started my year off on the right foot.”

“I never could catch the fish doing the same thing everyday,” he said. “I had to keep switching tactics. I was in a bedding area, and I thought fish were moving in there to spawn, but they never got on the beds.”

On the first day, Morgenthaler scored on a junebug Tiki Stick. On the second day, he had to switch to flipping mats with the Grass Craw to get bites. On the third day, he caught bass both ways. Today he went back to the Tiki Stick.

“Normally I fish the Tiki Stick weightless with a 4/0 Xpoint hook,” he said. “But today I had to peg a tiny 1/16-ounce weight on the line to get it to fall in the wind. The big keys for me on the Tiki Stick were making extra long casts and fishing it dead slow.”

Vest was one 2-pound fish short of winning the EverStart event.

“That big fish was my first bite of the day,” he said. “I actually had her on and lost her yesterday afternoon. I went straight back to the same mat this morning, made the same pitch and she bit again, except this time I got her in the boat.”

Vest started each morning by Carolina rigging for a small limit, and then he went flipping a 4-inch Crawdaddy with a 1-1/2-ounce tungsten weight the rest of the day to catch big fish.

“I like to get a limit of small fish early to kind of settle me down because it helps me flip slower,” he said. “Because of the wind this morning, I couldn’t get on my Carolina rig spot right, and I kept thinking about that big fish. So I scratched my limit spot and went flipping all day.”

Kenney cast a worm in eelgrass the first two days and then switched to flipping mats the last two days to catch his daily limits.