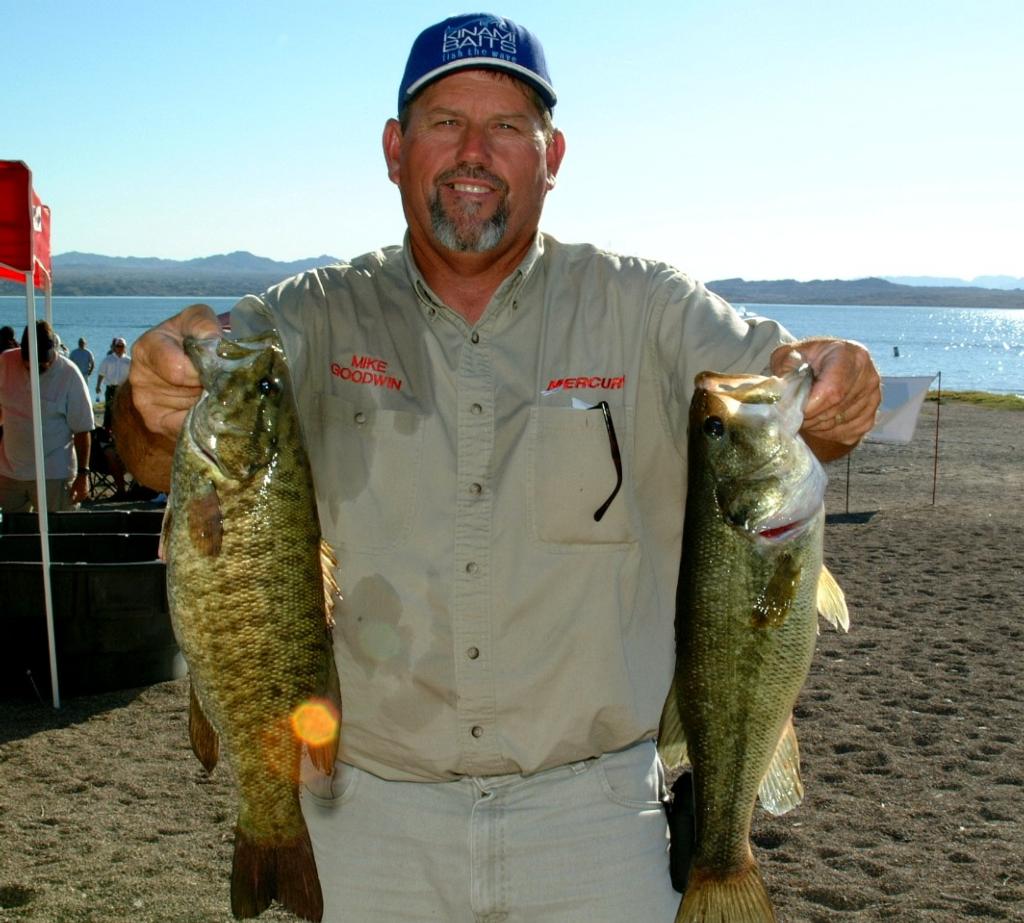 LAKE HAVASU CITY, Ariz. – As expected, it was a banner opening day in EverStart Series Western Division competition at Lake Havasu. While the two heaviest sacks of bass were caught by co-anglers, it was a local, Mike Goodwin of Lake Havasu City, who led the charge in the Pro Division Wednesday with a limit weighing 15 pounds, 7 ounces.

Goodwin said he caught “probably 15 bass” using “three or four different baits.” Having competed in just two prior Western Division events, he readily admitted that his local advantage helped him out on this well-trafficked waterway.

“I live here. This is my lake,” he said. “Me and my brother dominate this lake.”

In FLW Outdoors competition, Goodwin has a 2000 Wal-Mart BFL Colorado River Division victory under his belt – at Lake Havasu – plus he said that he’s earned a few local tournament victories as well. With so many anglers catching limits, Goodwin said the secret to popping a leading 15 1/2 sack had a lot to do with knowing how to approach this fishery, which is a spawning hotbed right now. Many of the top pros moved away from the supershallow bedding bass – which have been pounded by anglers in practice and aren’t necessarily biting as well – and went deeper for out-of-sight bass that are less likely to have a case of sore-mouth.

“I started on the beds and caught a couple,” he said. “Then I just kept moving off the bank, and the bigger fish started biting. We ran all over the place; we covered a lot of track. I caught them all day long, and I feel great about it. The conditions are just getting better and better. The water’s about 61 to 62 degrees and it’s getting warmer. When that happens on this lake, the fish just bite.”

Jason Cordiale knew it was going to be a good week when, a week ago in practice, he caught a 3 1/2-pound bass on his first-ever cast at Lake Havasu. The rookie EverStart pro from Orinda, Calif., slid into second place right behind Goodwin Wednesday with a five-bass weight of 15 pounds, 5 ounces.

“I’m feeling great. Pretty much everyone was sight-fishing, so I had to run-and-gun and find new fish all day long,” said Cordiale, who added that he didn’t even look at a bass if it appeared to be less than 2 pounds. “More and more largemouths are coming up, and it’s just getting better and better.”

Like the leader, third-place pro Todd Woods of Murrieta, Calif., laid off the largemouths he could see in the clear water and mainly went after less-visible fish.

“I’m not fishing the obvious stuff,” said Woods, who is also competing in his first EverStart tournament. “I’ve got about 60 spots on my GPS, and about a third of them had boats on them today. I’m fishing a deeper smallmouth pattern, and I caught a few largemouths with long casts in the back of coves.”

Woods said that he caught about 10 to 15 fish using mostly a pumpkin-colored Gitzit. His eventual limit weighed 14 pounds, 13 ounces.

Mike Bush of West Hills, Calif., who made a long run to the upper end of Havasu near Needles, Calif., caught a limit weighing 14 pounds, 4 ounces and placed fourth in the Pro Division.

“I pretty much lay off the sight-fish,” said Bush, who leaned on a jerkbait as his bait of choice. “I started down here in the basin. I was just working the staging fish that were about 15 feet back (from the shallow bedding bass) and throwing a rip-bait. Then I went up to Needles.”

Jason Bryan of Henderson, Nev., placed fifth for the pros with a limit weighing 13 pounds, 13 ounces.

Cindy Collins of Moorpark, Calif., earned $500 as the big-bass award winner in the Pro Division thanks to a 5-pound, 2-ounce bass.

George Diller of Surprise, Ariz., led the Co-angler Division with the biggest limit of the day, 16 pounds, 13 ounces. What’s not surprising is that Diller fished from pro leader Goodwin’s boat Wednesday.

“This is fantastic,” Diller said. “I was lucky to get paired with Mike; he fishes here all the time. I started out by just watching him fish and just ended up doing what he did.”

“Over 32 pounds out of the same boat?” Goodwin added. “That’s a (heck) of a day on a lake without any real big fish.”

The second-heaviest catch of the day went to co-angler phenom Tony Sarkis of Phoenix. Using mainly a Yamamoto jig, he weighed in five bass worth 15 pounds, 13 ounces and placed second.

“Today, I just used a different bait than my boater was using,” said Sarkis, who finished second at Lake Pleasant last month. “It helps to be familiar with the lake, and I’ve pretty much seen the whole lake. I don’t know if I’ll be able to do it again when we head out to the Delta and Clear Lake (in California).”

Diller also caught the co-angler big bass of the day with a 5-pound, 1-ounce bass worth $200.

Day two of Western Division competition at Lake Havasu begins as the full field of 150 boats takes off from Windsor Park at 7 a.m. Mountain time Thursday for the second half of the opening round. Following tomorrow’s action, both fields will be cut to the top 20 anglers apiece based on two-day total weight.