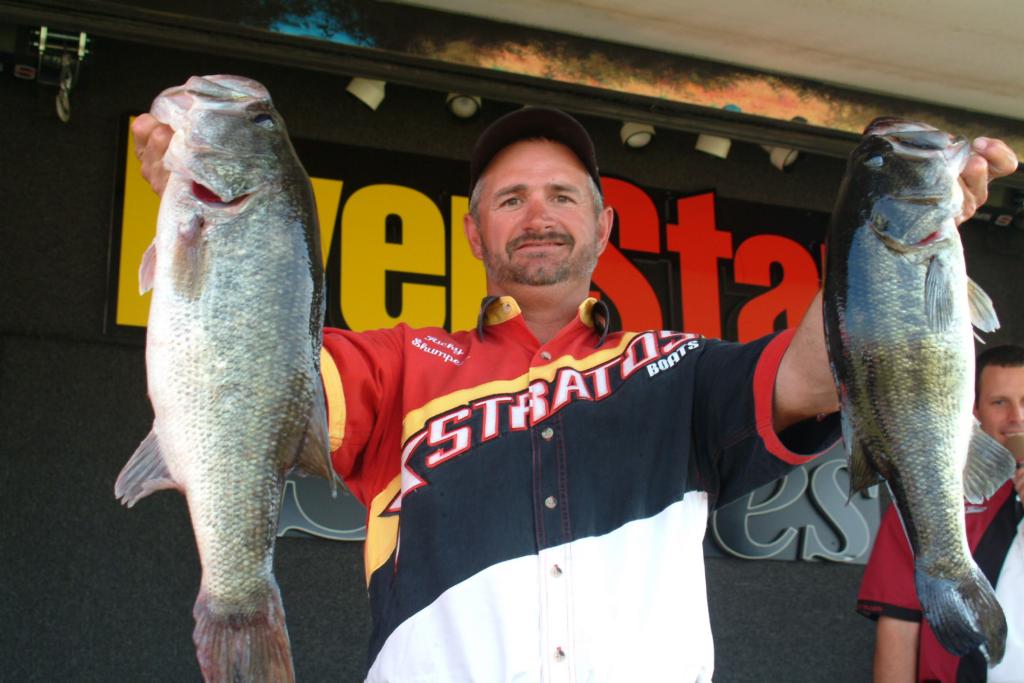 MANNING, S.C. – At the day three weigh-in of the Eastern Division EverStart on Santee Cooper, few were surprised to see Ricky Shumpert of Lexington, S.C., take the lead.

Shumpert is Santee’s shining star and he put himself in a position to win his second Santee Cooper EverStart title Friday by checking in a five-bass limit weighing 18 pounds, 7 ounces.

“I’ve been fishing this lake since I was knee-high,” Shumpert said. “I’m fishing the same places I fish here every year. The key is knowing how to manage the areas so I’m at the right place at the right time.”

Shumpert has used a combination of sight-fishing and casting a Senko around cypress trees to catch his fish this week.

“My biggest fish came off bed today,” he said. “I found her yesterday and, since I already had enough to make the cut, I just guarded her. I went straight to her this morning and she was my first fish.”

“This afternoon I found four or five on bed that I’m going to start on tomorrow,” he continued. “I hope they’re still there in the morning. If not, I’ll just go fishing and see what I can put together.”

Shumpert is fishing the upper lake, Lake Marion, his favorite of the two Santee Cooper lakes.

“I never go through the canal (to the lower lake); they could dam it up for all I care,” he added.

Pedigree pro Greg Pugh of Cullman, Ala., recently sight-fished his way to a third-place finish at the Eastern Division EverStart at Lake Eufaula in March. Now it looks like he will keep banging out bedders at Santee Cooper for another high finish.

“I’ve been in the same area for three days and I just keep finding fish to catch,” Pugh said. “This place has had a lot of pressure, but I’m keying on deep beds in about 4 feet of water. They are hard to see because the water is dingy. I had to really strain my eyes today to catch the ones I caught. Each time I think the place is out of fish, I see another one come in and lock down. Hopefully they’ll continue to come in there tomorrow.”

In third place is Steve Kennedy of Auburn, Ala., with 16 pounds, 7 ounces.

Earlier in the week, Kennedy remarked that he thought he was catching prespawn fish. Today, he confirmed his suspicions.

“This morning I went to some of the places where I had been catching them on deeper trees, and I couldn’t catch anything but little dinks,” Kennedy said. “So I moved up on the bank and discovered the bigger fish had actually moved shallow. I didn’t exactly catch them by sight-fishing, but I know they were up there spawning.”

Couch has a seat in fourth

Tony Couch of Buckhead, Ga., is fishing the upper lake and ended his day in fourth place with 16 pounds, 6 ounces.

Banana Boat pro Kevin Vida of Clare, Mich., continues to work his way up through the field at Santee Cooper. After day one he was in 15th place, on day two he moved to 10th place and today he checked in 15 pounds, 6 ounces to move into fifth place.

Hampson has settled into a pitching pattern behind his pros that has worked for three days.

“I’ve felt comfortable all week,” Hampson said. “I’ve had some really great partners and I feel good about what I’m throwing. I’m excited about fishing with Ricky (Shumpert) tomorrow.”

A pound and 3 ounces behind Hampson is Marty Mixon of Goose Creek, S.C., in second place with 7 pounds, 15 ounces.

“I’ve had to adapt every day this week,” Mixon said. “I look at what the pro is doing and I try to do something a shade different and, so far, it’s worked.”

The final day of competition of the Santee Cooper EverStart begins tomorrow at 7 a.m. at the John C. Land boat ramp.