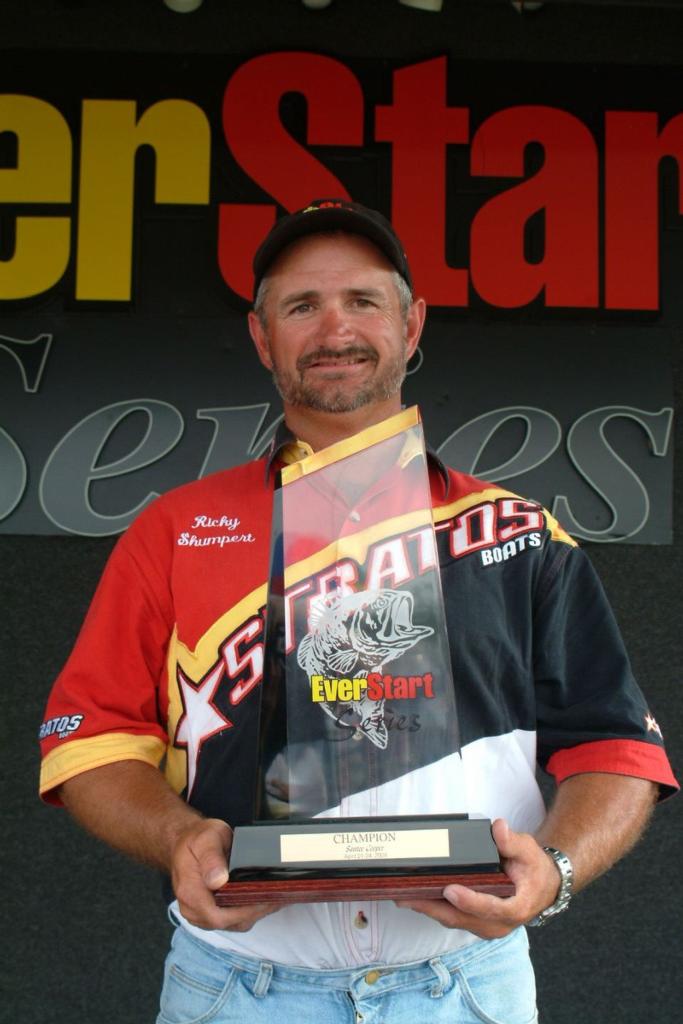 MANNING, S.C. – Ricky Shumpert of Lexington, S.C., added another win to his stellar EverStart record on Santee Cooper today with a two-day total of 38 pounds, 12 ounces.

“This win is more gratifying than my win two years ago,” said Shumpert, who received a fully rigged Ranger boat and $10,000 cash. “Last time, the win kind of fell into my lap. This time I had to really work for it.”

At the start of the tournament, Shumpert underestimated the weights that would be brought in during the week. When he weighed in 16 pounds, 6 ounces the first day and was in 11th place, he knew he had some work to do.

“I was really surprised by how good the lake was fishing,” he said. “I knew I was going to have to step it up to win.”

On day two, he brought in 18 pounds, 12 ounces to insure his ticket to the finals. Then he took the top spot on day three with 18 pounds, 7 ounces. He put an exclamation point on his Santee Cooper domination Saturday with a 20-pound, 5-ounce stringer, which gave him a 6-pound, 11-ounce margin of victory.

“I really don’t know the lake all that well,” Shumpert said. “In fact, I don’t know a thing about the lower lake. But I know one portion of the upper lake really well. Within that part of the lake, I know where the fish stage and spawn.”

Shumpert used a combination of sight-fishing and casting Senkos around trees for his catches throughout the week.

A big key to his win was managing his fish and areas so his weights got stronger as the week went on.

“Each day I would spend the afternoon looking for new fish to catch the next day,” he said. “I could have had well over 20 pounds the second day of the tournament, but once I knew I had the top-20 (cut) made, I saved those bass for the finals and it paid off.”

Tony Couch of Buckhead, Ga., finished in second place with a two-day total of 32 pounds, 1 ounce.

Couch fished a Zoom Z-Nail in junebug and green pumpkin around cypress trees in the upper lake all week.

“The fish were in tight clusters,” he said. “I’d fish the prettiest trees in the world for hours without a bite, and then I’d hit a little group of trees and catch a limit in 30 minutes. It was like that all week. I never knew when I was going to run into a group of fish, but when I did they bit fast.

At the last EverStart Eastern event on Lake Eufaula, Pedigree pro Greg Pugh of Cullman, Ala., finished third by sight-fishing for four days.

Santee Cooper was deja vu all over again as Pugh finished third with a two-day total of 31 pounds, 8 ounces by sight-fishing.

“The key for me was finding deeper beds and moving around real slow in my areas,” Pugh said. “A lot of guys would come blasting through there with the trolling motor on high, and I think it would spook the fish. I just crept around slowly trying to make very little movement in the boat to avoid spooking the fish.”

Another Pedigree pro, Steve Kennedy of Auburn, Ala., finished fourth with a two-day total of 30 pounds, 8 ounces.

Kennedy fished a Kinami Flash in watermelon on 10-pound-test line around cypress trees for most of his catches.

“I’d just throw to a tree, let it go to the bottom, and if one didn’t swim off with it, I’d throw to the next tree,” he said. “I fished a different area of the lake each day, but I stuck with the same pattern everywhere I went.”

Vida relied on Berkley Power Jigs in green pumpkin and Hildebrandt spinnerbaits in white for his catch on Santee Cooper.

“I was fishing the spinnerbait on docks and sight-fishing beds with the jig,” he said. “I fished in Wyboo Creek all week and just kept covering as much water as possible each day.”

Pedigree pros Greg Pugh and Steve Kennedy are on an EverStart roll. Both pros have made the top-20 in the last two EverStart Eastern Division events.